Democracy 2.0: Returning power to the people

Americans are growing more and more politically polarized on controversial issues like immigration, health care, gun control and women’s rights. A recent report from the Pew Research Center indicates that “public opinion remains more divided along partisan lines than along the lines of race, religion, age, gender or educational background.”

The number of Americans who seek out social media sites as their primary source of news is also growing. Those sites are often blamed for increasing polarization by creating “echo chambers” that reinforce existing beliefs and limited exposure to contradictory views, but several studies have found that it’s not quite that simple. 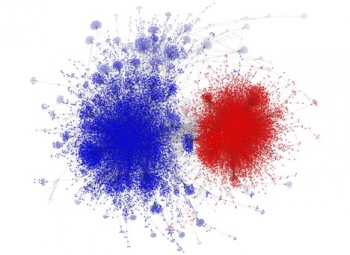 A recent report from the Pew Research Center indicates that “public opinion remains more divided along partisan lines than along the lines of race, religion, age, gender or educational background.” Download Full Image

So, what is it going to take to move toward a way of digesting information and making decisions that can overcome extreme partisan division?

An interdisciplinary approach involving biologists, neuroscientists and computational mathematicians is surfacing some answers.

This year’s “Dialogues in Complexity” lecture series — a partnership between Arizona State University and Princeton University — will focus on “Dynamics of Political Polarization.” The lectures will explore disruptive forces in U.S. elections and ways in which partisanship and information gerrymandering can be understood and overcome.

On Jan. 6, Sam Wang, Princeton University professor of neuroscience, will discuss “Bugs in Democracy: Fair Maps, Gerrymandering and the Road to Majority Rule in America.”

Joshua Plotkin, the Walter H. and Leonore C. Annenberg Professor of the Natural Sciences at University of Pennsylvania, will also discuss “Information Gerrymandering and Undemocratic Decisions.”

The lectures will take place from 3 to 5:30 p.m. at the Biodesign Institute Auditorium. The event is free and open to the public.

According to Stephanie Forrest, director of ASU's Biodesign Center for Biocomputing, Security and Society and professor in the School of Computing, Informatics and Decision Sciences Engineering, “social media have dramatically reshaped public discourse and altered collective decision-making in ways that we are only beginning to comprehend.”

“Regardless of your political persuasion, it is important to understand the role that gerrymandering plays in these outcomes and what steps might be taken to mitigate its effects,” Forrest said.

Bug fixes for democracy: Fair maps, gerrymandering and the road to majority rule in America

According to Wang, “In 1 out of 3 close U.S. presidential elections, the popular-vote loser is selected.”

Wang’s research asks, “What governs the dynamics of ideological polarization, social norms, the evolution of communication systems, and the spread of (mis)information in human societies?”

He aims to level the redistricting playing field in the U.S. through his Princeton Gerrymandering Project. His lecture will provide an overview of how “a democracy should be responsive to changes in voter preference and the majority be able to convert its preferences to power.”

The talk will discuss how the United States currently has neither feature at a national level.

According to Wang, “gerrymandering amplifies the effects of human geography with larger representational impact than incomplete census data or voter suppression. The American presidential election process has drifted far from the founders’ original design. These flaws in ‘Democracy 1.0’ are reparable by federalist principles and state-by-state action. ‘Democracy 2.0’ will be constructed by citizens, reformers and a clear quantitative understanding of how rules and consequences are connected.”

According to Plotkin, “many Americans receive their news and form political opinions through social media. But social media platforms are not shaping up to be the utopian spaces for human connection their founders once hoped. Instead, the internet has introduced phenomena that can influence national elections and even threaten democracy.”

Plotkin’s talk “will describe recent findings on information gerrymandering — how the structure of a social network can profoundly bias collective decisions. Evidence of these effects is found in large-scale human experiments, real-world social media networks and networks of legislative actions in the U.S. Congress. These results motivate questions about policy.”

Dialogues in Complexity involves public lectures and in-depth working groups. “The program leverages the power of interdisciplinary perspectives, from ASU, Princeton and elsewhere, to tackle some of the biggest problems confronting humanity,” said Levin, who is also a visiting professor at ASU.

Both seminars are part of the ASU-Princeton Dialogues in Complexity series, led by Simon A. Levin in partnership with Forrest, Andrea Graham and Ann Kinzig. Levin is the James S. McDonnell Distinguished University Professor in Ecology and Evolutionary Biology at Princeton University and the namesake of ASU’s Simon A. Levin Mathematical, Computational and Modeling Sciences Center. Kinzig is a senior sustainability scientist with ASU’s Julie Ann Wrigley Global Institute of Sustainability and a professor in the School of Life Sciences. Graham is professor of ecology and evolutionary biology at Princeton.

Season's Greetings for #14/16 Hockey from Omaha

ASU and Omaha meet for the 9th and 10th time in program history ...

Season's Greetings for #14/16 Hockey from Omaha