Olga Hart’s journey to a doctoral degree started as an undergraduate civil engineering major in the Ira A. Fulton Schools of Engineering. 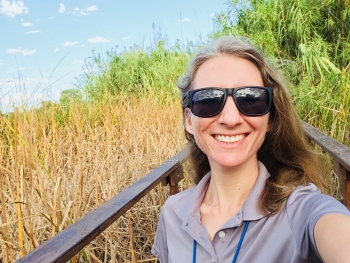 In her time as an undergraduate at ASU, Hart was a Research Experiences for Undergraduates student researcher with the Central Arizona-Phoenix Long-Term Ecological Research (CAP LTER) project, interned at Lawrence Berkeley National Laboratory, and worked for ASU’s Sustainability Solutions Extension Service.

“That initial experience with CAP LTER put me on the path to hydrology, research, graduate school and numerical modeling,” Hart said. “I can’t say enough good things about undergraduate research opportunities, or about my first research mentors, Drs. Laura Turnbull, Steven Earl and Dan Childers. They set me up to succeed in graduate school and be able to take advantage of the opportunities afforded by my research advisor and mentor, Dr. Rolf Halden.”

Hart views water management as a major issue that needs to be addressed to help secure a sustainable future and this has guided her doctoral research.

“If I were to dream up a big reach goal for water resources engineers in my lifetime, it would be to balance the water cycle,” Hart said, “so we can avoid ‘wasting’ water on floods at the same time as other parts of the world are suffering from drought, and vice versa.”

Hart, who has a professional engineer license in civil engineering, currently works for the Arizona Department of Water Resources in the groundwater modeling section and plans to continue after graduation.

“I plan to continue modeling environmental resource problems, helping us understand and better allocate these finite resources,” Hart said. “Modeling has played such a large role in my academic and professional work. I would love to be part of a push at ASU to the introduction of numerical modeling into the undergraduate curriculum.”

Outside of her plans to continue working with the Arizona Department of Water Resources, Hart would love to provide a safe place for animals.

“I would like to run a sanctuary for short and round animals with my husband, a fellow ASU engineering PhD and soon-to-be alum,” Hart said about her plans to help donkeys with her husband, Steven.

She encourages those still in school to not lose sight of their future after graduation.

“For better or for worse, school ends and the rest of your life begins,” she said, “so try to see the school portion accordingly.”

Read about other exceptional graduates of the Fulton Schools’ fall 2019 class here. 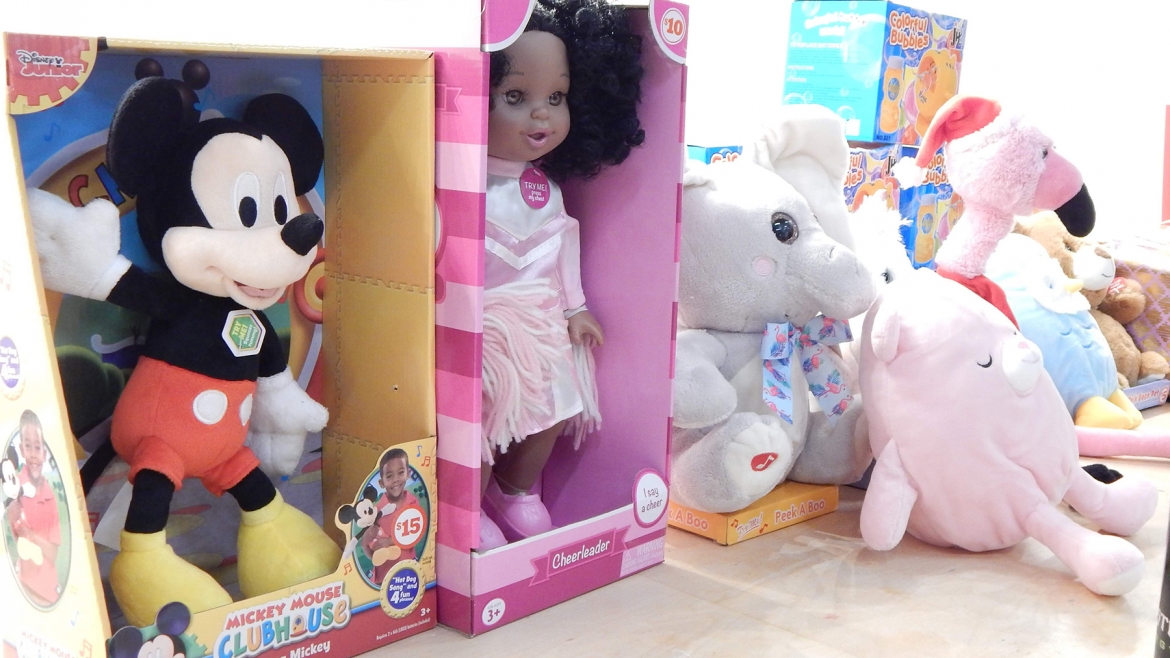 Arizona State University's Desert WAVE and a high school team from Chandler, Arizona, called Degrees of Freedom, joined forces last weekend at CREATE at the Arizona Science Center, to “hack” toys for children with disabilities. Both teams were founded by the local Si Se Puede Foundation.

“When I look at the kids that we are able to help, I see just that: kids,” said Desert WAVE member Jessica Dirks, an ASU sophomore with a double major in human systems engineering and robotics. “They have hopes and dreams and love toys just as much as I do. The only thing separating us is the size of a switch — and that is something I am confident and capable of changing for these fellow dreamers.”

While commercially adapted toys exist for children with physical limitations, they can cost up to four times the retail cost of similar, off-the-shelf toys. The adaptations made during the event cost less than $5 in parts and required basic electrical skills, like soldering, provided by the two teams.

The modified toys help children develop functional skills like problem-solving, offer a foundation for socialization, and perhaps most importantly, have fun with toys.

“My favorite moment of this event was right after I finished adapting my first toy,” said Khushi Parikh, a sophomore at Gilbert Classical Academy and part of the Degrees of Freedom team. “When I tested the toy with the adapted switch, and it lit up, I felt really proud and humbled, too, because that simple mechanism could have a profound impact on someone's life. Seeing the toy in action helped me fully realize that.”

According to Daniel Frank, an Ira A. Fulton Schools of Engineering faculty member and Desert WAVE’s adviser, the teams developed and built external push-button activators for the toys.

The hackers opened the toys, which sometimes required cutting stitches in fabric, and found the two wires that lead to the button that activates the toy. They stripped the wires and attached them to an audio jack, similar to what you use to plug in your headphones. The jack can be plugged into a large button switch that can be manipulated more easily — with an elbow, a fist or a head bop, for example — than activating a tiny sensor that requires manual dexterity some children do not have.

“This holiday hack gave me the chance to bring joy to a child that I may have never connected with otherwise,” said Andrea Schoonover, an ASU engineering junior. “I mean, what could be a better use of my time?"

Once the toys were tested, they were sewn back up and wrapped, ready to be delivered by ACCEL, the event’s co-sponsor with Makers Making Change and CREATE at Arizona Science Center.

“I enjoyed being able to put my engineering skills to use while knowing it was helping others,” said Desert WAVE’s Noella Mikanda, a human systems engineering major. “Being able to work with younger girls with a passion for engineering was just the icing on top of the cake,” she said about the opportunity to work with the high school members of Degrees of Freedom. 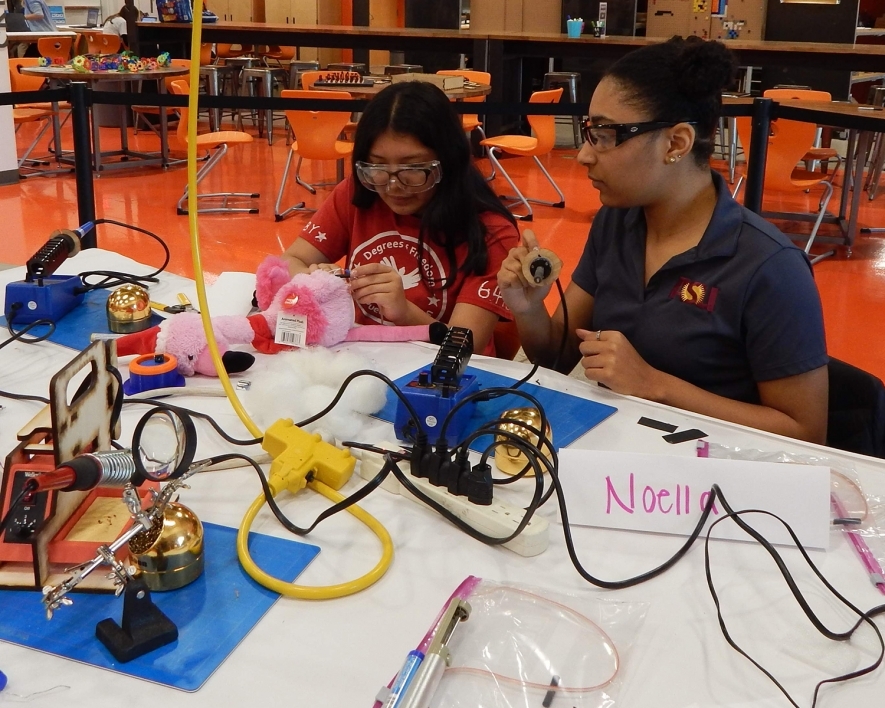 Maria Estrada of Degrees of Freedom and Noella Mikanda of Desert WAVE work on modifying a dancing flamingo toy. 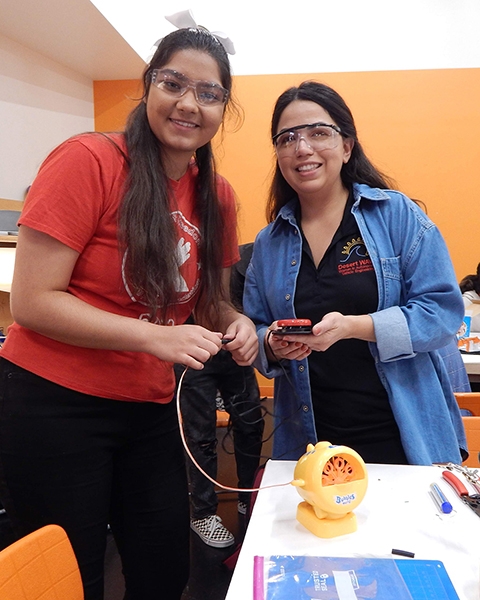 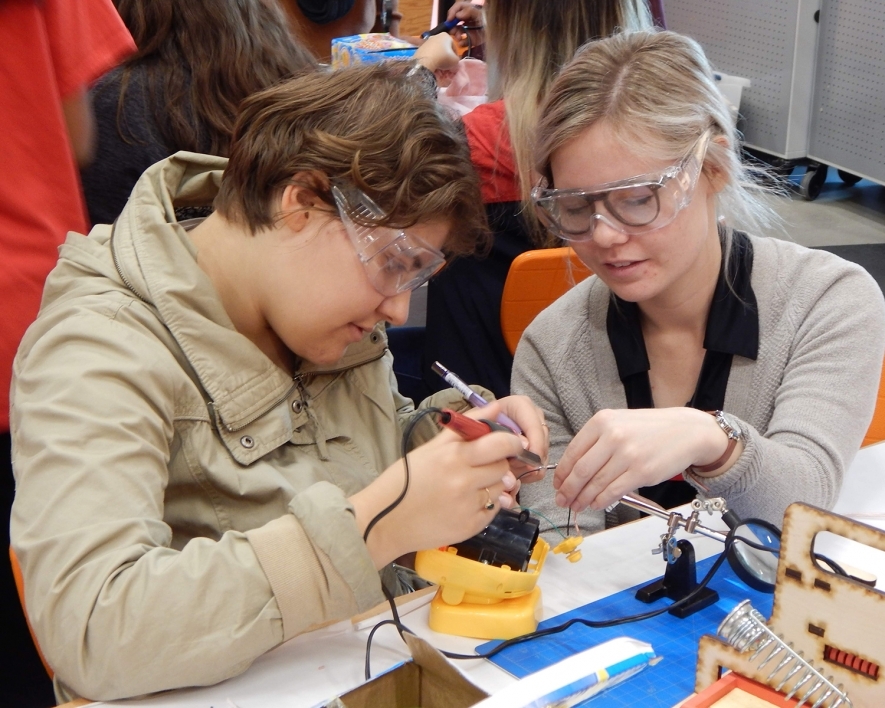 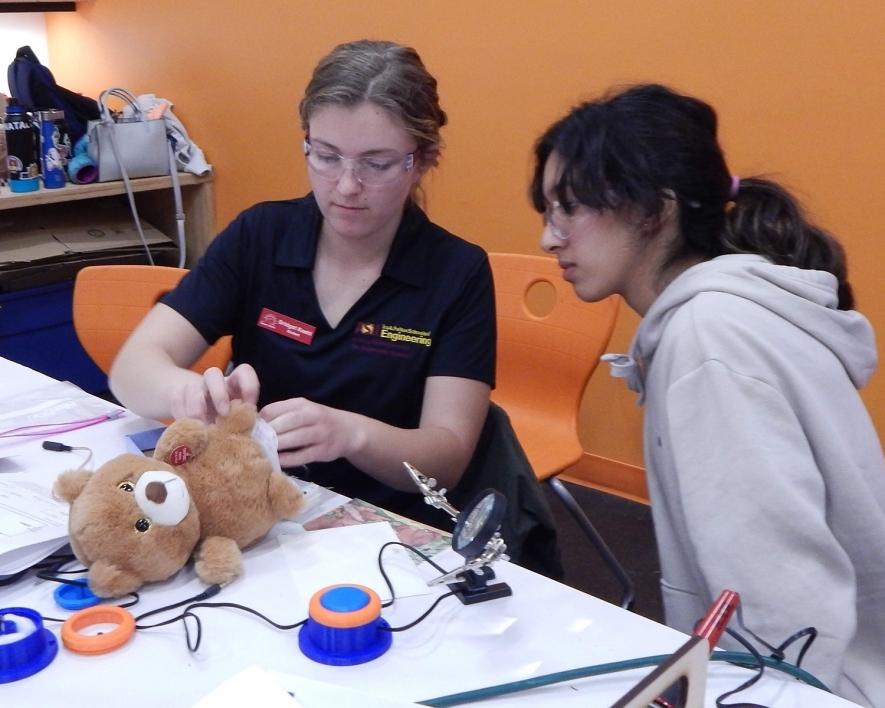 Bridget Koehl, Desert WAVE, and Gaby Hernandez, Degrees of Freedom, strategize on the best way to adapt a stuffed bear. 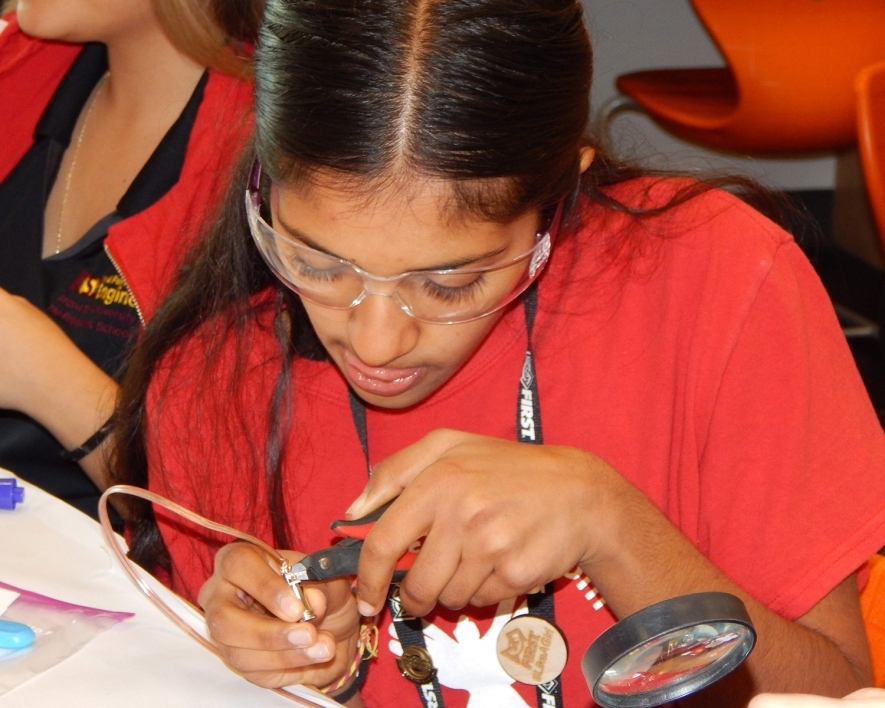 Khushi Parikh from Degrees of Freedom works on the wiring for a 3D-printed switch. 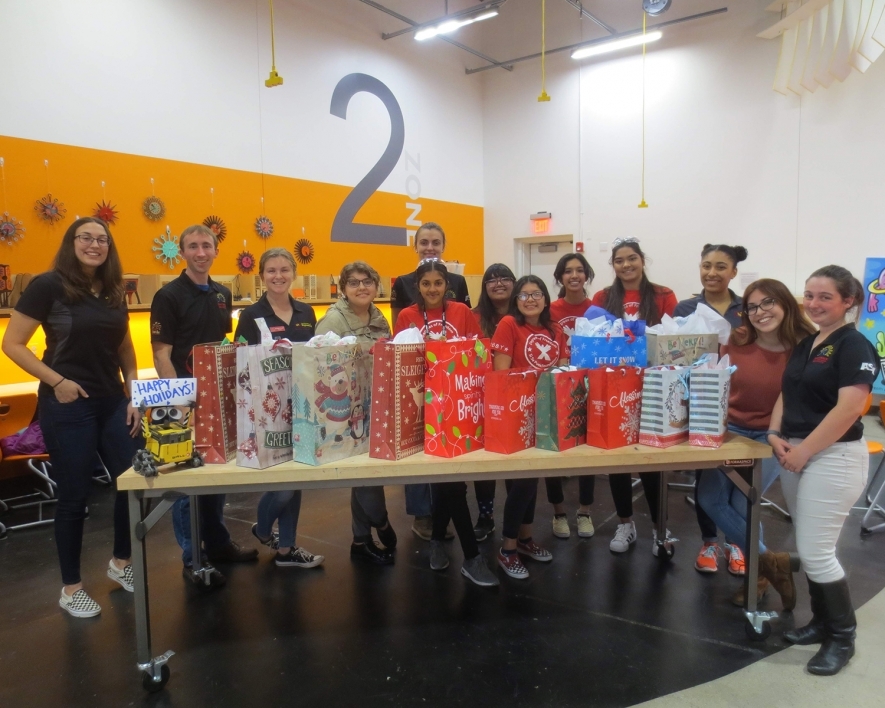 Degrees of Freedom members enjoyed the collaboration, as well.

“I thoroughly enjoyed working with Desert WAVE during the hackathon,” Parikh said. “The ladies are all very bright, and apart from being great mentors and engineers, they gave me an insightful perspective on life as an ASU student. From ensuring that I understood each step of the adapting process and the function of the different tools we used, to joking around with us at lunch, our big sister team made me feel included, involved and valued.”

The mentoring wasn’t in just one direction —the Desert WAVE team learned a few things from the younger roboticists, too.

“My favorite part of working with Degrees of Freedom was trading soldering advice,” said Isabella Bushroe, an ASU engineering sophomore. “The girl I worked with, Natali Rodriguez, was much better at modifying the headphone jacks than I was, so I learned some tricks from her, and it was fun to get to know her along the way.”

“I just want to give a quick shout out to everyone involved in Degrees of Freedom, Desert WAVE and Si Se Puede for everything they do," said Laura Roty, a Desert WAVE member and human systems engineering major. "The mentors especially have made so many wonderful opportunities, like Holiday Hack, open to me and to so many other passionate young people.

“Growing up, I never felt that I could involve myself in engineering but these wonderful programs have made me feel like I truly belong on the path that I have chosen!”

Top photo: ASU’s Desert WAVE and Degrees of Freedom, a robotics team from Chandler, Arizona, teamed up to transform interactive toys for use by handicapped children. Photo courtesy Daniel Frank.