Bianca Navia, a junior at Arizona State University pursuing a double major in political science and global studies, has been awarded a Killam Fellowship to the University of Ottawa for 2019-20.

The Killam Fellowships Program brings exceptional undergraduate students from universities in the United States to Canada as exchange students. Navia, whose academic interests fall under Middle Eastern politics, counterterrorism, national security policy and migration, will be studying at the University of Ottawa. 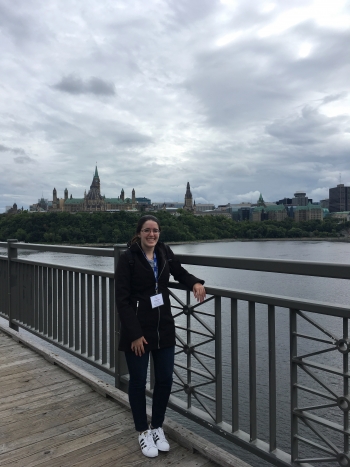 Navia thanks her interest in international affairs to growing up so close to the diverse city of Houston, which exposed her to various languages and cultures at an early age.

“I always felt drawn to study political science because I loved to read, write, study foreign languages and keep up with current events,” she said.

Navia developed an interest in the Middle East during her freshman year at ASU when she started tutoring Syrian refuges online through the nonprofit program Paper Airplanes. Hearing about the recent politics and events in the region from her students firsthand was an enlightening experience for her.

This fall, she was also a participant in the School of Politics and Global Studies’ Junior Fellows program under the mentorship of Assistant Professor Valerie Mueller.

“(The Junior Fellows program) was an excellent experience to hone my research skills and contribute in a meaningful way to a research project about migration in Mali,” Navia said.

When applying to the Killam Fellowship, School of Politics and Global Studies Senior Lecturer Henry Sivak agreed to be one of her recommenders. Sivak was the first faculty member that Navia had conducted research with. As a freshman, she would complete an honors contract with Sivak on the 1915 Armenian genocide.

“I have found the faculty within SPGS to be incredibly supportive in helping me achieve my academic goals and providing me with opportunities to conduct research that truly interests and challenges me,” Navia said. 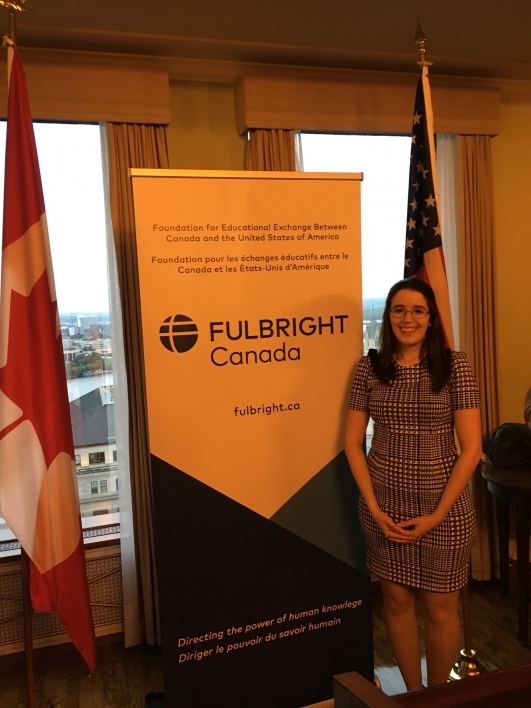 Navia visiting the Rideau Club during her Killam Fellowship orientation.

Motivated from her work with Syrian refuges, Navia chose to apply to the Killam Fellowship because she was interested in Canada’s Private Sponsorship of Refugee Program. According to Navia, this resettlement model is unique to Canada and has contributed to tens of thousands of refugees resettling there over the last few years.

“As a Killam Fellow, I want to gain a more in-depth look at Canada’s Private Sponsorship of Refugees program, as well as volunteer in my local Ottawa community to aid in Canadian refugee resettlement efforts,” she said.

In September, Navia completed the fall orientation for the fellowship in Ottawa, where she met with other Killam Fellows as well as Fulbright Scholars. The group of students listened to panel discussions, visited the Canadian Supreme Court and Canadian Museum of History, went on an indigenous walk tour and even played hockey.

Navia will be spending her entire spring semester in Canada for the program.

“I am really excited about exploring Ottawa and taking advantage of the many opportunities in the city and at my host university, the University of Ottawa,” she said.

Editor’s note: This is part of a series of profiles for fall 2019 commencement.Not all Sun Devils have two legs. Throughout the academic year, groups like Sparky’s Service Dogs, the Psychology Engagement Team, and Sun Devil Paws help the Arizona State University community de-stress by interacting with trained service dogs.Gillian Bryant, who is the Dean’s Medalist for the Department of P... 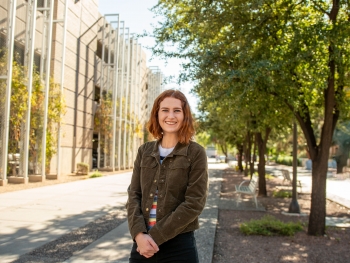 Gillian Bryant, who is the Dean’s Medalist for the Department of Psychology, wondered about how dogs help college students relax.

Bryant joined ASU’s Canine Science Collaboratory and started a research project to answer the question: Do dogs themselves cause a therapeutic effect, or is it caused by something else like novelty?

“Therapy animals seem to help, and I wanted to know if the animals themselves confer relaxing effects,” Bryant said. “I also wanted to investigate whether the novelty of the experience or the use of touch was contributing to relaxation.”

Bryant designed an experiment to compare interacting with a therapy dog event to receiving a massage. There were three groups of participants: a control group who read an article and two experimental groups that interacted with the therapy dogs or had a massage. Bryant had participants report their stress levels and she measured stress levels through heart rate variability with a heart rate armband. Massages were a good comparison because they were novel and involved touch, similar to how people interact with therapy dogs.

The stress levels of all the participants decreased, regardless of whether they interacted with a therapy dog, received a massage or read the article.

“My findings could be a result of demand characteristics, where people respond the way they think the researcher wants them to, but it’s also possible that these university stress-reduction events really help, regardless of what they offer,” she said.

Bryant said she really enjoyed working on her senior thesis and also from the opportunity to connect with the Sun Devil Fitness Center and Sun Devil Paws.

When she found out about the opportunity to work in canine cognition, she leapt at it.

“A lot of students are attracted to working with dogs because it sounds like fun — which it is — but it actually takes a lot of persistence to carry out a successful honors project. Gillian made life extra difficult for herself by initiating research into the benefits of therapy dogs — something I had never looked into before. All the more kudos to her then for completing such an interesting study. It is great to know that dogs really can help stressed out students,” said Clive Wynne, professor of psychology and director of the Canine Science Collaboratory.

In addition to working in the Canine Science Collaboratory, Bryant also worked in the Learning and Development Lab, led by Viridiana Benitez, and as an instructor at the Phoenix Zoo, helping kids foster a love for animals that aren’t traditionally adored, like cockroaches or scorpions.

“When I heard about Gillian winning the Dean's Medal, I was not surprised. For the time that I've known Gillian, first as a student in my class, and then as a research assistant in my lab, she has shown perseverance, a strong work ethic, and a drive for learning,” said Benitez, adding, “Gillian is also very insightful and intellectually curious, and I have no doubt she will be successful in her future endeavors.”

Answer: I started college as a theater major. I loved acting but realized I didn’t want to pursue it as a career. In trying to figure out where to go next, I reflected on what drew me to acting in the first place. I realized it was the depiction of human behavior and problems. It was understanding a character in a script and empathizing with her so I could portray her on stage. Acting allowed me to explore the human experience. People are conglomerations of interdependent inborn predispositions and life experiences. The life of just one person is so complex. That’s what fascinated me about theater and what ultimately led me to psychology where I was able to directly study people.

A: I took the History of Ideas with Dr. Parker my first semester at ASU, and it really affected me. One essay in particular asked us to argue whether or not there is a self. While I had vague ideas about this, I’d never explored them. In the essay, I concluded that there is no permanent, unchanging core self, instead, people are ever-changing hodgepodges of nature and nurture. People, then, aren’t inherently good or bad but inherently complex. Dr. Parker’s class helped me to form this philosophy, and it is why I love psychology. This way of thinking affects how I interact with people and allows me to be more compassionate.

A: I grew up in Tucson but moved up here after high school. I attended Scottsdale Community College, and transferring over to ASU was an easy choice. Mainly, I wanted to stay near my dad and friends while paying in-state tuition, but I was also interested in research. ASU is one of the best research universities in the country.

A: Pursue whatever you’re interested in, even if it’s not what you’re “supposed” to be doing for your career. College is a unique opportunity to explore. Whatever you pursue will help you get where you want to be, even if it changes where you want to be! For example, I knew I wanted to be a therapist but I worked at the Phoenix Zoo as an educator for two years just because I loved it. I learned so much about kids and realized that I wanted to specialize in working with them. Nothing you’re interested in is a waste of time.

A: I’ve spent the majority of my free time on campus in the Learning and Development Lab’s waiting room. When I’m not in class, I’m usually there. I also like those single-person study rooms in Noble.

A: I’m planning on taking a gap year to work with children in a behavioral health hospital. I want to make sure I know what I’m getting into before I spend time and money on grad school. After my gap year, I might pursue a doctorate in clinical child and adolescent psychology or a master’s in social work. The ultimate goal is to become a therapist to help children and adolescents.

A: The biggest existential threat to humanity is global warming, so I’d devote my $40 million to tackling this problem. I’d direct the money to support existing technologies to mitigate global warming and help people and animals affected by it. However, most of global warming is driven by multibillion-dollar companies so I would also use this money to fight for structural change to combat corporate greed.