The growth in Arizona’s economy is slowing but the outlook remains strong for 2020, according to Arizona State University’s economic outlook expert.

“We have enjoyed a robust recovery — somewhat slow to get started but since then proceeding at a good clip,” said Lee McPheters, research professor of economics and director of the JPMorgan Chase Economic Outlook Center at ASU. He spoke at the 56th annual Economic Forecast Luncheon held Wednesday by the W. P. Carey School of Business.

“Construction is important in a growth state like Arizona, but Arizona is also a top 10 state for transportation and warehousing, science and technology, manufacturing and health care,” he said. “We have a diverse structure of growth now. It’s not all real estate and construction.”

McPheters noted three interesting factors in the long-term view of the state economy.

With the U.S. economy, consumers are more optimistic about next year than businesses, according to Bart Hobijn, professor of economics in the W. P. Carey School.

“Consumers like what’s going on in the economy,” he said. “They’re feeling good, and that’s because income is growing.” 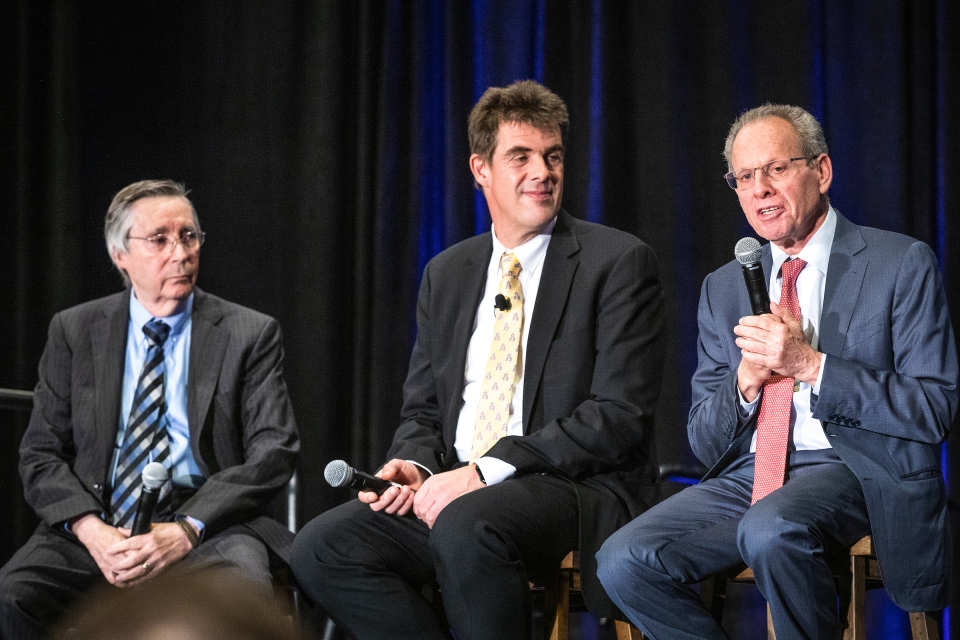 He noted that the 3.5% growth in wages nationwide is not “gangbusters” but is positive after years of stagnation.

“There seems to be a lot of talk about income inequality, but wages for low-skilled workers have risen over the last few years and that’s because of scarcity,” he said. “By now, most of people willing and able to work have been hired.”

Hobijn said that businesses are expressing less confidence in the economy because of uncertainties over the Trump administration’s trade policies.

“And if you survey CEOs, they’re even more negative because they also consider the global economy, which looks worse,” he said.

The trade wars are a risk to economic growth in the U.S., according to Robert Barro, the Paul M. Warburg Professor of Economics at Harvard University, who spoke at the event.

He cited President Donald Trump’s quote in 2018: “Trade wars are good and easy to win.”

“It’s a very upsetting thing to say from the perspective of an economist,” he said. “Trump’s statement reminds me of what Nixon was most guilty of — not Watergate but price controls. I think that was the biggest crime that Nixon committed, and if you ask me about Trump, I would say the same thing about the trade wars.”

The administration is driven by the idea that exporting is good and importing is bad, rather than the two being halves of an economic engine that’s measured by overall volume.

“The irony of this is that the Chinese also think it’s good to sell us lots of stuff and not buy anything, so there’s consensus in a perverse vision,” he said.

Barro said that the U.S. and China were reportedly close to a trade deal several months ago, but it didn’t happen.

“The Chinese can’t trust the Trump administration to stick to the terms of a deal that the Chinese might agree to,” he said.

Sun Devil Football season tickets are now available for the 2020 season. Season ticket holders may renew on their online account manager while new season ticket deposits can be made online or by calling 480-727-0000. ... Sun Devil Football season tickets are now available for the 2020 season. Season ticket holders may renew on their online account manager while new season ticket deposits can be made online or by calling 480-727-0000.