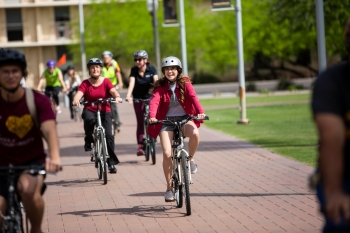 School of Sustainability and urban planning undergraduate student Danielle Vermeer rides her bike to work along with other students and staff on the Tempe campus on April 4, 2019. Photo by Deanna Dent/ASU Now Download Full Image

The university achieved these reductions while increasing on-campus population by 30.5% and expanding campus buildings by more than 40%.

“The reduction in carbon emissions was accomplished through energy efficiency, renewable energy and transportation changes,” said Mick Dalrymple, director of ASU University Sustainability Practices. “Our progress has been made possible through collaborative action across the university and beyond. Teams have designed and constructed new buildings to be highly energy efficient, as well as extensively retrofitted existing buildings. Students have led the charge on cutting commuting emissions by taking up biking, walking and lightrail, and moving onto campus in new residence halls or nearby.“

ASU has a goal of achieving carbon neutrality by 2025 when it comes to campus buildings and the ASU vehicle fleet, Dalrymple said.

“By 2035, we’re aiming for carbon neutral commuting and air travel. We are continuously exploring opportunities for new types of clean energy, more efficient technology, new modes of working, more efficient use of space and the planting of more trees in concert with Phoenix and Tempe.”

In addition to being recognized for reducing net carbon emissions, ASU received additional Marks of Distinction from Second Nature for action in these categories: 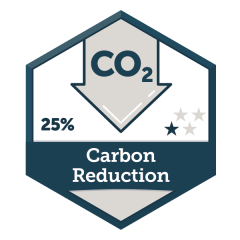 Marks of Distinction is an initiative of the Climate Leadership Network, which is comprised of U.S. colleges and universities that are taking action on climate change and preparing students to do the same through research and education. Many of those colleges and universities sign formal commitments to climate leadership. These commitments are a signature program of Second Nature and can include a Carbon Commitment (focused on reducing greenhouse gas emissions), a Resilience Commitment (focused on climate adaptation and building community capacity) or a Climate Commitment that integrates both. ASU is a founding signatory of the original Carbon Commitment and the expanded Climate Commitment.

“Climate change is the most critical issue of our time and ASU will continue to serve as an example of aggressive climate progress, while developing research solutions and training the next generation of leaders to be resilient and solve this incredible global challenge,” Dalrymple said. “To be a Sun Devil is to be sustainable."

ASU professor named fellow of the National Academy of Inventors

Professor John C. H. Spence, a Richard Snell Professor of Physics at Arizona State University, jointly appointed at Lawrence Berkeley National Laboratory in Berkeley, California, and a faculty member of the Biodesign Center for Applied Structural Discovery, has been named a fellow of the National Academy of Inventors. Election to NAI Fellow status is the highest professional accolade bestowed...

ASU professor named fellow of the National Academy of Inventors

Professor John C. H. Spence, a Richard Snell Professor of Physics at Arizona State University, jointly appointed at Lawrence Berkeley National Laboratory in Berkeley, California, and a faculty member of the Biodesign Center for Applied Structural Discovery, has been named a fellow of the National Academy of Inventors.

Election to NAI Fellow status is the highest professional accolade bestowed solely to academic inventors who have “demonstrated a spirit of innovation in creating or facilitating outstanding inventions that have made a tangible impact on the quality of life, economic development and welfare of society.” 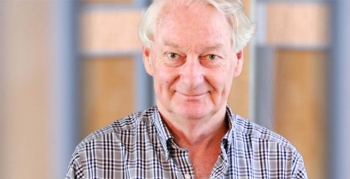 Professor John C. H. Spence, a Richard Snell Professor of Physics at ASU, jointly appointed at Lawrence Berkeley National Laboratory in Berkeley, California, and a faculty member of the Biodesign Center for Applied Structural Discovery, has been named a fellow of the National Academy of Inventors. Download Full Image

“I am delighted to see John recognized with this prestigious honor,” said Sethuraman Panchanathan, executive vice president, ASU Knowledge Enterprise and chief research and innovation officer. “His expansive body of work exemplifies his lifelong commitment to innovation, invention and scholarly pursuits. He is richly deserving of fellowship in the NAI.” Panchanathan himself is a fellow and also vice president for strategic initiatives and membership of the National Academy of Inventors.

According to Spence’s collaborator, Petra Fromme, “the breakthrough concepts, theory and methods for studying biomolecules with the X-ray free-electron lasers that John Spence and our team at ASU have pioneered have initiated a stream of breakthrough discoveries in structural biology with huge, innovative impacts for society.” Fromme explained that “unraveling how plants convert light into chemical energy, split water and evolve all the oxygen that we breathe will lead to clean energy for generations after us.

"John's work also has a huge impact in medicine and paves the way for novel concepts for structure-based drug design,” she said. Fromme is the director of the Biodesign Center for Applied Structural Discovery and Regents Professor in the School of Molecular Sciences.

"It's a great honor to be associated with the luminaries of NAI,” Spence said. “Within my group, we have always believed that discoveries in science follow the invention of new instrumentation, and ASU's support for this over the years has been critical." The 2019 NAI Fellows will be inducted at the Heard Museum in Phoenix as part of the ninth annual NAI Meeting on April 10, 2020.

Spence’s work has made a far-reaching positive impact on society. In particular, electronic recording of transmission electron microscopy images has impacted the lives of millions of people since Spence's 1982–88 papers. The papers greatly facilitated the identification of viruses in medicine, while providing images of atomic arrangements in new materials.

In addition to his scientific contributions, Spence is a dedicated professor and mentor. He is also director of science for the National Science Foundation Science and Technology Center for application of X-ray lasers to biology. A talented and innovative inventor, Spence currently holds six U.S. and international patents, with an additional nine patents pending.

Recently, Oxford University Press published Spence’s book, “Lightspeed: the Ghostly Aether and the Race to Measure the Speed of Light,” a book that “tells the history of science from the perspective of the personal histories and details of the great scientists who measured the speed of light.”

In 2015, Spence was named a fellow of the Royal Society, “a self-governing fellowship made up of the most eminent scientists, engineers and technologists from the U.K. and the Commonwealth. Fellows and foreign members are elected for life through a peer review process on the basis of excellence in science.”

To date, NAI Fellows hold more than 41,500 issued U.S. patents, which have generated over 11,000 licensed technologies and companies, and created more than 36 million jobs. In addition, over $1.6 trillion in revenue has been generated based on NAI Fellow discoveries.

The 2019 fellow class represents 135 research universities and governmental and nonprofit research institutes worldwide and collectively holds over 3,500 issued U.S. patents. Among the 2019 fellows, there are six recipients of the U.S. National Medal of Technology & Innovation or U.S. National Medal of Science and four Nobel laureates. Their collective body of research covers a range of scientific disciplines including neurobehavioral sciences, horticulture, photonics and nanomedicine.

Laura A. Peter, deputy under secretary of commerce for intellectual property and deputy director of the United States Patent and Trademark Office, will provide the keynote address for the induction ceremony. At the ceremony, fellows will be formally inducted by Peter and NAI President Paul R. Sanberg in recognition of their outstanding achievements.