Tropical forests are the most biologically diverse ecosystems on our planet, harboring an estimated 3 million to 50 million species. They’re also highly functionally diverse, meaning that each species has specific characteristics, or functional traits, allowing it to perform a unique and important role. For example, an important functional trait for trees is the amount of photosynthesis-performing chlorophyll contained in leaves. This trait quantifies how well the tree captures sunlight and is useful for predicting how well or how poorly the tree might survive in different environments.

When tropical forests lose key tree and plant species, such as from climate-change-induced drought, the functional diversity of the system decreases, diminishing its ability to store carbon and cycle nutrients. This impairment can lead to an increase in the amount of carbon in the atmosphere, and atmospheric carbon is a major driver of climate change, thus perpetuating a vicious cycle. Given that tropical forests store 20% of the world’s carbon, understanding how climate change will impact these functionally diverse systems is important for monitoring and predicting the ebbs and flows of the global carbon cycle. 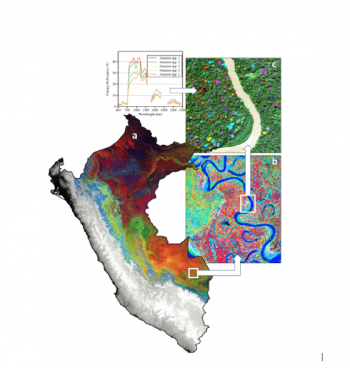 However, calculating an entire forest’s functional diversity isn’t an easy task. Historically, measuring functional traits for trees meant doing extensive fieldwork, and measuring varying traits tree by tree. But with the Amazon rainforest harboring well over 300 billion trees, in order to estimate a given forest’s functional diversity, scientists were forced to analyze small plots of trees and extrapolate their measurements for the entire forest — a problematic approach due to inaccuracies in the data.

Over the past 15 years, Greg Asner, director of the Arizona State University Center for Global Discovery and Conservation Science (ASU-GDCS), and Robin Martin, an associate professor of geography in the School of Geographical Sciences and Urban Planning, have overcome these limitations by taking a bird’s-eye view of forests.

The team takes flight in the Arizona State University Global Airborne Observatory (ASU-GAO), a research aircraft carrying instruments used for performing Spectranomics. Spectranomics is an approach pioneered by Asner and Martin that produces complex maps of a forest’s functional traits by linking the light, or spectra, reflected from tree canopies to tree functional traits, such as the amount of water, chlorophyll and nutrients contained in the leaves.

Now, scientists from the University of Arizona are using Asner and Martin’s maps of functional diversity to improve carbon cycle models.

“Our plant-canopy chemistry maps have been used for many purposes over the past 10 years, but this new application — to assess drivers of forest carbon cycling — is new and opens doors for the use of our mapping approach throughout the world’s tropical forests,” said Asner, co-author of the study published in Science Advances on Dec. 4.

In the new study, the researchers explored an elevation gradient extending from the low-elevation Amazon basin to the high-elevation Andes Mountains in Peru. The range was chosen because the environmental conditions along this elevation gradient vary greatly. For instance, the lowland rainforest is hot and moist, while the mountain forest is cool and dry.

“Incorporating the Spectranomics approach, we were able to get beyond traditional measurements of biodiversity and document that at higher elevations, forests became less functionally diverse, which has implications for understanding how tropical forests and their carbon cycling may respond to climate changes such as increasing temperatures,” Martin said.

Sandra Durán, University of Arizona postdoctoral fellow and co-author on the paper, added, “Climate scientists are interested in predicting how much carbon is able to be captured by specific forests. We’re showing these measurements of plant chemistry from the airplanes have potential to make predictions of carbon gain for the first time in one of the most biodiverse forests in the world.”

At the Sandra Day O’Connor College of Law at Arizona State University, students learn from some of the nation’s foremost scholars and innovative legal instructors. They have played an integral role in ASU Law establishing itself as one of the highest-ranked public law schools in the nation, a leading center of scholarly exchange with a tradition of exceptional bar-passage and quality job-place...

At the Sandra Day O’Connor College of Law at Arizona State University, students learn from some of the nation’s foremost scholars and innovative legal instructors. They have played an integral role in ASU Law establishing itself as one of the highest-ranked public law schools in the nation, a leading center of scholarly exchange with a tradition of exceptional bar-passage and quality job-placement rates.

Among the notable faculty members is Rhett Larson, a professor who was recently named the Richard Morrison Professorship in Water Law. 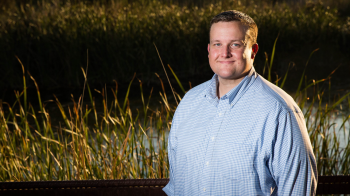 Larson’s research and teaching interests are in property law, administrative law, and environmental and natural resource law, in particular, domestic and international water law and policy.

“Richard Morrison has been my friend and mentor since I was a young water lawyer,” Larson said. “He’s also been a leader in Arizona water policy. It’s an honor to hold a position that bears his name.”

Larson graduated from the University of Chicago Law School and received his Master of Science in Water Science, Policy and Management from Oxford University, where he was a Weidenfeld Scholar. Larson’s research focuses on the impact of technological innovation on water rights regimes, and on the sustainability implications of a human right to water. He is a senior research fellow with the Kyl Center for Water Policy, where he works on dispute resolution and improved processes in water rights adjudications in Arizona and the Colorado River Basin. Larson was a visiting professor and Fulbright Scholar at the Pontifical Catholic University of Ecuador and works in the Middle East on water security issues.