John Dreyfus always wanted to attend college but when it came time to graduate high school, his plans changed. He graduated high school at 17 and wouldn’t turn 18 until a few months into his first semester at college. Without either of his parents signing the paperwork, he was unable to enroll. Life kept going until one fall day in 1981 when he was riding his motorcycle in Tempe. Dreyfus was looking for a sandwich shop and turned on to University Drive to find himself face to face with Arizona State University. He said he wanted to sign up right at that moment. But he had no idea how to afford the costs of living and attending school and had to put the idea of school on the back burner once again.

Then a few years ago, Dreyfus became disabled and was offered vocational rehabilitation which he was able to turn into an opportunity to finally attend ASU.

Dreyfus is graduating this semester with a bachelor's degree in philosophy and a concentration in morality, politics and law. We caught up with him to ask a few questions about his time at ASU.

Answer: I took a class called “Introduction to Philosophy” at Phoenix College and Dr. Eddie Genna taught about the ship of Theseus and I was hooked on philosophy. I received a scholarship for 60 credits deferred at any Arizona state university through Phi Theta Kappa and ASU offers a degree in philosophy, morality, politics and law. My four favorite subjects rolled into one.

A: Asking which professor taught me the most is like asking which child is my favorite. I have learned so much from all of them. The professor I have had the most involvement with is Dr. Cheshire Calhoun. I took two classes with her in my first semester and she was my Barrett honors thesis chair. Dr. Jennet Kirkpatrick was a committee member and I took a class with her. She was also supportive of my efforts and mentored me to a point. Dr. Joan McGregor introduced me to the School of Civic and Economic Thought and Leadership, which presents speakers and debates. I attended several of those and thoroughly enjoyed them. Dr. Thad Botham taught me that I could survive an onslaught of information at the beginning of a semester and still succeed in classes. Dr. Steven Reynolds allowed me to adapt his lessons in metaphysics to my life experiences.

Through Barrett I was able to take classes at Sandra Day O’Connor College of Law. Several of the instructors there have helped me immensely and one (instructor) is writing a letter of recommendation to ASU Law, which has always been my goal.

A: The advice I give to all the friends I have made at ASU in their last semesters is: Make the world a better place.

Q: What is your favorite spot on campus, whether for studying, meeting friends or just thinking about life?

A: In the spring of 2019, I had classes on Monday and Wednesday that put me at Cady Mall for several hours in the afternoon. I would read or study and eat lunch. I enjoyed watching events that took place there and the people who would make speeches and the audience members who would argue back. It was enjoyable.

A: I am applying to ASU Law with hopes of joining the Maricopa County public defender’s office and work in the Rule 11 setting, or possibly the death penalty team in the advocate office.

A: If someone gave me $40 million I would try to build a housing project to give homeless people a place to live. I would also attract psychologists, attorneys, counselors and medical professionals to donate time and services to help people succeed in living in structured situations.

Editor’s note: This is part of a series of profiles for fall 2019 commencement.When graduate student Andrew Robinson first started classes in the School of Arts, Media and Engineering, he didn’t know what responsive media was – or that it even existed. “Learning all about it as a new art form that is cross-disciplinary with other art forms, as well as scientific research, was a huge pe...

When graduate student Andrew Robinson first started classes in the School of Arts, Media and Engineering, he didn’t know what responsive media was – or that it even existed. 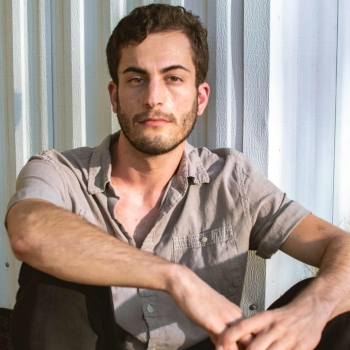 “Learning all about it as a new art form that is cross-disciplinary with other art forms, as well as scientific research, was a huge perspective change because it opened my eyes up to a way in which I could fulfill all the wild ideas I think,” he said.

After graduation, Robinson hopes to use his newfound passion to create stage designs for live music and responsive concert animations. He also plans on continuing to create immersive responsive media projects on his own and in partnership with Tempe’s Sunroom, where he is actively working as the stage projectionist for local bands.

Answer: There was a moment about a year and a half into the program when I was starting to get the hang of how computer programming in Max MSP worked. I had an idea to make a motion controlled Instagram-esque camera filter. It wasn’t for a homework assignment or anything, it was just a random idea that came to me based on different bits of information I had learned from different classes. I built it though, and it actually worked, and the act of realizing my idea felt amazing! It was incredible to have this feeling of being able to create an idea I had into reality. After that, I tried to learn as much as I could about programming in Max MSP both inside and out of the classroom.

A: It was in Intro to Interactive Environments with Professor Tinapple that I had learned the basic interactive techniques to make the application I talked about in the first question.

A: Find the thing you’re really passionate about, the one thing that makes school not feel like school or work not feel like work, and pursue that with your full force.

A: The Digital Culture Lounge is the best place on campus because it’s extremely peaceful to sit in there with all the awesome ambient lighting to just do work or chill before class.

A: Climate change and the lack of renewable energy resources in America.