There are students at Arizona State University who have a personal connection to immigration reform.

Organizations such as Undocumented Students for Educational Equality (USEE) and Association of CPLC Scholars at ASU are there for these students, starting conversations among the community and bringing awareness to certain issues through events around campus. 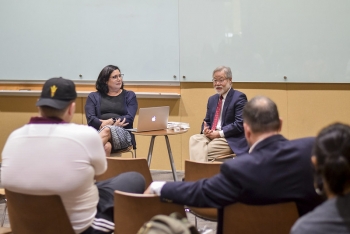 The purpose of the event was to encourage students to start a conversation on immigration, a difficult topic — especially in Arizona.

For USEE advocacy director Denis Alvarez, a junior studying secondary education, immigration reform and a pathway to citizenship is a topic that personally affects her as an undocumented student.

“We are trying to bring up immigration reform to the conversation, which is something that we currently need,” Alvarez said.

The fireside chat allowed Kamasaki to educate and inform students about previous government legislation and encourage them to take action for the future.

“It is important to get mobilized and organized; that is key,” Kamasaki said.

Kamasaki is the senior cabinet adviser at UnidosUs, a Hispanic civil rights organization, where he has been a significant advocate.

“We ought to also be aware that there are people who have reservations, but we need to find a way to communicate with them,” Kamasaki said.

The audience was able to ask Kamasaki questions after the event and left with a sense of how sustained advocacy work can make a difference.

“One of the most important takeaways from the discussion is that the last time we had meaningful, comprehensive immigration legislation was in 1986,” Magaña said. “This insight shows students that immigration changes takes decades for reform.”

President of the Association of CPLC scholars at ASU Mateo Reyes, a senior in sports business, was in attendance and appreciated Kamasaki’s effort to converse with students.

“It’s one thing to read the book but it’s another thing to see the author in person and be able to ask him questions and listen to other people of the community share their thoughts. It was very insightful,” Reyes said.

The event, taking place at the Georgia Tech McAuley Aquatics Center, represents one of the biggest international meets this season until the Olympics and will feature many Olympic hopefuls. ... The event, taking place at the Georgia Tech McAuley Aquatics Center, represents one of the biggest international meets this season until the Olympics and will feature many Olympic hopefuls.