ASU alumni recognized for their vision, gifts to transform stadium

The vision and gifts of three Arizona State University alumni is coming to fruition after five years. 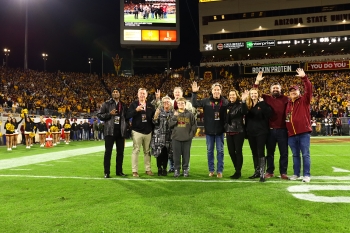 Bill Kent and Jack Furst and their families, along with the family of the late Steve Butterfield, were recognized during a home football game for their contributions to Sun Devil Athletics and the ASU 365 Community Union. Download Full Image

During Saturday’s ASU football game the three men and their families were honored with the renaming of the student-athlete facility. The Butterfield, Kent, Furst Student-Athlete Facility, located on the north side of the stadium, houses the team locker room, medical facilities, coaches' offices, meeting space and a training table.

Kent, along with his wife, Julie, and their son, Buck, and Furst and his wife, Debra, attended the game and naming ceremony. Butterfield, who passed away in 2017, was represented by his sons, Brooks and Steve Jr., Steve’s wife, Mary, and their children, Joey, George and Stevie.

“The efforts and dedication by the Butterfield, Furst and Kent families to Sun Devil Athletics and our football program is insurmountable,” said Vice President for University Athletics Ray Anderson. “We graciously thank them for their leading contributions to the stadium reinvention and student-athlete facility, and are honored to be able to pay homage to their families for generations to come.”

When Butterfield, Kent and Furst collectively donated $40 million to make 365 Community Union a reality, they were not looking for naming rights on buildings. They all agreed to leave naming rights open to other donors while the ASU Foundation fundraised for the project.

“The three of us never really cared about the recognition of it,” Kent said. “We believed in the cause and certainly felt like we could have a much more competitive facility for the football program. We were all behind it from that perspective.”

After five years of fundraising, the ASU Foundation raised about $80 million for the capital project, and no other major donors came forward looking for naming rights. The ASU Foundation chose to recognize the Butterfield, Furst and Kent families as a result of their dedication and contributions to the campaign.

A vision beyond a stadium

Discussions to develop ASU 365 Community Union started in 2014 when Furst became more involved with ASU’s athletics through Sun Devil Athletics supporter Butterfield. At that time, there was talk of renovating the football stadium and ideas surfaced about what else could be done.

“I wanted to see if we could turn an athletic facility into a community union where you would have yield and utilization,” said Furst, the 2017 Founder’s Day Philanthropist of the Year. “Why couldn’t we, No. 1 in innovation, turn this into a community union and have something going on at the union 365 days a year? No one else is doing it. Why would you spend money just on a football field used seven times a year?”

Butterfield and Furst had several meetings with ASU President Michael M. Crow, ASU Enterprise Partners CEO Rick Shangraw Jr. and members of the athletics department to determine how to make their vision a reality without asking for tax dollars to fund the project.

Furst called his Delta Sigma Pi business fraternity friend Kent to see if he would like to be involved and contribute to the fundraising. Kent agreed to participate, and Furst said he would match what Kent donated.

“Jack and I had lots of conversations about how we could make this a bigger project than just a stadium,” Kent said. “I’m proud of being a part of that vision.”

The Herberger Institute for Design and the Arts had a three-year student project to design the 365 Community Union and stadium reinvention.

The first phase of the union opened in September.

“The tireless effort and commitment provided by Jack Furst, Bill Kent, our late friend Steve Butterfield, and their families to fulfill their vision is impressive,” Shangraw said. “We appreciate their dedication to creating something bigger and better that will serve ASU and surrounding communities for years to come.”

Kent and Furst both say they are excited about the progress of ASU 365 Community Union and look forward to continued progress. Both said this project fits in well with ASU’s overall vision regarding innovation.

“One of the real challenges when you’re a big university — you have to create a heartfelt connection,” Furst said. “The 365 Community Union is that. The football stadium is like ASU’s Central Park.” 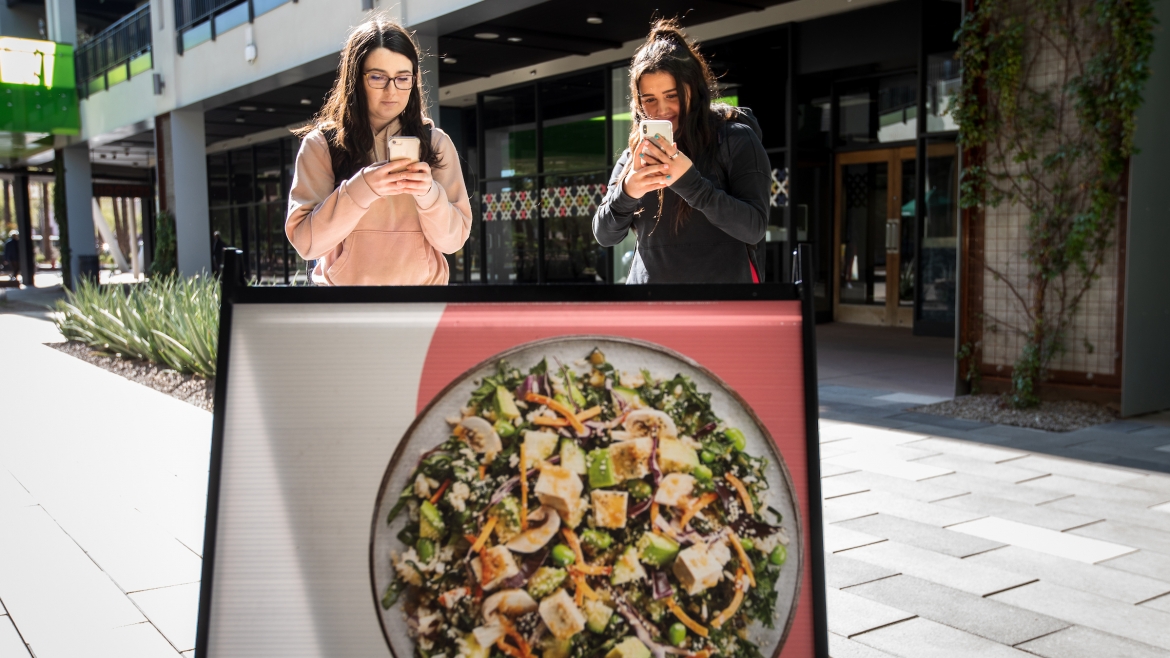 Downtown Phoenix doughnut lovers rejoiced this year when beloved Valley chain Bosa Donuts opened not one, not two, but three locations within a 1-mile radiusOne at the Arizona Center on the northeast corner of Van Buren and Third streets, one inside an office tower at First Avenue and Monroe Street and one inside a high-rise condominium on Fourth and Jackson streets, just west of Chase Field — in case anybody was wondering..

“It’s crazy to think about how there’s almost no other options besides cafes or junk food,” said health sciences sophomore Jordyn Stebbins, sitting outside of a Starbucks just around the corner from the new Bosa location on a recent November afternoon.

She and classmate Hannah Kirsch, a biological sciences sophomore, have spent the past couple weeks surveying a portion of the downtown area between Seventh Avenue on the west to Seventh Street on the east and McDowell Road on the north to Lincoln Street on the south.

As they crisscross the city streets, track park pathways and navigate retail centers, they’re looking for health indicator data — features of the environment that either promote or hinder healthy lifestyles. A wide sidewalk, for example, may encourage people to walk short distances rather than drive, while an abundance of liquor stores could contribute to higher instances of alcoholism in a particular area.

The data they’re collecting is part of a course group project, called the Seven by Seven project, referring to the names of the streets that serve as the eastern and western boundaries to their fieldwork. At the end of the course, students will present their findings along with recommendations for policy changes that would create an environment more conducive to healthy living.

This course and others like it that turn students into citizen scientists are an outcome of the College of Health Solutions’ translational science initiative. The point of the initiative is twofold: to shorten the time between the point when a research discovery is made and when it impacts the community, and to ensure every College of Health Solutions student receives some sort of experiential learning before they graduate, though CHS 294 and other courses are open to students from any college or school at ASU. 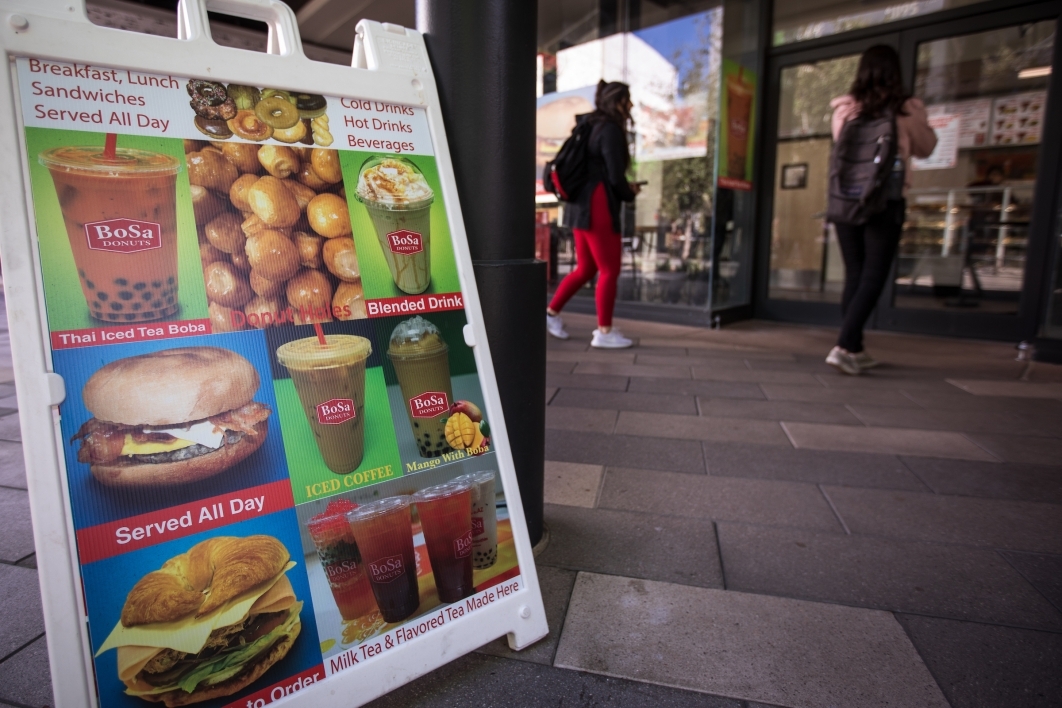 The Bosa Donuts location at the Arizona Center on the northeast corner of Van Buren and Third streets is one of three to pop up within a 1-mile radius in the downtown Phoenix area this year. 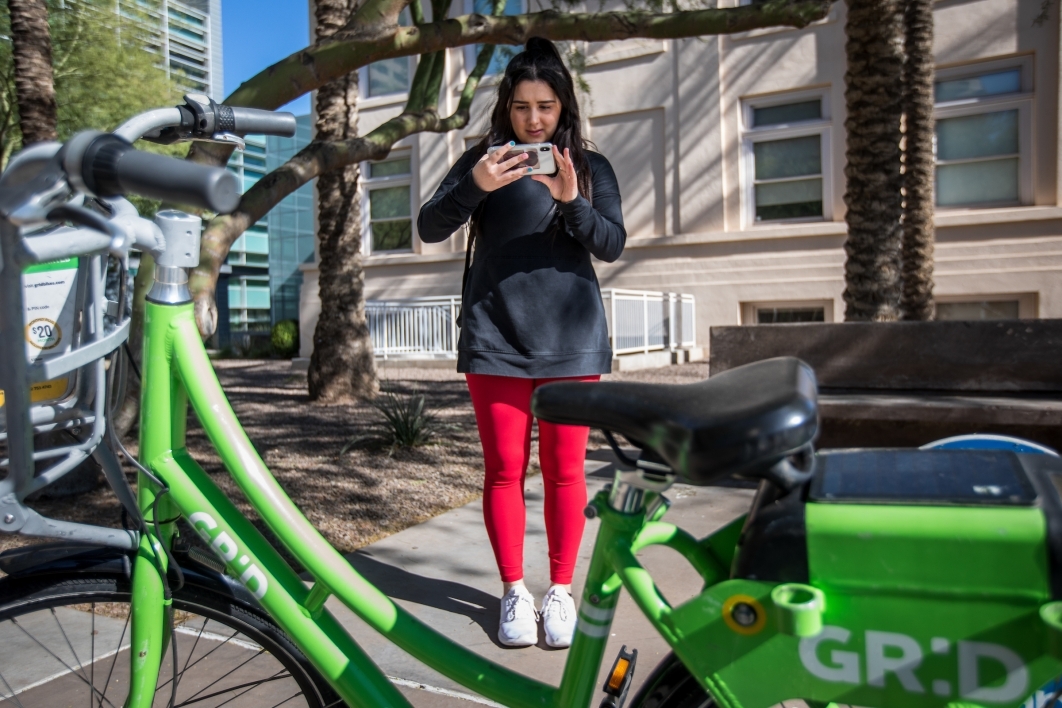 ASU College of Health Solutions sophomore Jordyn Stebbins snaps a photo of a ride-share bike using the Our Voice app. 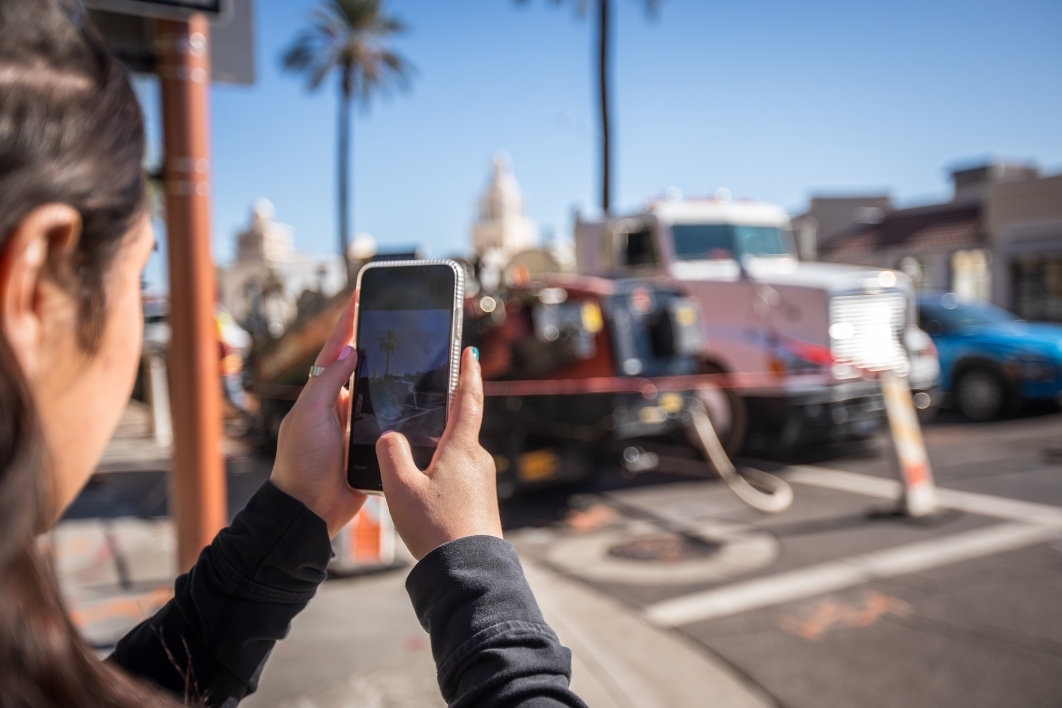 Construction sites can create a barrier to physical activity for city residents.

“The citizen science approach seemed like an exciting and interesting way to give students both research skills and a familiarity with the local community, as a precursor for them to become more embedded in it in the future,” Williams said.

As part of the Seven by Seven project, students in her course are focusing on environmental indicators for five health domains: features that promote or hinder physical activity; availability of healthy food; safety; sun/heat exposure; and substance abuse/misuse.

When ASU Now met up with Stebbins and Kirsch, they were zeroing in on the first two, respectively. Using an existing app called Our Voice, which was developed in partnership with Stanford University and College of Health Solutions Associate Professor Matt Buman, the pair can use their smartphones to take photographs of things like unsafe crosswalks and the location of ride-share bikes, record a brief audio or text message about why it was documented and select an icon to connote whether it is a positive or negative health indicator. The app then geolocates every photo onto a map of the area, displaying the positive or negative icon to give a 30,000-foot view of the environmental health there.

The data Stebbins and Kirsch have collected thus far has suggested that food choices in their assigned sector lack diversity and healthy options, and the physical environment is not as safe as it could be for those living with disabilities.

“It kind of just opens your eyes to all the small things you normally wouldn't notice,” Stebbins said. “One thing that stood out to me was a lot of the crosswalks at intersections don't have the sounds to notify the visually impaired if they’re able to cross.”

This is the first semester the 294 course has been offered, and Williams sees it as an opportunity to learn and continue experimenting on future iterations. By the end of the spring semester, she plans to be able to have students present their findings to local policymakers and community members.