The Engineering Projects in Community Service, or EPICS, program in the Ira A. Fulton Schools of Engineering at Arizona State University provides student teams the opportunity to work on projects focused on developing solutions to real-world problems in communities across the globe.

This year at the Fulton Schools’ second annual EPICS Elite Pitch Competition, the top eight teams working on EPICS projects presented five-minute pitches of their solutions to a panel of judges. 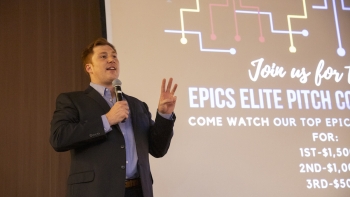 “The EPICS Elite Pitch Competition is an opportunity for our top teams to compete for additional funding to allow them to construct larger prototypes as well as to fully deliver their system to the community,” said Fulton Schools lecturer Jared Schoepf, EPICS program’s director of operations.

“It’s also an opportunity for students in other classes to get an idea of what some of these elite teams are working on and provides additional opportunities for them to start working on real-world projects and help the community,” Schoepf said.

The first-place team, the Puerto Rico Water Contamination Project, won $1,500. The Phoenix Zoo Elephant Engagement Project, which placed second in the competition, won $1,000. The third-place team, Headcount, won $500. Each of the eight teams that competed won an additional $1,000 in funding for their project from an eSeed grant.

“It is fantastic to see some of our top EPICS teams realize the power of turning their lab-based projects into marketplace-based ventures,” said Brent Sebold, who organized the eSeed funding for the teams. “Luckily for our students at ASU, we have myriad opportunities for them to advance their entrepreneurial pursuits. Specifically, the winners of the EPICS Elite Pitch Competition have all won funding from the eSeed challenge funding track within our ASU Venture Devils Program.”

The Puerto Rico Water Contamination team is working to clean grey water, or household wastewater, from washing machines in Mariana, Puerto Rico, and use it to supply local crops.

“Mariana and Puerto Rico as a whole have been going through quite a bit since they were hit by Hurricane Maria in 2017,” said Blake Stephens, a junior in mechanical engineering and the team lead on the Puerto Rico Water Contamination Project. “It’s definitely important to us that people know about it and help out.”

Drawing inspiration from industrial systems in large water-treatment plants, the team settled on a dual-tank system of removing chemical contaminants from water.

In the first stage, water is run through a pump into the distillation tank system. It enters the first tank where it is heated to 100 degrees Celsius. The steam produced goes to a condenser to return the water back to its liquid state. The water then goes into a storage container.

The team found that in this stage there was still bleach present in the water and a lot of the nutrients necessary for plants to thrive had been removed.

To remedy this, in the second stage of filtration the water passes through an activated carbon filter that removes the bleach and adds nutrients back in.

The Puerto Rico Water Contamination Project is designed to help the people of Puerto Rico help themselves by teaching them how to use the system, and the team is looking forward to the next steps in its efforts.

With the additional funding the team plans to design a microcontroller to modulate the flow of water, run tests on the carbon filter and increase the size of their system.

“We realized that our small-scale model was pretty effective, so if they want to have a garden at their own home, they can hook the system up to their own personal washing machine,” Stephens said. “We’re also going to be making an assembly guide and as well as a troubleshooting guide so if any break happens, we can tell them how to fix it.”

“In the short term, we hope to be able to engage the elephants and see them moving around the enclosure,” said Taylor Benning, a third-year student studying mechanical engineering and the team lead for project. “We are looking at ways to automate the process of measuring the activity of the elephants. In the long term, we hope to see a decrease in the elephants’ weight because they are currently overweight.”

The team is designing a motion sensor game using steel frames and motion detecting buttons. When a light or sound goes off, the game begins, triggering a series that requires button inputs from elephants at every stage of the game. The zookeepers can interface with the game using an iPad and can vary the time between intervals, as well as the number of button pushes needed in the series, for the elephants to receive a treat at the end.

“The most challenging aspect so far has been trying to get the programming done,” Benning said. “For a while, nobody on my team had any experience with any programming language, so it was a lot of trial and error. Now, we have a couple of members with experience with Python, and have made substantial progress in getting the game working. We should have a fully functional prototype by the end of this semester.”

With the additional funding from the EPICS Elite competition, the team has made a fully functional prototype of its design using acrylics, and are planning to use the rest of the funding to create a metal version.

“The project has the potential to be used for cognitive studies on elephants, which previously could not be done,” Benning said. “It provides the most interaction between elephants and humans without physically touching. Seeing it work and having people and elephants use something we built is amazing.”

The Headcount team is working on a solution that impacts students on campus. They are developing a better way to count the number of people who move in and out of rooms at the Fulton Schools' career fairs.

“The current method they have uses clickers, and they have to communicate from one doorway to another, and it’s not very accurate,” said Nicholas Iwanski, a third-year student studying electrical engineering and the new team lead for the Headcount project.

“If they exceed capacity, and the fire marshal is called and they don’t have an accurate count of the number of people in the room,” Iwanski said. “The entire event is shut down and everybody loses out on opportunities to get jobs and internships. So, we’re planning on automating the whole process.”

The team’s current prototype involves a thermal camera and artificial intelligence technology that can track people as they enter and leave a room and achieve a much more accurate count of how many people are at the attendance.

Since the team formed in fall 2018, the members have explored a few different prototypes and overcome a number of unique challenges, including trying to find a way for the device to communicate between rooms without using Wi-Fi, so it would adhere to ASU policies.

“It’s really cool seeing how the project started with just three of us, and now there are nine people who are all very passionate about the project and plan to come back in the next semester,” Iwanski said. “Knowing that at the end of it we’re going to have something that we can see here at ASU and everyone in the Fulton Schools is going to be able to use, that’s really cool to be able to give back to the community around us.”

Once the team finishes its first prototype, they plan to use the money from the competition to purchase multiple units of the counters.

They hope to test two fully-built prototypes by the spring 2020 career fair. Once they’ve fixed all the bugs, the team plans to install the device in every room at the career fair next fall.

After 20-day layoff, hockey hosts a team of felines on the ice Friday and Saturday night at Oceanside Ice Arena ... After 20-day layoff, hockey hosts a team of felines on the ice Friday and Saturday night at Oceanside Ice Arena