More than 7,000 communication researchers, practitioners, faculty and students are members of the NCA, and more than 4,000 attended the convention.

Associate Professor Amira de la Garza was awarded the Francine Merritt Award by the women’s caucus. The interest group bestows the award to scholars “who have made a difference in the field of communication through their mentoring, service, advocacy, teaching and scholarship.”

In a letter nominating de la Garza, one scholar wrote, “Amira routinely mentors graduate students, especially women of color, but also women who are working to create new methodological and epistemological approaches in the field of communication. Many of those students have pursued positions in the academy and some have already risen to positions of authority as departmental chairs and administrators in institutions across the country.”

Accepting the award, de la Garza wrote, “I have enjoyed my many years as a nontraditional scholar in this field largely because of the rewards that come from watching others succeed and attain intellectual, personal and professional goals knowing that they have someone supporting them.” 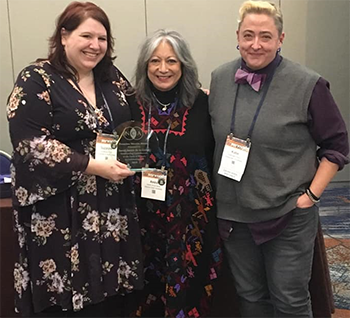 The article “En/Gendering dystopia: The performance of torture at Guantanamo Bay prison” was published in Text and Performance Quarterly in 2018.

According to the nomination, “The article engages an important topic — the U.S. military interrogation of Muslim prisoners at Guantanamo Bay Prison using tropes of female sexuality — with precision and journalistic integrity."

Accepting the award, Olson said, “I share this award with Kirt Shineman, a professor at Glendale Community College, who is a former graduate student and longtime friend. Considering the number and caliber of NCA journals, to have our article singled out as the best is a humbling honor."

Professor Sarah Tracy received the Charles H. Woolbert Award for Outstanding Scholarship, an award presented for a journal article or book chapter that has “stood the test of time” and has become “a stimulus for new conceptualizations of communication phenomena.”

The article “Fracturing the real-self/fake-self dichotomy: Moving toward ‘crystallized’ organizational discourses and identities” was published in Communication Theory in 2005.

In a nominating letter, one communication scholar noted that the article “has since been cited over 370 times and has helped scholars frame their work on identity formation and performance across the field of communication. Scholars have used Tracy and Trethewey’s theoretical framework to consider identity in multiple communication contexts, primarily organizational, but also interpersonal and computer-mediated communication.”

Accepting the award, Tracy said, “I am so honored to share this award with my coauthor Angela Trethewey. This article was truly a collaborative effort, and its ideas continue to guide my own life. In a time where it is ever easier to live in an echo chamber, I continually endeavor to surround myself with a variety of discourses, viewpoints and structures, and maintain a crystallized, multifaceted self.” 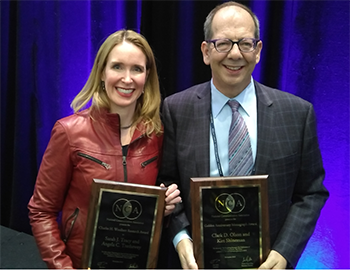 In addition to the faculty awards, several other Hugh Downs School faculty and graduate students were honored at the conference with Top Paper awards:

"Theorizing Postcolonialism in Communication Studies: A Past and A Future," Ma Angela Labador.

"'Who the F--- is Heather?': Performing Ambiguity on 'RuPaul’s Drag Race,'" Benjamin LeMaster and Michael Tristano.

"'We don't call the police': Epistemological Borders in the Gentrifying City," Tyler Rife.

Top Student Papers in the Theatre, Film and New Multimedia

"Militant Survival and Black Liberation in 'Get Out,'" Kelsey Abele, Erin Zamora.

"Pain, Borders, and Migration: The Other (Embodied) Side of Immigration," Ma Angela Labador.

See the full list of NCA presentations from the Hugh Downs School.