5 esteemed alumni honored with an induction to The College Leaders

With 23 boundary-spanning departments and schools, The College of Liberal Arts and Sciences at Arizona State University offers some of the most interdisciplinary studies on campus. Alumni of The College go on to careers that are equally diverse. On Nov. 22, five outstanding graduates who demonstrate that breadth will be celebrated with an induction into The College Leaders.

Just 69 of over 120,000 alumni from The College’s natural science, social science and humanities divisions, recognized for contributions to communities, professional advancements and impacts on the world at large, have been selected since The College Leaders program began in 1997. The College will also recognize 147 of its current students from across the divisions, nominated from a pool of over 23,000. 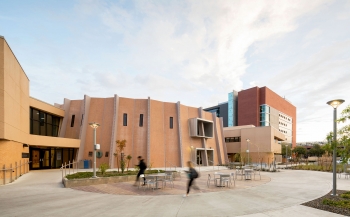 As part of the academic heart of the university, alumni of The College of Liberal Arts and Sciences go on to careers that span industries and disciplines. Download Full Image

From the degrees they received to the fields they entered, The College Leaders represent the myriad ways liberal arts and science tracks play into the real world.

Montoya earned bachelor’s degrees in political science and transborder Chicana/o and Latina/o studies and a minor in dance in 2012. Growing up undocumented in Mesa, Arizona, provided an intimate understanding of how immigration policy impacts daily life. She founded nonprofit organization Aliento in 2016 with the aim of helping Arizona’s undocumented students, recipients of Deferred Action for Childhood Arrivals and mixed-immigration status families through the barriers she navigated herself.

She’s since earned a master’s degree in secondary education from Grand Canyon University and completed an executive education program through the Harvard Kennedy School of Government. She said she sees education as a powerful tool for empowerment.

“I’m a firm believer that once you’re educated, no one can take away those skills and that knowledge from you,” said Montoya, whose work earned her a spot on the Forbes 30 Under 30 list in 2018. “Going to ASU, I was able to build relationships and challenge my own thinking. All of that helped me understand who I am and what I am worth.”

“I think often we hear that millennials are the do-nothing generation, but I have witnessed the opposite,” she said. “I have seen young people of all ages getting involved in leadership and investing in not just their growth as individuals, but also that of the community.”

Entrepreneurism for social good is also a cornerstone of Najafi’s professional trajectory. After earning bachelor’s and master’s degrees in communication from what is today the Hugh Downs School of Human Communication in 1992 and 1996, she penned a New York Times bestseller and founded a string of business ventures. Her latest, dubbed The Cause Collection, is a womenswear line that connects fashion with advocacy by allowing consumers to choose the charity a portion of the purchase will support.

“The reason I was drawn to fashion was to create a vehicle to wear my activism,” she said. “I saw an opportunity to launch a clothing line to galvanize people and get my message across.”

Najafi said her communication degrees had applications in all of her entrepreneurial pursuits, despite being spread across multiple industries.

“I've always held my degrees as banners of pride because it allows you to really hone your skills at talking to people,” she said. “It really gave me this fearless approach to starting businesses, because when you're trying to touch a consumer, you have to communicate with them.”

Ang came to ASU from his native Singapore on an athletic scholarship for badminton and graduated with concurrent bachelor’s degrees in psychology and computer systems in 1994. Now he’s the managing director of CornerStone Wines and board chairman of Hock Tong Bee wholesaler and distributor of wines, an enterprise originally founded by his great-grandfather.

He said studying psychology helped him build his emotional intelligence (EQ) and make well-informed decisions as a leader.

“It's very important to be able to observe a situation and then be able to reflect very quickly and decide on the right approach,” he said. “I can't say that I am perfect in doing the EQ side, but I would say that my psychology degree has definitely helped me improve.”

For Convey, pursuing a degree in the humanities ended up being a springboard to a multifaceted law career. The alumnus earned a bachelor’s degree in English in 1982 and went on to law school at Chicago’s DePaul University.

“I recognize all the time that my liberal arts degree is what helped me get here — my advice to students is to try many things and don’t be afraid of changing your mind, because exploring opportunities is why you go to school.”

Today, he presides over family law cases as one of 500 governor-appointed judges with the Los Angeles County Superior Court. He sees the position as a dream job, but said he didn’t always see himself there.

“A lot of people ask whether I always planned on becoming a judge, and I realize that I could have stayed in Chicago and become a firefighter like my dad, but my parents gave me the confidence to find my own opportunities,” he said.

This month’s event will also honor Robert Kestelik, another law professional who graduated with a bachelor’s degree in Asian languages and a certificate in Asian studies from what is today The College’s School of International Letters and Cultures in 1994.

He went on to attend law school at Washington University in St. Louis and worked in a handful of international law firms before becoming assistant general counsel to multinational toy manufacturing company Mattel, providing legal support to the company’s worldwide operations and marketing and sales subsidiaries in China, Japan, Mexico, Italy, Russia and dozens of other countries.

He also gave back to ASU. Today, students in the School of International Letters and Cultures can apply for the Robert J. Kestelik Scholarship, which supports students who are studying a handful of foreign languages and are involved in LGBTQ+ issues or groups.

“I grew up in a conservative Catholic family that accepted me for who I am,” Kestelik said of his decision to create the scholarship. “But I also realize that many students who identify as LGBTQIA may not have the same level of familial support — I want to help students who don’t have that support, and I want them to know that the LGBTQIA community does support them.”

Kestelik passed away in August 2019, but will be recognized posthumously by The College this month.

ASU ranks No. 9 in nation for students studying abroad

As it has for each of the past five years, Arizona State University this year increased its university study abroad ranking in the annual Institute of International Education Open Doors 2019 report. Last year ranked No. 10, ASU now ranks at No. 9 for sending 2,567 students on credit-bearing study abroad programs.“This year’s No. 9 ranking follows a five-year trend for ASU in continuing to sup...

ASU ranks No. 9 in nation for students studying abroad

As it has for each of the past five years, Arizona State University this year increased its university study abroad ranking in the annual Institute of International Education Open Doors 2019 report. Last year ranked No. 10, ASU now ranks at No. 9 for sending 2,567 students on credit-bearing study abroad programs. 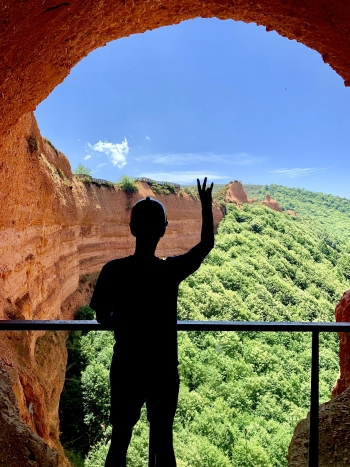 “In partnership with our university community and academic partners, we are continuing to develop innovative study abroad programs with the goal of making study abroad more accessible and inclusive,” Malerich said. “We are thrilled with this next milestone and look forward to continuing to help Sun Devils from all walks of life and all academic disciplines thrive abroad.”

ASU continues its commitment to facilitating flexible options for all campus-based and online students interested in studying overseas, including options such as Global Intensive Experiences running seven to 14 days during academic breaks and short-term program options during semester sessions A and B.

Senior biomedical engineering and Spanish linguistics double major Kameron Moore said, “Study abroad has shown me that through travel and communication with people from all over the world that the stresses, anxieties, worries, hopes, dreams, etc. we feel every day as students are not unique to ourselves.” After spending nearly four weeks of his summer in 2019 on the Culture and Text in Contemporary León and Barcelona, Spain program, it gave him a perspective to appreciate cultural differences.

“Through the lens of another culture, you can self-reflect on your own life to better understand what is really meaningful. My goals with my majors are to work in an international health care setting developing health care solutions unique to different populations. I look forward to seeing more of the world in the future and hope to utilize the knowledge I have gained from my experiences with other people and places to make the world a better place for all,” Moore said.

The Study Abroad Office at ASU offers more than 250 program options in more than 65 countries, with program lengths ranging from one week to one year (and nearly anything in between). Financial aid and scholarships are available for students who participate in semester and yearlong programming.