Arizona State University students took on challenges in robotics, machine learning and artificial intelligence alongside their peers from universities and community colleges across the state at the first-ever Robo Hackathon on ASU’s Tempe campus.

Undergraduate students in engineering, computer science and related majors were challenged with developing an autonomous robotic system that could race through a track and recognize their school’s mascot. 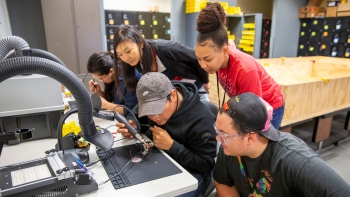 Each team, which included three to five undergraduate students and a maximum of one graduate student, included members representing multiple disciplines, just as the field of artificial intelligence requires in industry and research teams. They competed for more than $8,000 in prizes — and bragging rights as the first Robo Hackathon winner.

Robotics, machine learning and artificial intelligence are growing in importance as Arizona’s industry and academic institutions position the region as a smart technology hub. The ASU University Technology Office hosts hackathons each fall and spring to empower students to apply their skills and learn new ones to solve real-world problems. ASU UTO saw a statewide robotics hackathon as a great opportunity.

"The Robo Hackathon — and all ASU hackathons we lead — are a way to actively engage students, our next generation of leaders and changemakers, with opportunities to learn and apply the kinds of skills that are vital for the growth of Arizona and beyond,” said John Rome, deputy chief information officer for ASU UTO and lead organizer of the Robo Hackathon. “The students who participated are truly a snapshot of the future and it gives us great pride and hope. It was an honor to provide them an opportunity to experiment with the latest cloud solutions."

To put on Arizona's first Robo Hackathon, UTO leveraged strategic partnerships with the Ira A. Fulton Schools of Engineering at ASU and the university’s work in the Smart City Cloud Innovation Center, which includes partners such as Amazon Web Services, to organize an event that engages the next generation of changemakers to use their skills to impact Arizona’s technology future.

Sponsors NVIDIA and AWS provided the participants access to some of the latest robotics and AI programming technology. Students used the open-source SparkFun JetBot AI Kit powered by NVIDIA’s Jetson Nano Developer Kit as a launchpad to create their AI projects, paired with AWS tools such as AWS RoboMaker and SageMaker. 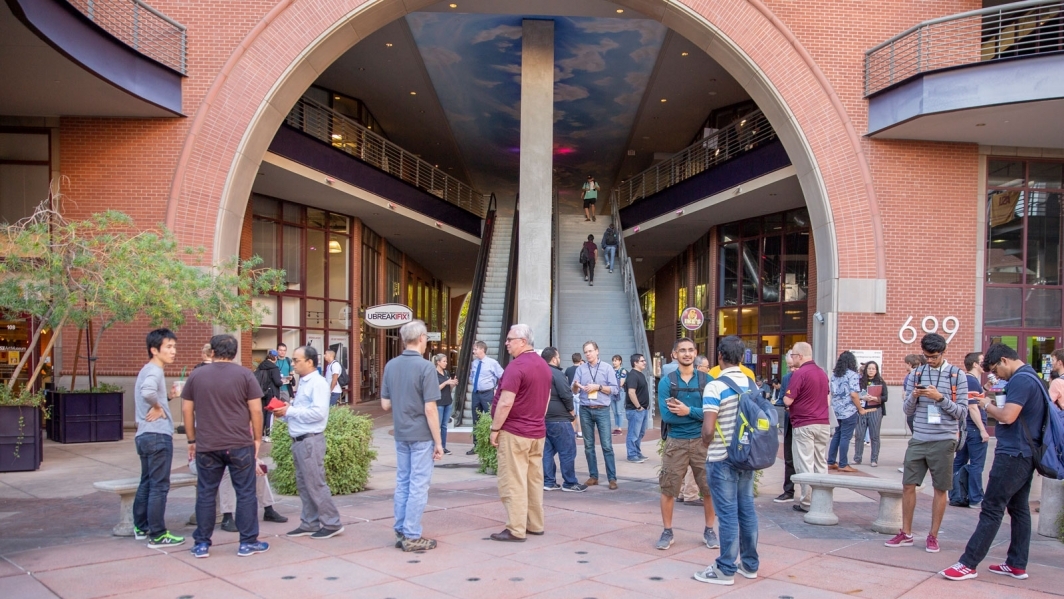 Robo Hackathon participants gather in front of the Brickyard building on ASU’s Tempe campus. The three-day event held Nov. 8-10 drew student participants from colleges and universities across the state. 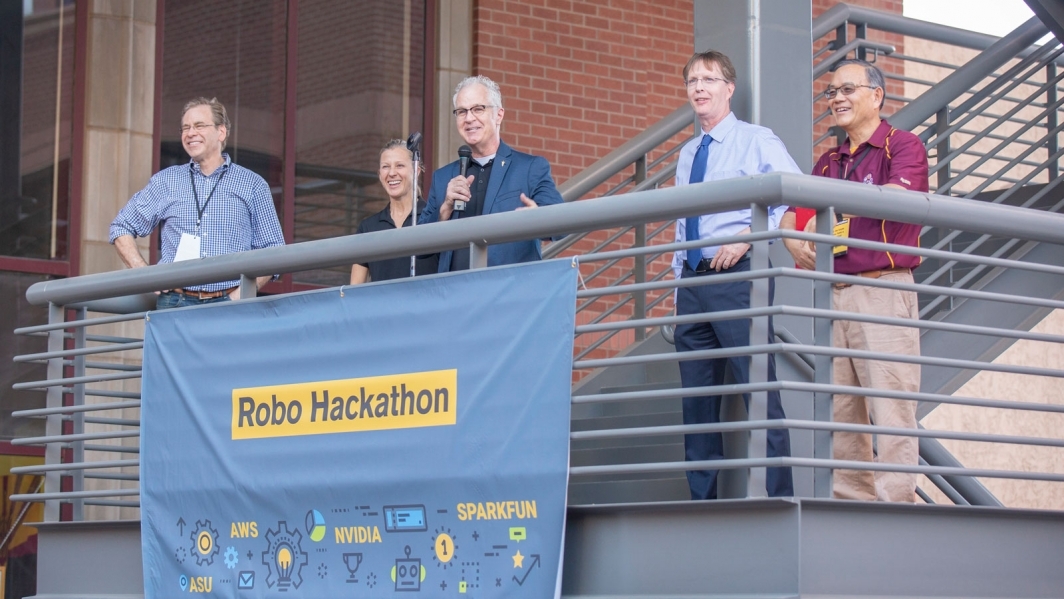 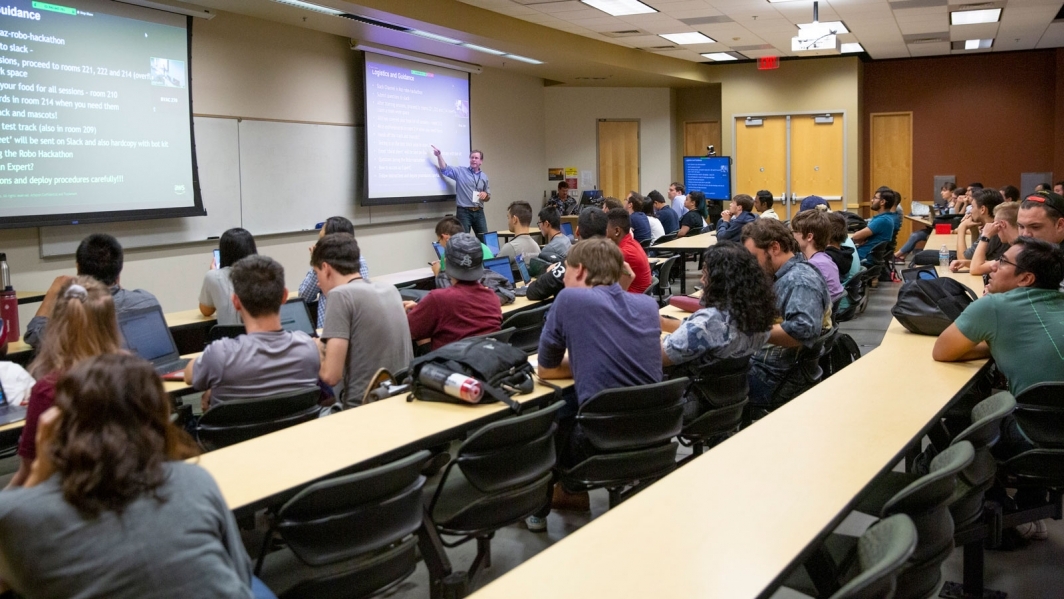 Jack Reilly, Amazon Web Services business development manager, introduces the weekend’s events to the Robo Hackathon participants. Over the course of the three-day event, students learned how to use new tools and concepts in robotics, machine learning and artificial intelligence to create a robot that could navigate a track and recognize their school’s mascot. 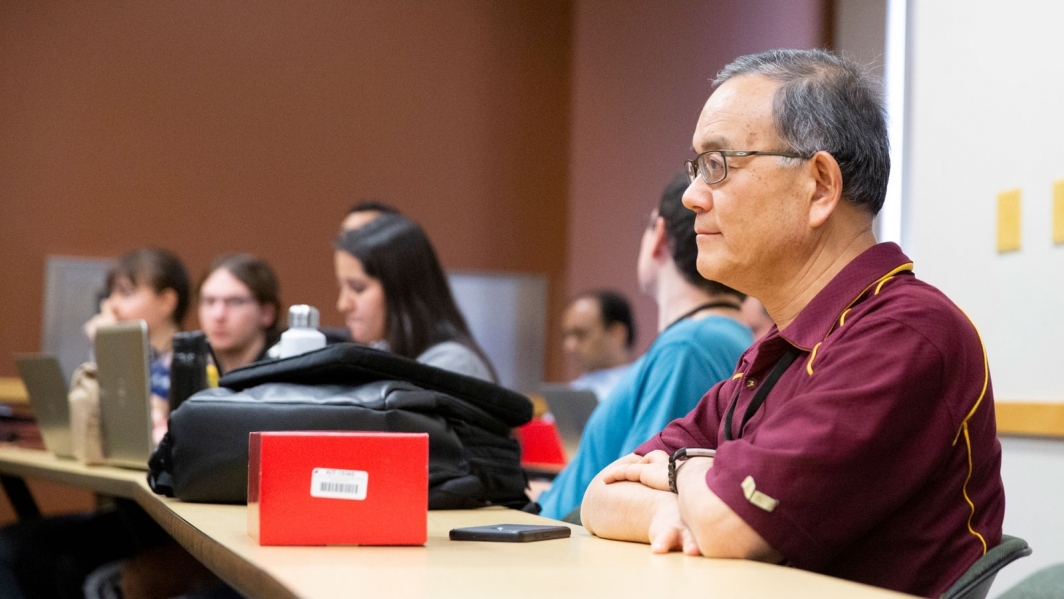 Yinong Chen, a principal lecturer of computer science and engineering in the Fulton Schools, watches the opening presentation with the student participants. Chen helped design the missions student teams had to complete to score points. 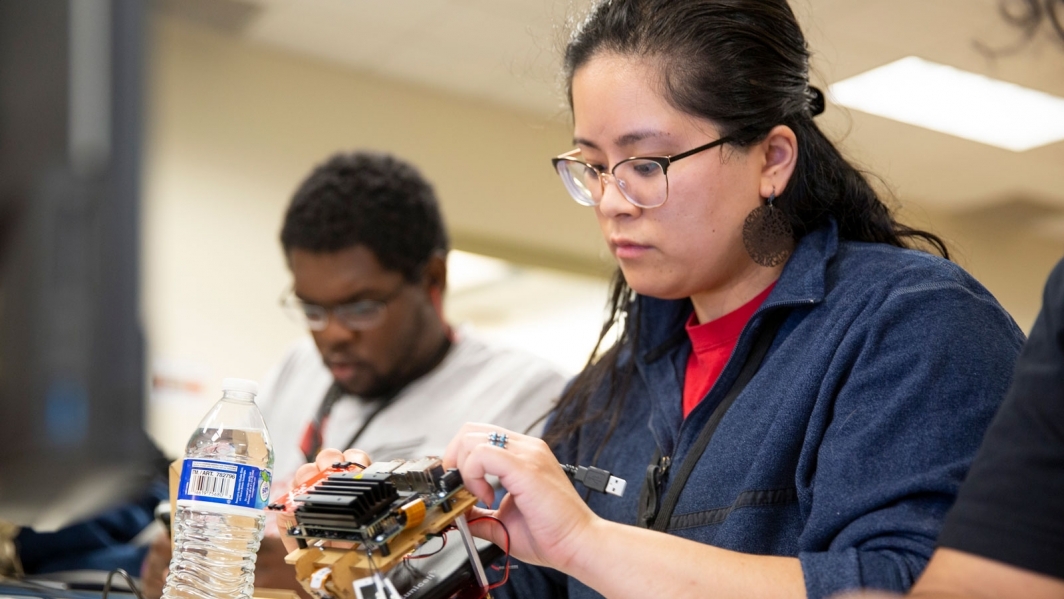 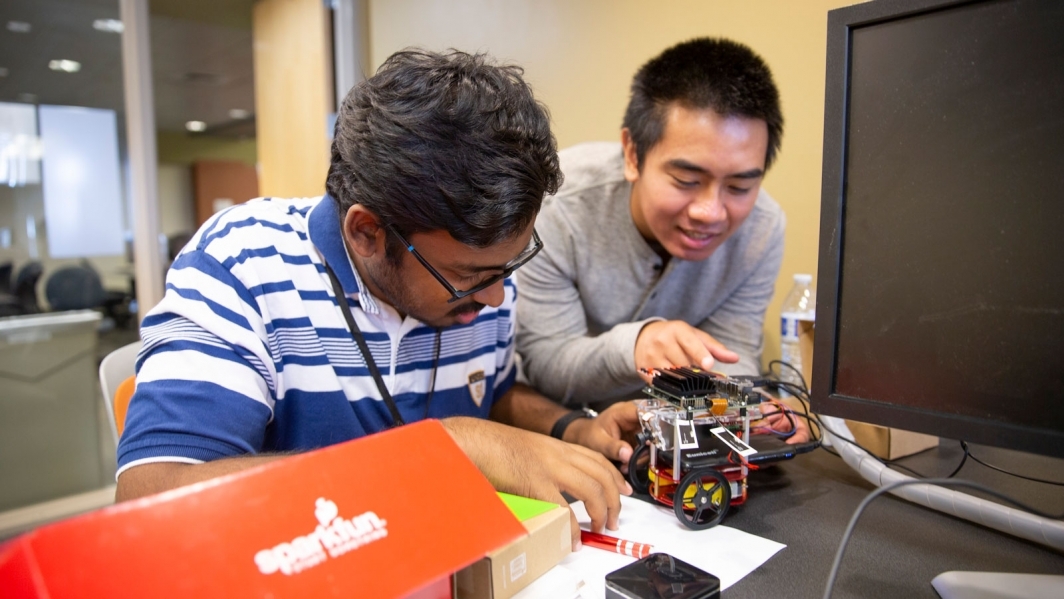 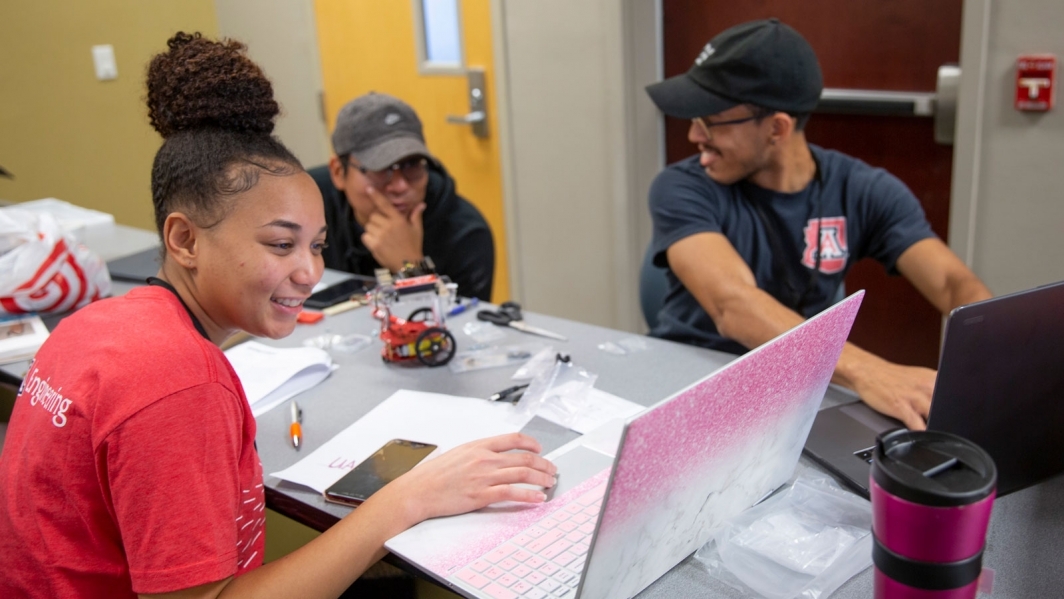 After learning how to use the tools and assembling their SparkFun JetBot robots, student teams completed missions ranging from basic movements, simulated and physical autonomous navigation around obstacles and recognizing their school mascots. 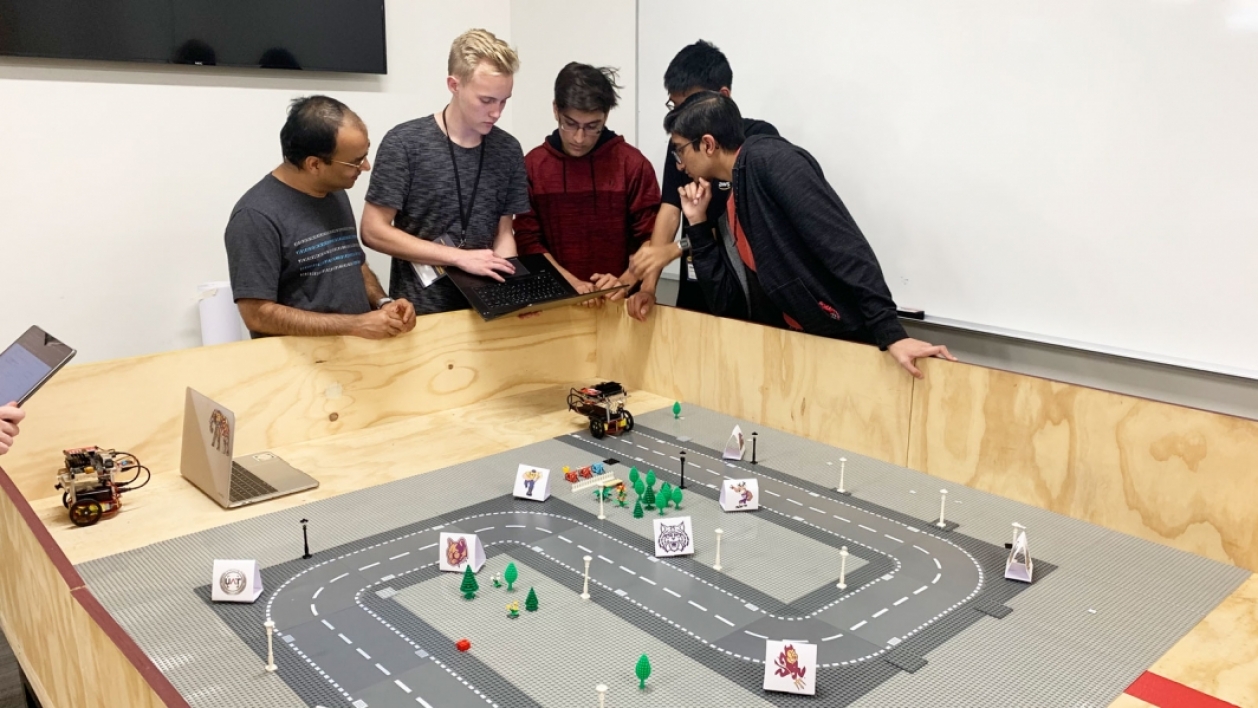 A team of students prepares their robot to race along the track and identify school mascots. Each team was scored on their robot’s speed and its completion of the missions. 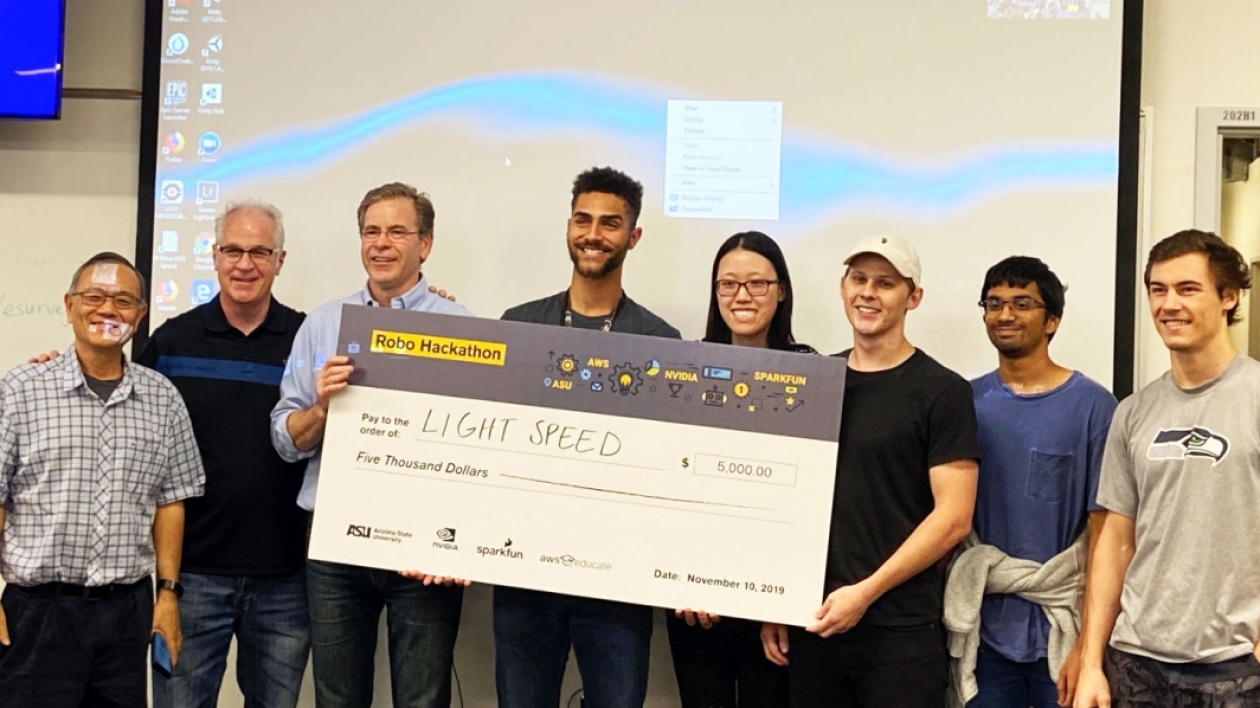 Yinong Chen, a principal lecturer of computer science and engineering in the Fulton Schools, helped design the competition missions that helped students progressively increase their robots’ capabilities to become mascot-identifying racing bots. He says this was a great opportunity for students to apply their classroom knowledge.

“The Robo Hackathon helped Arizona students combine the knowledge they learned in university classes with the cutting-edge technologies and platforms provided by AWS, Nvidia and SparkFun, including robotics, internet of things and machine learning skills,” Chen said.

Over three days, the students learned how to use AWS tools, assembled their SparkFun JetBot kits and machine learning concepts to detect and navigate a path and to classify images. Their missions included basic movements, autonomous navigation around obstacles and recognizing mascots. The participating teams were scored on their speed and completion of the missions.

The students also had to think quickly on their feet when an unexpected speed bump caused the image reading capabilities of the camera to not work as planned.

“Finding existing problems in the system is a part of a hackathon event, and the students did it,” Chen said. “The organizers had to slightly modify the missions to get around the problem, which allowed the students to create a new solution based on the new requirements.”

He says he was impressed by the students’ ability to dynamically adjust to the new challenge by utilizing their understanding of fundamental principles of machine learning and their programming skills.

Chen’s favorite mission was a speed race in which students’ robots had to capture and recognize the track images using machine learning.

“The robot must perform all the difficult tasks in racing conditions,” Chen said. “It is very hard to achieve what the students achieved (in the short time frame of) the hackathon.”

Overall, Chen thought it was an excellent event and a valuable experience for all the students involved.

“The event was well organized and students learned a lot from the hackathon, whether or not they won the cash prizes,” he said.

Team Light Speed from ASU took home first place and $5,000, Team Robin Noodles from ASU was awarded second place and $2,500, and Team CATS from the University of Arizona earned third place and $1,000.

UTO will continue to host hackathons at ASU that apply hands-on skills in high demand in the region. With the popularity of the first Robo Hackathon, UTO will likely hold more opportunities to apply robotics, machine learning and artificial intelligence skills in future events.

Coming off of two road wins, Arizona State volleyball is looking to ride the momentum as two top-25 Pac-12 foes come to town, No. 22 Washington State on Thursday and No. 10 Washington on Sunday. ... Coming off of two road wins, Arizona State volleyball is looking to ride the momentum as two top-25 Pac-12 foes come to town, No. 22 Washington State on Thursday and No. 10 Washington on Sunday.