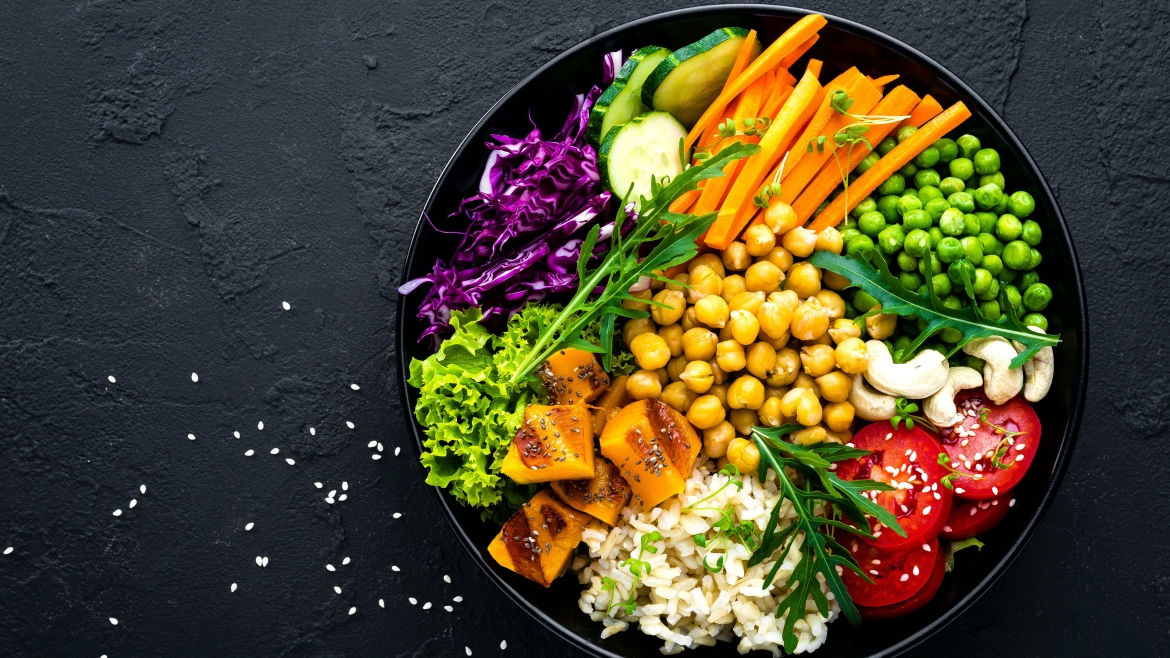 Being a successful vegan is about more than just food

She grew up in New Jersey.

As well as eating a typical omnivorous diet in the land of gabagool and prosciutto, her family owned ice cream stores. They had a separate freezer for ice cream in the house.

Now an expert and leader in vegan living, Patrick-Goudreau recently spoke at Arizona State University on how to become, and stay, vegan. Her new book, “The Joyful Vegan: How to Stay Vegan in a World That Wants You to Keep Eating Meat, Dairy, and Eggs,” was published this month. The talk was sponsored by the Julie Ann Wrigley Global Institute of Sustainability.

Like most children, she always loved animals. But Patrick-Goudreau pointed out that by age 5 or 6, kids have developed a taste for meat. “(Animals) don’t feel the way we do,” her mother told her in the conversation intended to build a bridge between lovable Disney characters like Bambi and dinner. “They’re sacrificing themselves for us.”

“The compassion didn’t go away,” she said. “It just became covered up. … We start to compartmentalize our compassion.”

By the time people become adults, she said, compassion is regarded as sentimentality. But Patrick-Goudreau read a book titled “Diet for a New America,” an exposé on connections between diet, physical health, animal cruelty and environmentalism.

“I stopped eating land animals,” she said. “I was the lone animal advocate in New Jersey.”

She spent afternoons wandering malls with stacks of literature in her hands, talking to anyone who would listen. There weren’t many who would.

Her transformation wasn’t so much about becoming a vegan as it was removing the blanket that had covered her childhood compassion.

“It feels pretty good,” she said.

Then she encountered what she says is a typical reaction to vegans: "We don’t want to know."

“I just figured if I could share (the knowledge) with others, they would change,” she said.

They did not. People are creatures of habit. They eat the same foods and go to the same restaurants and cook the same dishes year in and year out.

“What scares us more than anything is change,” Patrick-Goudreau said.

Deciding to make the jump to veganism is one thing. It’s the rest of it that’s intimidating: Where do I shop? How do I cook? What about travel, where there’s often not many options? What about holidays? Grandma’s going to be heartbroken when you don’t want her Christmas special with the ham hocks in it.

Patrick-Goudreau said her new book attempts to address issues like that. “The Joyful Vegan” goes over a number of steps to help every vegan overcome issues like guilt over not eating Grandma’s holiday special. And there are stages to vegan success.

“I tried whatever I could to give people the tools,” she said. “Food is the easy part.”

It’s the social, cultural and emotional hurdles that are more difficult to surmount.

“It’s not a mystery as to why people struggle and quit becoming vegan,” she said. But freaking out over cooking dinner in the same pan someone once fried pork chops in is not going to get you anywhere.

“Being a vegan is not an end in itself. … I aspire to be as compassionate as possible.”

Speak your truth when coming out as vegan, she said, but spare bystanders “vegangelicalism.” There’s a line to be walked between passion and proselytization.

“The angry vegan is a stereotype, but stereotypes exist for a reason,” Patrick-Goudreau said. “Beneath anger is sadness. … I don’t think you have to be outraged all the time to show you care.”

Find your voice and learn how to communicate, she recommended.

“I do not want to live among vegans only, to be honest,” she said. “We can’t have one identity dominate all others.”

In the end there are only two options: Be positive or be negative.

“Where you once saw limitation, now you see liberation,” she said. “My message is, ‘Never say never and be open to possibility.’”

Top photo: It might be easy to compile a vegan bowl of grilled squash, chickpeas and other veggies, but coming to terms with the social and cultural obstacles to veganism is harder, says vegan lifestyle author Colleen Patrick-Goudreau. Photo by Yelena Yemchuk/Getty Images/iStockphoto

Researchers from ASU’s Biodesign Institute, in collaboration with colleagues from the University of Illinois, report that they have successfully simulated every atom of a light-harvesting structure in a photosynthetic bacterium that generates energy for the organism. The simulated organelle behaves just like its counterpart in nature, the researchers report. The work is a major step toward under...

The science of hope: More than wishful thinking

Researchers from ASU’s Biodesign Institute, in collaboration with colleagues from the University of Illinois, report that they have successfully simulated every atom of a light-harvesting structure in a photosynthetic bacterium that generates energy for the organism. The simulated organelle behaves just like its counterpart in nature, the researchers report.

The work is a major step toward understanding how some biological structures convert sunlight into chemical energy, a biological innovation that is essential to life, the researchers said. They report their findings in the journal Cell. Researchers used supercomputers to construct a 136 million-atom model of the chromatophore, a primitive light-harvesting structure in purple bacteria. The simulated organelle behaved just as it does in nature, the team reports. Graphic by Christopher Maffeo Download Full Image

The research team, originally led by University of Illinois physics professor Klaus Schulten, continued the work after Schulten’s death in 2016. The study fulfills, in part, Schulten’s decades-long dream of discovering the mechanisms by which atomic-level interactions build and animate living systems.

Schulten decided very early in his career to study photosynthetic systems. Schulten and research scientist Melih Sener, a co-author, have modeled the chromatophore, a photosynthetic organelle that produces chemical energy in the form of a molecule known as ATP, with the help of experimental data from Neil Hunter from the University of Sheffield in a decade-long collaboration. Schulten was fascinated with the chromatophore from purple bacteria as one of the most primitive biological light-harvesting apparatus known.

“He was a physicist; he wanted to understand biology at the physics level,” said Illinois biochemistry professor Emad Tajkhorshid, a co-author on the new study. “But then he realized biology only works if you put all of the complexity into the model. And the only way to do that was with supercomputers.”

Over the years, Schulten recruited and supported collaborators at Illinois and elsewhere to help him tackle the challenge. The team constructed a 136 million-atom hybrid model of the chromatophore using structural and spectroscopic data derived by long-term collaborator Hunter. The effort required a colossal amount of supercomputer power over a period of four years. The work was conducted on the Titan and Summit supercomputer at the Oak Ridge National Laboratory in Knoxville, Tennessee, and on Blue Waters, which is housed at the National Center for Supercomputing Applications at the University of Illinois.

Schulten and his colleagues had already conducted molecular simulations of many of the individual protein and lipid components of the chromatophore, which produces the ATP needed to power a living cell.

“The chromatophore has an antenna, a battery and a motor,” said the article's lead author, Abhishek Singharoy, who worked with Schulten at Illinois as a Beckman Fellow and CPLC Fellow before moving to Arizona State University in Tempe in December 2017. The antenna harvests light, the battery directs that energy to the motor and the motor cranks out ATP, said Singharoy, who is now a researcher in the Biodesign Center for Applied Structural Discovery and professor in the School of Molecular Sciences at ASU. John Vant and Jonathan Nguyen, fellow researchers in the Singharoy lab, also participated in the new study. Singharoy has focused on state-of-the-art computational approaches for capturing cell-scale biological responses with atomic precision. For the current study, his group was able to parse the data from ORNL’s massive Summit supercomputer using the Agave cluster, a high-performance computing resource at ASU. Figuring out how the system worked required putting all the parts together, said Illinois physics professor Aleksei Aksimentiev, who guided the project to completion after Schulten’s death. This meant dissecting the chromatophore with every tool available to science, from laboratory experiments to electron microscopy, to programming innovations that broke down the computing challenge into manageable steps, Aksimentiev said.

Once they had a working model of the chromatophore, the researchers watched simulations that revealed how the organelle functioned under different scenarios. They changed the concentration of salt in its environment, for example, to see how it coped with stress.

When they exposed their simulated organelle to conditions that it typically experiences in the cell, they were surprised by how it behaved. It immediately became less spherical, and certain proteins embedded in the membrane began to clump together.

“We started with a perfect sphere, but very rapidly it became imperfect, with flat areas and little areas with high curvatures,” Aksimentiev said. “And all of that, our calculations reveal, has a biological role.”

The protein arrangement creates patches of positive and negative charges that facilitate the distribution of electrons across the system, the researchers said. The electrons are ultimately swapped for protons that drive an enzyme known as an ATP synthase, the motor that produces ATP.

“Chromatophore structure is like a circuit diagram,” said study co-author Melih Sener, a research scientist at the Beckman Institute for Advanced Science and Technology, where much of the computational work was conducted. “If you know how energy and charges travel in it, you know how this machine works. Chromatophore is basically an electronic device.”

The study confirms that, at the atomic scale, physics drives biology, the researchers said. The work will inform future studies of more complex energy-generating organelles in other microorganisms, and in plants and animals, they said. And it will advance scientists’ understanding of nature’s solution to a perpetual human problem: how to efficiently extract energy from one’s environment without poisoning oneself.

The research was made possible through the National Institutes of Health Center for Macromolecular Modeling and Bioinformatics and the National Science Foundation Center for the Physics of Living Cells, both at the University of Illinois. Aksimentiev and Tajkhorshid also are also affiliates of the Beckman Institute. All the computations were supported by first Schulten’s and then Singharoy’s Innovative and Novel Computational Impact on Theory and Experiment (INCITE) grant with the Department of Energy. The Arizona leg of the work in Singharoy’s laboratory was also supported by Research Corporation for Science Advancement and the Gordon and Betty Moore Foundation.