All plants need carbon dioxide, or CO2, to live. They extract it from the air and use it during the photosynthesis process to feed themselves.

But what happens to aquatic plants? How do they get carbon dioxide? 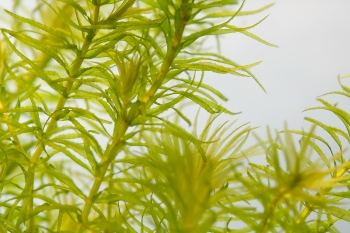 When present, water reeds like this Elodea nuttallii are often the dominant plant cover in lakes and rivers. They grow fast and are capable of using bicarbonate in photosynthesis. Photo courtesy Lars Iversen Download Full Image

Some have partial terrestrial forms, such as floating leaves or above-water growth, which allows them to use carbon dioxide from the atmosphere. But for plants that live completely submerged in water, CO2 is limited and many of these plants have developed a mechanism to tap into other carbon sources. In this case, they extract it from bicarbonate — a naturally occurring mineral that comes from the weathering of soils and rocks. The runoff of that process reaches the plants.

In a paper published today in Science, researchers from Arizona State University's School of Life Sciences found that not only are freshwater aquatic plants affected by climate, they are also shaped by the surrounding landscape.

“In this study, we’re able to show that yes, when in an environment where carbon dioxide is limited, then plants use strategies to extract carbon from bicarbonate,” said Lars Iversen, principal investigator for the study and a research fellow at the School of Life Sciences. “We see this in local rivers and lakes, but we also see this across the globe. We have identified patterns across ecoregions and there’s a direct link between the availability of catchment bicarbonate and the ability of aquatic plants to extract carbon from that bicarbonate.” 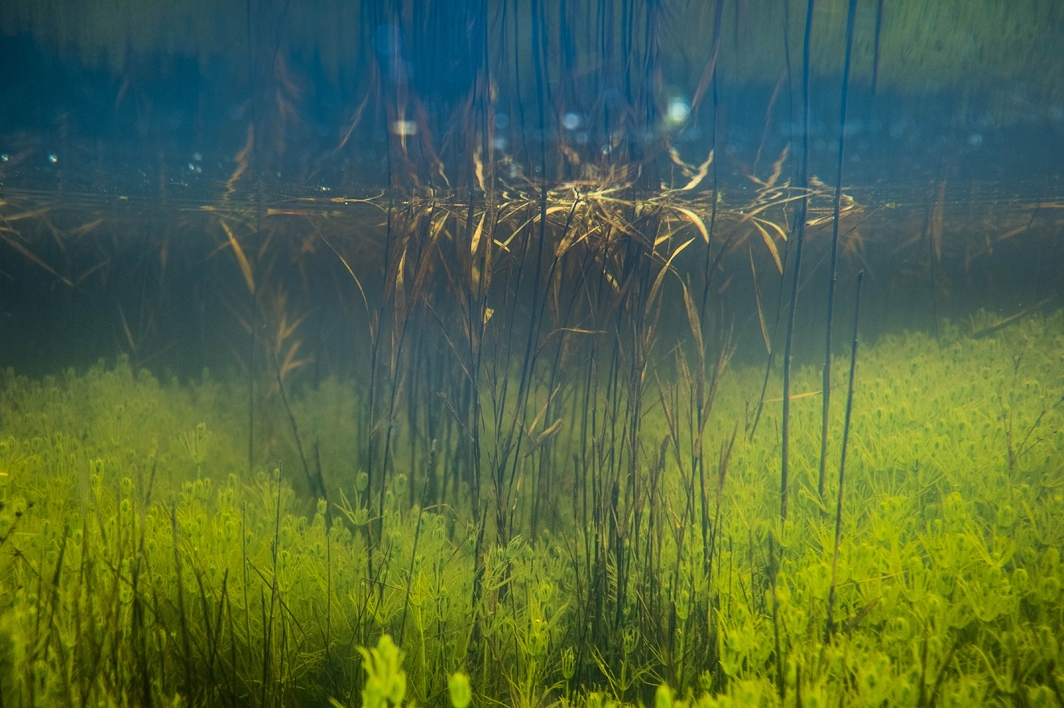 In aquatic environments, plants fight for light and carbon to maintain photosynthetic activity. Since CO2 is limited in freshwater, many species have developed alternative carbon resources. Some have partial terrestrial life forms, such as floating leaves, and thereby have access to atmospheric CO2. Others, like these green stoneworts, are able to use bicarbonate HCO3- as a carbon source. 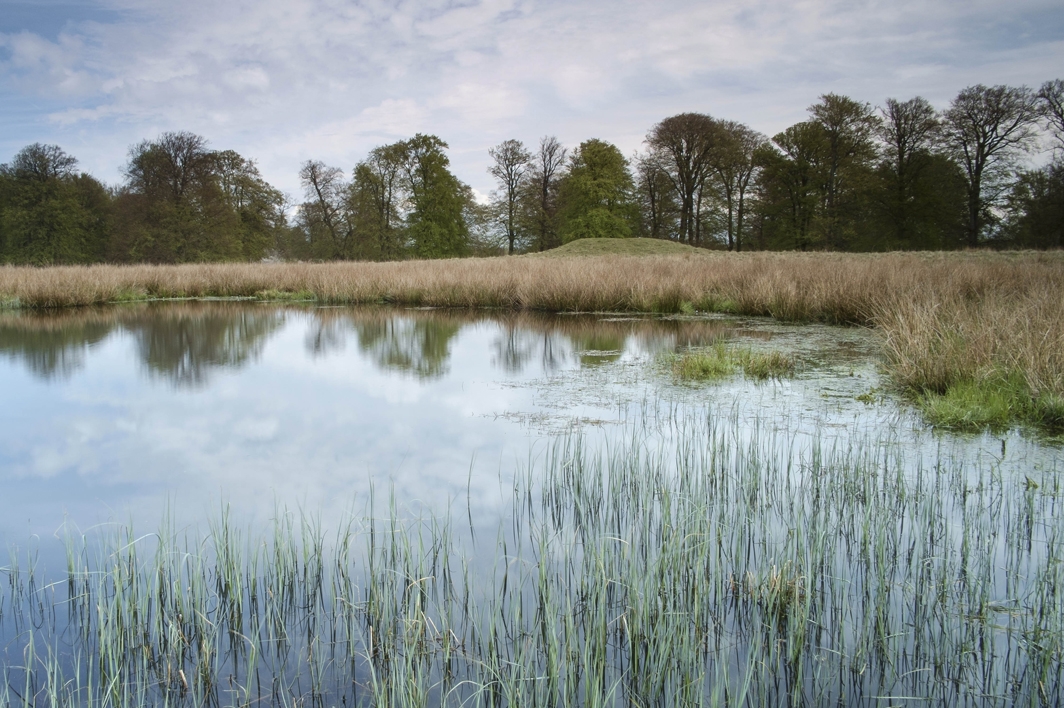 Photosynthesis activity and growth of aquatic plants in lakes and ponds are restricted by limited CO2 concentrations in these habitats. In order to maintain growth via photosynthesis, many plant species in standing waters have developed alternative carbon uptake strategies by using bicarbonate. Species of starworts are usually unable to use bicarbonate in their photosynthesis. Hence, these are primarily found in dense underwater cushions in streams. 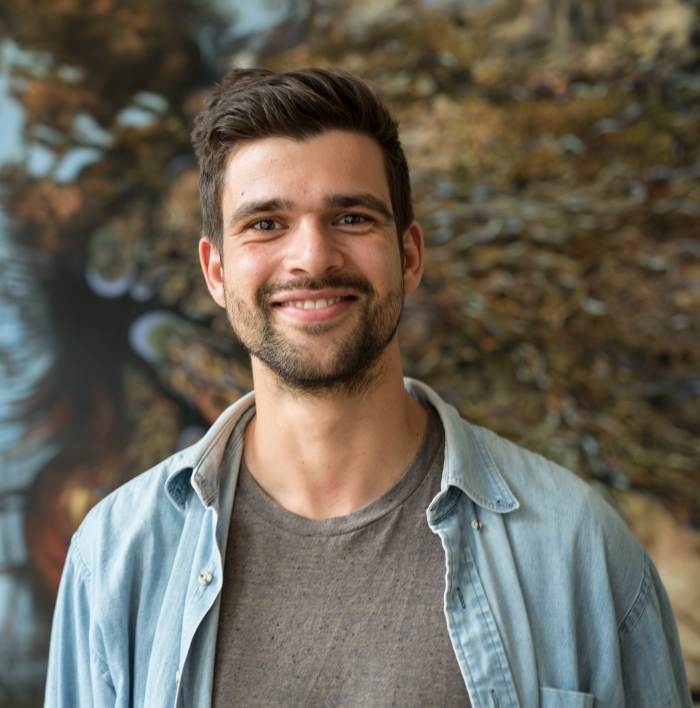 Lars Iversen, a research fellow with ASU School of Life Sciences, found that certain aquatic plants use bicarbonate as a source of carbon to use in photosynthesis. His current research is focused on how these findings scale to sustainability in freshwater systems. He's working to establish sustainability targets for global river systems and learn how freshwater systems are changing.

The study, which focused specifically on aquatic plants that live completely submerged, also showed that when plants have easier access to carbon dioxide, they will use that as their carbon source, even if bicarbonate is available.

“One of the main points of this study is that aquatic plants are different. We cannot use our extensive knowledge about terrestrial plants in the same way as aquatic plants,” said Iversen, a researcher in Assistant Professor Ben Blonder’s ecology lab. “This is really important because, on a global scale, at least one-third of the human population is very closely linked to freshwater systems. So things like deltas, drinking water and fishing grounds are critical to human survival. If we are to understand how these systems will persist and change within the next 100 years, then we really need to know how some of the main components and structures in freshwater systems are working.”

Environmental changes caused by human activity, such as deforestation, land cultivation, and the use of fertilizers, are causing large increases in bicarbonate concentrations in many freshwater bodies around the world. Iversen said the insight from this study will help researchers evaluate how ecosystem functions change if concentrations of bicarbonate increase.

Iversen’s research is funded by the Carlsberg Foundation (CF-17-0155 and CF-18-0062). Colleagues from 14 additional institutions located in Finland, Denmark, Germany, Canada, Sweden, Estonia, Poland, Norway, the U.S., Kenya, the U.K. and Australia participated in this study.

Michael Spangenberg said he was always that “one weird dude” in his Chandler classroom who was born in Arizona. Still, he didn’t realize that Arizona was the 48th state to join the country.“Now I do,” said Spangenberg, co-founder of the popular State Forty Eight apparel company.Spangenberg and his partners were honored Wednesday with the Spirit of Enterprise Award by the Economic Club of... Michael Spangenberg said he was always that “one weird dude” in his Chandler classroom who was born in Arizona. Still, he didn’t realize that Arizona was the 48th state to join the country.

Spangenberg and his partners were honored Wednesday with the Spirit of Enterprise Award by the Economic Club of Phoenix, part of the W. P. Carey School of Business at Arizona State University, given annually to a business that exemplifies excellence and ethics in entrepreneurship.

In his talk, he described how he and co-founders Stephen and Nicholas Polando, who are brothers, grew their business from a side hustle to a brand that sells $4 million in clothing and hats a year.

Spangenberg always loved clothing and was huge fan of all the Arizona sports teams.

“My favorite thing was back-to-school shopping,” he said. “It drove me nuts that I never saw anything that represented Arizona in a positive way.”

He always wanted to have his own clothing line, even as he was working in the hotel industry.

“I was probably writing down names in a book for two years, but no clothing line ever made sense,” he said. It was 2012 and he was roommates with Stephen Polando, a childhood friend.

“Stephen was brushing his teeth and he came out and he said, ‘State Forty Eight.’ It was an ‘aha’ moment,” Spangenberg said.

Nicholas Polando was a self-taught graphic designer who then came up with some logo ideas.

“He proposed three and two were bad,” Spangenberg said.

So the three became equal business partners, gathered together $1,500 to trademark their logo and launched State Forty Eight in 2013 — all while keeping their full-time day jobs. 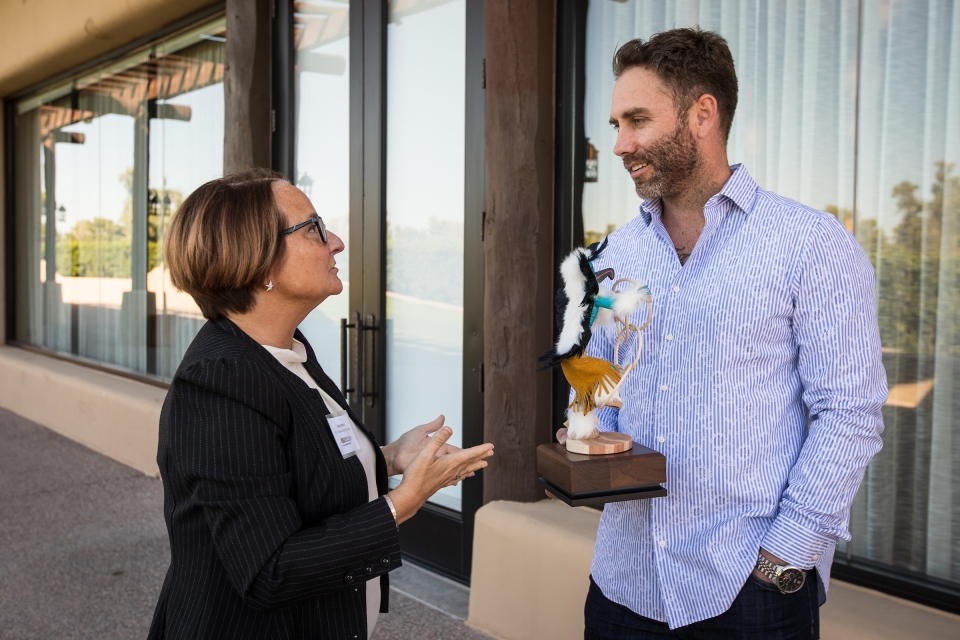 Michael Spangenberg holds the Spirit of Enterprise Award while chatting with Amy Hillman, dean of the W. P. Carey School of Business, who said that State Forty Eight is about "inspiring others to rise up and stand for something they believe in." Photo by Charlie Leight/ASU Now

“The first two years, we didn’t earn a dollar,” he said. “We were selling T-shirts at launch parties on Mill Avenue and at First Friday when First Friday wasn’t even cool.”

They built their own website and ran their own social media. They scoured Craigslist for a thermal heat press and when they collected enough profits, they would make a new batch of T-shirts.

“I’m not the most handy guy and I made shirts backwards and upside down,” he said. “We were hustling.”

A turning point came in 2016 when they scraped together $1,500 to join the Phoenix Fashion Week’s emerging designer boot camp.

“The thing that stood out from that was learning how to sustain the business,” he said. “It wasn’t just a glamor runway show.”

They started networking, and found a connection to Bruce Arians, then the coach of the Arizona Cardinals. That led to the now-famous State Forty Eight T-shirt that featured Arians’ likeness with his trademark flat-top cap and game-day headset. Sales of the shirt benefited the Arians Family Foundation, which fights child abuse.

“We couldn’t keep the shirts in stock and we raised a ton of money for the foundation,” Spangenberg said. “And it was an example of how we were laying the foundation to be doing more than just selling T-shirts and hats.”

That success led to partnerships with the Arizona Diamondbacks, the Phoenix Mercury and the Phoenix Suns, as well as fundraising collaborations with other organizations including Phoenix Children’s Hospital, the Arizona Humane Society and the W. P. Carey School of Business.

But as the company grew, there were challenges too.

“We have three equal business partners and that’s a huge blessing because you see different perspectives, but I’d be lying if I didn’t say we had disagreements,” Spangenberg said. “And when you’re young, there’s a lot of pride involved and you have to put that aside.”

The three were able to pour all the revenues back into the company before finally leaving their day jobs to become full-time State Forty Eight employees, which the two brothers did before Spangenberg.

“I wanted to be there full time and that’s where those communication barriers came into play. I would try to catch up after work and they’d be tired of me texting at midnight,” he said.

“The sexy thing to do is to go for it but that’s not the real world. It’s OK to have a side hustle until it’s a full-time hustle. It allowed us to grow.”

The company now has 15 employees, with seven full time. And they’re still learning how to run a business efficiently.

“It’s hard to have those honest conversations but now we have weekly meetings on Tuesdays that we don’t miss,” said Spangenberg, who still personally runs the State Forty Eight social media accounts.

“When you don’t have meetings, things build up and then you talk over text and that’s how things get misperceived. It seems simple but it’s been a huge help.”

The collaborations have doubled State Forty Eight’s online revenue and now the company sells other branded merchandise, including stickers, glassware, bags and socks. It recently launched a co-branded credit card and set up two retail locations, in Gilbert and at the Churchill in downtown Phoenix. In the future, Spangenberg would like to see a State Forty Eight license plate and maybe a sports travel group.

“Twenty years from now, everyone at the Diamondbacks games will be a Diamondbacks fan and be proud of where they’re from,” he said.

“And we want to be the face of Arizona.”

Top image: Michael Spangenberg describes the journey of State Forty Eight, the company he co-founded, at the Economic Club of Phoenix luncheon on Wednesday, where he accepted the Spirit of Enterprise Award. Photo by Charlie Leight/ASU Now