When people move to the United States, their journey to assimilation is a complex process that involves change for everyone in the community, according to two authors who have studied this contemporary issue.

Reihan Salam, author of the upcoming “Melting Pot or Civil War: A Son of Immigrants Makes the Case Against Open Borders,” and Tomás Jiménez, author of “The Other Side of Assimilation: How Immigrants are Changing American Life,” spoke at Arizona State University on Wednesday night. Their talk, titled “Becoming American: Immigration and Civic Integration,” was sponsored by the School of Civic and Economic Thought and Leadership at ASU.

The two men discussed how assimilation is not an either/or event.

“Assimilation is a moving target,” said Salam, who is executive editor of the National Review.

“If you’re trying to define it very narrowly, it’s becoming more like the ‘average person,’ but immigration changes the nature of the country over time. You’re not hitting a fixed target.” 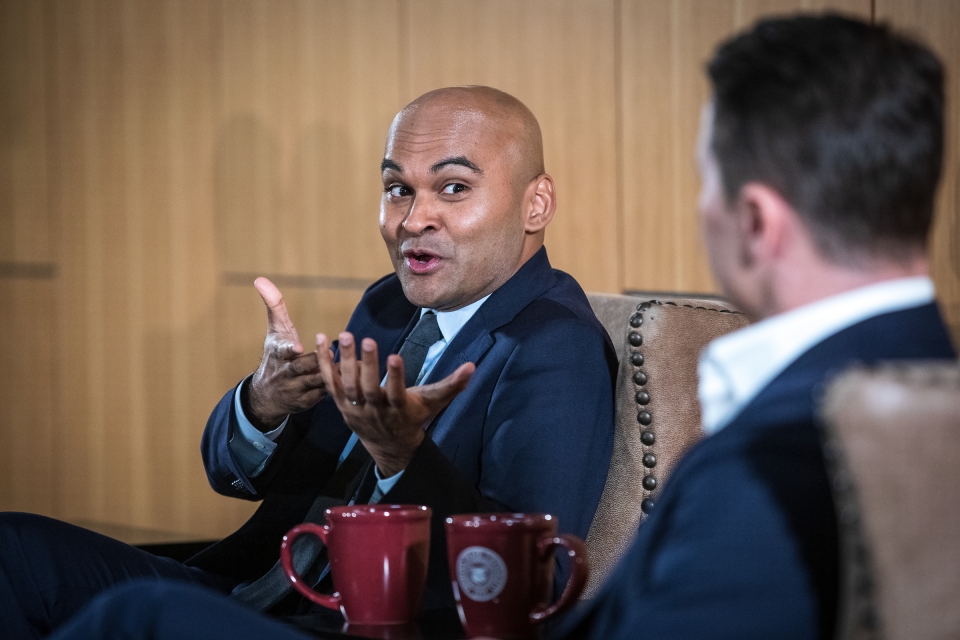 Reihan Salam,who spoke at ASU Wednesday night, is author of the upcoming “Melting Pot or Civil War: A Son of Immigrants Makes the Case Against Open Borders." Photo by Charlie Leight/ASU Now

There’s also a difference between immigrants who circle back and forth from America to their home country and those who never return.

“Vietnamese immigrants, in the wake of the Vietnamese war, were among the most assimilated mostly because there was an expectation that Vietnam was not a homeland that one could return to regularly,” he said.

“There’s a back and forth volley of adjustment and readjustment happening in a cultural context, with respect to notions of success and failure in school, and with respect to the notion of who belongs and on what basis,” said Jiménez, who is professor of sociology and comparative studies in race and ethnicity at Stanford University.

“If I had to distill it down, it’s the decline of an ethnic boundary, when people see each other as more similar than different.”

Population demographics in America have changed over time, and that’s shaped attitudes toward immigration, Salam said.

He noted that the share of the foreign-born population has increased sharply, to about 13%, in the context of a steep decrease in the number of native-born children. Decades ago, people believed that investing in their community would mostly benefit their own descendants, but that’s no longer the case.

“It has to do with replenishment. It’s a game of numbers,” he said.

“I believe it’s one reason why you see such intense polarization around these issues.”

“One of the most underappreciated events in the demography of immigration is the end of a mass wave of Mexican immigration that had gone uninterrupted for 100 years, and it came at the end of the Great Recession,” he said.

Both men agreed that the current immigration system, with waits of a decade or longer, is inefficient and inhumane, but they differ on how open the process should be.

“Today’s immigrants come overwhelmingly from Asia and Latin America and those immigrants, across the generations, are integrating as fast if not faster than the immigrants of the great European immigration from the late 19th and early 20th centuries,” Jiménez said. Tomás Jiménez, who spoke at ASU Wednesday night, is author of “The Other Side of Assimilation: How Immigrants are Changing American Life." Photo by Charlie Leight/ASU Now

Mass legalization of the 11 million undocumented immigrants in the United States would speed that integration, he said.

“The condition of illegality is not only a drag on their integration, it’s a drag on the integration of subsequent generations,” he said. “We know from social science research that the penalty reverberates three generations into the future.”

He said that the DACA program, which is not legalization, still benefitted the young people it affected.

“The most recent polling shows that 80% of the American public favors a legalization program.”

Salam said that immigration used to be thought of in the context of the need for a lot of low-skilled labor, but with that need decreasing and the need for highly skilled labor increasing, the conversation has changed.

“I believe our system is incoherent and does not align with the values and sensibilities of a majority of America,” he said. “In our system, now you have a wait list of over 4 million people in the queue for family preference visas. If you have a job offer in the U.S. and speak English fluently, guess what? You cannot move up the queue.”

He said that the U.S. should establish a pathway of skills for immigrants, including avenues for refugees and asylum-seekers.

“When it comes to skills I believe in a blended approach rather than the binary approach we have now, where you’re either an affluent, sophisticated, highly skilled person or an underdog,” Salam said.

“Another way to think of it is a system that serves as a roadmap: ‘Here are the things that it takes for you to thrive and survive in this country.’ We want a policy that protects a certain kind of continuity and in light of a changing safety net.”

Top image: Reihan Salam (left) and Tomás Jiménez immigration at the SCETL Civic Discourse Project talk, "Becoming American: Immigration and Civic Integration," on Wednesday at the Memorial Union. The talk was part of the school’s Civic Discourse Project, now in its third year, with the theme “Citizenship and Civic Leadership in America.” Photo by Charlie Leight/ASU Now

It’s been more than 25 years since Clinton Ang graduated from Arizona State University, yet he can recall with ease the feeling of arriving on campus and walking down Palm Walk for the first time on that hot summer day.“I checked into Palo Verde West where I was staying in the dorm and then I walked down Palm Walk and you know — everyone was nice and freely dressed — and I thought, ‘OK ...

It’s been more than 25 years since Clinton Ang graduated from Arizona State University, yet he can recall with ease the feeling of arriving on campus and walking down Palm Walk for the first time on that hot summer day.

“I checked into Palo Verde West where I was staying in the dorm and then I walked down Palm Walk and you know — everyone was nice and freely dressed — and I thought, ‘OK I could get used to this,’” Ang said. 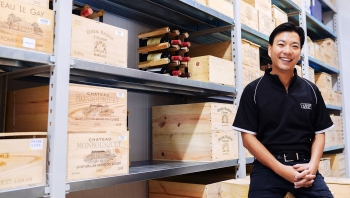 Clinton Ang will be honored as one of The College Leaders at a ceremony this fall. Download Full Image

Ang graduated in 1994 with dual degrees in psychology and computer information systems, the latter of which was a result of his father’s doubt about his chosen path.

“I first chose psychology because when I joined, I was 17 years old and didn't really know what I wanted to do except play badminton and enjoy life. So I chose a discipline which I always kind of enjoyed: behavioral psychology,” he said. “Then, after a semester, I spoke again to my father and he said, ‘What are you going to do with a psychology degree? I think you better think about taking something more serious, you know?’”

Today, Ang serves as the managing director of CornerStone Wines and as chairman of the board of Hock Tong Bee wholesaler and distributor of wines, which was originally founded by his great grandfather, Ang Soo Seng. CornerStone Wines has grown to have a presence in 28 countries and a staff of 100 employees. As a trained fund manager, Clinton also manages the family’s equity holdings, which are spread across jurisdictions including Hong Kong, Europe and the U.S.

He credits his psychology degree with giving him a foundation of emotional intelligence (EQ), which has proven beneficial in his career.

“I think it helped me a lot on the EQ side. It's very important to be able to observe a situation and then be able to reflect very quickly and decide on the right approach,” he said. “I can't say that I am perfect in doing the EQ side, but I would say that my psychology degree has definitely helped me improve.”

Ang describes his years at ASU as the “university of life.” He arrived from his home in Singapore to ASU on an athletic scholarship for badminton. While he had been accustomed to traveling for the sport since a young age, like many students, college was the first time he experienced full independence and he quickly embraced it by seeking opportunities on and off campus.

“I got involved with sports, with ESP, with the honors college, with all the various colleges, the international students club, Singapore Students Association, the Asian Coalition, and wow, quite a few others,” he said. “It was awesome."

Additionally, former ASU President Lattie Coor recommended Ang for a then-new role as a university survival specialist at the educational support program to help provide support to other ASU students. And Ang also pursued entrepreneurial opportunities buying and selling home goods and products such as tables, chairs and TVs to fellow students.

Ang had no shortage of experiences at the university and his advice to current and future students is to live similarly: “You know, we want to look back at the time that we spent in college and know that we have enjoyed life to the fullest and not regret (anything).”

He said his time both inside and outside the classroom provided lessons he continues to draw on today.

“I'm really thankful for ASU and for my days in The College. Everything that happened there, everything that I was exposed to, really molded me and gave me opportunities, perspectives and readiness for life,” he said.

This fall, Ang will be honored as one of The College Leaders for his career achievements, adding to a lifetime of awards and honors.

Other awards Ang has received include: