Why do some people struggle with alcohol use?

To answer this question, scientists look at genetic factors and also environmental influences, like familial and peer relationships. Knowing which gene to study is a difficult problem though: If you stretch out all the genes in a person — called the genome — it would be twice the width of the solar system! 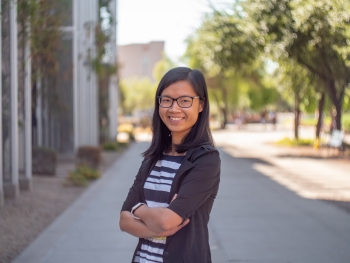 One way scientists figure out where to look in the genome is by using large databases that include many thousands of complete genomes. But these databases include genetic information from people of mostly Caucasian ancestry, with minority populations making up only about 20% of the available genetic data.

Arizona State University’s Jinni Su, a new assistant professor in the Department of Psychology, wants to change that by working to increase the participation of minority populations in genetic research.

“To study how genes and someone’s environment interact to predict health outcomes in minorities, we have to increase the representation of these populations in genetic research,” Su said.

To understand how genetics and environmental factors interact to influence behavior, Su sometimes uses previous research that has identified which parts of the genome are associated with a specific trait like predisposition to a disease or behavior. But, complex traits like substance use disorders are not always associated with a single gene or group of genes. Su also uses a rating called a genome-wide polygenic score that looks at how an entire genome is associated with a trait. She then closely examines how a part of the genome, or the entire genome, combine with a person’s environment to influence a behavioral trait like problem drinking.

“I take information about genome-wide associations from large studies with hundreds of thousands of people and apply it to smaller samples of people to ask questions about the processes underlying substance use disorders,” Su said. “This way, I can look at how family environment and peer influences might buffer or exacerbate genetic risk.”

Su has studied how a variant in a gene called 5-HTTLPR and someone’s family environment interact to contribute to drinking behavior. This gene is involved in the transport of the neurotransmitter serotonin and is linked to mood and control of behavior. The short version of the 5-HTTLPR gene is associated with persistent alcohol use in adolescents and young adults. In a recent study that included over 13,000 teenagers, Su looked at how the combination of this genetic variant and parenting style affected drinking behavior. Male teenagers with the short version of the 5-HTTLPR gene who had a better relationship with their mother were less likely to have alcohol use problems. Su did not find a similar effect for females with the short version of the gene.

Su also recently published a study examining how a genome-wide polygenic score for alcohol dependence, family history and peer relationships combined to affect drinking behavior in African American college students. A family history of alcohol problems was associated with alcohol use at the beginning of college, and unhealthy peer relationships predicted symptoms of alcohol use disorder throughout college.

The interaction of genetics and environment did not affect drinking behavior. This absence of a finding does not mean that genetics and environment did not interact to affect drinking behaviors in African American college students. It means there was not enough genetic data from African Americans, who only make up 3% of the information in the large-scale databases used to calculate the genome-wide polygenic scores.

Su said the results of this study also highlight the importance of accounting for culture when studying minority populations because the strength of influence from an environmental factor can vary across different cultures.

“Some experiences are more salient for minority populations, such as racial discrimination,” Su added. “Also, the practice of parents instilling pride in their children about their race, ethnicity, and culture likely plays an important role in how environmental influences affect minority populations.”

The path forward at ASU

Since arriving at ASU, Su has founded the Genes, Environment and Youth Development lab in the Department of Psychology. One of her first research projects will begin increasing the representation of minority populations in genetic research. She is in the planning stages for a study of how genetic and environmental factors affect mental health and substance use behaviors in Latino college students.

“My passion is to increase the representation of minority populations in genetic research, bringing a more culturally-relevant approach to the study of genetic and environmental interactions in substance abuse disorders, with the ultimate goal of informing culturally-tailored, personalized interventions,” Su said.

@ASUWrestling’s Chad Porter to Compete at U23 World Championships

Tempe, Ariz. – After competing at the 2018 Junior Worlds in Trnava, Slovakia last year, redshirt sophomore Chad Porter will move up an age division and represent the United States in Greco-Roman at the U23 World Championships, set to begin Oct. 28-Nov. 3 in Budapest, Hungary. ...

@ASUWrestling’s Chad Porter to Compete at U23 World Championships Tempe, Ariz. – After competing at the 2018 Junior Worlds in Trnava, Slovakia last year, redshirt sophomore Chad Porter will move up an age division and represent the United States in Greco-Roman at the U23 World Championships, set to begin Oct. 28-Nov. 3 in Budapest, Hungary.