The award is presented to an indigenous professional who has made contributions to the STEM fields — science, technology, engineering and math — by developing a product or a solution and is actively involved in the Native American community. 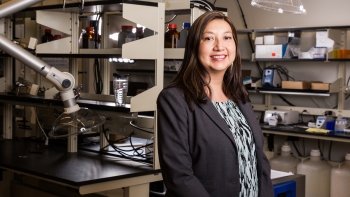 Conroy-Ben, an assistant professor of environmental engineering in Arizona State University’s Ira A. Fulton Schools of Engineering, was one of five 2019 recipients of the AISES Professional of the Year Award presented at the organization’s national conference in Milwaukee on Oct. 10-12.

Conroy-Ben, who is of Oglala Lakota descent, got involved with AISES as an undergraduate student and has increased her involvement over the years. She was a recipient of an AISES graduate student research award and later joined the organization’s board of directors. She is currently involved in the mentorship program.

“This is an organization that's near and dear to my heart, and so I was thrilled to be recognized for my hard work and my years of dedication to the organization,” Conroy-Ben said.

Since she joined the Fulton Schools in 2016, she has continued to be active in the organization as an adviser to the ASU chapter of AISES.

Now a tenure-track faculty member, Conroy-Ben studies environmental endocrine disruption and antibiotic-resistant genes that arise from wastewater, as well as the transport of microbes in water. Her work on the biological effects of polluted water has direct applications to the challenges facing the tribal communities she works with.

As an engineer, Conroy-Ben has been focusing on improving the lives of people in local tribal communities. Her research lab, the Emerging Contaminants Laboratory, focuses on wastewater contaminants and epidemiology. Beyond laboratory research, she also works directly with members of the tribal communities to better understand their needs and to provide her expertise in water quality.

Conroy-Ben was nominated for the award by Fulton Schools Professor Rolf Halden, director of the Biodesign Center for Environmental Health Engineering at ASU. Halden and Conroy-Ben are collaborating on tests to evaluate the overall health and potential environmental threats facing Native American communities.

“I think that Conroy-Ben is an exceptional faculty member for multiple reasons, for the work she is doing as well as for her cultural background,” Halden said.

“The fact that she is one of the few, if not the only, female environmental engineering professor of Native American descent puts her in a position to understand the environmental health concerns that exist in Native American communities and reservations across the nation and to implement interventions that can improve both the water quality and the health status of those communities.”

Conroy-Ben credits much of her success working with tribal communities in the Southwest and the Great Plains region to the vast resources ASU offers to help connect with these communities.

“ASU's a great place; we have a lot of support not only for students but for faculty and staff when it comes to tribal initiatives,” Conroy-Ben said.

“There is an administration, there's two associate VPs for Indian affairs, and to bridge that work, they have introduced me to some local tribes interested in agriculture, air pollution and water. I wouldn't have had that opportunity at any institution that doesn’t have these types of positions or doesn’t have those strong relationships with the local tribes.

“Part of the process is going out in the community, meeting with the tribal institution review board, and working with them, not only doing research but different services that I can provide as an engineer or as someone who specializes in water quality.”

Her efforts to provide cleaner water to tribal communities in Arizona and the Great Plains have taken four years to come to fruition.

“I would say that working with these tribal communities does take time,” Conroy-Ben said. “I started these projects when I first arrived at ASU, but to go through the tribal approval process and then to look for funding and get preliminary results, we're just now seeing the effects of all of this hard work four years later. It's not like working with just any community — it takes time.”