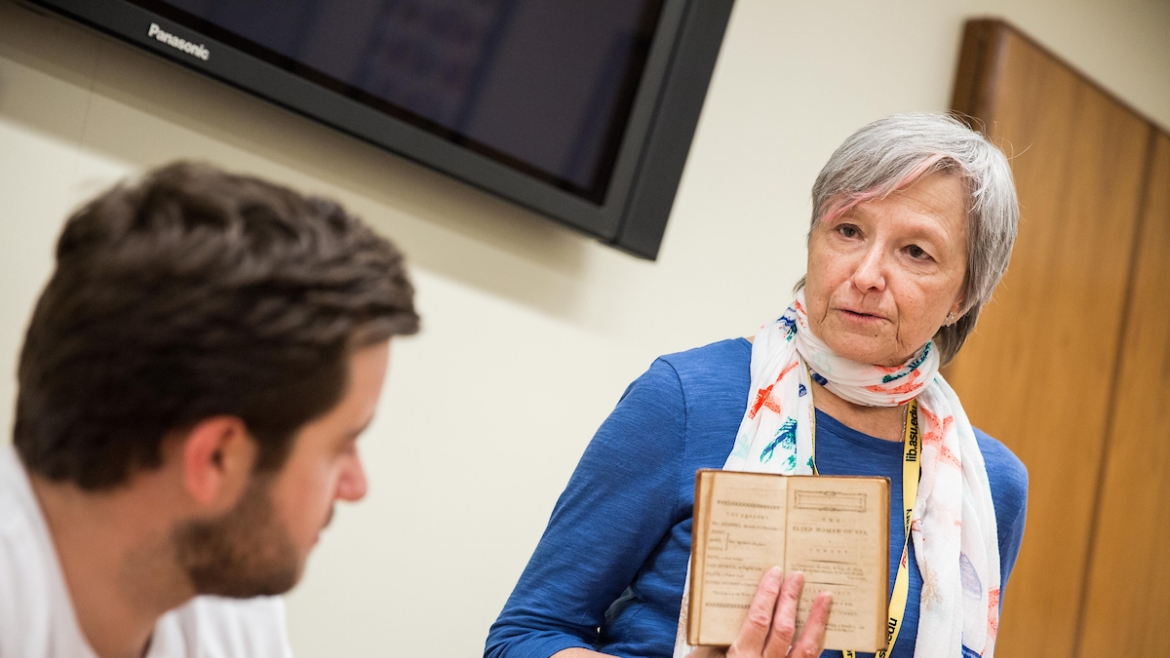 It’s a phrase that gets thrown around quite a bit among scholars and practitioners in the field of theater for youth.

And call they do.

They call with questions about scripts and set designs. A director might have a question about a play. A student will call wanting to know more about the history of a writer.

Others are interested in starting up a theater company of their own and want to know how to do it.

And so they call Katherine Krzys, a woman whose name has become nearly synonymous with the Child Drama Collection, an internationally acclaimed archive for theater for youth which began at Arizona State University 40 years ago and which Krzys has curated for the last 35 — a career from which she has announced she will retire at the end of this year.

“The hardest thing is convincing people that history is important,” said Krzys, who also has served as curator for ASU Library's Rare Books and Manuscripts, and in recent years facilitated the acquisition of the Civic Classics Collection, which includes first editions of “The Federalist” and writings by Frederick Douglass, Susan B. Anthony and the Rev. Dr. Martin Luther King Jr. “I always say, if I can talk to you for five minutes and show you something in the archive, you will come back.”

The Child Drama Collection began rather informally, the way one might imagine most things did in the 1970s.

Lin Wright, former chair of what was then known as the Theatre Department at ASU, had arrived in Tempe in 1973 at the urging of her colleague Don Doyle, who was teaching courses in creative drama at the time at ASU.

Wright wanted to develop a graduate program in theater for youth, a small but burgeoning field that was taking on new life in the hands of artists and scholars who were further exploring theater as a tool to teach and connect with children.

Wright understood the value of a research collection, one that might bring in the kind of materials that would allow an MFA and doctoral program to flourish. More than that, she had the connections in the field to make it happen; Doyle had introduced Wright to one of the field’s founders, Rita Criste.

“Rita Criste showed up on my doorstep with 32 boxes,” recalled Wright, who hosted Criste for several days at her house, where they ate many sugary snacks and sorted through her papers documenting one of the earliest creative drama programs in the country. The program, led by Criste, had been taught in the public school district of Evanston, Illinois, where Criste had been a teacher. “The first texts in the field that were written came out of that program. She was under-recognized, which was why it was so important to have her papers.”

Armed with Criste’s materials and another 100 boxes belonging to the Children’s Theatre Association of America, Wright began approaching Marilyn Wurzburger, then head of Special Collections at the ASU Library, to see about kickstarting a research collection, which Wurzburger was able to get greenlit in in 1979.

“I had no appreciation for what the Child Drama Collection was going to develop as. It was an unusual collection, unlike anything we had before,” said Wurzburger, who was unprepared for the variety of materials that began entering the doors of Hayden Library: costumes, stage designs, miniature sets. “I was in for a shock and realized we were in the midst of something big.”

Desperately in need of archival assistance, Wurzburger reached out to Wright for help processing the collection. She needed someone with theater knowledge, who could both curate an archive and interface with theater professionals.

Wright had someone in mind.

At 36, Krzys had left California with her 3-year-old daughter and a background in acting and directing to begin the MFA Theatre for Youth program at ASU.

“I wanted to be an actress but found out that wasn’t my forte, because I cried a lot when I didn’t get cast,” said Krzys, who eventually got cast in a children’s production and was hooked. “There is nothing better than performing for an audience of children. They hold nothing back. And just when you think they aren’t paying attention, they come back with the most sophisticated, intuitive response.”

While immersed in graduate work at ASU, Krzys had discovered the Child Drama Collection — and the work of Sara Spencer, who started the first publishing house in 1935 that exclusively printed plays for children. Krzys ended up writing about Spencer for her applied project and, with Wright’s help, got it published as part of an anthology, “Spotlight on the Child: Studies in the History of American Children’s Theatre,” by Roger Bedard and C. John Tolch.

Krzys’ interest in the history of the field, coupled with her experience as an actor and director, and now scholar, gave her a unique perspective in carrying out the work of an archivist in the Child Drama Collection and made her a powerful force in growing it.

She began assisting Wurzburger part time in 1985 and eventually secured a continuing appointment as a full-time archivist in 1995.

“Kathy was doing such a phenomenal job and the collection began growing tremendously,” Wurzburger said. “When Kathy asked donors for their materials, they often did not refuse.”

In those days, Krzys would just pick up the phone and dial the numbers of playwrights.

“It was easy for me because I knew the field,” said Krzys, who also benefitted from the professional network of Wright and Doyle. “I would say to them, ‘I read your play. I directed your play. Where are your papers going?’”

Many had not yet been asked the question. However, they soon found themselves engrossed in conversation with Krzys about the collection and the history of the field.

“It was Kathy’s charm that played a big part in this process,” said Wurzburger, who routinely hosted the collection’s donors when they came to visit ASU.

“They would sit around my dinner table and talk, and Kathy was always there,” Wurzburger recalled. “I really enjoyed it and so did my husband. This is where I was learning my child drama history.”

As ASU’s theater department grew, so did the collection, and vice versa, just as Wright had planned. The MFA and PhD programs in Theatre for Youth are now among the oldest in the Herberger Institute for Design and the Arts.

Under Krzys’ leadership, the Child Drama Collection swelled in size and became home to a number of high profile collections that today include the prestigious Irene Corey Collections, which took 10 years to acquire; the Jonathan Levy Collection, which expanded research possibilities back to the 16th century; the papers of Lowell and Nancy Swortzell, early pioneers of educational theater in New York; and the David, Sonja and Benjamin Saar Yellow Boat Collection, which documents the writing and production of “The Yellow Boat,” a play written by David Saar, founder of the theater company Childsplay, for his son Benjamin, a hemophiliac who contracted AIDS through a blood transfusion.

“The archive exists the way it does because Kathy has worked so hard to document and keep the field history,” said Stephani Etheridge Woodson, a professor in the School of Film, Dance and Theatre, within the Herberger Institute, and director of the MFA and PhD programs in Theatre for Youth. “Future generations will benefit from this love and care. We would not be where we are today without Kathy, and her legacy will ensure the continued health of our field and our historical contexts.” 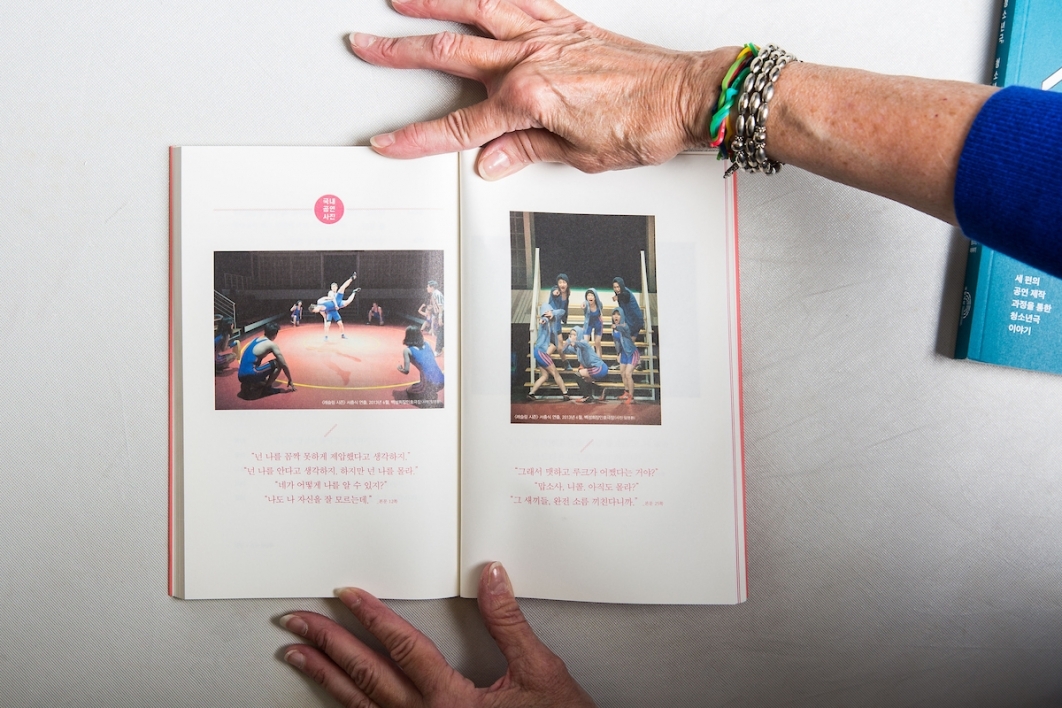 Krzys holds open a playbook of a Korean translation of a very famous American play called "The Wrestling Season," which focuses on sexual identity and bullying. 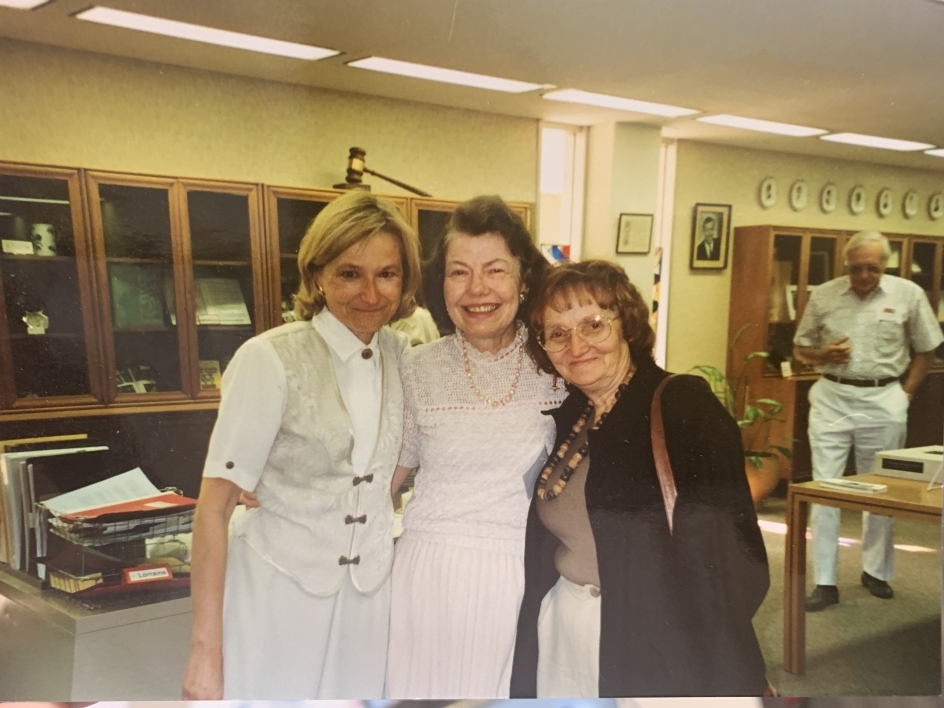 From left to right: Krzys, Marilyn Wurzburger and Lin Wright pose for a portrait on the day in 1994 that Krzys was offered a continuing appointment, full-time position as the archivist for the Child Drama Collection. 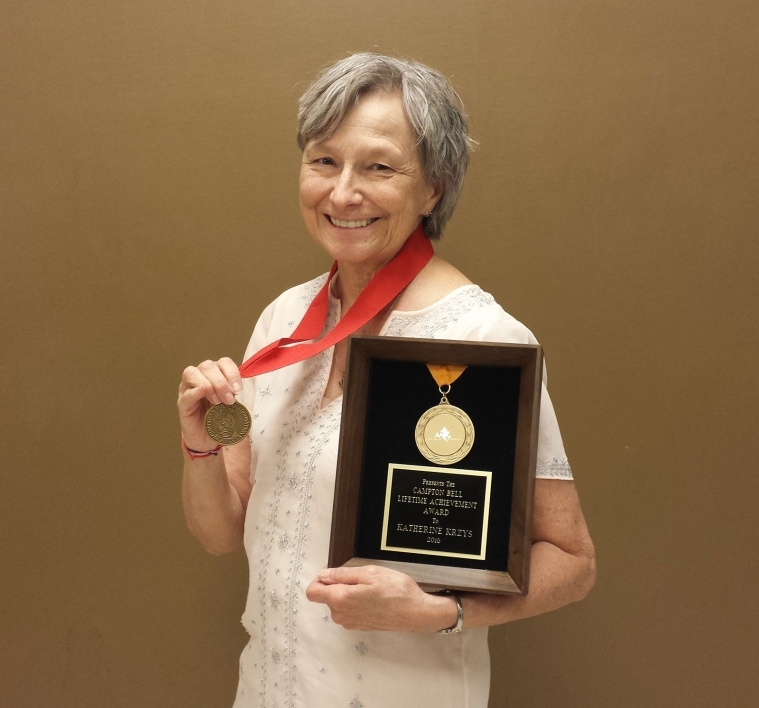 In 2016, Krzys received the highest awards that can be achieved in the field of theater for youth: the Children’s Theatre Foundation of America’s Corey Medallion and the Campton Bell Lifetime Achievement Award. Previous medallion award recipients include television’s “Mr. Rogers Neighborhood,” the National Endowment for the Arts, and Charles Schulz of “Peanuts” fame. 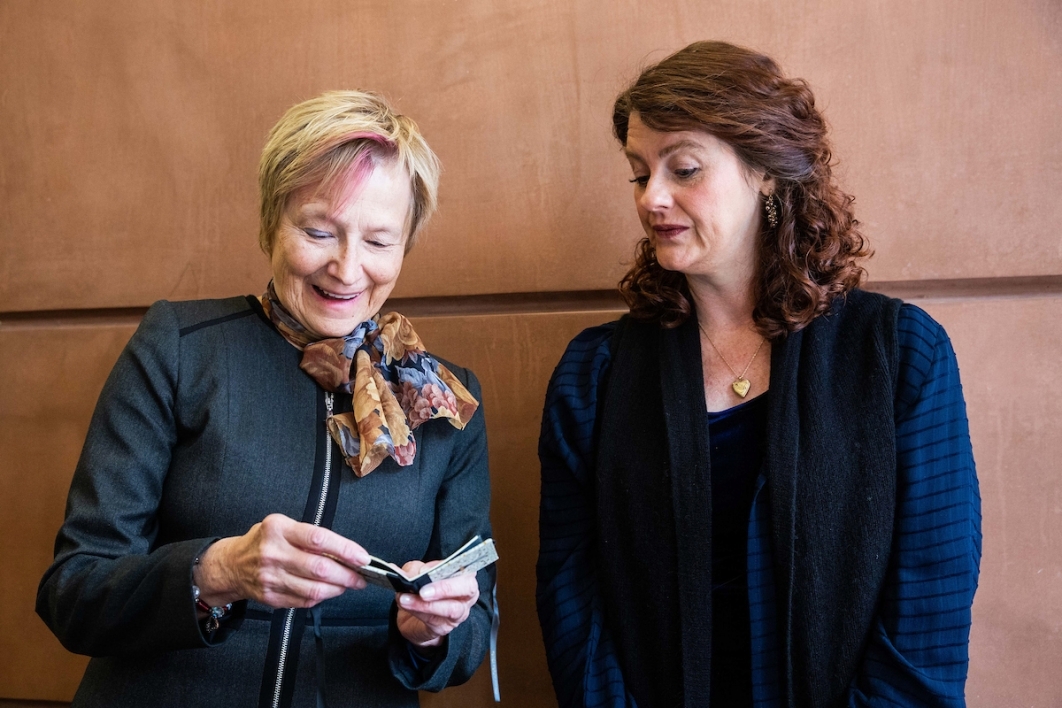 ASU alumna Kelly Houle (right) and Krzys chat about Houle's work in miniature artist books — now part of the ASU Library’s Rare Books and Manuscripts, of which Krzys led in recent years. The donation was facilitated through the Department of English Lamberts Memorial Rare Books Fund.

Dontá McGilvery said that Krzys was the first person he met after being accepted into the Theatre for Youth PhD program. The meeting led him to begin exploring the archive looking for plays written by African American playwrights.

When he began teaching an African American theater class in 2018, he enlisted the help of Krzys, who spent hours searching for plays and identifying playwrights.

“She was searching as if this were her project,” said McGilvery, winner of the 2019 ASU MLK Jr. Student Servant-Leadership Award and a 2018-19 ASU Spirt of Service Scholar. “For my class, I needed a play that was the first recorded play by an African American written around 1820, and she located it. I had mentioned it to her but didn’t realize that she had been searching for it. There was only one copy, and she said, ‘I found it. Do you think we should get it?’ She purchased it and now we have it at ASU.”

Beyond her energy and passion, McGilvery says what sets Krzys apart is her desire to learn and grow.

When presented with criticism in a seminar class about the lack of diversity in the educational theater field, Krzys took note and the very next day came prepared with materials reflecting those voices that had been missing from the conversation, McGilvery said.

“Kathy said to me, ‘It’s good that you’re asking about these plays. You’re requiring us to get more information. We need these plays. We need to make sure they are here.’”

In 2017, Krzys was awarded the highest achievements in the field of theater for youth: the Children’s Theatre Foundation of America’s Corey Medallion and the Campton Bell Lifetime Achievement Award from the American Alliance for Theatre and Education.

Previous winners include television’s “Mr. Rogers Neighborhood,” the National Endowment for the Arts and Charles Schulz of “Peanuts” fame.

“Kathy Krzys has been one of our stars for a long time,” University Librarian Jim O’Donnell said. “Her special work with the Child Drama Collection has won national recognition, and her leadership in seeing our rare books and special collections through a series of challenging transitions has earned her the admiration and gratitude of all who work with her.”

Symposium presenters will include Woodson, Wright, Doyle, Wurzburger, Bedard, Suzan Zeder and other scholars, students and practitioners in the field, including Krzys herself.

“I’m a great believer in fate,” Krzys said. “Fate brought me to ASU, brought me to the library to study Sarah Spencer, and kept me here in Arizona.”

While Krzys plans to leave Tempe and move to Gainesville, Florida, to be closer to her daughter and grandchild, she says fate is throwing things in her face right now, alluding to the next chapter of her career — a potential book project and a possible partnership initiative to make the history of theater for youth more digitally accessible.

Top photo: Kathy Krzys leads a seminar session for graduate students on the history of theater for youth. Photo by Deanna Dent/ASU Now