Love and law: Alumnus reflects on how a degree in the humanities led to a place on the judicial bench

For Superior Court Judge Michael Convey, leaving his native Chicago to attend college at Arizona State University started off as a chance to see a new part of the country. It turned out to be the place he found both the passion for a law career he’s spent his life building and the person he’s spending it with.

Today, Convey is one of over 500 judges with the Los Angeles County Superior Court — a governor-appointed position he’s held since 2010. With over 35 courthouses in operation across the county, it is the largest single unified trial court in the U.S. He was a court commissioner for nearly a decade before that, and spent his previous career as a litigation and trial attorney and as a volunteer temporary judge. 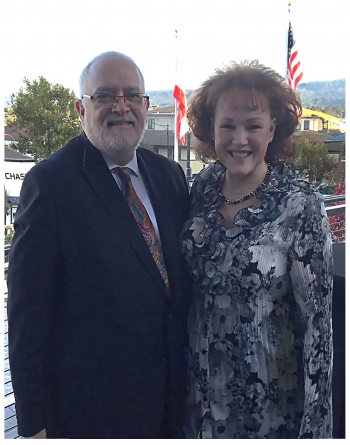 Judge Michael Convey and Carol Kiernan met during their undergraduate studies in The College of Liberal Arts and Sciences. Download Full Image

Being a judge is a role he now sees as his life’s calling. But the road to get there wasn’t straightforward.

Convey graduated from The College of Liberal Arts and Sciences with a bachelor’s degree in English in 1982. He met his wife, Carol Kiernan, during a training course for resident assistants on staff with ASU’s residence halls.

“We ended up in the same resident assistant class on student leadership and counseling in 1979 and by 1980 we were dating,” Convey said. “Carol bore a striking resemblance to the singer Melissa Manchester, and I remember she had — and still has — this incredible joy for life that not many others have.”

That would not be the only course they had together. Kiernan was a theater enthusiast pursuing a bachelor’s degree in humanities from The College, and their tracks frequently crossed paths.

“We used to love to take our Shakespeare classes together,” Kiernan said. “Mike liked to write the papers and dissect the language and I liked to make the plays come alive.”

The pair would spend hours listening to plays on tape and reading along together in Hayden Library. But while Kiernan continued delving deeper into her passion for acting, Convey remembers feeling like he hadn’t yet experienced his “aha” moment. One finally arrived when he was pursuing a teaching degree and a friend suggested he look into political science.

Convey’s interest piqued when he enrolled in a constitutional law course. Studying one of the country’s oldest legal documents, he realized he’d found what he was looking for.

“That class was like a light bulb going off for me, and that light was law school,” he said. “Liberal arts gave me the opportunity to take those other courses that prepared me to study the law, from philosophy and political science to foreign language and history, all while I was continuing with my upper division English courses.”

With Kiernan’s encouragement, Convey returned to The College to complete his courses on time and the two graduated together in 1982 — Convey with a degree in English, Kiernan with dual degrees in humanities and theater. That same year, they decided to pursue their respective career goals together. They moved to Chicago and each entered programs at DePaul University. Convey went to law school and Kiernan pursued a master's degree in theater.

The couple returned to Phoenix after graduation. Convey began working as a trial and litigation attorney while Kiernan worked with local theater groups and on small television projects. A few years in, she wanted to take her acting career to the next level by moving to Los Angeles.

“I grew up in Phoenix with seven siblings, so I loved being back home,” Kiernan said. “But I realized I needed to be in Los Angeles in order to pursue the next phase of my career, so Mike agreed to take a second state bar exam so he could practice in California.”

Kiernan continued to grow her career, landing appearances in popular shows like "ER" and "The West Wing." Meanwhile, Convey began exploring his options at the local bar association, completing community service and serving as a volunteer temporary judge for small claims and traffic courts.

“Similar to when I did this at ASU, I was looking for the next thing,” he said. “Serving as a temporary judge made me realize that was what I wanted to do all the time; to me, it combined everything from reading and writing to interacting with people and being of service.”

Convey began pursuing judicial roles more frequently. By 2002, a majority vote made by the judges of Los Angeles County appointed him a court commissioner presiding in a family law courtroom. Eight years later, he was appointed as a Los Angeles County Superior Court judge by then-governor of California Arnold Schwarzenegger.

It’s been almost a decade since then, and Convey continues to preside predominantly over family law cases. He says the role is in many ways an extension of the service spirit that originally drew him to teaching.

“To me, first and foremost, family law is about helping people get through a very difficult time in their lives by listening and helping to find solutions,” he said. “Other cases I deal with address domestic violence or parents who have challenges raising their children in the aftermath of a break in their relationship; so I see my roles as helping to protect the public and to help parents make decisions that serve the best interests of children.”

Convey says the humanities track he chose was the vehicle that led him to his judicial calling. But as a student at ASU, he said he would have never imagined this would be the career he’d end up in. That’s why when it comes to choosing an academic path, he encourages students to keep an open mind.

“A lot of people ask whether I always planned on becoming a judge, and I realize that I could have stayed in Chicago and become a firefighter like my dad, but my parents gave me the confidence to find my own opportunities,” he said. “I recognize all the time that my liberal arts degree is what helped me get here — my advice to students is to try many things and don’t be afraid of changing your mind, because exploring opportunities is why you go to school.”

One of the foremost Swedish universities recognized Arizona State University Graduate College Dean Alfredo J. Artiles with an honorary doctoral degree. At a ceremony on Friday, Oct. 18, the University of Gothenburg presented Artiles with an honorary degree of Doctor of Philosophy for his scholarship on disability policy and educational equity.“For the last 27 years, (Artiles) has produce... At a ceremony on Friday, the University of Gothenburg presented Alfredo J. Artiles with an honorary degree of Doctor of Philosophy for his scholarship on disability policy and educational equity. Download Full Image

Artiles' long list of accomplishments include being elected to the National Academy of Education, being named fellow of the American Educational Research Association, serving on the White House Commission on Educational Excellence for Hispanics from 2011 to 2017, serving as vice president of the American Educational Research Association from 2009 to 2011 and editing the Teachers College Press book series “Disability, Culture, and Equity” since 2008.

Along with Artiles’ academic contributions, Ingerman also noted his “dedication to supporting other researchers” as part of an international consortium of equity research in special education. The consortium focuses mainly on understanding the “Complexities of Inclusive Education from a Comparative Perspective: How Cultural Histories Shape the Ways That Schools Respond to Multiple Forms of Diversity.”

“Professor Artiles has been very useful in sharpening our thoughts in that respect,” Ingerman said. “He has sustained productive collaborative efforts with some of us; sharing his scholarship, inviting us to join publication and research projects and participating in conferences.”

“I am truly humbled to be selected for this honor by the University of Gothenburg," Artiles said. “It has truly been a pleasure to work with colleagues at Gothenburg and other universities around the world to add to our understanding of educational equity and building inclusive educational systems."

The honorary degree, Ingerman said, was a way to express the university’s interest in continued collaboration. Artiles was invited to attend Gothenburg’s annual ceremony of the conferment of doctoral degrees as part of the honor. The event was held at the Swedish Exhibition Centre’s Congress Hall in Gothenburg, the country’s second-largest city.