Arizona State University psychology graduate student Victoria Woner is traveling to Chicago this week as a winner of the prestigious Society for Neuroscience Trainee Professional Development Award. This recognition establishes her as one of the top graduate researchers in neuroscience worldwide and will help propel her career forward.

Woner was selected based on her research in Heather Bimonte-Nelson’s Behavioral Neuroscience of Memory and Aging Lab that focuses on memory during the transition to menopause. She will present her research in a featured session at the conference and will be mentored for a year by established neuroscientists associated with SfN. The award also pays for Woner’s registration to attend SfN’s annual meeting Oct. 19–23, which routinely draws in excess of 30,000 neuroscientists from 70 countries, and includes a $1,000 stipend for her travel costs. 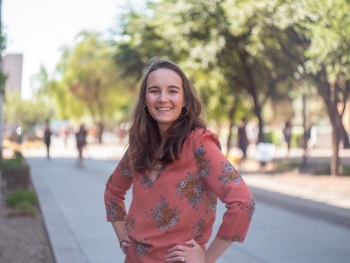 Woner’s doctoral research looks at progestins, which are a synthetic version of the hormone progesterone, a naturally occurring female sex hormone. Progestins can be prescribed alone to treat endometriosis and irregular bleeding, and they are also commonly given to women in conjunction with an estrogen as a form of hormone therapy during the transition to menopause. Women who have an intact uterus need the progestin component of hormone therapy to oppose the risk of uterus hyperstimulation from estrogen, which can induce endometrial cancer. Some research suggests that hormone therapy can alleviate symptoms experienced in menopause, like hot flashes, sleep disturbances and mood changes, but its effects on memory are less well-understood.

Woner hopes that her contributions to the basic science models surrounding hormone therapy can help with finding a more ideal solution for women.

“I am particularly interested in finding a unique hormone therapy combination that could be taken at different steps during the transition to menopause and that could yield optimal cognitive outcomes while also having a beneficial systems-wide effect,” she said.

“I was thrilled to nominate my doctoral student Victoria for this award," said Bimonte-Nelson, who was recently named the AZ Biosciences Educator of the Year as a result of a nomination from Woner and several of Bimonte-Nelson’s other students. "It was a perfect fit, as she is already an exemplary scientist even at her junior level. Victoria is a pleasure to mentor. She is brilliant and insightful, has an excellent positive and constructive attitude, exudes kindness and jumps right in to teach anything she can to the undergraduate and high school students in the laboratory. She is a natural communicator, and this award is going to benefit her, and the students she is working with, immensely.”

Woner began her ASU journey as an undergraduate. She double majored in chemistry and psychology. She said she was unsure about what she wanted to do after college until she joined Bimonte-Nelson’s lab as an undergraduate and felt an instant connection to her mentor and the research. Woner said she enjoys working in Bimonte-Nelson’s lab because the work merges her passions of neuroscience and chemistry with women’s health. She also enjoys helping run the ASU Brain Fair for Children and coordinating neuroscience outreach events with the lab to get the next generation excited about college and science.

Related: Isabel Strouse wins Barrett Award for Research on whether an IUD has an effect on learning and memory

SAN DIEGO – After missing nearly all of 2019 due to injury, Sasa Klanecek made her fall debut at the ITA Southwest Regional Championships Thursday and joined senior Savannah Slaysman in punching a ticket to the round of 32 in the tournament. ... SAN DIEGO – After missing nearly all of 2019 due to injury, Sasa Klanecek made her fall debut at the ITA Southwest Regional Championships Thursday and joined senior Savannah Slaysman in punching a ticket to the round of 32 in the tournament.