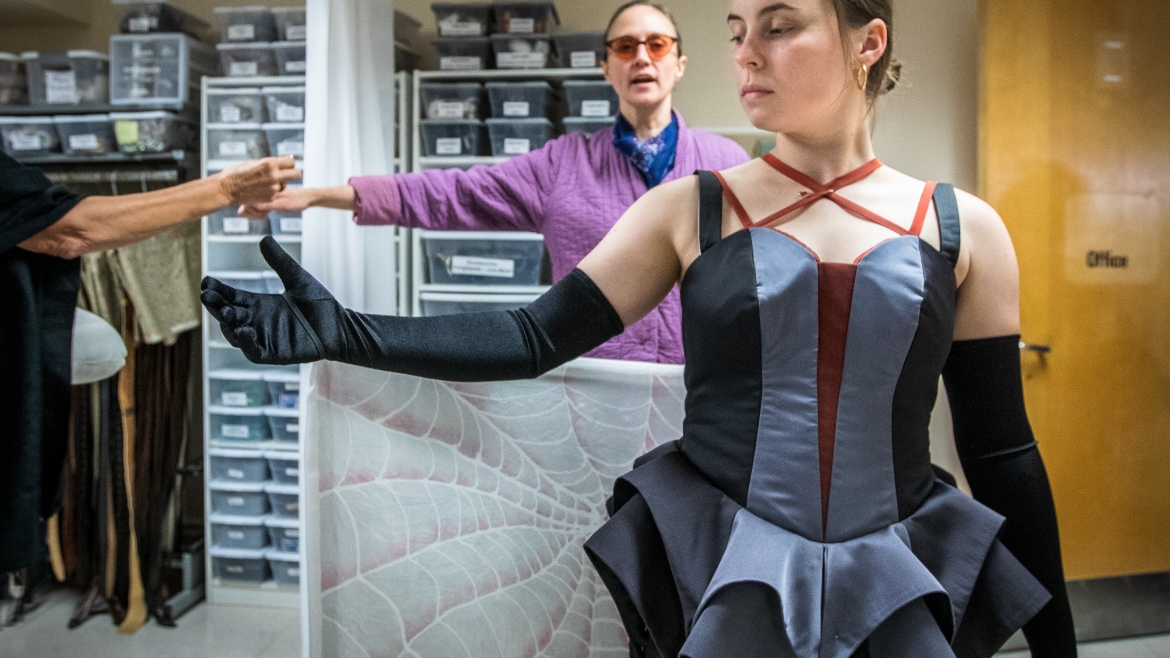 Halloween do-it-yourselfers can get tips from the pros

The “Kiss of the Spider Woman” is a play about politics and fantasy, and the Arizona State University student production that will debut on Friday allowed for a lot of creativity in the costuming.

The female dancers in the show are imaginary — conjured in the minds of the two male characters who are in prison.

The students started working with the director, Guillermo Reyes, professor of theater, back in the spring semester to create the otherworldly vision of the costumes, according to Sarah Moench, clinical assistant professor of costume technology.

“This show, with the theatricality of the dancers’ costumes in particular, is a great way to illustrate how we go about making costumes and to showcase what our students are doing,” she said.

“We get a lot of interest in this around Halloween.”

Here are some ways to come up with a costume like the pros: 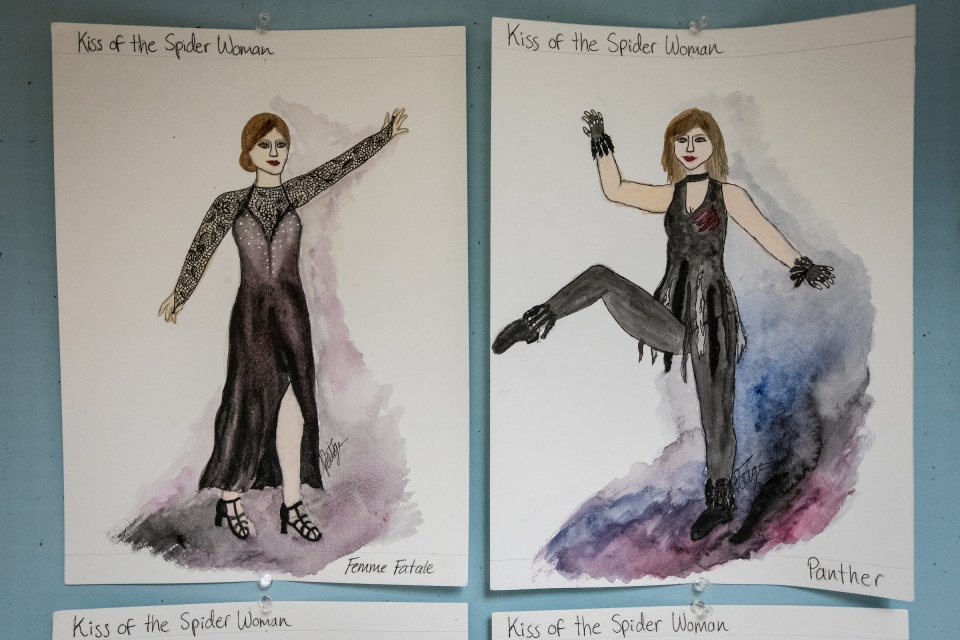 Costume sketches were created by Paige Lockwood, the costume designer, who is a senior majoring in theater production and design with a minor in studio art. Photo by Charlie Leight/ASU Now

“Some people start planning their Halloween costume the day after Halloween for the next year,” Moench said. “For us, the theater production schedule starts 23 weeks out from the opening.”

For “Kiss of the Spider Woman,” students were cast in the roles and Lockwood’s costume research and preliminary sketches were done by the end of the spring semester. Her final designs were due shortly after fall semester started.

“About 13 weeks out is when I come to the first meeting and talk about the production side,” Moench said. 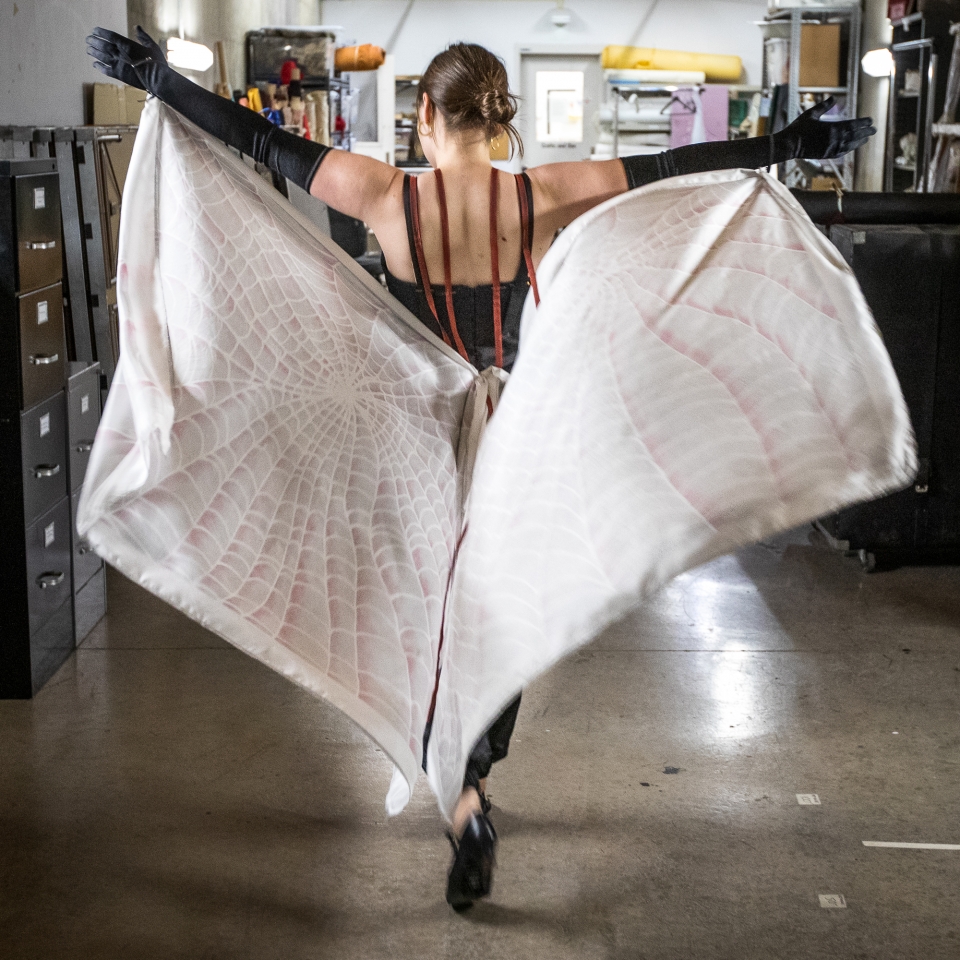 The silk shawl worn by Ausette Anderies in "Kiss of the Spider Woman" was hand painted with silk dye for a "spidery" effect. Photo by Charlie Leight/ASU Now

Lockwood started the costume design process by collaborating with the director and then researching the era.

The play is set in a prison in 1970s Argentina, a politically turbulent time. The 1985 movie starred William Hurt, Raul Julia and Sonia Braga, although Lockwood did not see it.

“I try not to watch movie interpretations because I don’t want to be influenced by other designers’ choices,” she said.

In the play, the character Molina passes the time in prison by discussing a movie from the 1940s, so Lockwood took inspiration from that for the “femme fatale” character’s costume.

“I looked at images of 1940s noir films and those powerful female characters with the long silky black dresses that are slender and have movement and are sensual,” she said.

“I wanted to get that sleek look and I also got inspiration from Argentinian tango because that started in Buenos Aires in the 1940s. That’s why I have the slit up her leg.”

Lockwood emphasized the “femme fatale’s” arms with black lace to get that sensuality and darkness of the character.

“For that, I had a lot of creative freedom because there isn’t really a time period or exact look, because she’s in his imagination and it’s surrealism.

“So I looked at surrealistic artwork from that time, I found paintings of women who looked dangerous and mysterious and I was inspired by that.” 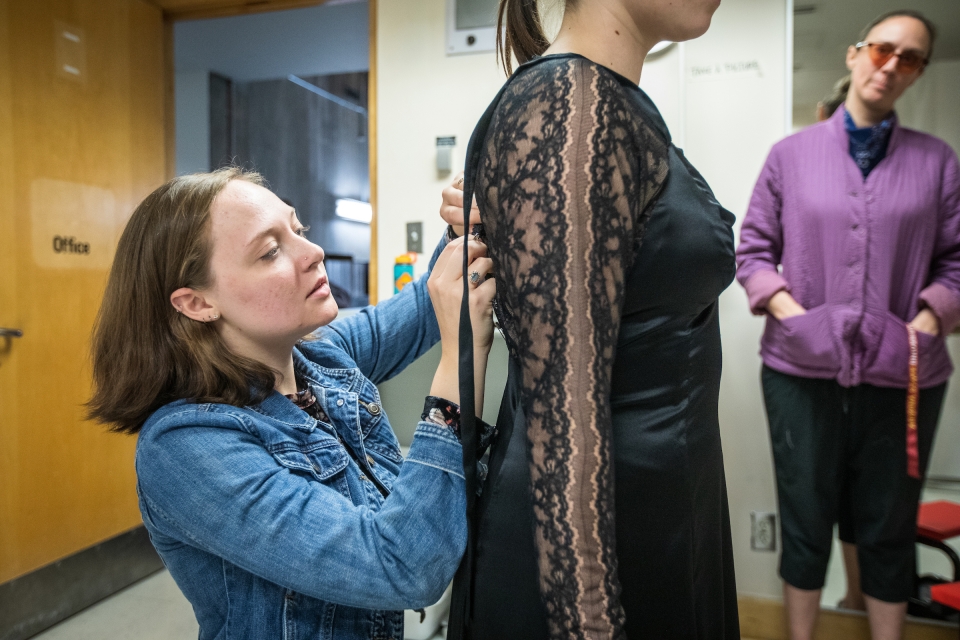 Murphy created the “femme fatale” costume out of silk charmeuse, which stretches, so it’s comfortable for the dancer.

But the fabric is expensive. So first, the drapers make the costume out of inexpensive fabric to perfect the fit and tweak the design. For example, the “femme fatale” costume was modified to have princess seaming in the bodice, which works better for a dancer.

“We did the mockup so that’s always comforting, and so you know how much fabric it will take and any roadblocks you might face,” said Murphy, who learned to sew in high school and refined her skills at ASU.

For the shawl that goes with the “Spider Woman” costume, Moench and Lockwood created the spidery effect by hand-painting the white silk with silk dye. Then, they sewed dress weights to the corners to enhance the graceful motion as the actor walked with the shawl flowing behind her. Do-it-yourselfers can add coins to a hem or edge to create the same finished effect. 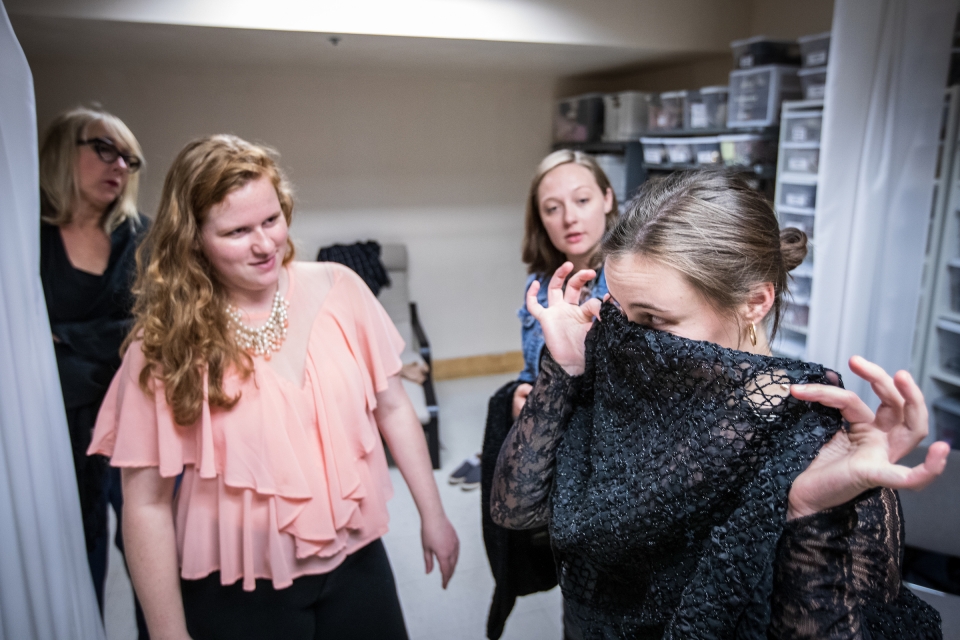 “People making their Halloween costume have a budget and we have one too,” Moench said.

The students had $750 to spend on all the costumes, including shoes, plus hair and makeup. Some of the items, such as the black lace for the “femme fatale” costume, were in the costume stock. The silk was expensive but actually cost less to buy in bulk, so there’s plenty left over for another costume in the future.

“We always set aside 10% of that budget as a contingency, so if we find out we need another pair of shoes or we need to add a hat or some jewelry, there’s a little bit of money set aside,” she said.

“So figure out what kinds of pieces you need, set your budget and set 10% aside because inevitably, you’ll want something else at the end and you’ll end up at the store trying to find black fishnets and you’ll have to spend a bunch more because everybody has bought them all.”

Open up your research (and the world will thank you)

Eliminating barriers to learning is at the heart of the ASU Charter, and nowhere else is this more celebrated than in the global movement for open access.  Open access refers to peer-reviewed research that is made widely accessible to the public at no cost, along with encouraging its use and reuse through expanded copyright permissions; thus, the open access movement aims to transf...

Open up your research (and the world will thank you)

Eliminating barriers to learning is at the heart of the ASU Charter, and nowhere else is this more celebrated than in the global movement for open access.

Open access refers to peer-reviewed research that is made widely accessible to the public at no cost, along with encouraging its use and reuse through expanded copyright permissions; thus, the open access movement aims to transform the model of academic publishing by eliminating restrictions that many argue impede innovation. 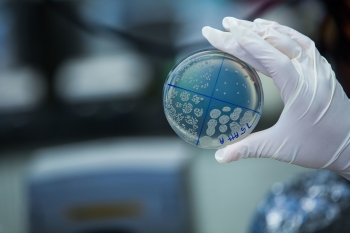 “Putting research behind a paywall means that a large portion of the world cannot access it,” said Anali Perry, a scholarly communications librarian at ASU who will be making the case for academic openness during Open Access Week, Oct. 21-27.

As part of Open Access Week, scholars and researchers at Arizona State University are encouraged to learn more about ASU’s Open Access Policy, which was established in 2017 as a way of making ASU scholarship more widely available and with fewer restrictions.

Open Access Week is also an opportunity to celebrate open education and the resources and tools that support it.

In 2013, Maricopa County Community Colleges began a strategic, districtwide initiative to cut down the cost of a college education for Arizona students. By encouraging and providing support for instructors to locate, adopt and create open and no-cost educational materials and textbooks, the Maricopa Millions Open Educational Resources Project was born, saving students more than $11 million in its first five years.

This semester, ASU instructors and faculty are encouraged to participate in a series of workshops on how to integrate open education resources into their courses, jointly offered by ASU Library and Maricopa Millions.

“Today, there are so many ways to make learning and research accessible and inclusive, and we want to provide instructors the tools and resources they need to help break down these cost and access barriers to education,” said Perry, who is among several ASU librarians, faculty and staff who will be presenting at the international Open Education Conference in Glendale, Oct. 30-Nov. 1.

In addition to the Open Education Conference, several Arizona institutions, including ASU, are sponsoring a free, full day workshop on open education resources and practices on Oct. 29. OERizona encourages all educators, regardless of experience, to attend, build relationships and gain expertise in open education.