Understanding the magic of dogs

A recent study published in “Circulation,” the journal of the American Heart Association, concludes that having a dog is associated with a lower risk of death in humans, especially in humans who have cardiovascular ailments. Other studies show that people with dogs exercise more, stress out less and have better self-esteem. What’s more, dogs offer a special kind of companionship to humans — love.

In fact, Arizona State University Professor Clive Wynne would say that a dog can steal your heart, something dogs actually have evolved to do.

Recently, ASU Now sat down with Wynne to discuss his latest book, “Dog is Love: Why and How Your Dog Loves You,” and his fascination with dogs and their wild relatives. Wynne is the director of the ASU Canine Science Collaboratory and a professor of psychology at ASU. His book tells us how his dog Xephos showed him what makes dogs so special, why dogs’ capacity to love makes them such suitable companions for humans and why we love them back.

Question: What motivated you to write “Dog is Love”?

Answer: For a very, very long time, it’s been my ambition to write a book that would appeal to a wide audience. Part of the inspiration is quite deep. My late father left school when he was 13, and he was always asking me to explain things in terms he might have a hope of understanding. So, there’s always been a voice in my head trying to explain things in really basic terms. It’s very rewarding to be able to speak and write in a way that a lot of people can understand. It’s part of being a university professor, I think. When I came to the view that the uniqueness of dogs lies in their capacity to form strong emotional connections, I had a strong sense that this was something people might be interested in.

Q: Do you have a favorite chapter in the book?

A: I love all my children equally (laughs). I don’t know. Do I have a favorite chapter? I think it’s important that the final chapter is “Dogs Deserve Better.” I think people who worry about dogs, like people who worry about anything, want scientists to step forward, and not just provide a deeper understanding of things, but provide guidance about how to live in the here and now. In the final chapter, I do come out and say how we should go about living with dogs.

Q: What about your dog Xephos?

A: She has her own chapter in the book!

Q: What’s her chapter about?

A: Her chapter is about how my family and I hadn’t had a dog for some time, and there came a point where we were ready to get a dog. As it happens, this dog came into my life just at the point where I felt that other people’s claims as to what makes dogs unique had ceased to work for me. I felt I had refuted them. Yet, I hadn’t come up with what I could propose as an alternative to what makes dogs unique. I knew there was something going on with dogs. They’re not like other species. But I could not articulate what it was. And this dog came into our life. She’s not smart. She’s not a pedigree. She’s not what people call beautiful, but I think she’s beautiful. She’s just a cute mutt. I call her the book’s spirit animal because she was trying to communicate something to me. Finally, the penny drops. She’s so affectionate — and this is what makes dogs special, what makes dogs unique. It’s this exaggerated, ebullient desire to form strong connections, and she taught me that.

Q: Tell me more about that.

A: When I come home, she’s crazy happy to see me. She uses her whole body to express her enthusiasm for being back with me. And when we are home together, she’s always nearby. She’ll follow me around, watch TV with me, lie down in my office and keep an eye on things while I’m working, just these everyday miracles. We have this ability to communicate emotionally even though we’re not closely related species.

Q: I have to ask, what does it mean when a dog licks your face, or kisses you, as some would say?

Q: You haven’t always studied dogs. What did you study before them?

A: I was always an animal psychologist, and like other animal psychologists I studied pigeons and rats and, later, marsupials while I was in Australia. The marsupials were fun. I came to studying dogs because when I came to the United States in 2002, I couldn’t continue to study marsupials, and I didn’t really want to go back to studying pigeons. I realized I wasn’t just interested in just animal minds. I was also interested in the human-animal relationship. I’m embarrassed to say it took me a couple of years to figure this out, but if you want to study human-animal relationships, there isn’t another animal that humans have had a more intense relationship with than dogs. I’ve been lucky. Since I turned to dogs, it’s been magic.

What: An evening with three leading experts on the powerful bond between people and their pooches.

What: A symposium of leading experts in academia in the field of canine behavior.

Ever since its days as the imperial Aztec capital of Tenochtitlán, where efficient canals reminded invading Spaniards of Venice, Mexico City has had a complicated relationship with water. These days, the city’s underlying but dwindling water supply is literally sinking the city, and increased demand for water is intensifying issues of inequality and corruption. But the quest for water is also t...

Ever since its days as the imperial Aztec capital of Tenochtitlán, where efficient canals reminded invading Spaniards of Venice, Mexico City has had a complicated relationship with water. These days, the city’s underlying but dwindling water supply is literally sinking the city, and increased demand for water is intensifying issues of inequality and corruption. But the quest for water is also triggering civic and technological innovation, as well as a desire to collaborate with other parched regions.

These were some of the themes discussed at Arizona State University’s latest Convergence Lab event in Mexico City last week, “Mexico City Dehydrated?”, held at the Horizontal ideas journalism space. 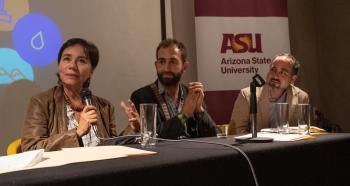 In conversation with Horizontal Director Guillermo Osorno, Mexico City’s Secretary of the Environment Marina Robles said the metropolitan area’s 21 million people need to relearn “the relationship between nature and society,” and stop thinking that nature and the environment are foreign concepts, far removed from urban areas. Indeed, Robles added that over 50% of Mexico City is conservation land, providing the city with essential environmental services such as CO2 capture and the recharging of the aquifer that accounts for 70% of the city’s water. Similar to Phoenix’s Tres Rios Wetlands, Mexico City is also constructing artificial wetlands to support water treatment and groundwater recharge.

Of the “mountain of challenges” to Mexico City’s water security, not the least of which are leaky pipes that waste an estimated third of the city’s water supply, Robles argues that the most significant one may be people’s mindsets. While most people acknowledge the water crisis and think that action must be taken, they are hesitant to make personal changes when it impacts their own comfort.

ASU and the Universidad Nacional Autónoma de México, Mexico’s prestigious national university, have partnered up to create a modeling tool called MEGADAPT to help scientists and policymakers like Robles assess the scope of Mexico City’s water crisis, and how changes in policy and behavior affect it and shift vulnerabilities. Luis Bojórquez, UNAM’s lead researcher for MEGADAPT, told Robles and the audience that graduate sustainability studies at UNAM had been started over a decade ago as a result of interactions with ASU, and he pointed to projects like MEGADAPT and the ASU-UNAM Binational Laboratory on Climate Change Vulnerability as examples of pragmatic and essential cross-border research collaborations to confront shared North American challenges.

He and Enrique Vivoni, ASU professor and associate dean of the Graduate College, agreed that while scientists are fairly certain that the temperatures will continue rising, it isn’t immediately clear what that means for overall precipitation trends in cities like Mexico City, though we might expect more flooding from severe storms. Hence the need for cities to become far more resilient, to confront both severe weather fluctuations and uncertainty.

In addition to his own involvement with the MEGADAPT project, Vivoni is also focused on regional cooperation closer to home, between Arizona and the neighboring border state of Sonora to address shared issues of water conservation and sustainable economic development. Next spring students of his will respond to sustainability challenges posed by water and natural resource management agencies in northern Mexican communities from Ensenada, Mexicali, Hermosillo and Ciudad Juarez. Both he and Bojorquez stressed the need for more citizen engagement in meeting the environmental challenges our cities face; Vivoni went so far as to hold up his smartphone as a powerful technology in this effort, as citizens can be connected to scan, measure and map water quality and access.

One such civic enterprise in Mexico committed to preserving as much of the city’s rainfall as possible is Isla Urbana. Enrique Lomnitz, the group’s director, told the Convergence Lab audience that rainwater harvesting systems in Mexico City, where it rains regularly, can provide a family with water independence for 5 to 8 months out of the year. Since being founded in 2009, Isla Urbana has installed 15,000 catchment systems while reducing flooding, energy usage and pumping from aquifers. Isla Urbana has worked with ASU researchers to map potential rainwater harvesting locations and present them to Mexico City officials.

Referring to Mexico’s water challenges, Lomnitz said, “We are never going to solve this problem solely through government action,” particularly since conservation innovation will require risk-taking and experimentation. Robles agreed, though added that her government had taken significant actions to encourage conservation, such as enforcing a stricter water-usage code on new developments. Bojorquez focused on the societal implications, stressing that adaptation to climate change will have to occur in every sector, and will be an expensive process.

Depending on their individual perspectives, the Convergence Lab speakers emphasized the role of academic researchers, the private sector, and government agencies in leading efforts to ensure long-term water security in the face of mounting demand and adverse climate change. But as the evening wore on, it became increasingly clear that they all agreed on the need for greater cross-border collaboration to meet the shared challenges ahead.