Over the previous five days, her traditional knowledge had been put to the test with a series of rigorous competitions focused on Navajo language, culture and practices. She’d spent months preparing, making regular trips back to her family home in the Navajo Nation’s Kayenta, Arizona, to hone her skills under the watchful eye of her grandmother. To Parrish, participating in the pageant was about more than a title. It was about upholding a traditional way of life and giving back to a community she’d spent time away from while at ASU. 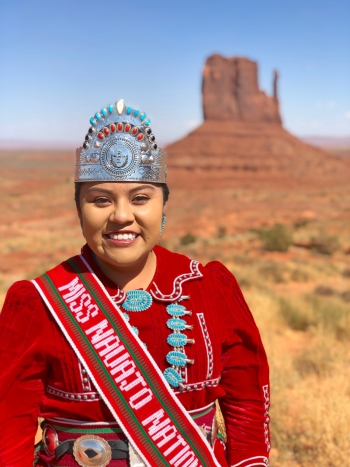 Shaandiin Parrish graduated with a bachelor's degree in political science and a minor in educational studies in 2018. This September, she became Miss Navajo Nation 2019. Download Full Image

“It was such an honor, but also very overwhelming,” she said. “This is a title that means so much to our people — I think in that moment I felt all the responsibility of it, and the crown was suddenly very heavy.”

Parrish is no stranger to the pageant world. She’s been competing since she was young and has already held Miss Indian ASU and Miss Indian Arizona titles. But in the mosaic of pageants across the U.S., Parrish said the Miss Navajo Nation title is unique.

Winners spend a year visiting over 27,000 square miles of tribal land. Because the Office of Miss Navajo Nation is a branch of the tribal government, the titleholder also serves as a goodwill ambassador, promoting community health, economic development and other initiatives.

“To become Miss Navajo, you must butcher an entire sheep in an hour, all in the traditional way, cook traditional dishes and complete interviews in both Navajo and English,” she said. “As the titleholder, you are responsible for visiting communities in our tribal lands in New Mexico, Colorado and Utah, making sure people feel like their concerns are being heard and they matter.”

Parrish’s run for Miss Navajo Nation is the latest milestone in what she says is a lifelong commitment to public service that she began cultivating at The College of Liberal Arts and Sciences. She graduated with a bachelor’s degree in political science from the School of Politics and Global Studies and a minor in educational studies from the Mary Lou Fulton Teachers College in 2018.

A passion for community service initially attracted Parrish to education. She came to ASU as a Gates Millennium Scholar with plans to teach in a bilingual Navajo-English classroom. But when she was unable to complete her teacher aid training with Navajo-speaking students in her final year, she began rethinking her life’s path, and her major.

A call to a new kind of service came to her at the 2015 Navajo Nation Fair, watching the then-Miss Navajo Nation pass on her title.

“She delivered her entire farewell speech in Navajo and talked about how all her work in the role had been for the benefit of her people,” Parrish said. “To me, her humility was such a display of community and public service — I think that day I realized that maybe one day I could actually be Miss Navajo, too.”

The speech inspired Parrish to start engaging her community through public policy and government. Back at ASU, it marked the beginning of a new degree path in political science and a host of achievements over the next few years.

In the fall semester of 2015, she earned a CAP/Udall ScholarshipThe CAP/Udall Scholarship was created by the Central Arizona Project and the Udall Foundation that funds students who are interested in careers focused on the environment, American Indian health care, or tribal public policy, and who display leadership potential, academic achievement, and a record of public service. and transitioned into a political science major at The College. Outside the classroom, she worked as a page intern in the Arizona State Senate for three years before taking a position as a public information officer for Arizona State Treasurer Kimberly Yee. 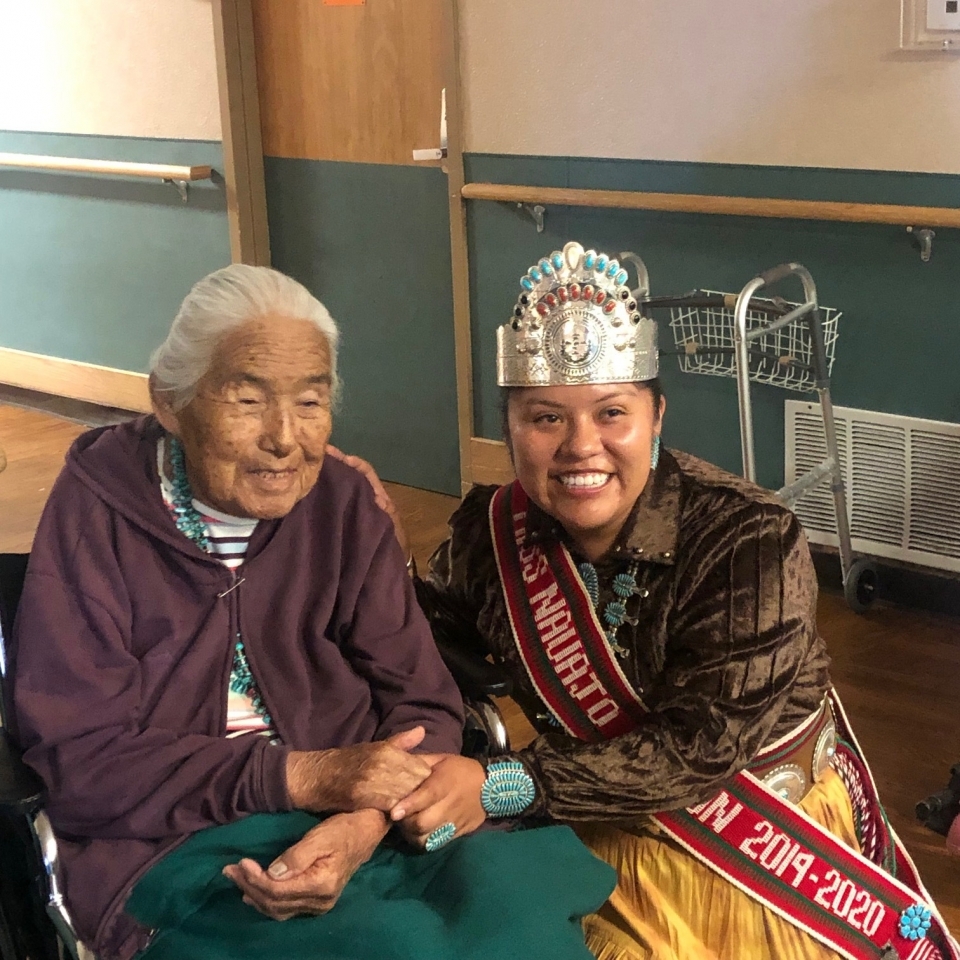 Parrish during a visit with Navajo elders at a community center on the Navajo Nation. Photo Courtesy of Shaandiin Parrish

Parrish said working for and meeting state representatives made her feel part of something larger than herself.

“At 24, I was the youngest Native American working at the Arizona State Senate on a daily basis, and it made me see how much impact one person can make,” she said. “The College played a huge role in my finding that internship and advancing professionally, especially during a hard transition changing majors.”

Still, living far away from the community she’d long planned on serving was taking its toll. The Miss Navajo Nation pageant was one way to bridge the gap. And standing on stage to accept the title last month, Parrish felt like she was entering a new phase of her journey that was bringing her closer to home. Now living in the Navajo Nation’s capital Window Rock and having the opportunity to visit communities full time, Parrish said the role feels like a new phase that’s bringing her closer to home.

“People don’t realize that the Navajo Nation is kind of like its own country, and the Miss Navajo title has a huge influence on our people,” she said. “I’m coming to this position from a very different government setting, and I think one of the best parts is being able to serve my community directly, every day.”

Now, she aims to help a new generation of Native Americans develop their futures while holding onto their history.

“I’d like to go back to ASU for a master’s degree and eventually law school,” she said. “As the eldest female child in my family, I’m also responsible for maintaining our Navajo traditions — I think my biggest motivation now is making sure I do that for my siblings, while also being someone who they can look up to in the world.” Arizona State volleyball defeated Colorado in four sets (31-29, 25-22, 16-25, 25-18) for its first victory over the Buffaloes since 2016, led by the first double-double of the season from senior outside hitter Ivana Jeremic.