We’re quickly outpacing the abilities of the current generation of wireless communication technology, commonly known as 4G. Think about that moment you see 3G signal strength on your smartphone — you know you’re in for a slow tech experience. You may soon feel the same about 4G. And while next-generation 5G tech is only in the early stages of commercial implementation, it was nearly a decade in the making.

That’s why researchers in the Ira A. Fulton Schools of Engineering at ASU are already preparing for the implementation of 6G by 2030. 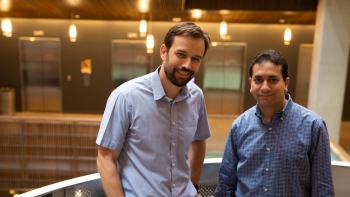 George Trichopoulos (left) and Ahmed Alkhateeb, assistant professors of electrical engineering in the Ira A. Fulton Schools of Engineering at Arizona State University, are leading the exploration of possibilities for 6G: the sixth generation of wireless communications technology. Photo by Monique Clement/ASU Download Full Image

Though we typically think of current 4G technology as a mobile communications network technology, future generations of wireless technology will go beyond what we think of as communications, say George Trichopoulos and Ahmed Alkhateeb, assistant professors of electrical engineering in the Fulton Schools.

By exploring the capabilities of wireless signals in the largely unused range above 100 gigahertz — or the proposed 6G spectrum — Trichopoulos, Alkhateeb and their research collaborators think they can “enable applications outside the classical definition of communications.”

The tiny signals at this range, referred to as millimeter waves, or mmWaves, can allow for imaging, mapping, localization and higher data-rate communications to connect multiple devices and even applications that haven’t yet been invented.

Trichopoulos and Alkhateeb are among the first to generate proofs of concept to demonstrate the possibility of 6G spectrum uses and features, which were outlined in an invited paper published in research journal IEEE Access.

Features of the 6G spectrum will make for some interesting applications and multiplicative effects. 6G’s higher bandwidth capabilities will allow for a massive number of internet of things connected devices to be connected on a single network. In the coming years, the number of available smart devices such as wearables, smart assistants, appliances and more is all but guaranteed to increase. Radar capabilities at 6G’s proposed frequencies have advantages over light detection and ranging, or LIDAR, which is often used for sensing in autonomous vehicles, due to the lessened impact of weather and ambient light on its abilities. 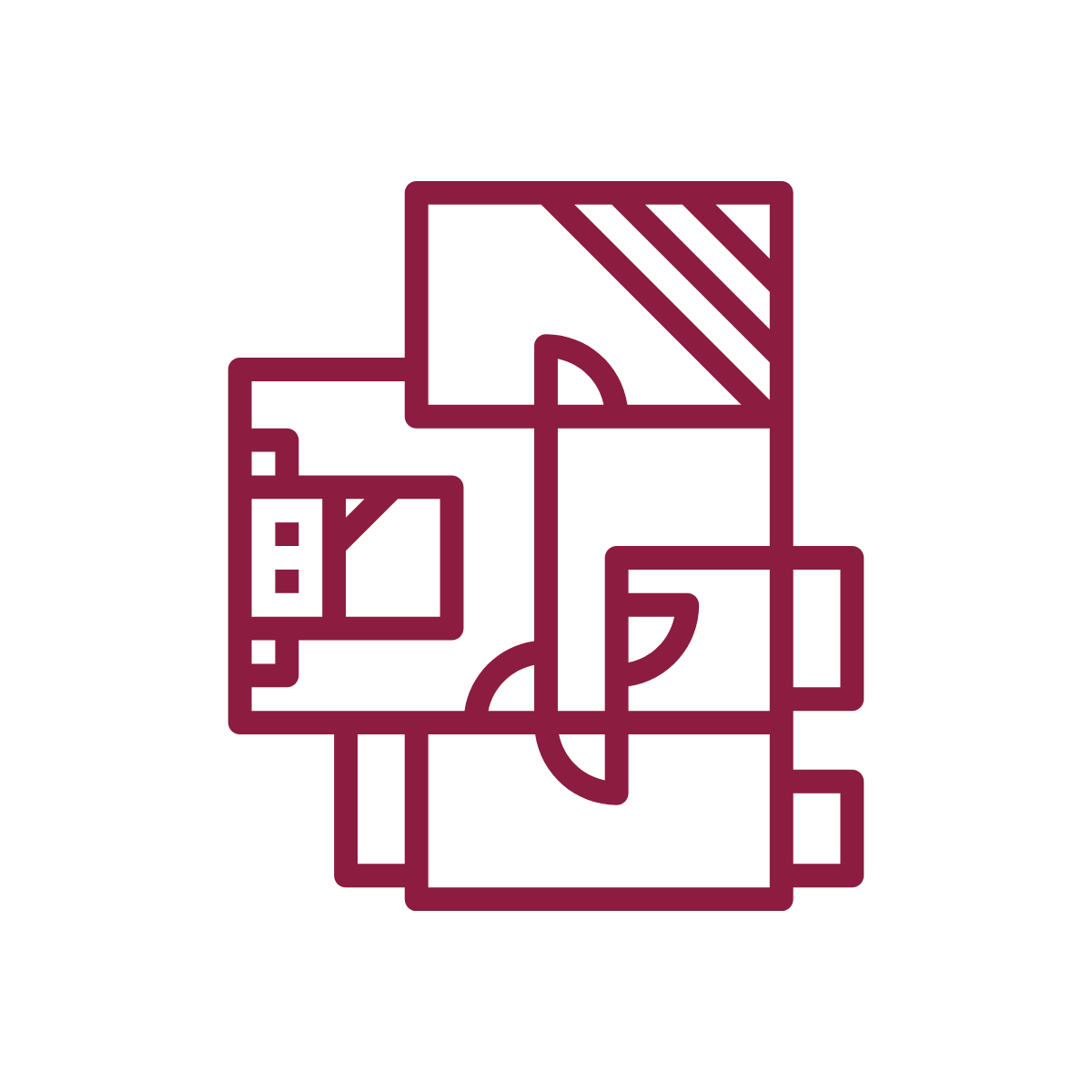 In an expansion beyond traditional communications capabilities, 6G also holds promise for mapping applications. Within a few milliseconds, a 6G device could use sensors to map an office, room or other complex environment. 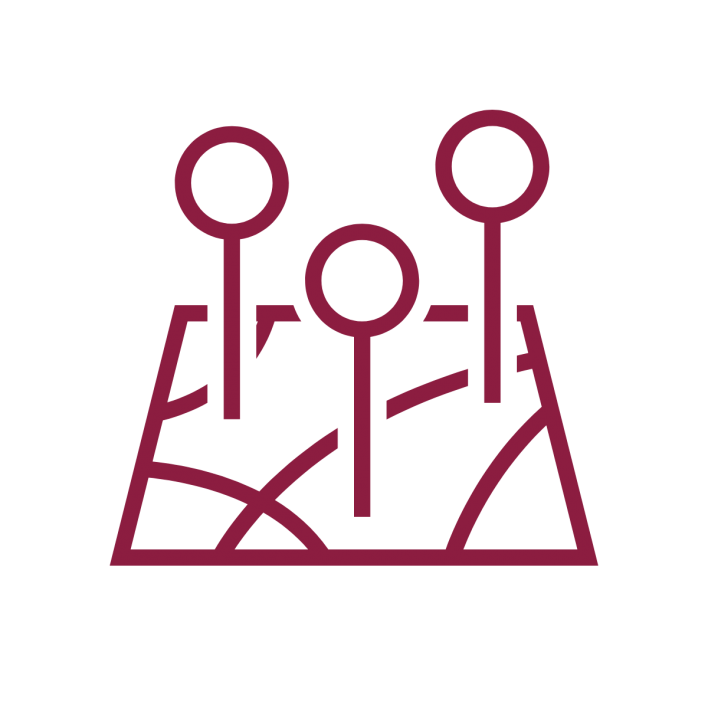 Precise positioning, called localization, is improved using 6G. Imaging and communication abilities combined can detect a device to within a centimeter of accuracy. This precision improves simultaneous localization and mapping, or SLAM, which has numerous technological applications. 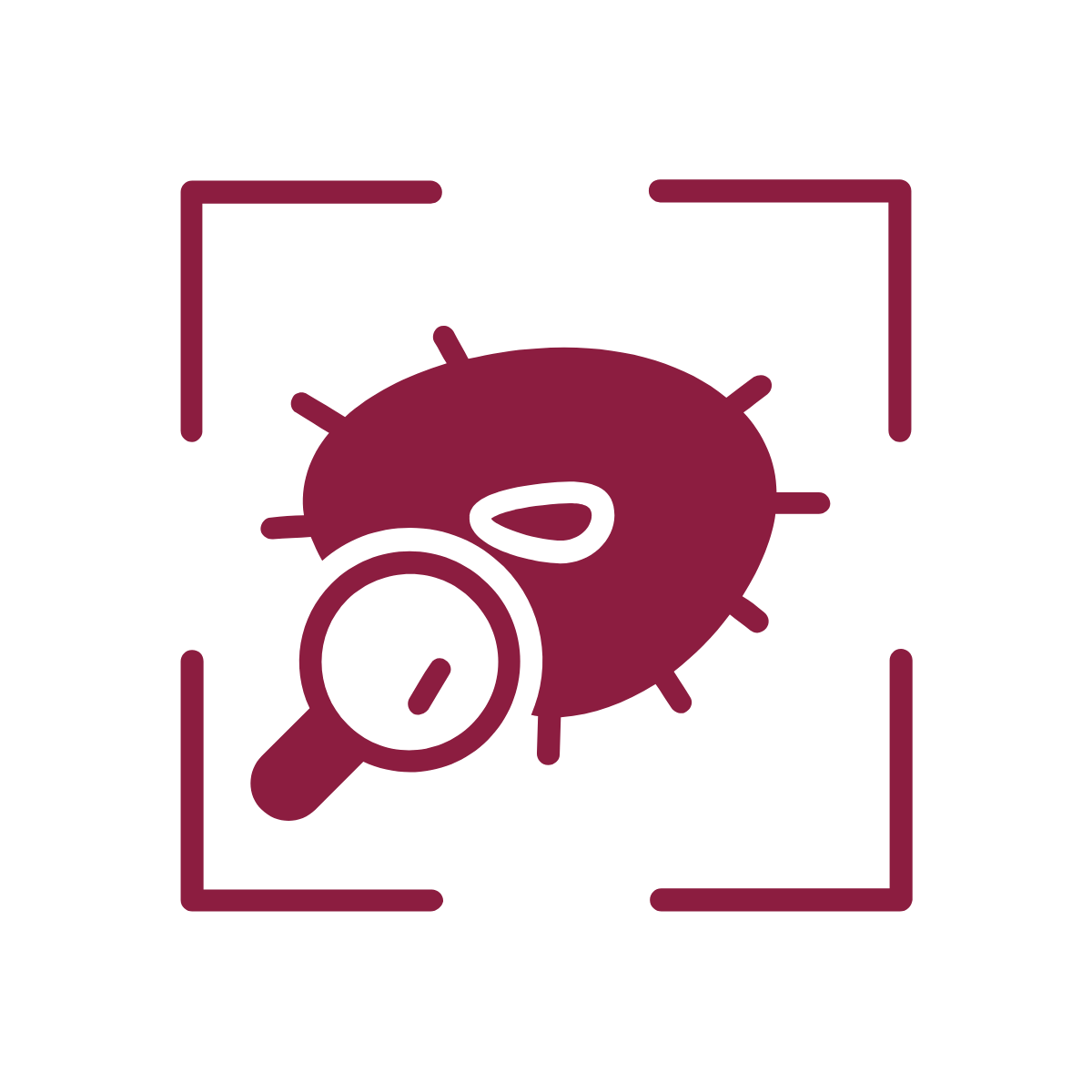 The mapping and sensing capabilities of 6G can also detect chemicals, allergens and other potential defects or other substances in the air, foods or drinks. 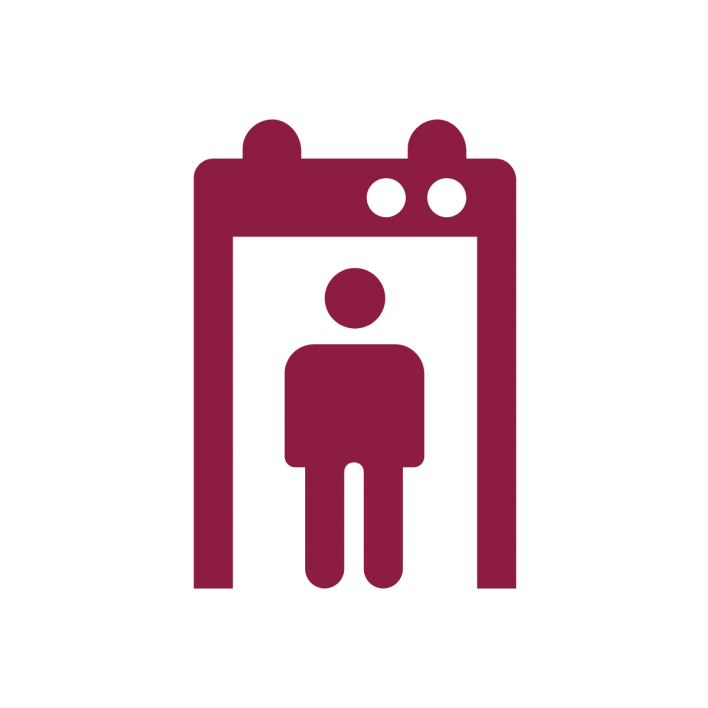 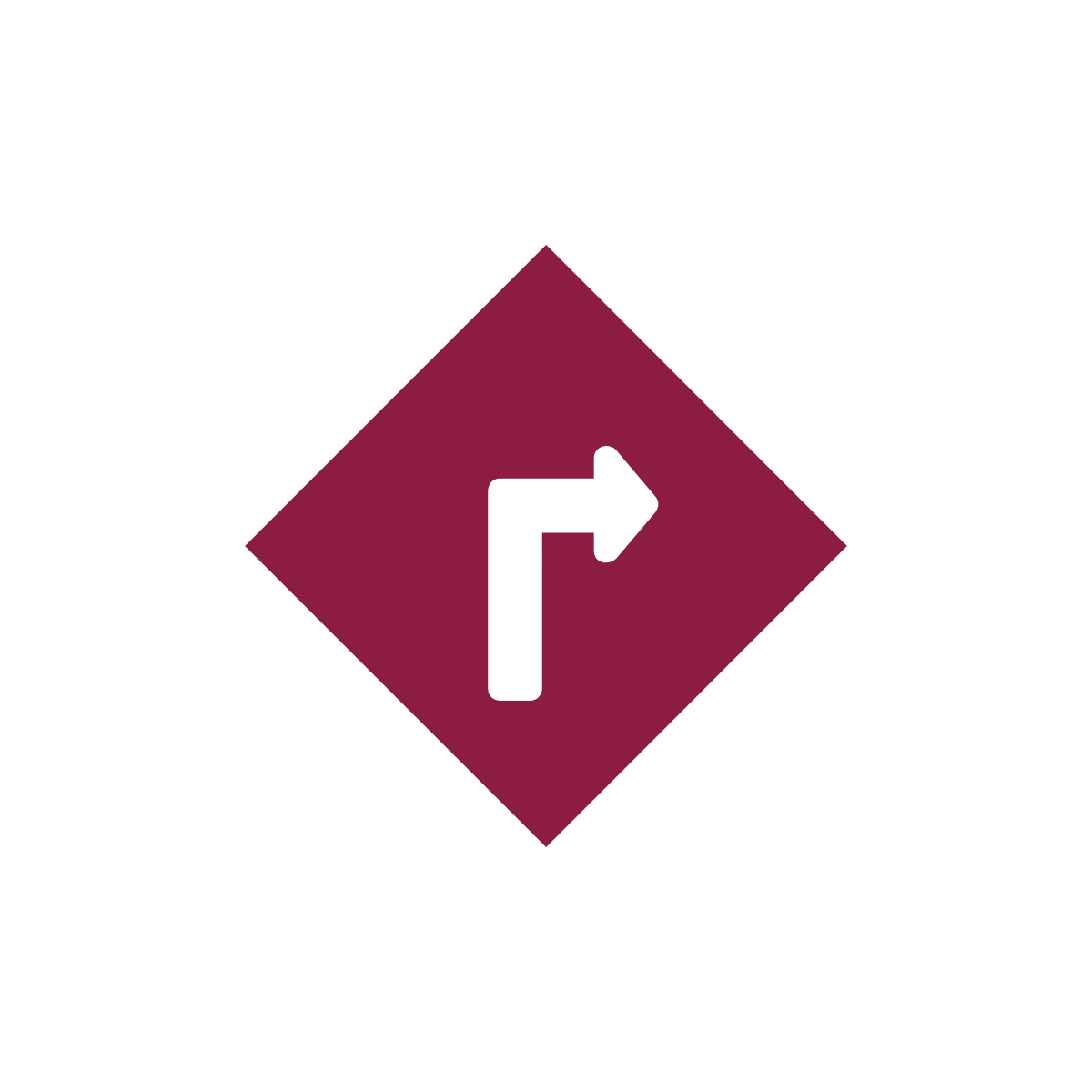 At 6G frequencies, walls, floors and doors behave like mirrors and reflect signals to other surfaces, even when they’re out of line of sight. This ability to see around corners could lead to applications in rescue, surveillance, autonomous navigation and more. 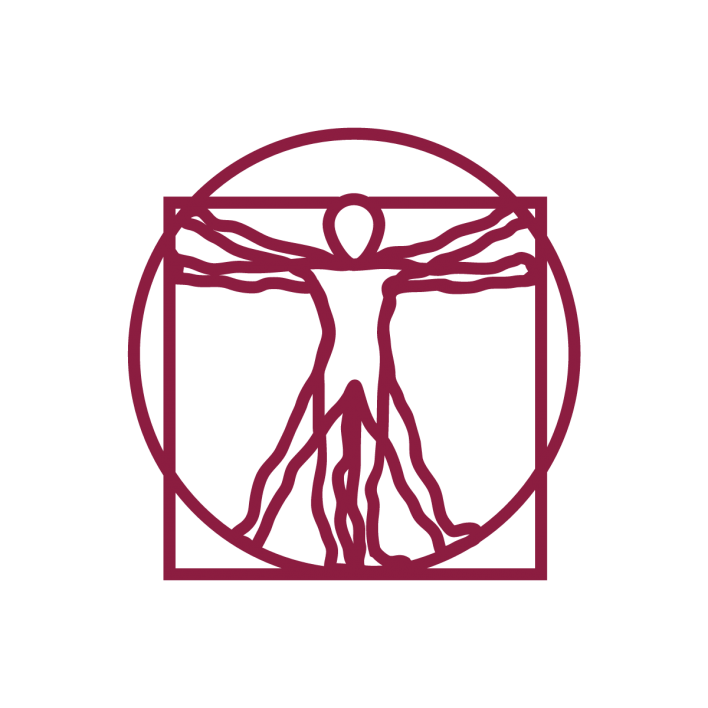 Body scanning and health monitoring capabilities will greatly expand with 6G, such as tracking vitals and detecting falls with nearby sensors or wearables.

“One plus one is more than two at 6G’s higher frequencies,” Trichopoulos said.

It all starts with higher bandwidth. Bandwidth is the maximum amount of data that can be transferred through a specific path. The current 4G wireless bandwidth is a small country road compared to the 12-lane highway capacity of 6G mmWaves. Think of how bogged down today’s wireless networks get when everyone at a stadium or large event is trying to use the internet.

Virtual reality and augmented reality applications currently suffer from a bottleneck due to low bandwidths. With higher bandwidth, VR and AR headsets could be completely wireless.

This higher bandwidth will also allow for a massive number of internet of things-connected devices (smartphones, wearables, smart appliances and more) on a single network — which is fitting since the volume of these devices is almost guaranteed to increase in the next decade. Consider how many new internet-connected devices have made their way into your home even in the last few years.

These devices could also have updated interfaces with the help of 6G’s better sensing capabilities that can “see” the world around us in ways cameras can’t.

Within a few milliseconds, a device using the 6G mmWave spectrum could use sensors to map an office, room or other complex environment. Sensing at that frequency can also detect the vibrational resonance patterns of various materials, thereby identifying objects and people in the mapped environment.

Better sensing ability has the potential to enable certain applications to detect the presence of chemicals, allergens and other potential defects or other substances in the air, foods or drinks.

Radar capabilities at 6G’s proposed frequencies have advantages over light detection and ranging, or LIDAR, which is often used for sensing in autonomous vehicles, due to the lessened impact of weather and ambient light on its abilities.

6G frequencies could also allow us to see around corners, opening up applications in rescue, surveillance, autonomous navigation and more. Above 100 GHz, walls, floors and doors typically behave like mirrors, reflecting signals to other surfaces even if they aren’t in line of sight from where the signal originated.

“This is very useful for wireless communications because mmWaves experience extreme blockage from most objects, which has a deleterious effect on the wireless links,” Trichopoulos said, describing how the 6G spectrum waves can be easily blocked, unlike 4G signals that can typically penetrate walls.

Precise positioning, also called localization, is also possible using 6G; mmWave imaging and communication can detect the position of a portable device to within a centimeter of accuracy, whether the object is in view or not. In comparison, GPS locations are accurate to within about 15 feet and mostly outdoors.

Trichopoulos and Alkhateeb are the first researchers to show proof of concept that combining imaging and communications capabilities of the 6G frequency provides localization at very high accuracy, and it can be used to see objects out of line of sight

The better mapping and localization is key to what engineers call simultaneous localization and mapping, or SLAM, which is useful for autonomous driving, robotics applications, VR and AR.

Hard(ware) to pin down

Many of these capabilities rely on improvements to the hardware that will enable 6G wireless communications network technology. The proposed 6G spectrum beyond 5G that ranges from 100 gigahertz to 3 terahertz is higher frequency than current 4G and 5G spectrums, and could enable applications outside what we often consider wireless communication technology applications. 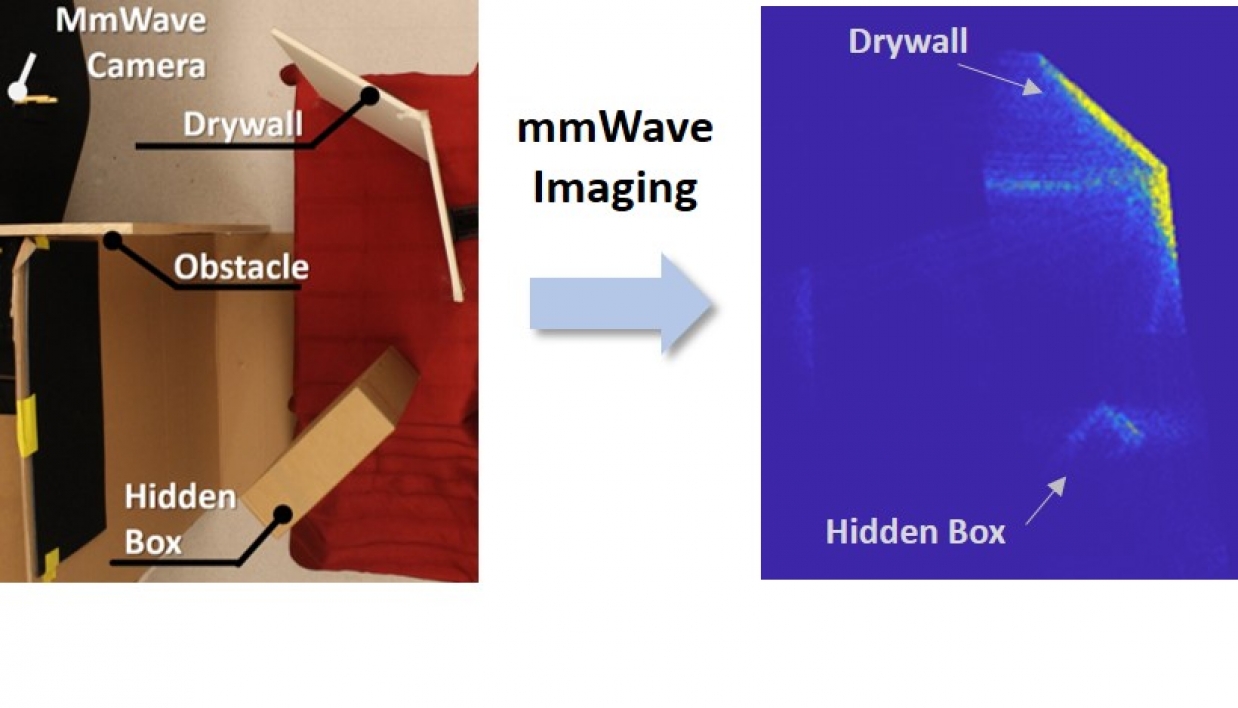 One property of 6G millimeter wave (mmWave) frequencies makes surfaces act as mirrors to reflect signals to unseen surfaces and objects. This means 6G could be used to see around corners, which would be useful for rescue, surveillance, autonomous navigation and more. George Trichopoulos holds a wafer with tiny antennas embedded into it — a precursor to the antenna hardware that needs to be developed for 6G wireless communications technology.

“The big unknown is the hardware,” Trichopoulos said. “We don’t yet have powerful sources of mmWave signals and sensitive receivers that operate (at 6G frequencies) and are cost-effective and energy-efficient.”

One drawback to the tiny wavelength of 6G frequencies is that it can be easily interrupted and weakens after a short distance. But hardware improvements in the form of new antenna arrays can make up for 6G’s shortcomings.

Trichopoulos’ research team at ASU is developing some of the hardware advances needed to support 6G devices, including large antenna arrays. In this case, "large" actually means small and refers to that large number — hundreds to thousands — of tiny antennas small enough to fit on a chip the size of a postage stamp.

Artificial intelligence and machine learning algorithms, which teach computers to do tasks on their own, need to be developed to handle 6G’s new capabilities of sensing, mapping, imaging, localization and efficient communications.

Outlining 6G’s possibilities is the first baby step in what is likely to be a decade-long journey to implementation. But it’s a worthwhile one considering all the things wireless communications technology could accomplish in the future.

Collaborating on a high-frequency future

Alkhateeb and Trichopoulos leverage expertise from other wireless technology researchers to uncover the potential capabilities of the proposed 6G frequency.

The Biodesign Institute C building on the Arizona State University Tempe campus recently earned LEED platinum certification from the U.S. Green Building Council.The $120 million Biodesign C project is the fifth ASU building to receive a platinum certification, and second this year, along with the net zero energy Student Pavilion. A platinum ranking is the highest green building ranking under the... 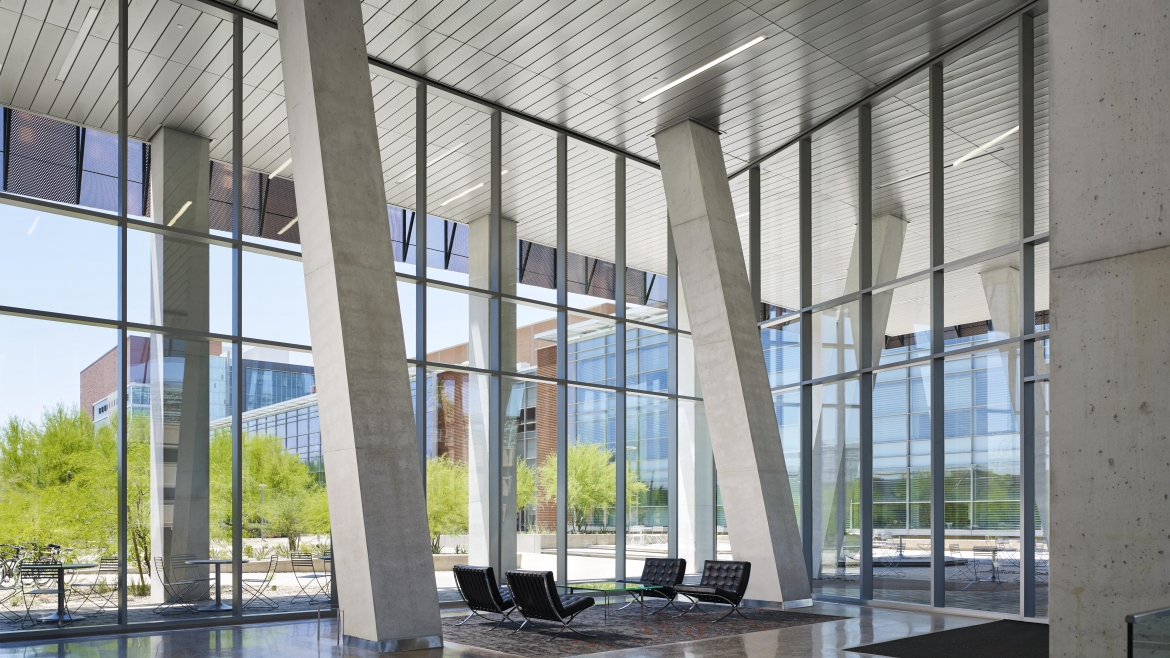 The $120 million Biodesign C project is the fifth ASU building to receive a platinum certification, and second this year, along with the net zero energy Student Pavilion. A platinum ranking is the highest green building ranking under the U.S. Green Building Council's LEED — Leadership in Energy and Environmental Design — program, which recognizes buildings that are designed and constructed to high standards of energy efficiency and sustainability.

ASU has the largest number of LEED-certified buildings in Arizona and achieved the state’s first-ever LEED platinum certification with Biodesign B.

“Biodesign C is a great example of effective collaboration between users, designers and builders at the highest level,” said Bruce Nevel, ASU Facilities Development and Management associate vice president. “The building epitomizes the balance between energy efficiency, functionality, flexibility and architectural innovation. ASU is extremely proud of not only the design and construction of this world-class research building but equally proud of the invaluable research and benefits to society which will be discovered and generated from this remarkable building.”

The 191,035-square-foot facility houses critical lab and research support space designed to accelerate ASU scientific research and enable the creation of cutting-edge, collaborative research clusters. The building will house the Compact X-ray Free Electron Laser, anticipated to be the first of its kind in the world. The inspiring space represents one more reason U.S. News and World Report ranked ASU the nation’s most innovative university for the fifth consecutive year.

“Since our researchers rely on cues from nature to find new means of confronting cancer, visualizing plaques and viruses, untangling neurodegenerative diseases and remediating environmental pollution, it is fitting that our research takes place in buildings that are eco-friendly and sustainable,” said Joshua LaBaer, Biodesign Institute executive director.

An innovative HVAC system that limits its energy and the environmental footprint was just one factor in helping the project score highest in the Energy and Atmosphere category within the LEED certification process.

“This is an impressive feat considering that laboratory buildings are more energy-intensive than the average office building and can require as much as 10 times more energy per square foot,” said Rafael de Luna III, ASU Capital Programs Management Group director. “Biodesign C achieves this efficiency through sophisticated HVAC systems and controls, energy-efficient lighting systems and a high-performance building envelope.”

Some of the sustainable design and construction features in the building include:

Since opening in September 2018, Biodesign C has garnered several awards for design and construction. Engineering News-Record designated the building as a Best of the Best Project nationwide. Biodesign C also has been recognized by AZRE magazine with a RED – Real Estate and Development – Award for Best Higher Education Project, and by the Arizona Masonry Guild with an Excellence Award.