A protest of social injustice and an opportunity for change: ASU Symphony Orchestra in collaboration with ASU Gammage is redesigning the classic orchestral concert.

“Towards a More Perfect Union” will debut its first and only show on Oct. 5 at ASU Gammage. The show follows seven unique composers through their personal journeys with the challenges of our time, backed with music from ASU students in the School of Music. 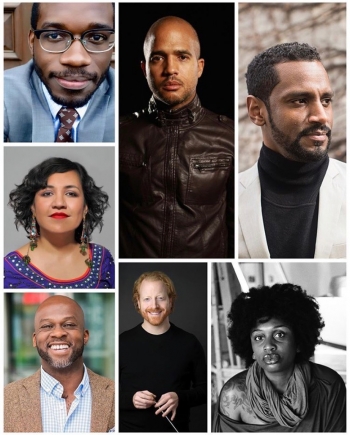 Daniel Bernard Roumain is an ASU professor of practice, institute professor, composer and co-director of “Towards a More Perfect Union.” He said this performance is intended to make the audience take a step back and reevaluate the perspective they have on society.

“I hope (the audience) has a new sensitivity and empathy towards people of color,” Roumain said. “I would like them to think of this as a challenge in a way that is engaging and to continue the conversation and dialogue.”

Jeffery Meyer, co-director for "Towards a More Perfect Union" and associate music professor at ASU, said the conversation for this new style of concert began around two years ago.

Meyer said when he first met Roumain, he was immediately interested in his style of work.

“(Roumain) has a very interesting career, and I wanted to know how I could get the orchestra involved,” Meyer said.

The seven featured artists came together quite organically, Roumain said.

“All of their works are quite original,” Roumain said. “I know their music and their work really well and thought they would make a really good fit for our students here and orchestra here.”

Roumain said he thinks this will be a unique opportunity for people in Tempe and the Phoenix area to explore these questions that are often not discussed.

“There has been great backlash against people of color and immigrants in the United States, and this concert is not an answer to that, but a deep look into the diversity that forms our society,” Meyer said.

The show will involve music, spoken word, film and other multidisciplinary forms of art.

Student tickets are $10; purchase all other tickets for $20.

When it comes to innovation, Arizona State University casts a wide net from its metropolitan Phoenix home base. Partnerships form close to home and throughout the far corners of the globe, fertilizing ideas with new perspectives and possibilities. 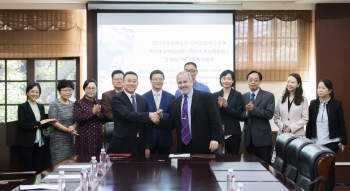 A new ASU partnership was launched on Sept. 20, in the city of Chengdu, China, when leaders from ASU and West China Hospital/West China School of Medicine of Sichuan University inked an agreement that will bring new resources to both institutions, creating the new Biodesign Institute China, West China Hospital.

“ASU’s Biodesign Institute and West China Hospital are committed to pursuing solutions that will create more effective diagnostics and treatments and vaccines that will help in the prevention of cancer and infectious diseases,” said Joshua LaBaer, executive director of ASU’s Biodesign Institute. Both organizations have developed key strengths in areas such as personalized medicine, immunotherapy and synthetic biology. Explaining that West China Hospital matches the aspirational and intrepid culture of the Biodesign Institute, LaBaer noted that the institutions are both "relentless in (their) search for answers to improve the quality of life for people all over the world.”

One goal of the exchange is to accelerate the rate of scientific discovery and bring new solutions to people and the marketplace more rapidly.

“Our collaboration will take advantage of various disciplines at ASU and WCH to promote joint research and innovation in science and technology, especially in the area of biological design,” said West China Hospital President Li Weimin.

Graduate and postdoctoral students from both organizations will have opportunities to work with world-class scientists both in China and the U.S. A joint management committee will guide the development of new programs and the attainment of shared goals.

Like ASU’s Biodesign Institute, WCH is organized into several research centers, each focusing on a specific area of scientific work. For each center established at WCH there will be a scientific center director from either West China Hospital or ASU’s Biodesign Institute, with each partner dedicated to the robust exchange of knowledge and resources. The director will recruit faculty in areas such as biochemistry, physics, software design, cell biology, chemical engineering, bioinformatics, statistics and automation.

Considered China’s Silicon Valley, Chengdu is an international hub for scientific research and advanced technology. The West China Hospital organization includes a pharmaceutical research and development operation, a research park and a translational medicine center. It also has the largest biomedical research facility in China. Comprehensively, it ranked No. 2 among all the hospitals in China for nine years consecutively, while its research influence ranked No. 1 for five yearsAs ranked by the Chinese Hospital Science & Technology Influence Ranking.

West China Hospital is one of the largest single-site hospitals in the world, with 4,300 beds on the two campuses in Chengdu.

Entering into a partnership brings not only added brainpower and research support, but also the opportunity to pursue large-scale, high-impact research programs with the goal of fast-tracking new solutions to health and sustainability challenges that cannot easily be solved in isolation.

ASU works with 10 top universities in China, as well as the Chinese Academy of Sciences and the Ministry of Science and Technology. The university’s programs in China include the global Decision Theater Alliance, the Center for American Culture and an executive MBA program under the auspices of the Chinese Ministry of Finance.

ASU’s global outreach extends into numerous countries, including degree programs in biomedical diagnostics and precision medicine with Dublin City University of Ireland; sustainability, energy and engineering partnerships with the National Autonomous University of Mexico, Monterrey Institute of Technology and Higher Education, and the University of Sonora; partnerships with Ben-Gurion University of the Negev-Israel and the Abdulla Al Ghurair Foundation for Education in Dubai; and the PLuS Alliance with King’s College London and UNSW Sydney, a tricontinental partnership with a goal of arriving at research-led solutions to global challenges and expanding access to world-class learning, including a jointly developed Bachelor of International Public Health degree program.

In addition to its growing international presence, groundbreaking international public-private partnerships, such as the Starbucks College Achievement Program and the redesign of engineering education in Vietnam and teacher education in India, add to ASU’s portfolio of opportunity, leading it to recently be named “No. 1 in Innovation” for the fifth consecutive year by the 2019 U.S. News and World Report.