Choline is a safe and easy-to-administer nutrient that is naturally present in some foods and can be used as a dietary supplement. Lead author Ramon Velazquez and his colleagues at the ASU-Banner Neurodegenerative Disease Research Center looked into whether this nutrient could alleviate the effects of Alzheimer’s. 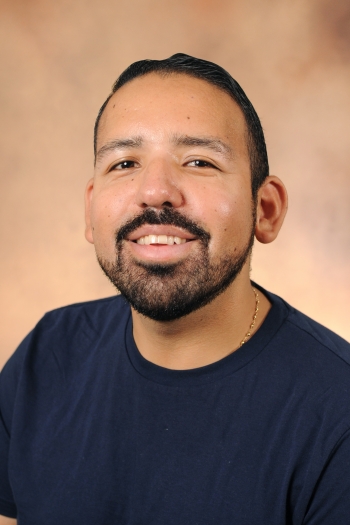 Earlier this year, Velazquez and colleagues found transgenerational benefits of Alzheimer's-like symptoms in mice whose mothers were supplemented with choline. The latest work expands this line of research by exploring the effects of choline administered in adulthood rather than in fetal mice.

The study focuses on female mice bred to develop Alzheimer's-like symptoms. Given the higher prevalence of Alzheimer's disease in human females, the study sought to establish the findings in female mice. Results showed that when these mice are given high choline in their diet throughout life, they exhibit improvements in spatial memory, compared with those receiving a normal choline regimen.

Notably, findings published in July 2019 from a group in China found benefits of lifelong choline supplementation in male mice with Alzheimer's-like symptoms. “Our results nicely replicate findings by this group in females,” Velazquez said.

Intriguingly, the beneficial effects of lifelong choline supplementation reduce the activation of microglia. Microglia are specialized cells that rid the brain of deleterious debris. Although they naturally occur to keep the brain healthy, if they are overactivated, brain inflammation and neuronal death, common symptoms of Alzheimer's disease, will occur.

The observed reductions in disease-associated microglia, which are present in various neurodegenerative diseases, offer exciting new avenues of research and suggest ways of treating a broad range of disorders, including traumatic brain injuries, multiple sclerosis and Parkinson’s disease.

The findings appear in the current issue of the journal Aging Cell. 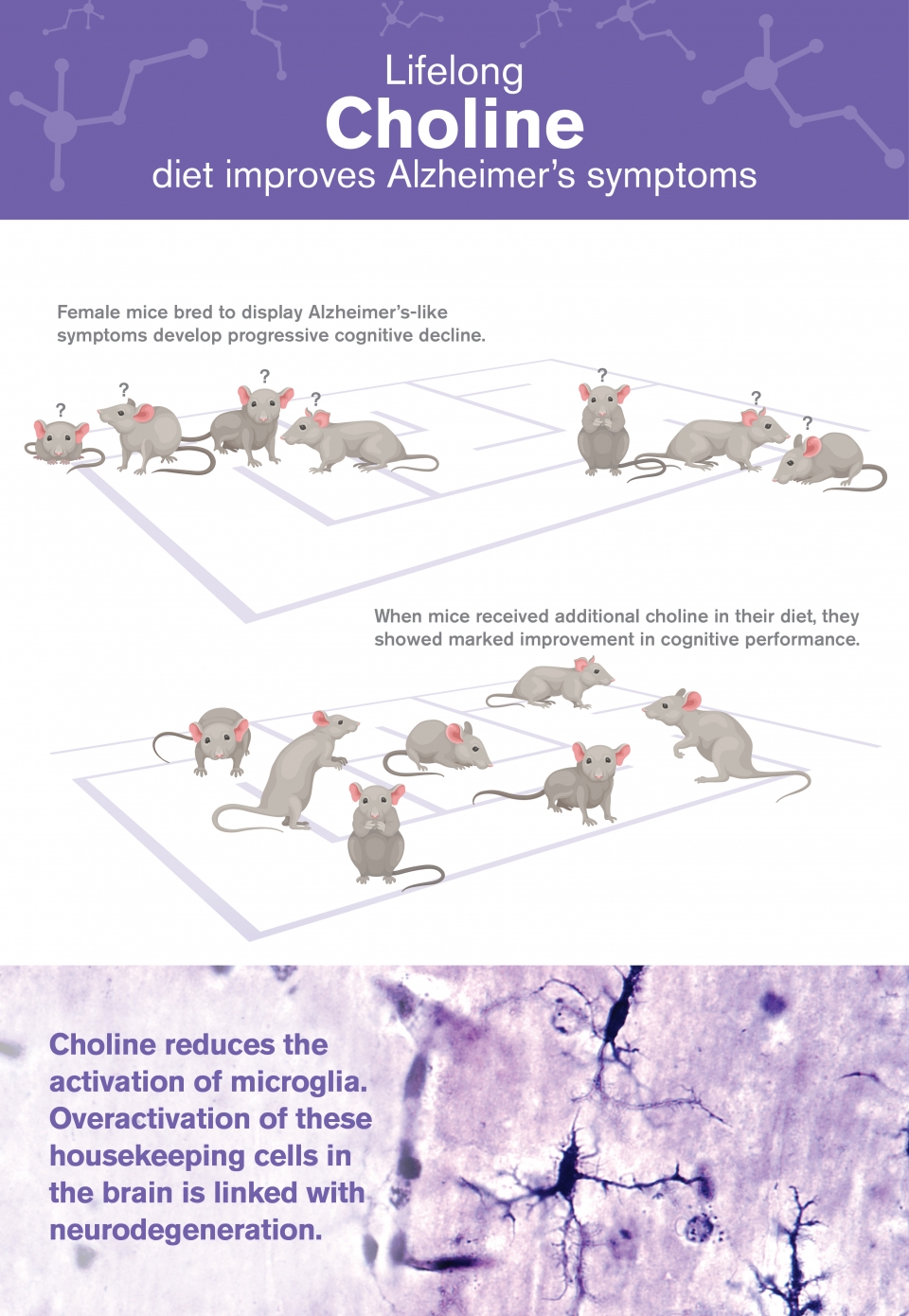 Results showed that when these mice bred to display symptoms of Alzheimer's disease are given high choline in their diet throughout life, they exhibit improvements in spatial memory, compared with those receiving a normal choline regimen.

Supplementing the brain with additional choline

Choline acts to protect the brain from Alzheimer's disease in at least two ways, both of which are explored in the new study. First, choline blocks the production of amyloid-beta plaques. Amyloid-beta plaques are the hallmark pathology observed in Alzheimer’s disease.

In the scientific community, it is well understood that Alzheimer’s disease causes harm to the brain long before clinical symptoms are made evident. And once these symptoms are identified, it is too late — the disease has become irreversible. In addition to causing disorientation and memory loss, the disease causes loss of motor control in those who are afflicted.

Approximately 6 million individuals are living with Alzheimer's disease in the U.S. currently, and the disease is projected to afflict 14 million Americans in the next four decades. Economically, the costs associated with managing Alzheimer's are expected to exceed $20 trillion in the same time span.

To develop more effective treatments, we first need to understand the disease itself, which is one of the tallest orders facing modern medicine today.

Women are at a particular increased risk of developing Alzheimer’s disease. This study shows that the simple addition of choline in the diet throughout life may reduce Alzheimer's disease pathology in those most affected by the disease. Additionally, these results have implications for other neurodegenerative afflictions where activated microglia are rampant, says Velazquez.

Prior research concerning Alzheimer’s has indicated that there is no one factor at play. Rather, a multitude of factors are believed to contribute to the development of the disease, including genetics, age and lifestyle. Additionally, studies suggest that diet can have a significant effect in increasing or lowering the risk of cognitive decline.

A recent report suggested that plant-based diets may be determinantal due to the lack of important nutrients, including choline. Another recent report found that the increase in cases of dementia in the United Kingdom may be associated with a lack of recommendations for choline in the diet throughout life. In fact, as of August 2019, Alzheimer's disease and other forms of dementia are now the leading cause of death in England and Wales.

The current established adequate intake level of choline for adult women (more than 19 years of age) is 425mg/day, and 550mg/day for adult men. A converging line of evidence indicates that even the current recommended daily intake (RDI) may not be optimal for a proper aging process, especially in women. This is relevant, given the higher incidence of Alzheimer's disease seen in women. This suggests that additional choline in the diet may be beneficial in preventing neuropathological changes associated with the aging brain.

The tolerable upper limit (TUL) of choline unlikely to cause side effects for adult females and males (more than 19 years of age) is 3500mg/day, which is 8.24 times higher than the 425mg/day recommendation for females and 6.36 times higher than the 550mg/day recommendation for males. “Our choline supplemented diet regimen was only 4.5 times the RDI, which is well below the TUL and makes this a safe strategy,” Velazquez said.

All plant and animal cells require choline to maintain their structural integrity. It has long been recognized that choline is particularly important for brain function.

The human body uses choline to produce acetylcholine, a neurotransmitter responsible for functioning memory, muscle control and mood. Choline also is used to build cell membranes and plays a vital role in regulating gene expression. Additionally, a new report in Jan 2019 found that choline acts as an agonist for Sigma-1 receptors, which are implicated in Alzheimer's disease pathogenesis.

In this study, researchers used a water maze to determine whether the mice with Alzheimer's-like symptoms that received lifelong supplemental choline exhibited improvements in spatial memory. It was found that this was indeed the case, and subsequent examination of mouse tissue extracted from the hippocampus, a brain region known to play a central role in memory formation, confirmed changes in toxic amyloid-beta and reductions in microglia activation, which reduces brain inflammation.

Due to alterations of key microglia receptors induced by choline, the improvements in behavior may be attributed to reduced microglia activation.

"We found that lifelong choline supplementation altered the alpha7 nicotinic acetylcholine and Sigma-1 receptor, which may have resulted in the reduction of diseased associated activated microglia," Velazquez said. These receptors regulate CNS immune response and their dysregulation contributes to Alzheimer's disease pathogenesis. 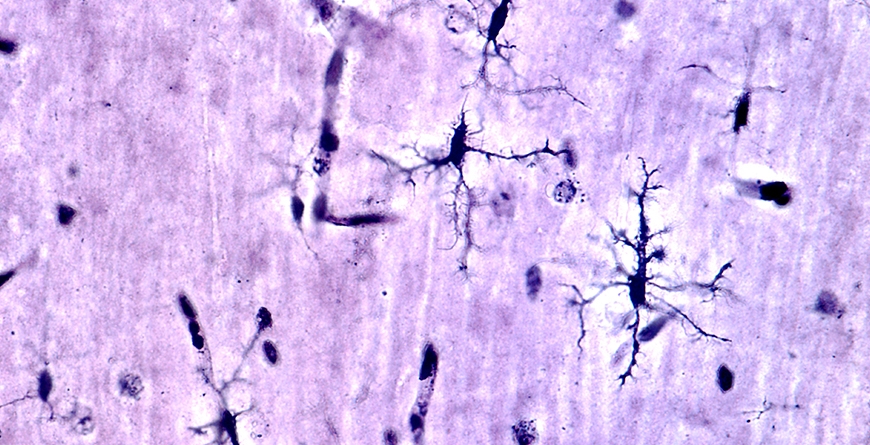 Microglia are specialized cells that work to clear away debris in the brain and perform other essential duties. These cells typically become dysregulated in Alzheimer's disease, leading to inflammation and neuronal death. Intriguingly, the beneficial effects of lifelong choline supplementation reduce the activation of microglia in mice bred to develop AD-like symptoms. The choline-rich diet is shown to improve cognitive function.

The study's significance establishes beneficial effects of nutrient supplementation in females throughout life.

Choline is an attractive candidate for prevention of Alzheimer's disease as it is considered a very safe alternative, compared with many pharmaceuticals. “At 4.5 times the RDI, we are well under the tolerable upper limit, making this a safe preventive therapeutic strategy.”

Although the results improve the understanding of the disease, the authors suggest that clinical trials will be necessary to confirm whether choline can be used as a viable treatment in the future.

Kinesiology junior Cassaundra Gomez was sitting in BIO 102 last spring at Arizona State University’s Downtown Phoenix campus when she first learned about a unique opportunity.Her anatomy and physiology lecturer Tonya Penkrot was telling students about a fieldwork trip over the summer in Bighorn Basin, Wyoming, that would give them hands-on experience in paleontology.“She mentioned it in class,...

Her anatomy and physiology lecturer Tonya Penkrot was telling students about a fieldwork trip over the summer in Bighorn Basin, Wyoming, that would give them hands-on experience in paleontology. 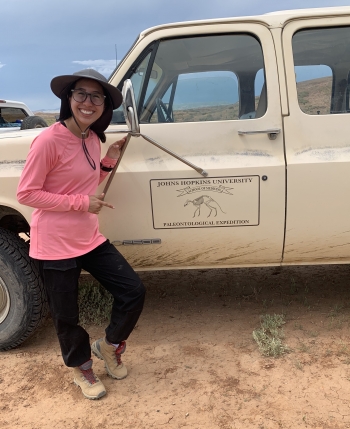 “She mentioned it in class, and I was like, ‘I’m down. That sounds exciting,’” Gomez said.

When she signed up, Gomez said she didn’t really know what to expect from the trip, but that she ended up learning a lot and enjoyed the adventure.

“It’s really interesting to learn from (fossil mammals) because we’re mammals. You find lots of teeth and from that you can learn what their diet needs were like.”

Gomez doesn’t plan to go into paleontology, but she said the fieldwork was still insightful to her kinesiology studies.

“It further reinforces anatomical knowledge and gave me a better idea about bone structure,” Gomez said.

Gomez received financial support to go on the fieldwork trip by using the Scholarship Honoring Anatomy and Physiology Education and Research (SHAPER), which is funded from the royalties of the BIO 201 and 202 course lab manual fees.

Penkrot and fellow anatomy and physiology faculty members Jeff Kingsbury, senior lecturer, and J. P. Hyatt, associate professor, collaborated with then-lab manager Jennifer Legere to create a lab manual to better serve student learning and to build funds for a scholarship students can use for research, application fees, conference fees or other special educational opportunities in the realm of anatomy and physiology.

Penkrot wants to create opportunities like the ones she experienced when she was in school, because she knows what a big impact they can have on students.

“When I was an undergrad, my adviser knew I was interested and helped put me in contact with a person who knew another person who did fieldwork in Wyoming,” Penkrot said. “That simple act, it changed the course of my life.”

That person ended up becoming Penkrot’s thesis adviser, Kenneth D. Rose, emeritus faculty at John Hopkins University School of Medicine, who still organizes that same fieldwork trip annually. Once participants arrive in Wyoming, his group sets up a campsite from which they go out each day to various localities to look for fossil mammals.

“I thought there would be a lot of digging, but really you just walk around and look on the ground," Gomez recounted of their daily activities. “Everyone usually thinks paleontology is dinosaurs, but we’re actually looking at mammals.”

At the end of the day, participants return to camp and compare what they found with each other, then carefully package up the fossils to be transported to Rose’s lab, or to the Denver Museum of Natural History for permanent cataloguing and housing.

Penkrot said studying fossils is important to better understand how things have evolved, and she hopes that experiences like this help students see the value in natural resources.

“I hope that students will get an appreciation and a sense for why it is so important to preserve and protect all natural resources, not just those that have a dollar value attached to them. Places like the Bighorn Basin represent irreplaceable records of a part of the history of life on Earth, and deserve to be studied, protected and managed responsibly,” Penkrot said.

Gomez is appreciative of the opportunity and highly recommends the trip to her fellow classmates.

“It was definitely a great experience,” Gomez said. “I would do it again if I could.”