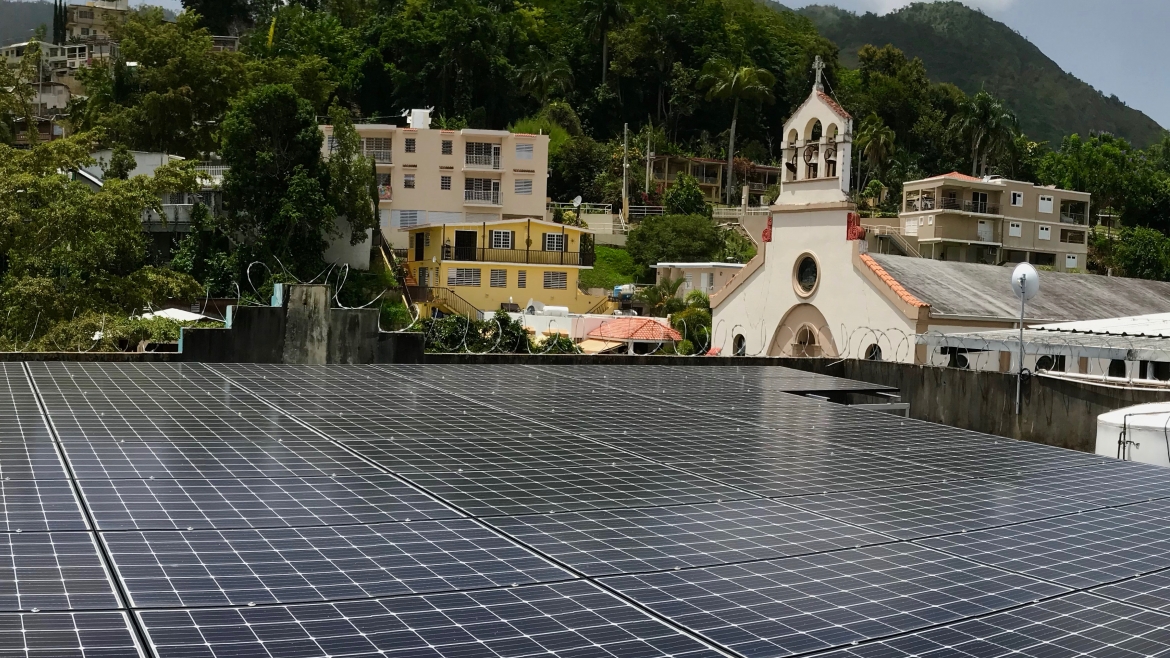 'Hurricane Maria ... is still there'

Two years ago, Yiamar Rivera-Matos was at home with her family in Jayuya, a rural mountain town of about 12,000 people in the center of Puerto Rico, when Hurricane Maria hit.

The family lived without power for three months, cooking with small gas tanks and eating canned food and root vegetables that survived the tempest. Her mother had lived through Hurricane Georges in 1998 and knew what to expect. She rationed all their supplies. Everyone got two bottles of water and four potatoes per day.

“I was like, ‘Let’s share food with everyone,’” Rivera-Matos said. “My mom, she said it was going to get worse. ‘Be prepared. We need to count the stuff we have. If you share with everyone, you will be without eating. We will have no food.’ I was like, ‘Hmm. Interesting.’”

Two years later, power has been restored to Puerto Rico, but next-level reconstruction hasn’t happened. Now, Rivera-Matos is a PhD candidate at Arizona State University, where she, her professor and other Puerto Rican students began work this summer to bring renewable energy to the island.

The average median income in Puerto Rico is half that of Mississippi. Energy costs are high because they burn oil in power plants. All of the oil is imported. They import $8 million of carbon per day — $3 billion per year — and it’s burnt. (Arizona imports $15 billion. It’s also burnt.)

“If you could replace importing oil from the rest of the world and burning it, you could invest in local sources, locally owned energy supplies, like solar, wind and so forth,” said Professor Clark Miller. “You take what is essentially a tax on your economy and turn it into an investment in your economy.”

Miller directs the Center for Energy and Society in the School for the Future of Innovation in Society. He studies the societal implications of large-scale energy transitions. He is directing a project working with Puerto Rican towns to design solar projects that help, not hinder, the community.

“That’s the goal of the project,” Miller said. “How can we design not just the technical part of the project but the ownership and social organization of the project so that it creates lots of social value of energy? The goal is to design solar projects so that they work in this value-creation way to help the community get out of poverty? It becomes an engine of poverty eradication.”

A number of mainland universities offered aid to researchers and students the University of Puerto Rico. Miller asked if ASU wanted to take part. The Office of the University Provost said yes immediately.

“We’ve had this whole big program of collaboration that has developed out of that,” he said.

Three PhD students came to ASU, working on energy justice issues for their research. They found a Department of Energy solicitation looking for projects that explore strategies for using solar energy to help low-income communities.

There was talk about how the island could use solar energy to solve its problems, but not a lot happening on the ground. Two weeks after Maria, there was a flurry of high-level discussions (Elon Musk, the governor) about how solar was going to be the future of Puerto Rico. Islanders were excited about this. Officials set a target of running completely on renewable energy by 2050.

“The flip side is very little has happened on the ground,” Miller said.

Congress has not allocated money for reconstruction. Massive potholes scar roads. Roofs are still covered in blue tarps. The power goes on and off.

Miller and his students proposed looking at how solar energy power and markets had been developing on the island since Maria. They decided to select a number of low-income communities for case studies and collaboratively work with them to design solar strategies using solar energy to “disrupt the energy-poverty nexus,” as Miller says.

“For most of us, energy is a background we really don’t think about,” he said. “We kind of just pay for what we use. Energy is also an important driver of economic growth and development for many communities, businesses and households. But for the poorest it can actually reinforce and make it harder to get out of poverty. We call that the energy-poverty nexus.”

For instance, folks who can’t afford to insulate a roof may use more power to cool their house. If they have an old air conditioning unit, it may not be as energy-efficient as a newer unit. Energy costs eat up more of their income.

Phase one of the $1.3 million project took place last summer. Miller and his students crisscrossed the island for months, trying to understand the current dynamics of solar power.

“We interviewed people from the businesses, policy makers, financing sector, other researchers like us, people from communities across the island, and other actors that are part of the complex energy ecosystem of the island,” said Angel Echevarria, who is earning his PhD in Human and Social Dimensions of Science and Technology from the School for the Future of Innovation in Society.

"There is no one-size-fits-all effort, so everyone has had to figure this out for themselves, all driven by the knowledge they could have another hurricane at any time."
— ASU Professor Clark Miller

The idea was to get the whole picture before they identify 12 to 15 candidate communities. Out of those, they will choose four to work with.

Currently there is a fairly active set of solar businesses. Their market has shifted to relatively wealthy people and small businesses, big-box retailers and so forth.

“But there’s a lot bigger demand for this, and a lot of people can’t afford to participate,” Miller said. “It’s tied in with the compete failure of the federal government to deliver reconstruction money to Puerto Rico over the past two years. ... Next-level reconstruction has not happened.”

(One part of the problem is that for a federally funded rooftop solar system to be installed, a house has to be up to code. That shuts out many homes in Puerto Rico.)

One community got a gift of $10,000. They bought five $2,000 solar systems — microsystems that can run a fridge and maybe a few lights. (The typical home system in Phoenix runs $10,000 to $20,000.) Households will buy and install the systems, then the community will buy five more. “It’s kind of a rolling pool,” Miller said.

“All these different models are emerging, in part because there is no government program,” he said. “There is no one-size-fits-all effort, so everyone has had to figure this out for themselves, all driven by the knowledge they could have another hurricane at any time.”

Surviving the hurricane and experiencing firsthand the energy-poverty nexus put a different cast on the work for Echevarria.

It “allowed me to be exposed to all sorts of subtle but intricate relationships between human built environment, human and socially created institutions, our current energy system and many others that, when combined, only reinforce each other and not in the favor of our well-being,” he said. “Those experiences, not only mine, but shared among Puerto Ricans, are one of my main drivers for participating in this research study.”

Memories of eating canned food for three months are stuck in Rivera-Matos’ memories. Other people had it worse, she said; folks in rural areas ate canned food and military rations for a year.

Rivera-Matos is earning her PhD in Human and Social Dimensions of Science and Technology. She has three years to go.

“I want to keep working in energy, but I don’t know from which perspective, if academia will be the best option or getting into Puerto Rico with a nongovernmental organization,” she said. “I’m still exploring that part.”

The hurricane hasn’t ended, she said.

“I would love to go home and work on the energy grid in Puerto Rico, but things are getting worse and worse,” she said. “Not just from a research perspective but from a personal and Puerto Rican perspective, I was like, Wow! It’s worse now. People are getting less jobs. ... I think Hurricane Maria is still going on now. It’s still there. That’s something I have to take into consideration.”

Miller is pleased with his students.

“These are fantastic young people, really passionate about the future of Puerto Rico, really committed to making it a place that works,” he said.

Top photo: A solar system on top of a medical clinic, in the town of Jayuya, Puerto Rico. Photo courtesy of Clark Miller

Gameday: No. 24 Football vs. Colorado

Gameday: No. 24 Football vs. Colorado No. 24 Football hosts Colorado in the annual Green Game at Sun Devil Stadium. Kickoff is set for 7 p.m. on Pac-12 Network and ESPN Radio 620 AM.