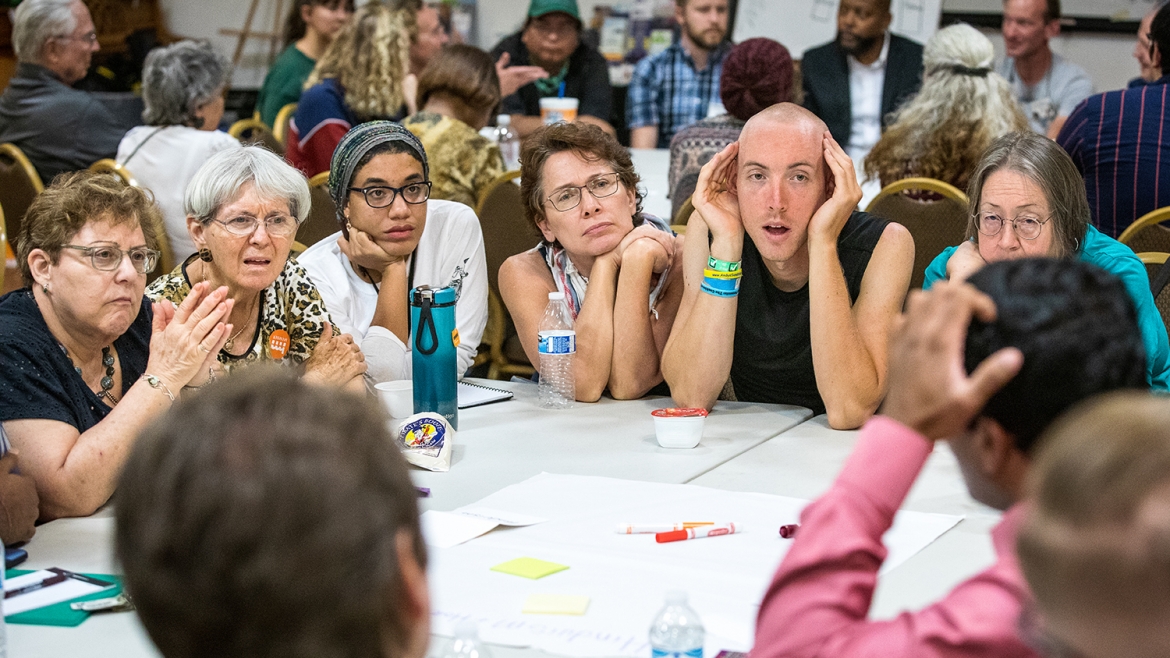 Casting out demons, myths and stereotypes

They hold regular jobs, pay taxes and are people who care about their communities. As it turns out, they’re ordinary folks. They just worship differently, that’s all.

Arizona State University’s Project Humanities provided a forum to allow these groups to sit and talk with community members to dispel all the myths and rumors surrounding their practices and beliefs in an effort to better understand one another.

“Facilitating challenging critical conversations is a hallmark of our programming,” said Neal A. Lester, director and founder of Project HumanitiesThe award-winning initiative brings together individuals and communities from around Arizona to instill knowledge in humanities study, research and humanist thought. Project Humanities facilitates conversations across diverse communities to build understanding through talking, listening and connecting.. “This program brings together unique and too often marginalized perspectives on diverse faith systems. The world cafe format means that attendees can sample diversity even within these faith systems.”

The award-winning initiative hosted “Dispelling the Myths: Heretics, Pagans, Atheists and Polytheists,” on Wednesday in Mesa and more than 100 people showed up — double than what was originally anticipated — to a program designed to dispel a slew of myths all while offering up alternative worldviews on empathy, compassion, kindness, forgiveness, integrity, respect and self-reflection.

Lester invited satanists, Hare Krishnas, Hindus, pagans, Wiccans, atheists and secular humanists to the discussion table to learn from each other and underscore poet Maya Angelou’s words: “We are more alike, my friends, than we are unalike.”

Lester said to the standing room-only crowd that they were there not to debate but to critically analyze the issues before them.

“This is also an opportunity for us to learn and let you educate us,” Lester said.

And learn they did. 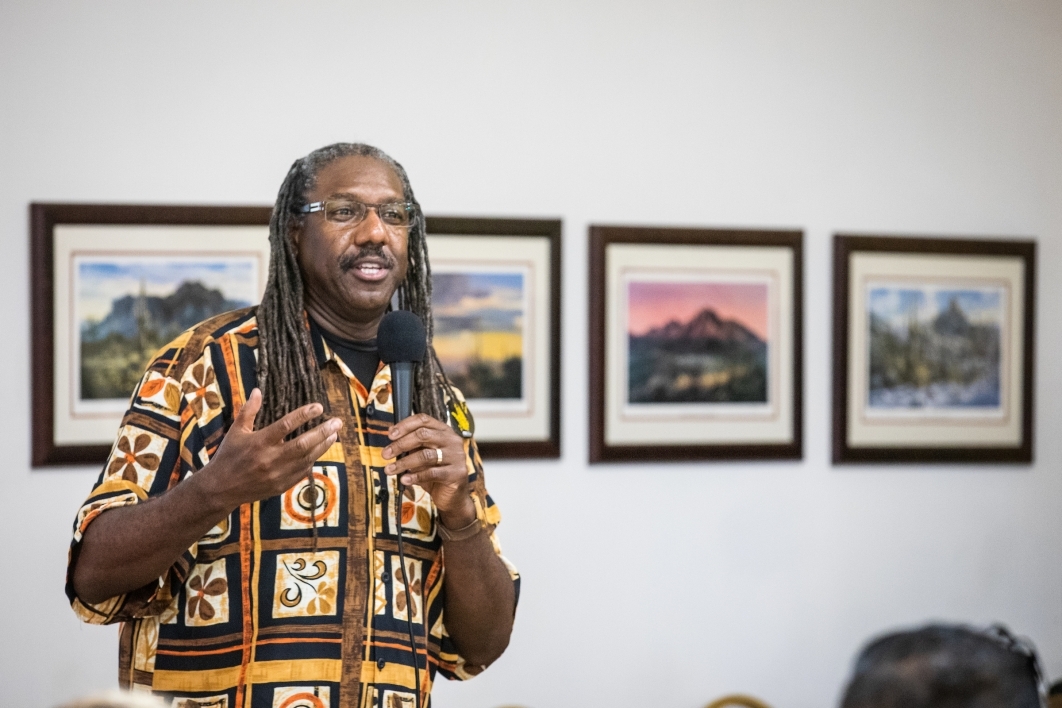 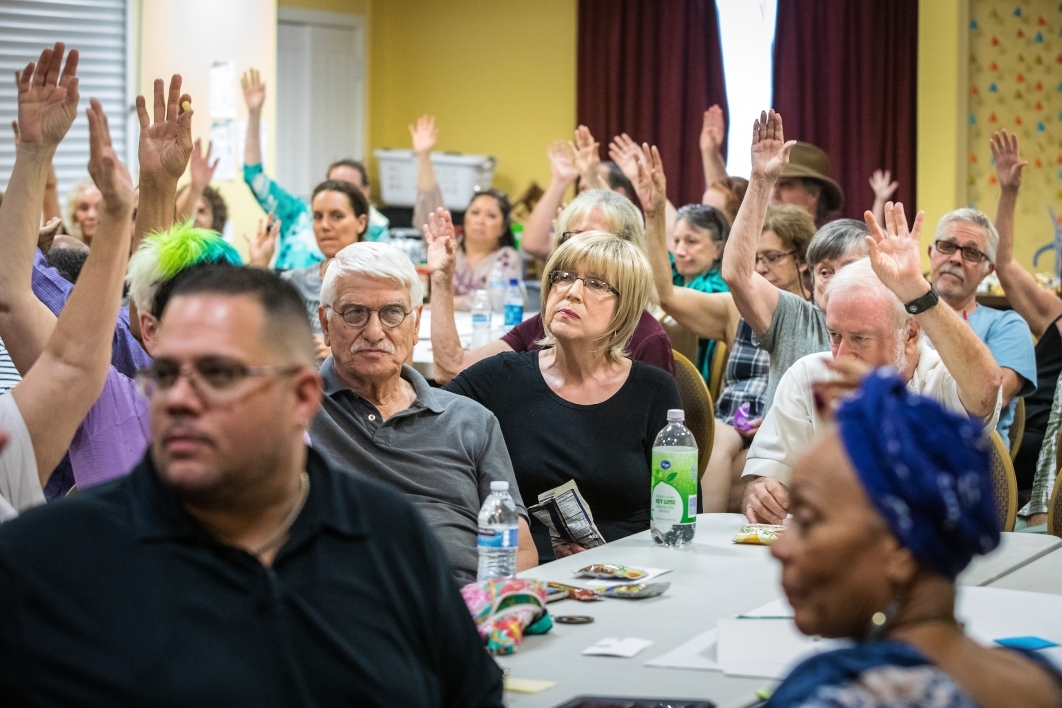 Nearly all of the attendees showed they share common values at the Project Humanities' discussion. 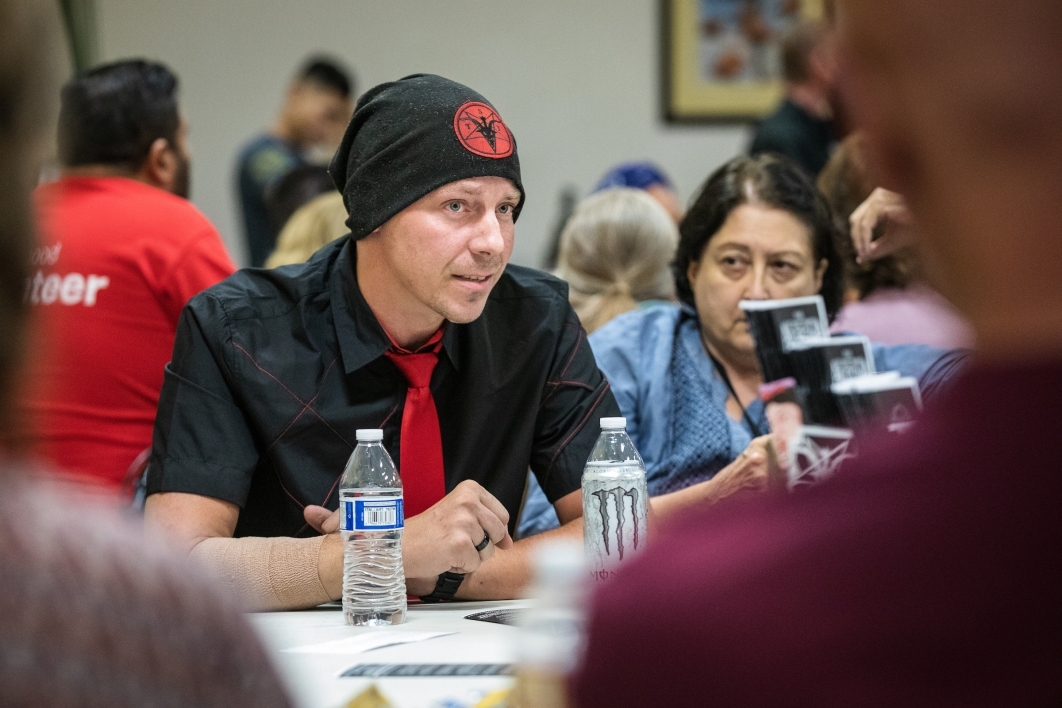 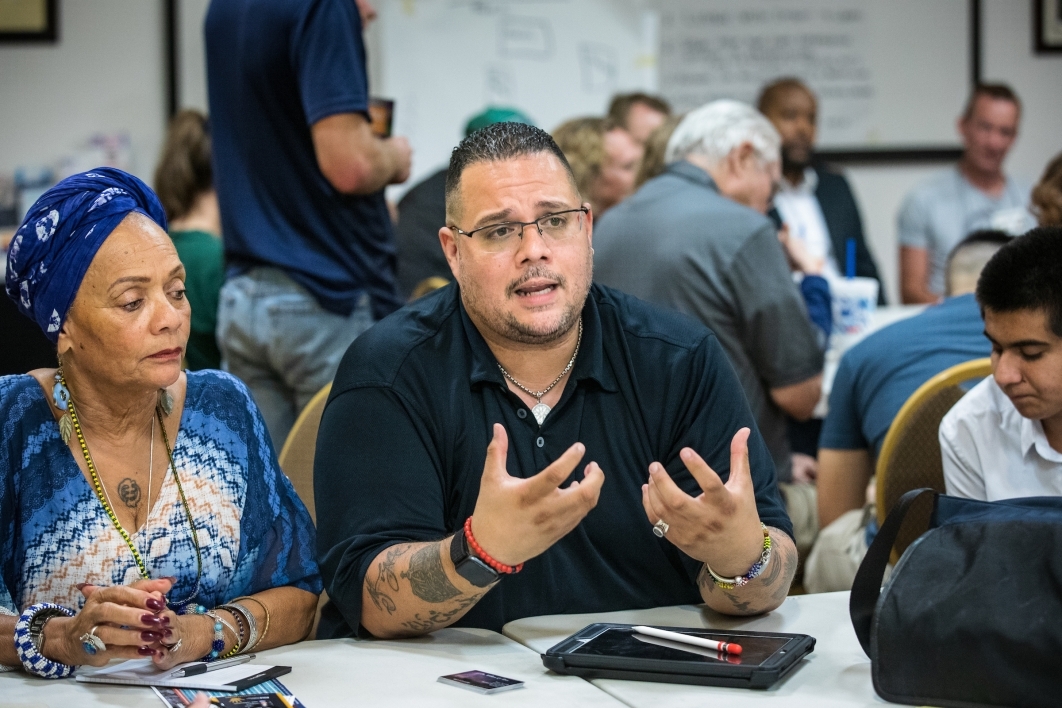 Founder and president of the Ashe Ministry William Q. Ross engages others in discussing Santería, an African spinoff of Catholicism from Cuba. 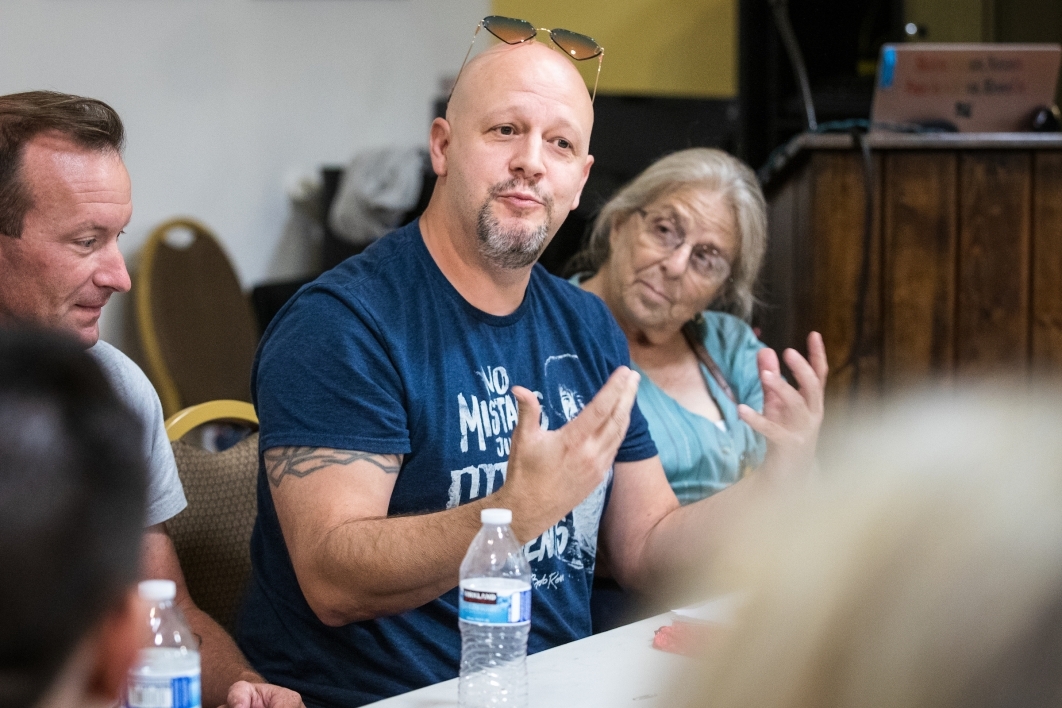 Community members were surprised that the Satanic Temple of Arizona, which has 55 official members and about 600 affiliate members throughout the state, doesn't sacrifice humans or animals, isn't demon possessed and doesn't worship Satan.

“We are nontheistic. We do not believe in the supernatural. We do not believe there is a God or Satan. We are also a religion,” said Karl Kasarda, a temple spokesperson who traveled from Tucson to attend the event. “Part of our belief system does incorporate activism, and that activism is insuring and encouraging the plurality of equity and separation of church and state.”

Kasarda said he believes we live in a Judeo-Christian dominated world, especially in the United States.

"Satan to us is the ultimate adversary to irresponsible power," Kasarda said. "We actually believe in something and we're not just believing in nothing. Atheism is typically about not believing in a god. Satanism brings us together as having the fundamental tenets in a form of compassion of community, and having a belief system that's striving together towards something other than just not believing in God."

Phoenix resident Pratibha Somaiya said for decades the Hare Krishnas have been equally maligned and misunderstood. She attended the Wednesday event to introduce people to what she calls a very “simple religion.”

“People tend to think of Hare Krishnas as people who dress in funny clothes and chant in the streets, that we listen to George Harrison music and are bald-headed devotees at the airport trying to give you a book,” Somaiya said with a small laugh. “It’s open to everyone, and it understands the Western ethos to make it easy to understand our philosophy, culture, practices and discipline … It’s not a cult, it’s a way of life.”

Nancy Davis, a member of the Sacred Spiral Pagan Church of Arizona, came to set the record straight on pagans, though she is quick to mention high priests, full-moon rituals and spells. That said, she said pagans don’t sacrifice animals, cast spells to hurt people or make things fly.

Davis added she believes in a divine entity that takes the form of a god and a goddess. Sometimes they could be one and the same; other times they could be separate, she said. David said many misconceptions about her religion come from Hollywood, a force she finds hard to fight.

“It depends on which TV show you watch,” Davis said. “It could either be ‘The Craft’ or ‘Charmed.’ Unlike those shows, I still haven’t figured out how to change the color of my hair other than when I go and pay 150 bucks to a hairstylist.”

Founder and president of the Ashe Ministry, William Q. Ross, came to Wednesday’s event to represent Santería, an Afro-American religion started in Africa and constructed in Cuba more than 500 years ago. Like paganism, Ross said Hollywood has stereotyped Santería as a religion focused on animal sacrifices, worshipping spirits that are anti-God, and attempting to do harm to others.

“It is a belief that there is one creator that has many emissaries to facilitate the messages and energies of the world to human beings,” Ross said. “Humans are just another creation, but we’re a creation that desires tangibility above anything else and are always asking for more.”

Ross added that most people have the impression that people like him who practice other religions are only interested in recruiting or defending their faith.

Luke Douglas, executive director of the Human Society of Greater Phoenix, also wanted to cast his sails for secular humanists, which boasts a membership of about 300 in the Valley of the Sun.

“Humanism is about building communities and fostering critical thought to ask, ‘How can we build full and educated lives?’ We have a lot of social issues we have to achieve,” said Douglas, who said the society is an offshoot of the Unitarian Church and was established in the 1930s. “We are specifically not religious, but it does not preclude sharing communities with anyone on the interfaith spectrum. We have members who are Buddhist, Jewish, Christian and other faiths … We don’t have religion in the traditional sense, but we can do good without a god.”

Like others, Douglas said secular humanists often deal with stereotypes from others who don’t understand them.

“I’ve heard things like we’re angry, particularly if you use the label ‘atheist’ or ‘nonbeliever.’ Or that our members have been hurt by traditional religion or the church and we’re trying to get back at them,” Douglas said. “You really have to sit down with each individual member to find out, and not necessarily take it as a negative thing.”

ASU first-year student Katie Smith, who is a microbiology major, said she came to the Project Humanities event to learn about other religions and belief systems.

“I know a lot about the major religions, but I didn’t know much about other worldviews,” said Smith, who is a member of ASU’s Secular Student Alliance. “Usually you hear about the people who practice these religions, but you don’t personally see who they are. I’ve learned a lot. I thought that satanists actually believed in Satan, but they don’t. I feel like they have the same goals as me in regard to separation of church and state.”

Askia Stewart is a member of the African Methodist Episcopal Church and was one of the few Christians in attendance. He said he wasn’t offended by anything that anyone said, and the time spent with others was valuable.

“I found there were a lot of intersections between the different worldviews, a lot more than I had expected when coming into this place,” said Stewart, who graduated from ASU in 2018 with a degree in global management. “How often do we get the chance to just talk? I don’t think most of us will proactively put ourselves in that situation because it’s uncomfortable. Tonight was a good practice of doing so.”

Rachel Sondgeroth, the communications and outreach coordinator for Project Humanities, counts that as a victory.

“Tonight, was about having a dialogue, not a debate,” said Sondgeroth. “If people walk away not angry, that’s a win.”

Top photo: Some of the more than 100 people attending listen closely to a discussion on Hinduism and Hare Krishna at the Project Humanities discussion, "Dispelling the Myths: Heretics, Pagans, Atheists and Polytheist," at the Humanist Society of Greater Phoenix in Mesa, on Wednesday, Sept. 18. Photo by Charlie Leight/ASU Now

Arizona State University and the Massachusetts Institute of Technology are pleased to announce the joint appointment of Maysa Jalbout as visiting scholar and special adviser on the United Nations Sustainable Development Goals. The announcement is made in advance of the 74th U.N. General Assembly in New York where world leaders and international organizations will gather to discuss global issues, i...

As visiting scholar and special adviser on the U.N. Sustainable Development Goals, Jalbout will advise leadership on educational initiatives for vulnerable populations

Arizona State University and the Massachusetts Institute of Technology are pleased to announce the joint appointment of Maysa Jalbout as visiting scholar and special adviser on the United Nations Sustainable Development Goals. The announcement is made in advance of the 74th U.N. General Assembly in New York where world leaders and international organizations will gather to discuss global issues, including progress on the SDGs.

As a global leader with a deep commitment and expertise in supporting the most vulnerable people in the world in multiple sectors, Jalbout will work with the leadership of ASU and MIT to channel their talent, resources and technology toward thoughtful and deliberate SDG strategies, initiatives and partnerships. 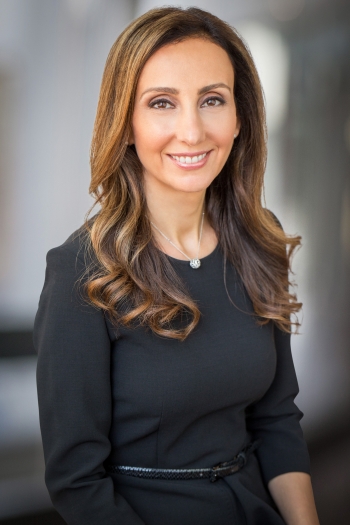 Maysa Jalbout's top priority will be to develop concrete ways in which to serve the education needs of displaced populations worldwide, underserved and disadvantaged communities, and under-skilled and underemployed youth. Download Full Image

Jalbout’s top priority will be to develop concrete ways in which to serve the education needs of displaced populations worldwide, underserved and disadvantaged communities, and under-skilled and underemployed youth. Jalbout will cast a wide net of potential partners including governments, the private sector, foundations and civil society organizations.

“I am thrilled at the chance to work alongside the incredible talent of two of the world’s most innovative universities. It is an opportunity to think, learn and experiment in ways very few positions offer,” said Jalbout. “I believe that universities can solve some of the greatest global challenges of our time, and that ASU and MIT are leading the way.”

“Maysa is a unique leader who has been able to work effectively across multiple cultures, organizations and continents to drive successful educational outcomes,” said ASU President Michael M. Crow. “We’re looking forward to her strategic counsel on ways that ASU and MIT can further collaborate to meet our mutual goals of transformative impact and contributing to the U.N. SDGs.”

“Making a better world through education is at the core of the mission of MIT. We are continuously searching for new meaningful ideas, approaches and tools. We are delighted to welcome Maysa and look forward to collaborating with ASU”, said Professor Sanjay Sarma, vice president for open learning at MIT.

Jalbout has more than 25 years of experience advocating for the rights of vulnerable populations, advising global leaders, building organizations and partnerships, and exploring the use of human-centered technology to address development challenges. She is a nonresident fellow at the Brookings Institution and serves on the boards Generation and the International Baccalaureate Organization. She founded the Abdulla Al Ghurair Foundation for Education and the Queen Rania Foundation and headed the government of Canada’s education policy in developing countries.