Saving oceans from the sky

Until recently, if you wanted to make a map of a coral reef, you had a lot of options, all of them bad. That’s changing, thanks to a pair of recent additions to Arizona State University’s faculty.

Greg Asner opened ASU’s Center for Global Discovery and Conservation Science in January, joined by his wife and research partner Robin Martin, a biochemist and remote-sensing expert who has opened her own lab at the center and is an associate professor at the School of Geographical Sciences and Urban Planning. 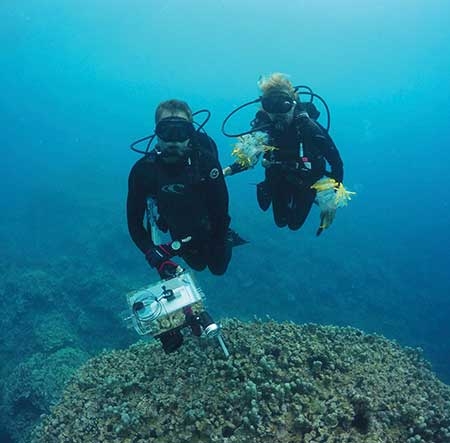 Greg Asner and Robin Martin have transformed the understanding of coral reefs. Photo by Chris Balzotti

Under Asner’s leadership as principal investigator, and with contributions from ecologists, data scientists and global information systems experts, the pair is creating the most detailed maps of coral reefs ever devised, using a unique suite of advanced technologies mounted on board a Dornier 228 turboprop aircraft, dubbed the Global Airborne Observatory, and artificial intelligence on the ground.

But the research is not academic. “We want to advance the pace at which we discover what’s going on out there, then apply it immediately.”

Asner and Martin moved to ASU from the Washington, D.C.-based Carnegie Institution for Science, an independent research organization with labs at Stanford University. The change reflects Asner’s stated objective. “It was the desire to scale up fast and generate a beehive of activity using the latest science and technology to find conservation solutions that are going to work,” he said. “ASU has a campus of startups. We’ve been given the keys to this startup.”

The two have been working on coral reefs for only five years, but they are already well known in the marine biology community. Nancy Knowlton, Sant Chair for Marine Science at the Smithsonian Institution, describes Asner as “very visionary, with a genuine skill set — a combination not a lot of people have. These mapping techniques would really transform our ability to understand what’s happening (to coral reefs) essentially in real time over the entire globe, and nothing like that’s been possible before.”

Seeing the forest in the seas

If you could tell from a map whether the corals are alive, dead, or starting a process that could lead to their death, or in some instances, the species of coral, you would have some very valuable information: 25% of sea life relies on the less than 1% of the ocean floor that is composed of coral reefs. Such sea life is an important source of protein for up to a billion people, and reefs provide the global economy $375 billion annually in the form of food, coastal protection and tourism.

Some reefs are worth $1 million per square kilometer per year. Yet humans are killing reefs — overdeveloping their coastlines, dumping sewage onto them, pulling off chunks for jewelry or souvenirs, upsetting their ecological balance with overfishing and acidifying their waters with carbon emissions.

Limited access adds to the challenge. Reefs are known to about 50% accuracy — that is, a reef we think covers 100 acres might actually cover anywhere from 50–150. This is like saying we don’t know where forests are.

They spent two decades mapping tropical forests to maximize the services those ecosystems provide various stakeholders, from governments to orangutans. Eventually they realized that the tools developed to map tropical forests could be applied to coral reefs. With thousands of hours of scuba diving under their weight belts, they also have a deep affinity for the undersea world.

“In the forest, once we got to scale and saw patterns, then we could say something bigger,” Martin said. “And the reefs community needed that.”

As with the forests work, the first step in mapping reefs is collecting samples from the water. Back in the lab, Martin measures the concentrations of different chemicals in the corals; these vary by species, and change depending on the health of the coral. These data are organized phylogenetically so relationships between species are understood.

Different coral species give off data on the spectrum of light, as well. “Using statistical models,” Martin explains, “we model the chemistry in the leaves to the spectra. That allows us to remotely sense the chemistry.”

That is, from the Global Airborne Observatory. It combines five instruments that are fully fused: a high-powered, twin-laser lidar — like radar except with light instead of radio waves — that pings the ground beneath 500,000 times per second to provide 3D topography of the seafloor; two spectrometers, which measure 427 colors, most of them outside the range of visible light, to pick up the spectra that Martin has matched to the chemistry; and two cameras with up to 6-centimeter resolution that solve the spatial part of the problem, and are used to interpret the spectral data.

Images are analyzed using a form of artificial intelligence known as “deep learning” to find corals and determine whether they are alive, dead or bleached — a process that results from warm-water events, which are increasing in frequency and severity as a result of global warming. It’s the same approach Google Photos uses to identify faces.

In July, Asner and his GDCS colleagues elsewhere published a paper showing a method for measuring the seafloor in shallow waters using only satellite imagery — “game-changing” Asner said on Twitter, because now they can map the depth of coastal oceans and reefs at higher resolution than previously possible. The analogy to forests would be that this new technique shows the heights of every part of a forest, while the finer-grain imagery collected from the observatory can identify the condition and sometimes the species of the trees in that forest. The new method is significant because the seafloor is always covered by water and hence difficult to see with satellites. Now they can map the rough topography of the seafloor remotely with images that are easily acquired. The observatory’s suite of technologies provides information that is immediately actionable for conservation goals.

Asner is working with Planet Labs — the satellite imagery company that provided the images analyzed with the new technique — to develop a system to identify at the earliest stages where a bleaching event might occur so interventions can be planned.

“There are things we can do to arrest or slow coral loss, but they must be used at exactly the right time and place,” said Andrew Zolli, who heads Planet’s global impact initiatives.

“Greg’s goal is not just to publish another paper, but to translate his discoveries into actionable insights,” Zolli said.

That’s already happening. Asner’s team contributes to the Allen Coral Atlas, an effort to map coral reefs worldwide and create a monitoring system that would track restoration progress. In what Lauren Kickham, senior director at Vulcan Inc., which coordinates the project, describes as “reverse Photoshopping,” Asner’s team corrects satellite images from Planet to strip away various effects to give “as true a picture as we can get of corals.”

Meanwhile, in the Caribbean, the observatory has flown over an area hit hard by back-to-back hurricanes the previous summer. The maps they created have already been used to help design the largest marine protected area in the Dominican Republic.

“By having a high-resolution map of the corals and the sea bottom, (planners) were able to include critical areas,” said Luis Solorzano, executive director for the Caribbean at The Nature Conservancy, a Washington, D.C.-based nonprofit that organized the project. “We hope this information will be used by other countries to improve their design and management of marine protected areas.”

The group operates coral “nurseries” and anticipates leveraging the observatory to see if corals grown in the nurseries and seeded on damaged reefs are growing successfully. Asner’s team could also compare reefs before and after warming events to discover which genotypes are more resilient to warmer waters. 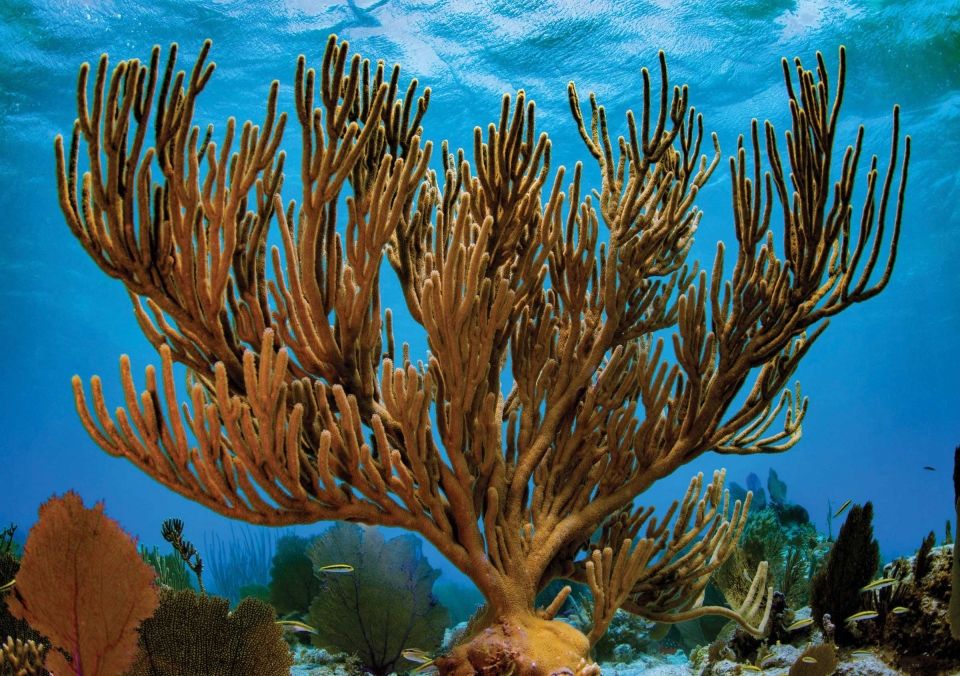 Reefs such as the Lighthouse Atoll in Belize make up less than 1% of the ocean floor, but support 25% of sea life. Photo by Jiwei Li

It’s a direction ASU President Michael M. Crow is happy to see. He describes the traditional academic approach as “rigid, siloed thinking” that has contributed to the side with all the facts in its corner losing the debate on climate change. His leadership has aimed to create instead a culture that’s “about the understanding and the solution, not about the protection of the discipline.” Crow sees Asner fitting into that: “Greg is a fantastic scientist with fantastic tools to help us understand and manage ecosystems we’re not doing well by.”

Asner’s team is battling a vicious climate cycle. Coral reefs protect shorelines from the storms that are getting stronger as a result of greenhouse gas emissions damaging those same coral reefs. Solorzano envisions marine bio-engineering projects to bolster reefs as a shield for coastal communities such as Miami, where he lives.

“In the same way we lay down huge highways, we can be rebuilding reefs using science,” he said. “Putting in materials to make them higher, reducing the energy of waves, facilitating the growth of (carbon-sequestering) mangroves — their value is so huge.”

With the right maps, this would be possible.

Written by Paul Tullis, who has covered science, business, technology and the environment for The New York Times and National Geographic. He wrote about Greg Asner in the June 10, 2019, edition of The New York Times: “To Map a Coral Reef, Peel Back the Seawater.” This story originally appeared in the fall 2019 issue of ASU Thrive magazine.

ASU to be Featured on HBO Sports' 24/7 College Football

ASU to be Featured on HBO Sports' 24/7 College Football