Recently selected for funding from the National Science Foundation, research could have wide range of benefits

Earth is enormous, and while humans have done a decent job of being able to map out the boundaries of countries and states, the roads in our cities and the location of geological sightseeing destinations, there remains a lot of the world that isn’t precisely figured out. But a new project from Wenwen Li, associate professor in the School of Geographical Sciences and Urban Planning, aims to learn more about our world and its varying terrain by applying artificial intelligence.

Artificial intelligence, or AI, has already made an indelible impact in daily life. From knowing our commutes or being able to suggest new shoes, what we divulge about ourselves and our habits has created a framework of information as it reveals hidden patterns in how we conduct our lives. The same can be true for our natural world as AI can help to reveal the patterns we haven’t yet discovered. 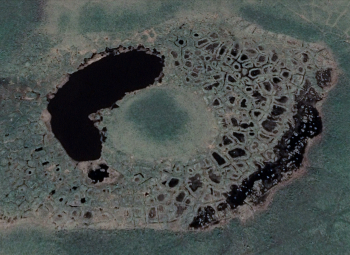 A melting pingo (a dome-shaped mound consisting of a layer of soil over a large core of ice, occurring in permafrost areas) with surrounding ice wedge polygons near Tuktoyaktuk, Canada, as seen here via Google Earth. ASU Associate Professor Wenwen Li's research aims to use Terrain AI to map the extent of changes to landforms, such as a melting pingo, associated with melting permafrost and Arctic change. Download Full Image

“Today, geospatial data, such as remote sensing imagery, streaming data from internet of things devices, GPS traces from mobile sensors are proliferating. These rapidly exploding data pose significant challenges for traditional analytical tools which were designed in handling 'small' and 'good' data. GeoAI sheds a light on providing a novel data-driven, theory-free way to mine and discover hidden patterns and knowledge from these data.”

The potential for GeoAI could have wide-ranging impact and applications due to how it incorporates machine intelligence and data-driven approaches for geospatial problem solving. Accurate detection and analysis of terrain on a large scale will not only allow us to know more about the changing landscape, but could also provide an important resource for climate change detection and provide detailed information allowing for safer and more efficient search-and-rescue operations.

Specifically, Li’s work in developing a deep learning model, named TerrainAI — a specified form of GeoAI — will investigate novel ways to inject key spatial principles into the machine learning process for more intelligent and automated extraction of spatial patterns and knowledge from multisource remote sensing data. The TerrainAI model is not limited to the study of landforms but is generalizable and applicable to a wide range of computer vision tasks, and therefore has an even greater potential for a major impact in both geography and computer science.

This is Li's fourth project to receive funding from the National Science Foundation.

The importance of Li’s project, “GeoAI for Terrain Analysis: A Deep-Learning Approach for Landform Feature Detection,” was solidified recently when it was selected for funding through the National Science Foundation.

“This is my fourth NSF award as principal investigator, but the first one after I became a mom,” said Li.

“It has been a challenging three years of doing research and teaching while raising a young family. Getting this award is a great encouragement — it makes me increasingly enjoy the joint of life of the mind and joy of motherhood. ”

Li is collaborating on this project with Samantha Arundel from the U.S. Geological Survey. The science advisory committee for the project includes Ronald Dorn, Ian Walker and Mark Schmeeckle, all professors in the School of Geographical Sciences and Urban Planning.

Engineering outreach across borders: From one to many, de uno a muchos

Victoria Serrano realized at an early age that education would be the key to a bright future. Growing up in David, Panama, she watched how her mother struggled to raise her and her sister without a college degree. She knew she wanted to pursue higher education — but her journey at Arizona State University inspired her to make an impact beyond her own success.As an electrical engineering graduat... 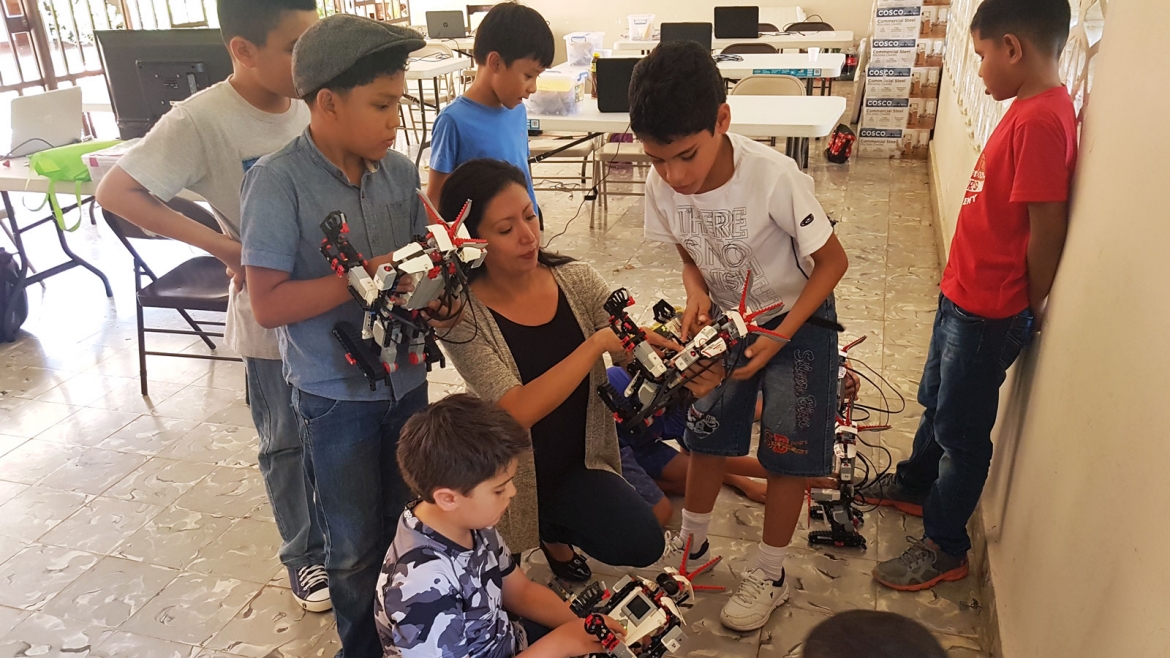 Engineering outreach across borders: From one to many, de uno a muchos

Victoria Serrano realized at an early age that education would be the key to a bright future. Growing up in David, Panama, she watched how her mother struggled to raise her and her sister without a college degree. She knew she wanted to pursue higher education — but her journey at Arizona State University inspired her to make an impact beyond her own success.

As an electrical engineering graduate student in the Ira A. Fulton Schools of Engineering at ASU, Serrano learned the importance of giving back through her involvement in student organization outreach activities.

Now she works as a full-time faculty member at the Universidad Tecnológica de Panamá, where she earned her bachelor’s degree in electrical engineering. Her outreach experiences have stayed with her, and now she spends her time introducing young people to engineering whenever she’s not teaching undergraduate classes or conducting interdisciplinary research.

Serrano’s extensive efforts to bring science, technology, engineering and math education to school-age kids will be recognized with the Institute of Electrical and Electronics Engineers' 2019 Meritorious Achievement Award in Outreach and Informal Education in November. The award honors IEEE members who take the time to teach STEM skills outside a classroom setting.

“It requires a lot of work and a lot of time to prepare everything, but having somebody recognize this effort, this sacrifice we make, is very rewarding,” Serrano said.

Discovering the delight of engineering outreach

Serrano got her first taste of how valuable outreach is when she joined the ASU chapter of the Society of Hispanic Professional Engineers (SHPE) and the Mechanical-Autonomous Vehicles, or MAV club, in which she served as outreach director and vice president.

MAV club adviser and Professor Armando Rodriguez was a big influence on Serrano getting involved in outreach. Serrano related to Rodriguez’s story of having a difficult childhood and using that as motivation to pursue education despite adversity. Rodriguez’s subsequent success and influence as a faculty member inspired her.

“If you really want kids to get a better education in their future, you should get involved in outreach,” Serrano said.

The MAV club brought K-12 students onto the ASU Tempe campus on the weekends to learn mathematical concepts and design mechanical birds.

With SHPE, Serrano visited Phoenix-area schools to lead activities with students and talk to parents about how to prepare their kids for college.

“You can see how they change their minds,” Serrano said. “At the beginning, they didn’t know what engineering was. But after a few sessions, some of them wanted to pursue an engineering degree in the future.”

She also wanted to teach other engineering concepts by showing students how to program robots to move around obstacles.

“I loved seeing the kids when they were learning something new,” Serrano said. “That’s very fascinating because you can actually see it in their faces, how happy they get.” 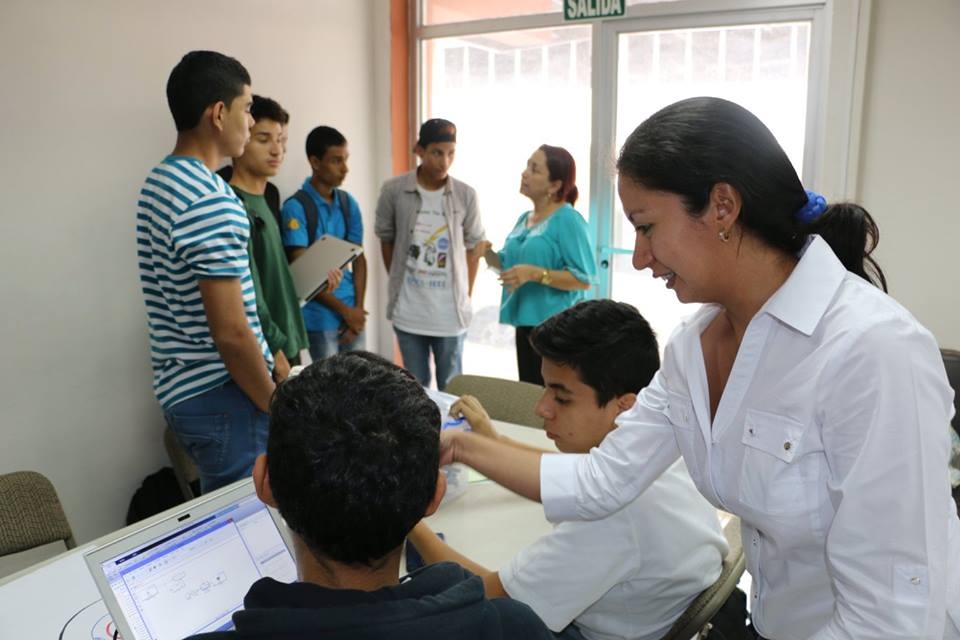 Victoria Serrano is a full-time electrical engineering faculty member at Universidad Tecnológica de Panamá, but she also takes time to conduct outreach out in the community of David, Panama. Photo courtesy of Victoria Serrano

“It was super engaging and interactive, which had the students asking so many questions and wanting to learn more,” Parker said. “She was great at meeting students at their level and connecting with them.”

Serrano also participated in the Engineering Projects in Community Service program, known as EPICS, which usually tasks students with working on a solution to a community service project. But Serrano proposed her own project instead: STEM Beyond the Borders, which had the support of EPICS in IEEE and the IEEE Control Systems Society Outreach Fund.

As part of the project, she took time off from her studies in Tempe to spent two weeks in her hometown of David, Panama, teaching high school students.

She drew from her MAV club experience and the help of fellow students at ASU to design an engineering curriculum. The students used MATLAB and Simulink computer programming tools to control robots to avoid obstacles.

“We wanted to show them that engineering is a path, a promising path in many senses, not only because it’s fun,” Serrano said. “They can solve problems for the community, and it’s also a well-paid career.”

“They reached out to the community to see what their needs were, built programming around that and, in doing so, ‘increased individual success through personalized learning pathways,’” said Parker, quoting ASU’s mission. “Not only did they do this in Arizona, but Victoria took her passion and commitment to students to Panama.”

Practicing what she preaches in Panama

Serrano jumped right into conducting more outreach activities with schoolchildren when she returned home to Panama after graduation in 2016. Wherever young people were — public markets, churches or schools — she conducted STEM learning programs.

“I realized how (outreach) was changing the lives of many high school students, and I really wanted to do this back home and I’m still doing it,” Serrano said. “I could also see that many technologies and things that I learned in the U.S., many students (in Panama) wouldn’t get the opportunity to get exposed to. So that’s another reason I feel so motivated (to do outreach).”

To help expand her outreach activities, Serrano created the CIATEC mobile center. The acronym comes from an abbreviation of the Spanish words for science (ciencia), art (arte) and technology (tecnología). The CIATEC mobile center provides STEM-related programs to children and teenagers in the community. 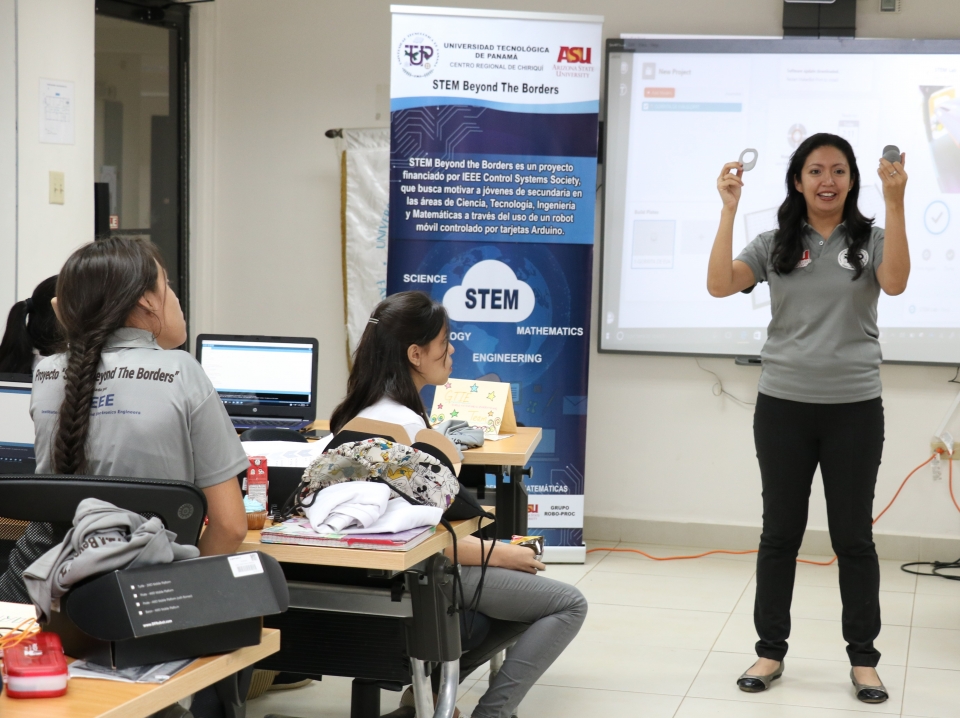 Victoria Serrano teaches young students engineering concepts through an Engineering Projects in Community Service, or EPICS, project she oversees called STEM Beyond the Borders. The project started while she was a graduate student at ASU, and she has continued it in Panama as a faculty member at the Universidad Tecnológica de Panamá. Photo courtesy of Victoria Serrano

“When alumni engage younger students, they bring another dimension to outreach — true life experience, knowledge, skills needed, new trends happening and a different level of mentorship,” Parker said. “It really is so beneficial for younger students to have role models from college students through professionals in their careers.”

While she spends a considerable amount of time introducing engineering concepts to kids preparing for college, Serrano is also making strides to empower college students to conduct research. She’s inspired by the support she received from her ASU doctoral research adviser, Professor Konstantinos Tsakalis.

“We have a research competition every year at my university, and I always advise groups of students who want to work on research projects,” Serrano said.

“This year I have served as a committee member of EPICS in IEEE,” Serrano said. “I have been able to give feedback to proposals, and I am trying to promote the program not only in Panama, but also in other regions.”

“When you’re willing to make a positive change in the community,” Serrano said, “there will always be people ready to join you.”

Top photo: ASU alumna Victoria Serrano conducts outreach activities in Panama with LEGO MINDSTORMS robotic kits to introduce children to the possibilities of engineering. Her outreach work earned her the Institute of Electrical and Electronics Engineers' 2019 Meritorious Achievement Award in Outreach and Informal Education, which honors IEEE members who teach STEM skills outside the classroom. Photo courtesy of Victoria Serrano