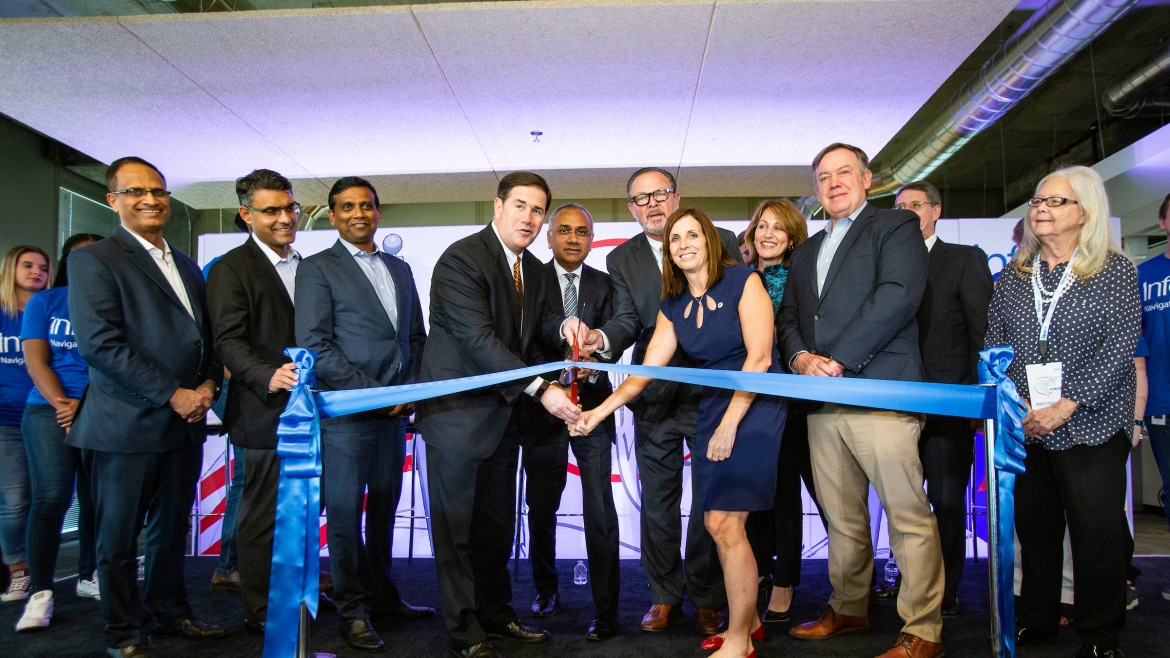 The digital platform consulting company will create 1,000 jobs across disciplines

With a snip of the scissors on Friday, Arizona State University sealed a partnership with the global corporation Infosys that will accelerate workforce development in the state and create 1,000 jobs.

Infosys, a consulting company that creates digital platforms, cut the ribbon on its new Technology and Innovation Center in the SkySong ASU Scottsdale Innovation Center. This marks the sixth U.S. hub for Infosys, which has hired 10,000 American workers in the past two years.

Next year, Infosys will move from SkySong to its permanent site in the Novus Innovation Corridor, a 350-acre public-private partnership that will eventually include nearly 10 million square feet of office space, apartments, retail and an athletics village, all on ASU land. Infosys will have a 60,000-square-foot facility at Novus.

Also on Friday, Infosys announced a partnership with InStrideInStride is a global learning services firm that works with employers to provide opportunities for their employees to earn degrees and credentials through the highest-quality universities. InStride was founded in partnership with ASU. that will allow its employees to complete degree programs and continuing education courses through ASU.

Ravi Kumar, president of Infosys, said that Arizona was an appealing choice for its new hub because of the state’s economy and proximity to clients, but also because of ASU.

“There was the academic ecosystem and availability of a large pool of talent that we will nurture and build through our hubs,” he said.

“As we go through this journey we believe STEMAn acronym for science, technology engineering and math. skills are very important but we will actually be looking for skills in liberal arts and skills in design. We’ve already started hiring them.”

ASU President Michael Crow said that ASU’s partnership with Infosys is exciting because the company harnesses technology to solve problems and empower creativity. 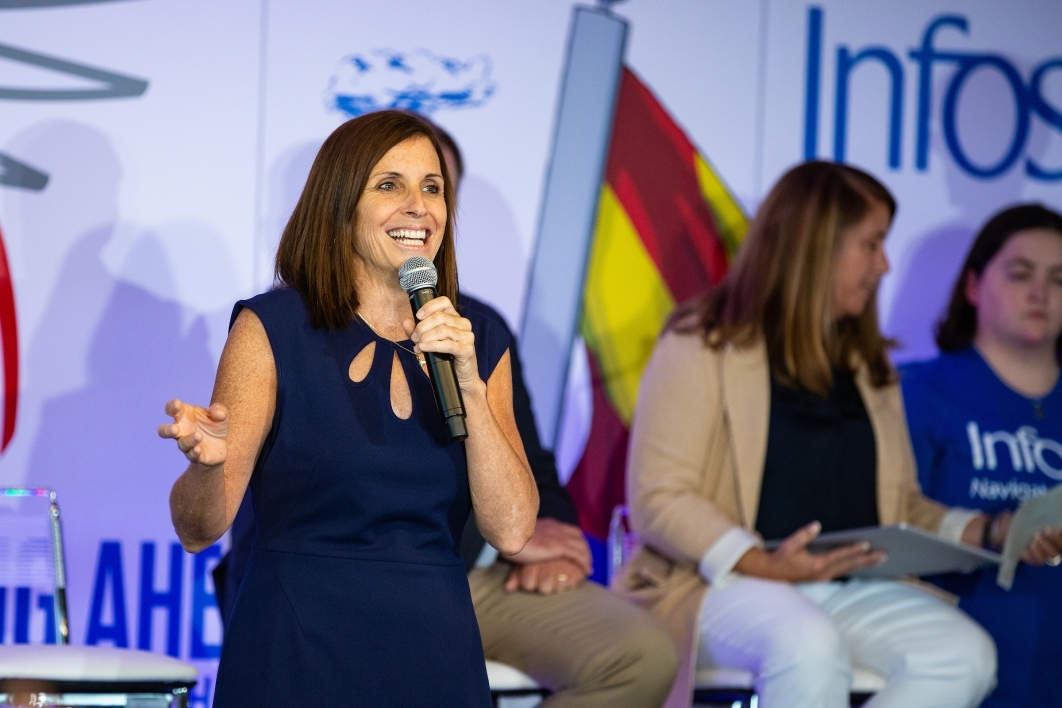 Sen. Martha McSally: “It’s our job in Washington, D.C., to set the conditions, with overall tax and regulation policy, so the economy can thrive and these partnerships can exist." 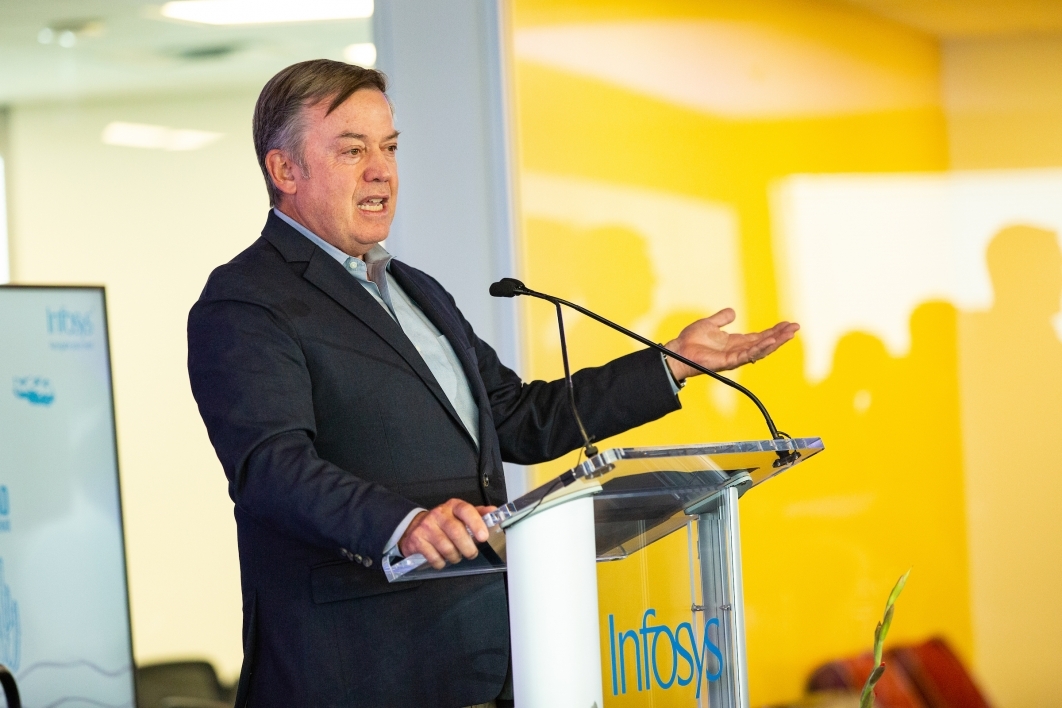 ASU President Michael Crow speaks to the assembled guests about the future of the workforce at the Infosys event at SkySong. 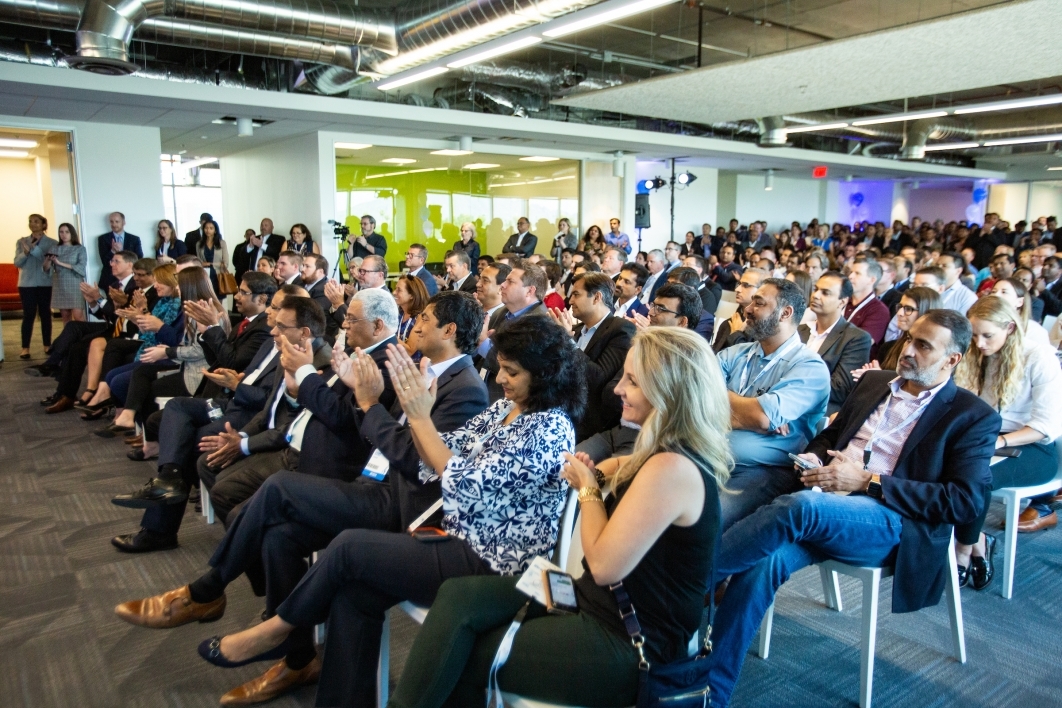 The house was packed for the ribbon-cutting on the ASU-Infosys partnership on Friday, Sept. 13. 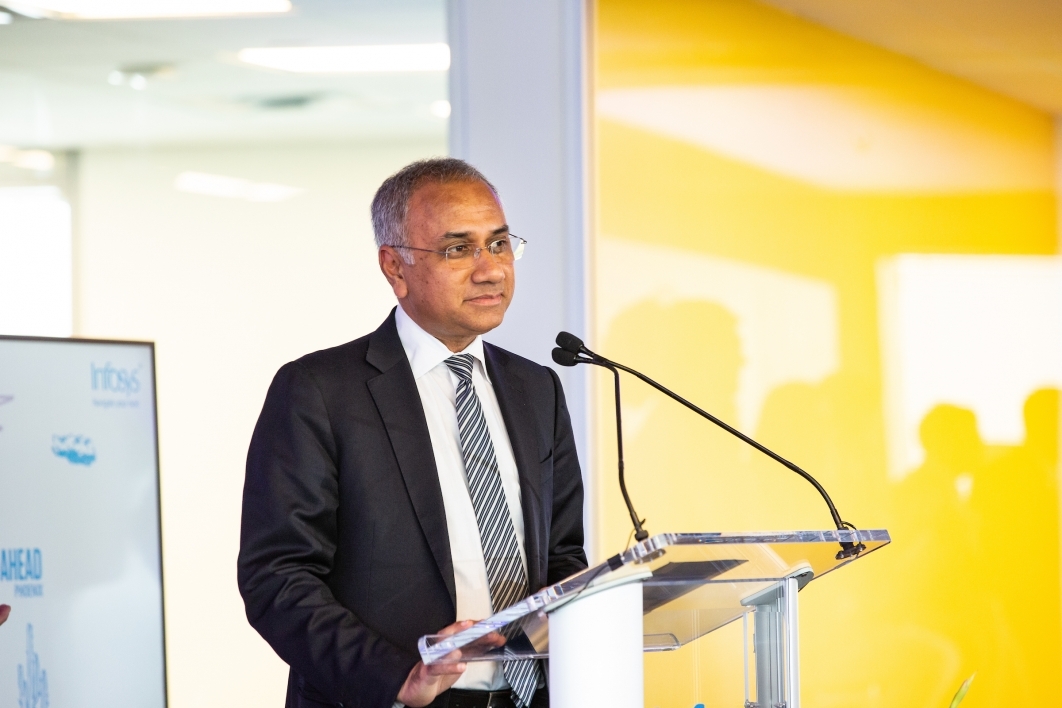 Infosys CEO Salil Parekh addresses the audience during the inauguration of the Infosys Technology and Innovation Center. “You won’t be able to create what you want to create as a person until these machines are capable of doing the things you don’t want to do so you can focus all of your energy as a human,” he said.

Earlier Friday, Crow addressed a technology conference held by Infosys in Phoenix and acknowledged that technology graduates are in high demand, but said that many technology companies are asking for philosophy graduates.

“If you forget human capital and you think you only need coders and they only need to know coding, you’re not very smart,” he said.

“Because they will not be able to adapt quickly enough to the changing markets and opportunities.”

Gov. Doug Ducey attended the event at SkySong, saying that from 2014 to 2018, technology jobs in Arizona increased by 15%.

At the conference earlier on Friday, Ducey said that companies like Infosys are driving the state’s economy.

“Over the last several years, Arizona has seen some of the most exciting companies in the world start up, grow or expand in our state, Infosys included.”

U.S. Sen. Martha McSally also spoke at the SkySong event, and drew laughter when she said: “The federal government had absolutely nothing to do with this.”

She said that it’s the job of the federal government to create an environment that fosters this type of innovation.

“It’s our job in Washington, D.C., to set the conditions, with overall tax and regulation policy, so the economy can thrive and these partnerships can exist and so Gov. Ducey can recruit Infosys and work in partnership with Dr. Crow and ASU to provide a thousand jobs, and hopefully more over time, to Arizonans.”

Kumar said Infosys is committed to growing a workforce in Arizona, and to help close the technology skills gap, will create an apprenticeship model for community college students to learn skills and transition to a university degree program.

“I believe this will be a national experiment that will be anchored here,” he said.

Top photo: Infosys, ASU and state leaders cut the ribbon during the inauguration of the Infosys Technology and Innovation Center at the new SkySong 5 building in Scottsdale, Arizona, on Friday, Sept, 13. Infosys — a company focused on harnessing, modeling and scaling a new model for workforce development in the United States — will be working closely with ASU to develop the talent needed to meet its plans to hire 1,000 workers in Arizona over the next five years. Photo by Deanna Dent/ASU Now

SAN DIEGO – Arizona State's second outing on the cross country course was just as successful as its first as the Sun Devils went on to win both the women's 6K and men's 8K team titles Friday in San Diego. ... SAN DIEGO – Arizona State's second outing on the cross country course was just as successful as its first as the Sun Devils went on to win both the women's 6K and men's 8K team titles Friday in San Diego.