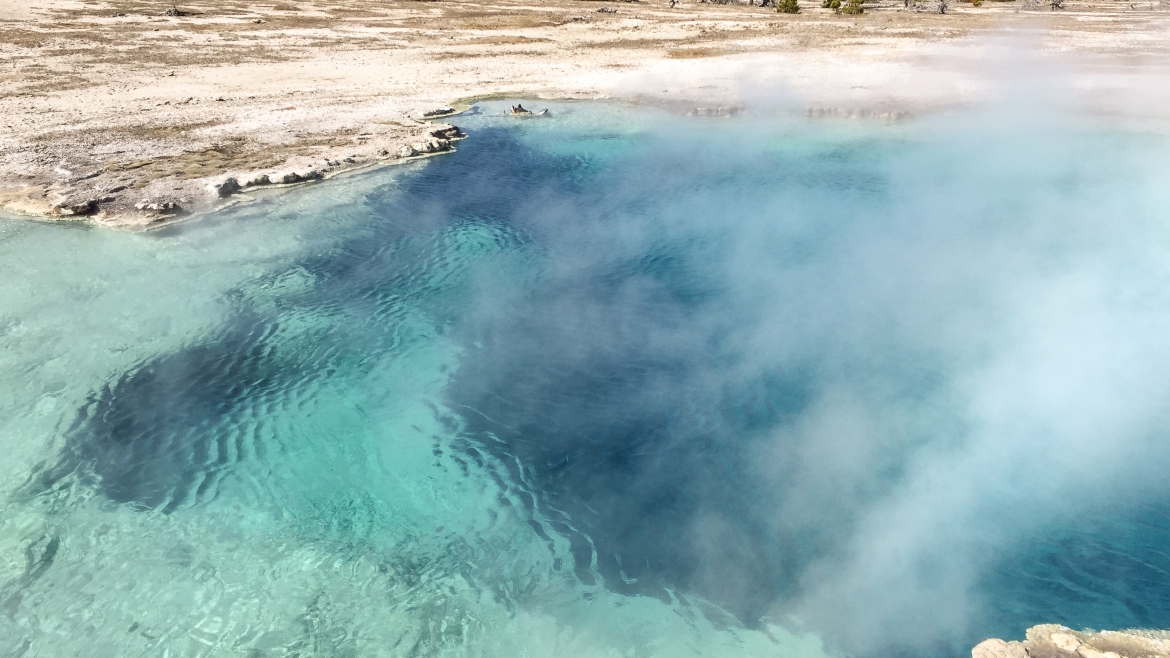 Searching for the methods of alien life in a national park

How Yellowstone hot springs reveal a glimpse of other worlds

Among Jupiter’s 79 moons, Europa jumps out at planetary scientists. Covered in an ice crust, it has the smoothest surface of any object in the solar system. Spacecraft have detected water vapor plumes wafting from the Jovian moon. Scientists estimate an ice crust 62 miles thick covers a subsurface ocean.

Down there, at the bottom of that ocean, may be the first place we find life off Earth.

If we do, Everett Shock will recognize it right away.

The Arizona State University environmental biogeochemist spent the past summer peering down into the depths of the Pacific Ocean and Yellowstone National Park hot springs. In both places he studied chemical energy sources and the microorganisms that live off them.

NASA has planned a mission to Europa to fly sometime in the next decade. Plenty of planetary scientists are more excited about Europa than Mars. Shock is involved with the mission.

Most of Earth’s volcanoes are underwater, in the oceans. Put a volcano in an ocean and you’re going to get some hot water. It’s an energy supply being delivered by a normal geologic process.

“It's like, yeah, this is normal,” Shock said. “That's how our planet works.”

We only have one data point of a planet with life. (You’re on it right now.) We know organisms used chemical energy sources before they figured out how to use sunlight.

“So, based on our one data point, you're placing a bet,” Shock said. “How does it work on another planet? OK, maybe it also starts with chemical energy. … So that's a really exciting mission.”

Shock is a professor in the School of Life Sciences with joint appointments in the School of Molecular Sciences and the School of Earth and Space Exploration. He has been conducting research at the Yellowstone hot springs for 20 years now. He travels up with 10 students. They camp in the tourist campground, because it’s cheap and convenient and fun, but they follow a carefully planned research program.

They don’t think that Yellowstone is the early Earth or that it’s Europa. They go there to understand how these chemical energy sources become available.

On the Gorda Ridge expedition almost two miles below the Pacific, Shock studied sea vents which feed tiny organisms. (He was in a control room, studying instruments' readouts and live video images.)

Hot water escaped the vents and mixed with chilly ocean water. Elements mix, providing energy sources that microorganisms tap into. And it all happens in the dark.

It's quite similar to the Pacific seabed, but not because it's dark. The hot spring is sitting out in the sunlight, but photosynthetic organisms are not there. So once again, you can study a system that has chemical energy sources supporting it. There's life there: microorganisms, bacteria, archaea, those sorts of things. They’re eating sulfur.

At the big picture level, many of the same chemical energy sources exist. If you go down into the details, the life at the bottom of the ocean and the hot springs are really different. But, in both cases the planet is supplying chemical energy and microorganisms are taking advantage.

Research permit in hand, Shock and his group head to Yellowstone, where they take samples and make some measurements which have to be done in the field, like temperature. They sample sediments, because that’s usually where the microorganisms are. Their water sample kit has eight different little bottles in it, each one destined for a different type of analysis. The biological sample has at least that many smaller vials.

It's a coordinated effort. There's one person who's in charge of making the basic measurements of pH and temperature and so forth and keeping records of all those as somebody else is making the chemical measurements that need to be done in the field. Another person is just trying to get that dissolved gas sample. Another person's doing the water sampling and the fifth person in this group is doing the biological sampling.

They do things in a certain order to minimize pain and suffering. (You don’t want to take water sample after the sediment guy has stirred up a mess, for instance.) Every day there is a whole plan of where they’re going and which hot springs they’ll be sampling and why that is. That's a couple of weeks of field work.

“Yellowstone is always dealing me a new hand,” Shock said. “I’m definitely never bored. … Even the places I've been before, they change a little or they change a lot and I can now stand in an area where I've been there many times and remember what it was like and how it is now and then, ‘Oh wow, this part has really changed.’ So there's an advantage to having been to the same places many times.”

First-year student Ashley Stills is on a mission to serve mothers and their newborns in local and international communities. To better equip herself for this work, she is beginning an online global health program with Arizona State University's School of Human Evolution and Social Change this fall.Stills currently works as a midwife for Amish communities in Indiana. Midwives care for women and th...

Founding a nonprofit in Haiti and serving rural communities at home is just the beginning, she says

First-year student Ashley Stills is on a mission to serve mothers and their newborns in local and international communities. To better equip herself for this work, she is beginning an online global health program with Arizona State University's School of Human Evolution and Social Change this fall.

Stills currently works as a midwife for Amish communities in Indiana. Midwives care for women and their newborn babies before and during pregnancy, at birth and after delivery. According to the World Health Organization, they bring a host of benefits, including fewer diseases among mothers and infants and fewer interventions in labor. However, around 20% of live births worldwide are still not assisted by a skilled attendant. 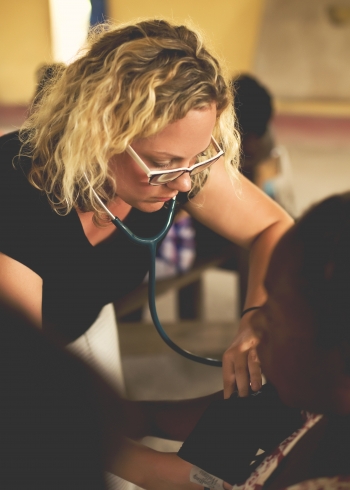 Though her stateside work was rewarding, Stills saw the chance to do more, and in July 2014, she founded Breath of Life Haiti, a nonprofit that provides midwifery and educational services.

“Breath of Life Haiti has a holistic approach to serving the community and implementing programs; understanding a whole person is intimately interconnected physically, mentally, socially and spiritually,” she said.

Stills answered questions about her work, this newest challenge of pursuing an undergrad degree in global health and her future goals.

Answers edited for length and clarity.

Question: What made you decide to join the online global health program?

Answer: I researched various universities that would be able to accommodate my unique schedule of being a wife, mom, nonprofit leader for an international organization and a midwife with an on-call schedule. After thorough research, I believe ASU is going to be a good fit for my busy lifestyle.

Q: How did you get interested in studying global health?

A: Through my passion to serve women and families internationally. As the founder and director of a nonprofit organization, I recognize the importance of understanding cross-cultural behaviors and dynamics of medical care systems and facilities.

Q: How long have you been a midwife? What do you find rewarding about it?

A: I recently graduated from midwifery school. For a majority of my clinical placement, I served a high volume of clients within the plains population. Indiana has the third largest Amish population. Residing in Northern Indiana, I plan to continue serving the Anabaptist as well as women and families in Haiti.

Midwifery is a demanding profession. However, it is very rewarding. Life is precious. When a woman chooses me to be her provider, we enter a partnership. It is always an honor to be entrusted with providing care while empowering women to make informed decisions regarding their care.

Q: What challenges do you see in providing mother and infant care in Haiti, and how is your nonprofit organization helping with those challenges?

A: With a population of over 10 million, Haiti is the poorest country in the Western Hemisphere. Due to geographic remoteness and socioeconomic status, many mothers in Haiti do not receive the care they require. In fact, only about 25% of births in Haiti are attended by a skilled provider.

As a result, Haiti is the most dangerous country in the Western Hemisphere to give birth. Most of maternal deaths there are caused by eclampsia, sepsis and postpartum hemorrhage — in other words, are preventable. Haiti also has the highest rates of infant and under-5 mortality in the Western Hemisphere. Children who have lost their mothers are up to 10 times more likely to die prematurely than those who have not.

Today, Breath of Life Haiti serves hundreds of people each year in the community of Dèsarmes, Haiti, providing midwifery care and programs with a vision of education and empowerment. Our vision is to breathe life into individuals, families and community through opportunity, education, midwifery care and the love of Christ. We currently employ 23 Haitian community members: a program director, midwives, birth assistants, adult education teachers, primary school teachers and cooks.

Over the past three years, we have provided midwifery care to over 450 families; 32 individuals have graduated from the Level 1 adult education program (reading, writing, math); and 68 adults have completed the business training program. We also provide education and school lunches to 150 children each year at the primary school. Currently, our midwives provide midwifery care to approximately 170 women and babies a year.

Q: What are your future goals?

A: My goal is to continue empowering women and families within my community as well as internationally. Someday I would like to be involved in international policies for maternal and child health in Haiti and other countries. I am hoping that the field of global health will help me address the unique challenges with international populations.