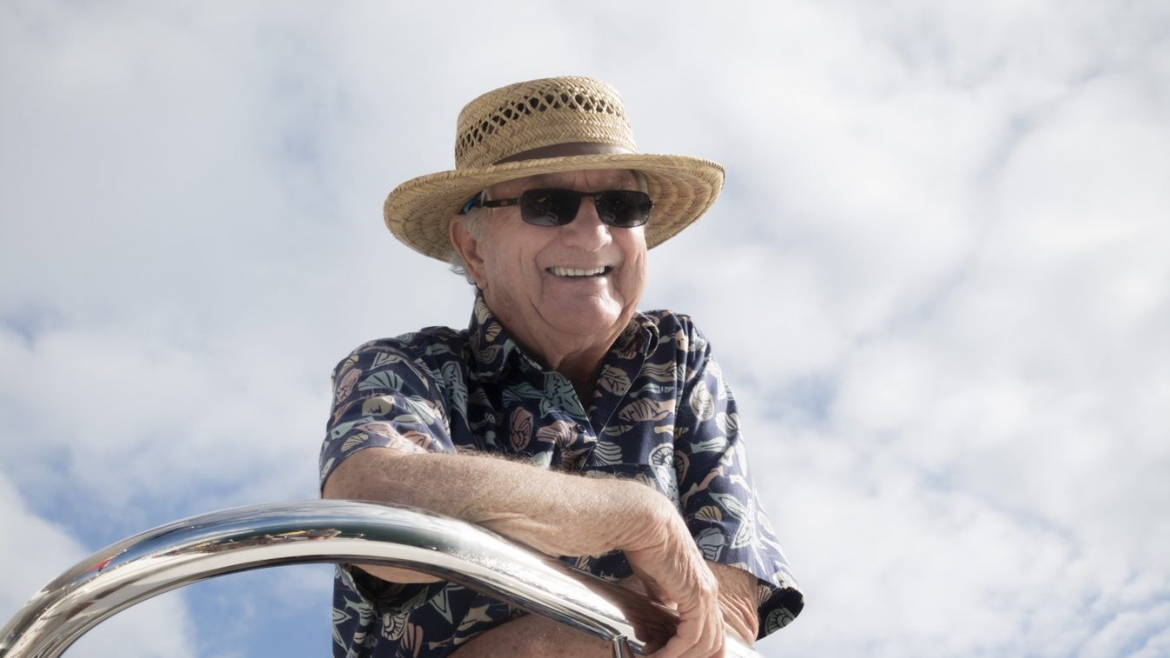 Gifts from Edson and his wife have increased opportunities for student entrepreneurship, health education and dementia research

J. Orin Edson built his first boat when he was just a kid boating around Lake Washington.

After a stint in the Army during the Korean War, Edson pursued his boating interest in his garage and started a small company that he eventually built up into Bayliner Marine Corp. Four decades later, he sold the largest manufacturer of luxury boats.

Edson died Aug. 27 at the age of 87, but his name and legacy live on at Arizona State University.

Edson — who developed a luxury boat company on his desire, talent and keen entrepreneurial sense — made a gift to ASU to help future generations of students do the same thing. In 2005, Edson gave ASU $5.4 million to create the Edson Student Entrepreneur Initiative.

The gift formed an endowment that gives ASU students the opportunity to pursue their creative and business goals by providing seed money to help them along in their entrepreneurial quests. The awards are for any type of business — ranging from high-tech for-profit startups to nonprofit public-sector ventures. The endowed initiative was designed to spur innovative thought and entrepreneurial spirit in ASU students by providing them the means to pursue their business ideas.

“Orin Edson represented the quintessential entrepreneur, a man who applied his talent, creativity and intellectual curiosity to his life’s passion and became a leader in every sense of the word,” said ASU President Michael M. Crow. “Orin embraced the challenges and fulfillment in entrepreneurship and philanthropy and through his gifts — both tangible and intangible — empowered ASU students and researchers to bring their game-changing visions to life. Sybil and I will miss his friendship.”

The gift geared toward entrepreneurship was just the beginning of his generosity to ASU. Edson and his wife, Charlene, made a $50 million gift that was announced in March and split evenly among two programs with a focus on health care. The gift renamed the Edson College of Nursing and Health Innovation and established The Grace Center for Innovation in Nursing Education (named for Charlene’s mother, who was a nurse) to enhance education and training for nurses and caregivers. The other half of the gift benefited the Biodesign Institute for research on causes and cures of dementia, as well as tools to manage the disease.

Sybil Francis, president and CEO of the Center for the Future of Arizona and standing co-chair and co-founder of the ASU Foundation's Women & Philanthropy, worked closely with the Edsons. She and husband Crow have known the Edsons for more than 15 years.

“Orin was a wonderful friend to me and to Michael, and we will miss him very much,” Francis said. “We were honored by the trust and confidence he placed in us and by his belief in the mission and impact of Arizona State University. Along with his wife, Charlene, his inspired and generous gift to ASU is transforming the university’s impact in carrying out its commitment to caring for the communities it serves.”

The research and education made possible by the Edsons' gifts to ASU will help others for generations to come.

“The generosity of Orin Edson not only helped students pursue their dreams, but also advanced ASU by providing real-world experiences to our students,” said ASU Foundation CEO Gretchen Buhlig. “Orin’s contributions to our university were indispensable and will be remembered for years to come. In all, the Edsons have donated more than $65 million to ASU.”

Edson is survived by his wife and two sons.

Serving abroad for the Peace Corps. Pledging money to sponsor clean drinking water in developing countries. Working an election booth to ensure fairness.All of these are prime examples of showing humanity. Unfortunately, there is no shared language to define human rights.A new civic engagement awareness campaign launched by the McCain Institute for International Leadership in Washington, D.C., ho... 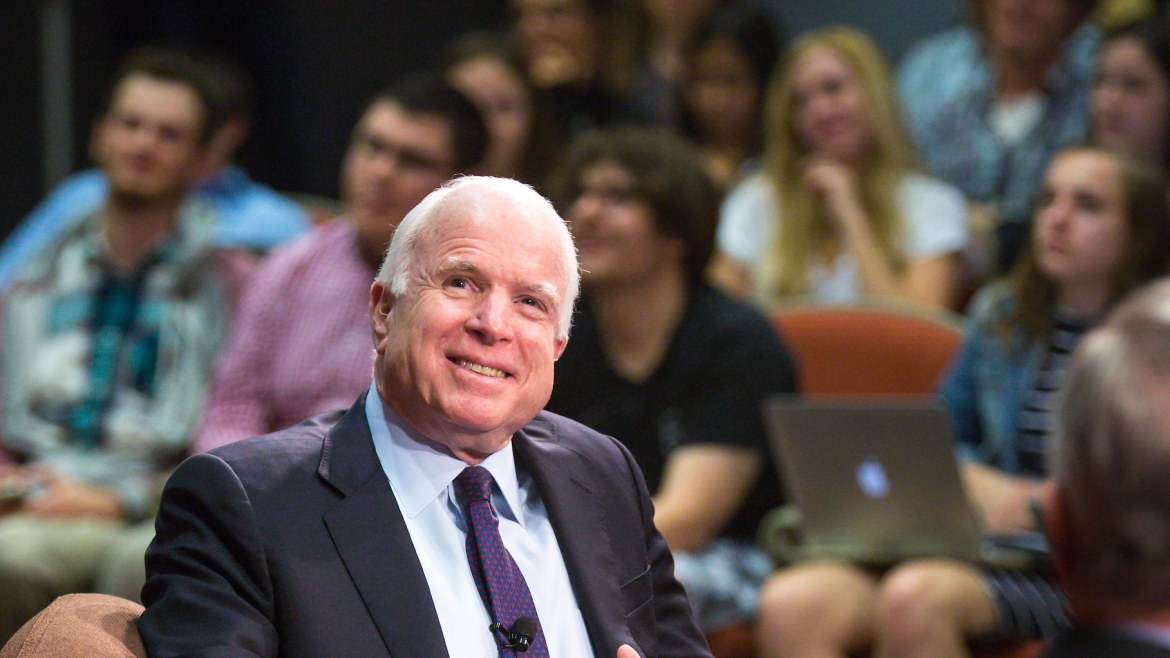 All of these are prime examples of showing humanity. Unfortunately, there is no shared language to define human rights.

A new civic engagement awareness campaign launched by the McCain Institute for International Leadership in Washington, D.C., hopes to reintroduce the concept of human rights to younger generations and motivate them to advocate at home and abroad.

“Our democracy was founded on the belief that each individual has rights — and with those rights come responsibilities,” said Paul E. Fagan, director of Human Rights and Democracy Programs for the McCain Institute. “Today, it can seem easier to disengage and to be divided by our differences than to get in the arena and stand up for our shared humanity and to serve causes greater than self. ‘We Hold These Truths’ honors the legacy of Sen. John McCain by challenging us to take responsibility for our rights and for the rights of others.”

“We Hold These Truths” is a nonpartisan interactive campaign timed to the first anniversary of McCain’s death on Aug. 25, 2018. The campaign specifically targets young Americans who are interested in progress, safety and freedom. The institute hopes to educate and galvanize the public to explore and engage — through the lens of the First Amendment — in human rights in a meaningful way that’s relevant and resonant to their own experiences, and then act to protect and preserve rights for others across the country and globe.

From sharing digital content or writing a letter to creating a video or co-hosting civic discussions, the McCain Institute says there are many ways to be of greater service in defending human rights around the world.

Putting its money where its mouth is, the McCain Institute is planning on launching university ambassador groups, mentoring groups, civic dialogues at town halls and other liberty-centric events. They have also created a citizen engagement platform and Facebook page for the new initiative.

“The institute, partner organizations and supportive individuals working together to secure the understanding and practice of human rights the country and world sorely needs, it doesn’t get more McCain-like or noble than that,” said Ambassador Kurt Volker, executive director of the McCain Institute.

The campaign honors and builds on McCain’s legacy, who dedicated his life to bringing ideas of dignity and civility into the everyday lives of American people. He believed in the United States’ role as a fighter and champion of liberty, and that the country is safer and more prosperous when freedom is afforded to all.

Research shows many Americans want to engage in human rights but don’t know where to begin, or what human rights really are. The McCain Institute’s research illuminated that there is no shared language to define the issue, and people from all political backgrounds are exhausted by divisiveness. The public wants to know its rights and how to care for them.

This is where the initiative believes it can help.

“We Hold These Truths” seeks to raise the profile of human rights to be a central issue across parties in the 2020 elections.

Arizona State University has historically demonstrated humanity, civility and kindness through its programming, outreach and various initiatives, including the Immigration Clinic housed in the Sandra Day O’Connor College of Law since 2006.

The clinic seeks to address the current vacuum of immigration services in Arizona. It does so by collaborating with nonprofits, government agencies, other ASU departments, community advocates and funders to identify and develop projects that address Arizona’s immigration challenges, including supplying legal help for immigrant families.

“Arizona residents need lawyers that understand immigration law because immigration does not just impact immigration cases, it impacts family, criminal, labor, trade, estate planning and many other fields of the law,” said Evelyn Cruz, founder and director of the clinic. “Besides, access to justice, a critical human right, necessitates access to lawyers that are prepared to help all segments of society.”

ASU’s Project Humanities, a multiple award-winning initiative, is continually finding ways to bring people together by talking, listening and connecting at community events, workshops and lectures.

“Civility and human rights are fundamental to one's own or to another's humanity,” said Neal A. Lester, professor of English and director of Project Humanities. “Our Humanity 101 commitment to promoting kindness, respect, compassion, forgiveness, empathy, integrity and self-reflection certainly aligns with this new initiative. Together, our individual and collective efforts toward a greater social good have to challenge us all to do better and to be better.”

In 2018, ASU’s School of Civic and Economic Thought and Leadership launched “Polarization and Civil Disagreement: Confronting America’s Civic Crisis,” a lecture series that encourages civility and “civic friendship” through dialogue and differing opinions — a calling card of John McCain’s life and work.

“Hearty thanks to the McCain Institute for calling Americans to understand and live up to our highest ideals, because restoring an ethic of civil disagreement among free people has to begin with basic civic education,” said Paul Carrese, director of the School of Civic and Economic Thought and Leadership. “Reminding us of the Declaration of Independence and its truths about equal natural rights for all — the distinctive ideal that America has strived to fully realize, admittedly imperfectly, for nearly 250 years — is a perfect way to get to work, not least because the declaration itself arose from vigorous disagreement and debate.”

Carrese also noted that John McCain certainly lived out the final commitment of the signers, in the declaration’s closing words, to back up “these truths” by pledging “our lives, our fortunes and our sacred honor.”

Top photo: Sen. John McCain watches a video history of himself as part of his Iconic Voices series at the Cronkite School of Journalism and Mass Communication on Feb. 19, 2016. Photo by Charlie Leight/ASU Now