A new model of political attitudes

How are people’s political beliefs organized, and what leads them to subscribe to certain beliefs?

Answering these kinds of questions has often been the domain of political scientists, but psychologists have also sought to explain people’s political attitudes, with a focus on the influence of variables like personality and values. 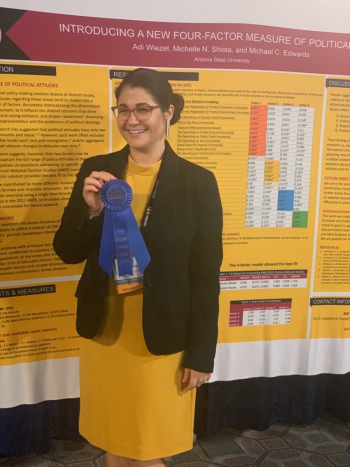 Political beliefs are often summarized using a single spectrum, with liberalism on the left and conservatism on the right. Most people fall somewhere in this range.

But according to recent psychological research, this idea might be too simplistic.

Arizona State University psychology graduate student Adi Wiezel was recently awarded the 2019 Association for Psychological Science Student Research Award for her research on political ideology, or the relationship among people’s attitudes about specific political issues. Wiezel, who studies political psychology as well as the general emotional, motivational and social mechanisms of attitude change, was one of four recipients of the award.

Historically, political ideology research has emphasized a one-dimensional spectrum ranging from conservativism to liberalism. More recently, some researchers who study political attitudes have shifted to differentiating between attitudes regarding social versus economic policy issues. This allows researchers to make further distinctions in ideology, especially among people who are neither extreme liberals nor extreme conservatives. For example, using these two factors, someone who is conservative on economic issues such as tax reform but liberal on social issues such as abortion and gay marriage might be classified as a Libertarian. However, this two-factor structure excludes a number of specific issues such as foreign policy and trade.

Wiezel wanted to find out what would happen when she looked at interrelationships among more issues than just those that concern sociomoral issues and the economy. She began developing a new inventory that measures attitudes about almost 30 specific political issues, based on work she did previously using data from the American National Election Studies — a national survey conducted every presidential election cycle. Questions on the inventory covered social and economic issues such as abortion and aid to the poor, but also included issues like foreign imports, immigration rates, the death penalty and the torture of terrorists.

“We know that certain voting behaviors are made on the basis of certain issues, and we wanted to know how people grouped those issues,” said Wiezel, who has a master’s degree in political science and psychology.

Wiezel and her colleagues surveyed Americans online using a breakdown similar to the partisan divides in the 2016 presidential election: 35% Democrat, 29% Republican and 36% Other.

Data analyses suggested four distinguishable factors, or groups of specific policy issues, in the new inventory. These factors differentiate how Americans think about the roles of government in terms of:

Wiezel’s findings suggest there may be benefits to considering more than just economic and social dimensions of how people think about politics.

“The existence of these distinctions in political attitudes is important because they could help us better understand the kinds of categories people use to consider policy issues, and could help us think about political representation more broadly,” Wiezel said.

The current political climate is divisive, and understanding the nuances that contribute to political beliefs could help bridge the gap.

“The findings from Adi’s work can push us to ask more sophisticated questions about people’s political attitudes,” Shiota said. “Researchers have often focused on explaining overall conservative versus liberal political orientation in terms of traits such as intelligence, open-mindedness, conscientiousness and desire for power over others. Asking what predicts each specific cluster of attitudes uncovered by this research is less polarizing, less conducive to 'us versus them' thinking. I’m excited to see where the research goes from here!”

Wiezel and her collaborators are collecting more data to examine how these four factors relate to personality and what motivates individual people.