The members of the Desert WAVE robotics team from Arizona State University's Polytechnic campus are returning to school this month as the best-performing underwater autonomous robotics team in the country. In their rookie season, the all-female team placed third only to China and Russia in the RoboSub competition in San Diego in August. 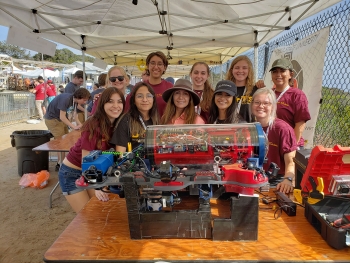 The 11-member team was launched last fall through a partnership between ASU and the Si Se Puede Foundation to encourage more diversity in engineering fields. According to the Society of Women Engineers, only 7.9 percent of college women major in engineering, math, statistics or computer science; and 32 percent of women switch out of STEM (science, technology, engineering and math) degree programs in college. And only 13 percent of engineers are women. Their mentors believe that ASU’s team is only the second all-woman team in the world; the first is Texas A&M.

In two short semesters, the students of Desert WAVE (Women in Autonomous Vehicle Engineering) gained invaluable hands-on experience in how to design and build a robot, wire it and program it to perform tasks that simulate real-world military and environmental applications.

And they proved that, 10 months later, they’re already world-class engineers.

Jessica Dirks, a sophomore double-majoring in robotics and human systems engineering, is a founding member of the team. She helped design and build the competition robot during what she described as a serious spring build season; sometimes she’d walk into a team meeting and the robot would have wires hanging out everywhere. But the team worked hard around class and job schedules to make steady progress through the summer on the robot and on their own skills.

“Six months ago, I didn’t know how to solder,” said Dirks, who started by designing parts for the robot with computer-aided design software.

“So there were a few times I went in and they taught me how to solder, which really boosted my confidence levels. And it was amazing to go in and see so many different women working on skills none of us had before and coming out so much stronger for it.” 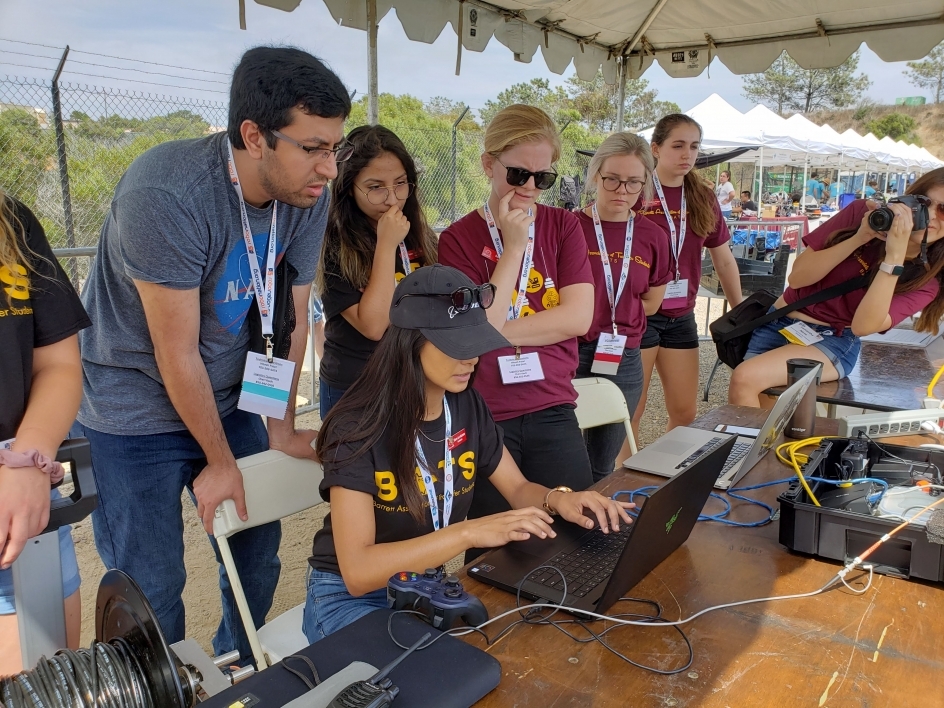 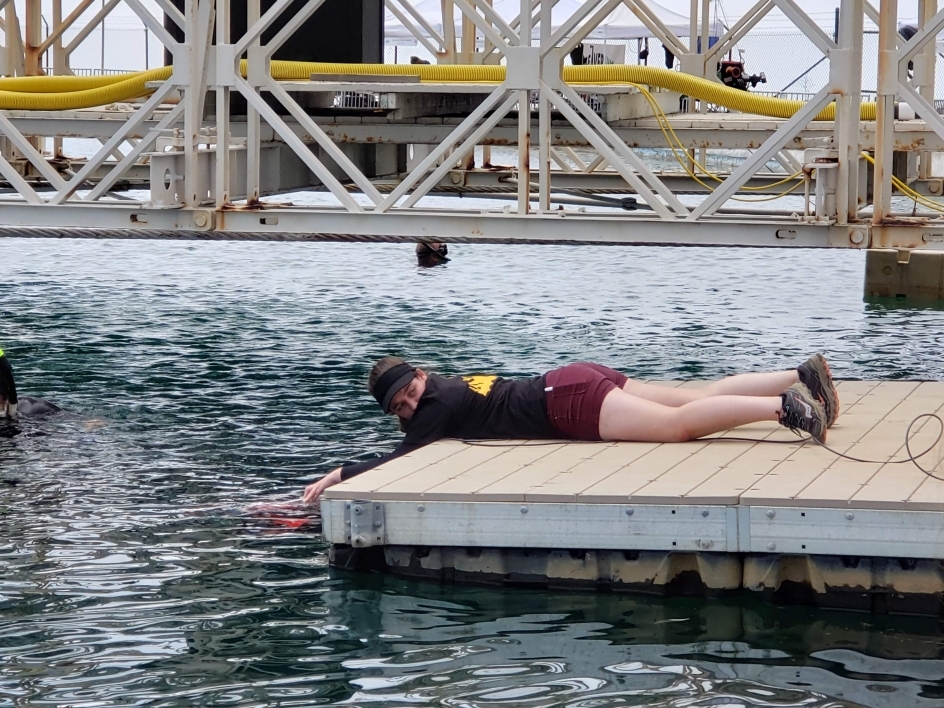 For the competition, which wrapped up Aug. 4 at the San Diego Naval Base, ASU faced 54 teams from around the globe. Their robot, which they named Phoenix because it “rose from the ashes,” Dirks said, was built from components that were donated to them from Carl Hayden High School’s Falcon Robotics team.

The WAVE team is mentored by ASU engineering Lecturer Daniel Frank and Faridodin “Fredi” Lajvardi, who is the vice president of STEM initiatives for the Si Se Puede Foundation. Lajvardi is also a retired high school science teacher who coached Falcon Robotics when they famously beat MIT and other college teams in the 2004 Marine Advanced Technology Education Robotics Competition.

The resurrected Phoenix robot had barely been in the water before the competition, where it had to compete for days on end in a 16-foot-deep testing pool that mimics being out in the ocean. The team prequalified for semifinals by sending in a video showing that Phoenix could pass through an underwater gate and back.

So when the team showed up in San Diego, it was the first time they could truly test out their months of engineering, electrical and programming work — open bodies of water being hard to come by in the desert. After posting an impressive first run, their confidence soared. Phoenix not only worked, but the sub was quick.

“Phoenix was so fast that the divers who follow the subs underwater said we were the only ones who gave them a workout,” Dirks said.

Phoenix earned the team points for passing through gates, dropping items into targets, finding path markers, surfacing in a designated area and doing turns for added style points that the programmers wrote code for on the fly. The tasks mimic ongoing research in autonomous underwater engineering.

Desert WAVE members said the hustle was all part of the fun and camaraderie of the tournament. When they were running out of pinballs to use for marker droppers in the final rounds — divers couldn’t find the balls on the pool’s murky bottom — members of the University of Florida team helped replenish the ASU team’s supply (Desert WAVE members added their own flair, neon shoelaces, to make sure the balls were visible and retrievable in the sediment on the bottom of the pool).

Desert WAVE team president and mechanical engineering systems sophomore Whitney Foster said she was surprised to find so much collaboration and support at such a competitive event.

“It was really moving. … If someone needed super glue or they needed a certain screw, you would give it to them if you had it. You don’t want to see people fail — you want to see them succeed. It was heartwarming to see that in a competition,” she said.

“There was that moment where all the breath rushes out of you and you realize that you achieved so much more than you thought you could do. … The entire place erupted in applause. They were so excited, and everybody was with us along the journey,” Dirks said.

Andrea Schoonover, a software engineering sophomore, joined the team in January after transferring from North Carolina last fall. She loved digging into the programming that made the robot “go” and said she’s thrilled that their hard work paid off.

“I think some of us are still reeling trying to understand what this means for us and the program,” she said. “Now I feel the weight of it.”

The impact of this kind of pipeline building in engineering will be obvious in the new face of the field. And the cumulative effect is stronger because of other partnership efforts with Si Se Puede, such as the National Underwater Robotics Challenge that is hosted on the ASU Polytechnic campus and the ASU Latino Partnership Scholars program, which awards scholarships to deserving ASU students and prioritizes students studying STEM fields.

“The Si Se Puede Foundation is proud of the partnership it has established with Arizona State University in the creation of Desert WAVE,” said Alberto Esparza, president and CEO of the foundation.

“These young women have paved the way for girls to consider careers in the STEM fields. The stereotype that engineering is a playground for men has changed. They have shown a Si Se Puede attitude and are the role models of today.”

Duane Roen, vice provost at ASU’s Polytechnic campus, said it’s part of his job to be a cheerleader for great student efforts, and the robotics team makes that job easy.

“Desert WAVE has done remarkably well on the world stage. Their strong technical and innovation skills are complemented by their mental toughness — what a powerful combination,” he said.

“They exemplify what makes Sun Devil students stand out. They know how to set aspirational goals that encourage them to perform at the highest levels. They have the skills, knowledge, persistence and resilience to achieve their goals. Even though they perform at a level way beyond their years, they are modest about their achievements. They are leaders. They are role models for all of us. They are wonderful ambassadors for ASU.”

In addition to taking home the bragging rights and a $3,000 prize, the team members also brought home something invaluable: connections and inspiration. Their experience on Desert WAVE has influenced all of their career paths.

Foster entered college planning to work on planes or rockets like her grandfather, who worked for Boeing. She’s now hoping to pursue working on submarines and autonomous vehicles. Schoonover knew she was going into computer science and might end up working on satellites. Now she wants to move into the autonomous side of space exploration. And Dirks said she came into college loving psychology, and now she enjoys working with robots and loves the idea that engineering projects can change the world.

“I’m super excited about going and talking to young women and saying, 'Hey, you can do this too,' and just knowing that there’s other paths for girls out there now,” Dirks said.

After their win, the Desert WAVE team is already back at work preparing for the 2020 competition. Next year the team hopes to compete with more robots and perhaps in other kinds of robotics competitions. The team might try to work in machine learning to help the robot “see” underwater rather than relying heavily on waypoints. Overall, Foster said, it’s just about fulfilling their potential.

“We want to be the best competitors we can be,” Foster said.

“We are first in the country. We want to be first place in the world,” Schoonover said.

The new season also brings a new Mona Plummer Aquatic Center, as the off season brought a newly renovated deck and brand-new record board. ... The new season also brings a new Mona Plummer Aquatic Center, as the off season brought a newly renovated deck and brand-new record board.