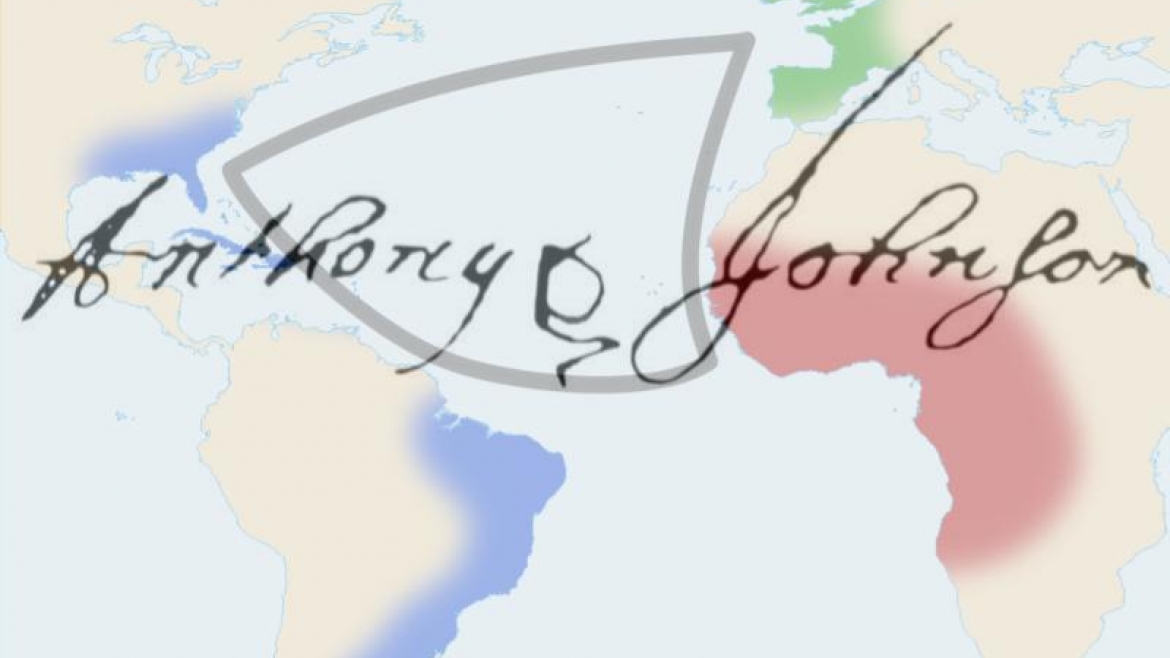 The impossible story of an African pioneer in colonial America

Anthony Johnson arrived in Virginia in 1621Source: "1619: Virginia's First Africans" (Hampton History Museum, www.HamptonHistoryMuseum.org/1619), various sources. He farmed other people’s land in the new English colony before he acquired land of his own and wealth. He married Mary, had children — two daughters and two sons — and passed on his own property to his heirs before his death in 1670.

In the romanticized belief in hard work, values and upward mobility, Anthony Johnson’s life could have been the definition of the American dream.

Anthony Johnson was born in AngolaSource: Virginia Humanities, “Site of 17th Century Estate of Anthony and Mary Johnson,” AfroVirginia, http://afrovirginia.org/items/show/388, various sources, a west coast country in south central Africa almost 7,000 miles from the coast of Virginia. He is believed to have arrived in the English settlement by ship under the name “Antonio” but not of his own volition. Johnson was one of millions of people of African descent forcibly brought to the Americas and enslaved for almost 250 years in the United States. His harrowing journey through the Middle PassageThe Middle Passage refers to the stage of the triangular Atlantic slave trade in which millions of enslaved Africans were forcibly packed onto ships and transported to the Americas as human cargo. Many died during the passage. Their bodies were thrown into the Atlantic Ocean. and traumatic transitions to survive cruelty and hardship in a foreign land was not unlike the experiences of many others. “This is the beginning of African America in English America,” said Calvin Schermerhorn, a scholar of African American studies in the School of Historical, Philosophical and Religious Studies at Arizona State University. “It is very much a part of our national story to know that the people who arrived in Virginia did not arrive in a position to build a city upon a hill. They arrived and were immediately exploited and put to unpaid labor. So to have an achievement story like Anthony Johnson’s emerge from this period is remarkable and merits more reflection on the narratives that compose our history.”

Although Anthony Johnson is recorded as having arrived in Virginia in 1621, Schermerhorn and other historians believe he had likely seen the colonial peninsula before — in August 1619, around the date marked for this year’s 400-year commemoration of the day “20 and odd AfricansVirginia colonist John Rolfe documented the arrival of the ship The White Lion and “20 and odd” Africans in a journal that has been cited repeatedly in academic literature and textbooks. Rolfe is also known for his marriage to Pocahontas of the Native American Powhatan tribe in Virginia.,” reportedly disembarked the English ship The White Lion at Virginia’s Old Point Comfort.

Piecing together research and literature by genealogists and fellow scholars, Schermerhorn says it is likely that Anthony and his future wife, Mary, also from Angola, were being held captive on a second English ship called The Treasurer that docked on the Virginia coastline a few days after The White Lion in 1619. Five more people of African descent were traded for supplies for The Treasurer. The remaining captives, including Anthony and Mary, were taken to Bermuda and likely labored on a tobacco estate before Anthony was shipped to Virginia for a permanent stay.

Upon his landing in Virginia in 1621, Anthony was put to work on Bennett’s Welcome, a plantation Schermerhorn describes as a fortified compound with 60-odd people, mostly indentured servants, working the land. The plantation suffered numerous casualties during the Powhatan Attack of 1622 in which Native Americans fought to remove colonists from their lands. Anthony was among a handful of survivors. Then, as fate would have it, Mary arrived at the Bennett plantation later that same year. The two married and later gained freedom. They would establish themselves in Virginia’s Northampton County in the 1640s, patenting 250 acres of land in the colonial settlement where they grew corn and tobacco and assembled a workforce of indentured laborers — and enslaved people.

“Here are people who arrived under these circumstances and did the impossible,” Schermerhorn said. “They somehow slipped the chains; rose into a property-owning class; passed on property to their children; sued their white neighbors over property and other injustices — and won.”

The Johnsons’ legal battle over a black bound worker named John Casor was among their more controversial victories. When Casor, who initially worked on Johnson’s property, left the Johnsons to work as a contracted indentured servant for Johnson’s white neighbor, Johnson sued his neighbor for Casor’s return, claiming he still “owned” Casor. The Northampton Court agreed with Johnson in a 1655 appeal ruling after initially siding with Johnson’s neighbor and Casor was ordered returned to Johnson. The ruling made John Casor the first person of African descent in Virginia to be declared a slave as the result of a civil case.

“For a time class trumped race,” said Schermerhorn, referring to Anthony and Mary Johnson’s notable standing in the community along with a handful of other African-descended people who had also managed to gain freedom and become successful property owners in their own right. Schermerhorn adds that the court could have decided against the Johnsons in the Casor case but decided that it was more important to preserve the economic system, which depended heavily on keeping people enslaved, by enforcing servitude for life against Casor.

“At that moment, it was more important that Casor was enslaved than the fact that Johnson, a man of African descent, was an enslaver,” Schermerhorn said. In making this point, Schermerhorn noted the existence of underinformed arguments of convenience that seek to either revere or blame Anthony Johnson for establishing slavery in Virginia. Schermerhorn says historical records show that African-descended people had been punished with servitude for life well before the Casor case.

“Anthony Johnson probably didn’t see himself as black or African,” Schermerhorn said. “He saw himself as Angolan and probably didn’t consider John Casor as someone in his group.” That said, Schermerhorn says there were other Angolans in the neighborhood who also owned property and may have been even more exceptional in wealth and status than Anthony and Mary Johnson. The Johnsons’ story, however, has attracted more attention than the others due in part to a number of extraordinary circumstances that played out in the courts — the Casor case being one of them and Mary and her daughters petitioning and winning tax-exempt statuses for life — a social standing reserved exclusively for white women at the time.

Where most accounts of the Johnsons’ remarkable history drops off after Anthony’s death in 1670, Schermerhorn cites research that seems to track the movements of Mary Johnson and her sons after racist practices became more common and even legitimized by the passage of several laws in Virginia.

“The family was pushed to the margins,” Schermerhorn said, citing the research of genealogist Paul HeineggPaul Heinegg's research includes the two-volume work "Free African Americans of North Carolina, Virginia, and South Carolina from the Colonial Period to about 1820." . When Anthony died, the courts seized his land in Virginia, claiming he did not leave a will and that because he was “Negro” he was alien and not eligible to own land. Johnson’s sons John and Richard had to defend themselves against the language that was also used against them in the attempts to seize the property they owned.

The family reportedly moved to Somerset County, Maryland, where Anthony had leased a plot of land before he died. Mary lived into her 90s, and bequeathed land animals to her grandchildren, according to Schermerhorn. He says further research suggests Johnson descendants also moved to Delaware and then to North Carolina, demonstrating the family’s resilience time and again in an increasingly unwelcoming society.

Research has also provoked a number of questions relative to how the trajectory of American culture and values might have been different for descendants of the Johnsons and other African-descended Americans had it not been for the deliberate and conscious decision to stratify society through race-based slavery.

“On the 400th anniversary of the arrival of the first Africans in Virginia, we have to look at the origins of the chasm of the widening racial wealth gap in present day United States,” Schermerhorn said. “The history of the Johnson family is significant in that they saw American society in its infancy. They saw the opportunities; they grasped the opportunities; they made good on the promise that we usually think of as the American Dream — pulling oneself up by the bootstraps and succeeding through perseverance and playing by the rules. They illustrate the possible.

“They also illustrate a moment after 1619 when America could have been different,” Schermerhorn added. “There is no necessary historical pathway that involves race-based slavery, yet this is what the Johnsons witnessed and endured when this system came to rob them of their property and seize what they had worked hard for.”

This, Schermerhorn says, “is part of our founding story” and one that needs to be retold regularly, beyond commemorative anniversaries and the month of February February is the month designated to observe important people and events in the history of African diaspora. It is known as Black History Month or African American History Month.“because the story of African America is — without hyphenate — American history.”

For the second year in a row, Arizona State gymnastics had 13 student-athletes earn Scholastic All-America honors from the Women's Collegiate Gymnastics Association (WCGA), as announced on Monday. ... For the second year in a row, Arizona State gymnastics had 13 student-athletes earn Scholastic All-America honors from the Women's Collegiate Gymnastics Association (WCGA), as announced on Monday.