Comparing a living cell to a virus is a bit like comparing the Sistine Chapel to a backyard doghouse. Lacking the intricate machinery of living cells, viruses represent biology stripped down to an extreme level. They are the true minimalists of the biological world.

Nevertheless, the field of virology is brimming with unanswered questions about these architecturally simple yet mysterious entities. In new research, Arvind Varsani, a molecular virologist at Arizona State University, joins a prestigious international team to explore a particular class of viruses, ferreting out genetic fragments revealing the complexities of viral evolution. 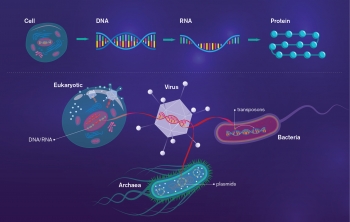 Viruses are composite structures that can acquire genetic material from a variety of sources. Unlike cells, viruses can use either DNA or RNA as their genetic material. As the graphic illustrates, viruses can acquire genetic fragments and incorporate these into their genome. By matching common sequences, the current study explores three plausible evolutionary events that may have contributed to a central component found in a large and important viral group known as single-stranded CRESS viruses. Graphic by Shireen Dooling Download Full Image

The new study examines the evolutionary dynamics of circular Rep-encoding single-stranded (CRESS) DNA viruses. The findings show that this broad class of single-stranded DNA viruses, which infect all three cellular domains of life, have acquired their genetic components through complex evolutionary processes not traceable to a single ancestral event. Rather, viruses are obsessive borrowers, appropriating genetic material from many sources, including bacterial, archaeal and eukaryotic cells as well as circular parasitic replicons, known as plasmids, and other mobile genetic elements, such as transposons.

When a group of mobile elements — like CRESS DNA viruses — arise from more than a single common evolutionary ancestor or ancestral group, they are known as polyphyletic. The phenomenon is common in the viral world, presenting both challenges and opportunities for researchers, as the definitions, taxonomies and evolutionary trajectories of this vast domain are reconsidered, with the help of powerful new techniques.

A better understanding of the promiscuous sharing of genetic information between different viruses and cell-derived genetic snippets may one day improve efforts to control these parasitic entities, some of which have had devastating effects on human wellbeing and crop yield.

Such explorations also hold the potential to shed new light on the origins of Earth’s earliest life and resolve the question of how cell-based life came to coexist with the planet’s staggering array of viruses (dubbed the virome).

“Over the last decade we have been discovering viruses in various ecosystems using metagenomic approaches and as a result populating the CRESS DNA virus databases,” Varsani said. “This has paved the way for a global analysis for CRESS DNA viruses yielding insights into the origin of these and other related viruses.”

Varsani is a researcher at the Biodesign Center for Mechanisms of Evolution and the Center for Fundamental and Applied Microbiomics as well as ASU’s School of Life Sciences. 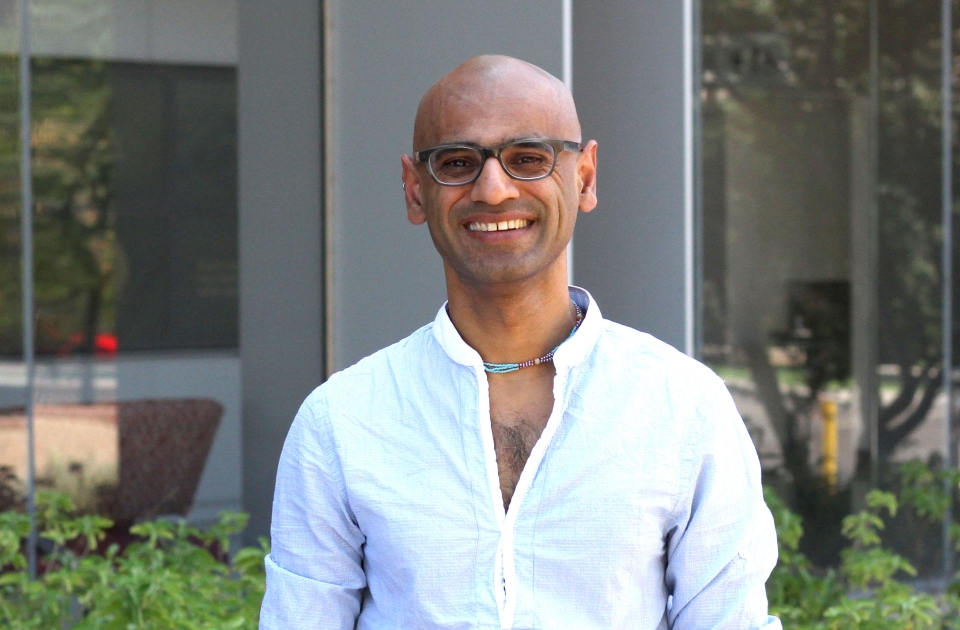 A world of viruses

Recent research into environmental genomics has shown that the most abundant biological entities on Earth are viruses, with virus particles outnumbering cells by one to two orders of magnitude. They display extraordinary diversity and have adapted themselves to virtually all earthly environments. They may also be considered the most successful biological players in terms of their growth potential, abundance, biodiversity, adaptability and impact.

Viruses consist of nucleic acid — either RNA or DNA — surrounded by a protective shell, known as the capsid. The job description of every virus is simple: Enter a living cell, hijack its metabolic machinery and make progeny.

Viruses differ markedly from cells belonging to the bacterial, eukaryotic and archaeal realms, particularly in terms of their modes of replication. While all cellular life relies on double-stranded DNA inheritance, viruses can be single- or double-stranded and make use of either DNA or RNA as their genetic material. Further, their genomes can be either circular or linear, consisting of single or multiple molecules. Viruses lack a single common ancestor and indeed, not a single gene is conserved across the entire virome, making viruses a sort of genetic collage.

Viral metagenomics, sometimes referred to as shotgun sequencing, has opened a new window on the viral world. It enables researchers like Kazlauskas, Koonin, Krupovic and Varsani to explore complex viral communities without any prior knowledge of the viruses present in the environmental sample. The technique is useful for investigating the spectacular global diversity of viruses, many of which are difficult or impossible to cultivate under laboratory conditions.

Among the viruses illuminated through viral metagenomics are the CRESS DNA viruses. Once believed to be rare, such viruses have since been uncovered in soils, deep-sea vents, Antarctic lakes and ponds, wastewater samples, oceans and hot springs. CRESS DNA viruses are part of a vast and diverse viral supergroup that is of critical importance, both medically and economically.

The rolling circle process begins when the Rep protein nicks one of the strands in the dsDNA form of the viral genome, initiating the replication sequence. The loose single strand created by the nick is elongated with the help of a host DNA polymerase, using the whole strand as a template.

Eventually, the newly synthesized single strand of DNA completely dissociates from the original double-stranded form and its ends are joined together into a new single-stranded circle, with the help of Rep. A complementary strand can then form, creating a new double-stranded unit (See Figure 1). The process allows for the rapid synthesis of multiple copies of circular DNA. CRESS viruses use the rolling circle method for replication. Rolling-circle replication is initiated by the Rep protein, which is encoded by a plasmid. It binds to the double-strand origin (DSO) of the plasmid. The protein then nicks one of the strands and remains bound to the 5' end of the nicked strand. The free 3' end is released to serve as a primer for DNA synthesis by DNA polymerase. Using the whole strand as a template, replication proceeds around the plasmid, (hence the name, rolling circle replication) displacing the nicked strand as single-stranded DNA. Once this single-stranded circle is complete, the 5' end which is attached to Rep and the displaced 3' end are joined in a chemical reaction. The double-stranded circle is closed as well when the DNA Polymerase returns to the DSO. By Tobias Vornholt CC BY-SA 4.0, https://commons.wikimedia.org/w/index.pcurid=39652309

Recombination of various functional modules from distinct viral and plasmid groups derived from across the virosphere is a ceaseless process that is constantly generating new ssDNA viruses. The current study examines sequence similarities between various CRESS DNA viruses and nonviral replicons, such as plasmids, combined with phylogenetic tools used to explore their evolutionary relationships.

The results reveal three distinct evolutionary events contributing to the genetic composition of CRESS-DNA viruses. An intriguing kinship appears to exist between CRESS-DNA viruses and rolling circle plasmids found in bacteria, archaea and some eukaryotes. The new results help to illuminate the expanding galaxy of ssDNA viruses that replicate using the rolling-circle mechanism, among these, the CRESS-DNA viruses.

“It is remarkable to see all these evolutionary connections between viruses and nonviral selfish replicons, which once were considered to be unrelated,” Krupovic said. “As a result, the general mechanisms of virus evolution as well as the global organization of the vast viral world start to unravel.”