Silicon Valley has Sand Hill Drive, Austin has Research Boulevard, and Boston has a short stretch of surface street called Massachusetts Avenue, that connects MIT and the Harvard Business School, and Phoenix has ... what again? Connectedness has always been a challenge in the Phoenix tech community and this week ASU Venture Catalyst is hosting Techiepalooza, an event that will bring the tech scene together.

Hosted by ASU Venture Catalyst and partners Co+hoots, Gangplank, Launchspot, and TechCocktail, Techiepalooza will highlight and bring together the growing community of techies and entrepreneurs in the valley. Techiepalooza runs from 4-11 p.m., June 7, at ASU SkySong. To register for the event, visit www.asuventurecatalyst.org. 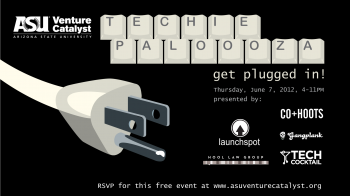 “Building up the ecosystem in Arizona is a prime concern of ours, along with linking the different communities of technologists, coders, entrepreneurs and innovators,” says Gordon McConnell, assistant vice president for Innovation, Entrepreneurship and Venture Acceleration. “We are delighted to be doing this inaugural event with so many partners from across Arizona and hope this will be the start of regular Techiepalooza events in the future.”

Techiepalooza is a recruiting fair, technology conference, and entrepreneurial mixer all fused into one. The afternoon and evening event has a variety of speakers and workshops designed to help startups at every stage. Every attendee is encouraged to bring their laptop, or iPad, and will leave at the end of the night with tools or apps that can be applied to their business the very next day. The speakers offer diverse perspectives and help bridge the gap between the tech and business worlds. Featured speakers include Derek Slife and Christopher Wharton, who will discuss their startup experiences through founding Chow Locally. Michael Hool and Jonathan Coury from the Hool Law Group will shed light on financing opportunities through online funding solicitations and crowdsourcing under the newly signed JOBS Act. Paul Kenjora from Aware Labs will offer lean startup lessons learned from Arizona businesses.

Additionally, Shaun Hirschman from Microsoft will showcase Windows 8 and its new features. Developers attending Techiepalooza will learn how to leverage the platform to build applications on PCs, tablets, and phones. This presentation will give them a first-hand opportunity to see Windows 8 and develop business ideas that could turn into startups.

In addition to speakers, there will be concurrent workshops running throughout the event. These Do-It-Yourself workshops will cover a wide range of topics including building websites, going mobile, and using online tools to grow startups.

“We want to give budding entrepreneurs the basic tools they need to launch their ventures” says Neetu Rao, co-organizer of the event. “With developers in high demand, early stage startups may not have a tech member on their team, so these workshops will be helpful in beginning the process of turning their ideas into reality.”

At the heart of Techiepalooza is offering students, professionals, and community members an opportunity to network with one another. With more than 350 people already registered for this free event, and many companies looking to recruit talent, Techiepalooza is a must attend event for techies, entrepreneurs and the Phoenix business community.

ASU's Denis Simon was participating in the midst of talks with Chinese officials regarding technology innovation and educational issues when blind activist Chen Guangcheng fled to the United States Embassy in Beijing.

Denis Simon was participating in the midst of talks with Chinese officials regarding technology innovation and educational issues when blind activist Chen Guangcheng fled to the United States Embassy in Beijing.

“Negotiations about the activist were going on simultaneously while the two countries were engaging in high-level dialogue,” said Simon, ASU vice provost for International Strategic Initiatives. “There was somewhat of a cloud over the talks because of the parallel issue with Chen Guangcheng happening in the embassy.” 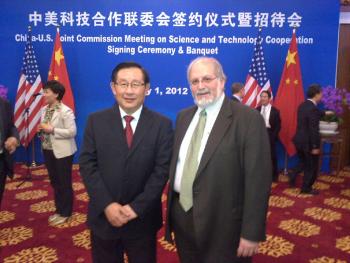 Simon was in China participating in the U.S.-China Strategic and Economic Dialogue that is lead by Secretary of State Hillary Clinton and Treasury Secretary Tim Geithner. He serves as a senior member of the American experts team under the US-China Innovation Dialogue – which is managed on the U.S. side by the White House Office of Science and Technology Policy led by John Holdren, President Obama's science adviser. Talks focused on business, entrepreneurship, high-tech trade, technology transfer and innovation performance. The activist issue eventually was resolved through complex negotiations that allowed Chen Guangcheng to come to the U.S. as a visiting law student.

Education was an important issue discussed among the two countries with talks centering on student exchanges to meet President Barack Obama’s 100,000 Strong Initiative to encourage more U.S. students to study in China and a parallel effort to bring more Chinese students to the U.S.

“Part of the discussion focused on what ASU is doing in China overall in terms of engagement and the multifaceted nature of our ties with Sichuan University, including the role of the Center for American Culture,” Simon said. “That ASU-inspired center has become a stimulus for the U.S. government to support the launch of similar centers around the country.”

While there are several American studies centers in China, the Center for American Culture at Sichuan University is the first Sino-American university-to-university collaboration to focus specifically on enhancing cross-cultural understanding. The center offers an environment for Chinese students and faculty to better understand the United States, its history, language, law, economic system and values. In turn, China has opened numerous Confucius Institutes across the United States that explore the intricacies of Chinese language and culture and also facilitate cultural exchanges.

“Despite the universal nature of science and technology, there still must be common understanding about culture and history,” Simon said.

Bilateral science and technology collaboration is increasing steadily with more U.S. companies opening research and development centers in China. Research ties between universities also are growing. As a result of the evolving talks under the Innovation Dialogue, China relaxed some of its regulations requiring U.S. companies to transfer technology to access Chinese markets, thus allowing business transactions to proceed without American firms necessarily having to surrender valuable technological information in exchange, Simon said.

Simon, who joined the university in January, focuses on global engagement at ASU and works with strategic partners to launch new initiatives that enable the university to become further engaged in countries such as China, Brazil and India.

"This all is part of ASU's commitment to becoming a truly global university," Simon said.

China presents a mutually beneficial opportunity to work with a country that sends more than 1,500 students to ASU each year and for ASU students and faculty to access China's steadily improving academic and research institutions.

“If you’re going to be a serious player in China, you’re competing for mindshare with all of the best universities in the world,” Simon said.

While China is investing heavily in education, research and development and infrastructure, the country does not always have success translating these inputs into new, commercially viable products and services, he added.

“When Steve Jobs passed away, China raised the question of, ‘who is our Steve Jobs?’ They are looking for innovation gurus in their society,” Simon said.

Simon recently celebrated the 30th anniversary of his first trip to China. He has spent the last three decades engaged in research and training related to science and technology development in the country.

He testified in May 2012 before the U.S. Congress Committee on Economic and Security Relations with China that examines the evolving U.S.-China relationship involving military, technology and innovation matters. His comments focused on the emergence of a series of new reforms in China's science and technology system that are designed to enhance Chinese innovation productivity.

Along with an extensive career as a scholar in the China field, Simon also served in senior leadership roles with management consulting firms Andersen Consulting (now Accenture) in Beijing as well as Monitor Group China.  He speaks Chinese and began studying the language in 1972, about the same time President Richard Nixon made his famous trip to China to begin the normalization of relations with the People's Republic of China. Simon has visited 16 Chinese provinces and more than 60 cities; he has witnessed the transformation of the country from a developing nation in the early 1980s to the world's second largest economy today.