This year, Jennifer Barrila, an assistant research professor in Arizona State University's Biodesign Center for Fundamental and Applied Microbiomics, received the PECASE award from the National Aeronautics and Space Administration (NASA) for her research focusing on understanding how infectious disease risks may be altered during spaceflight missions. 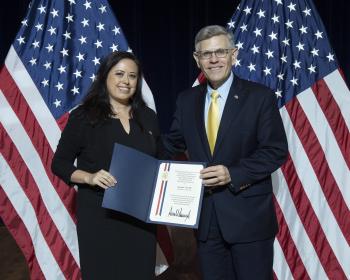 Jennifer Barrila receiving the Presidential Early Career Award for Scientists and Engineers at a ceremony on July 25, 2019. Barrila is pictured with Kelvin Droegemeier, director of the White House Office of Science and Technology Policy. Photo by Donica Payne/DOE photographer Download Full Image

“I am extremely honored to have been selected to receive this award, especially among this year’s talented group of scientists,” Barrila said. “It’s been my lifelong dream to contribute new knowledge in support of the human spaceflight program.”

People are living in space for longer periods of time and will continue to do so as humans travel back to the moon and eventually to Mars. Understanding the medical risks associated with these longer-duration stays becomes particularly critical as humans journey farther from the safety and convenience of our planet. This is especially important since studies have shown the immune system is blunted during both short- and long-term spaceflight.

Barrila’s work specifically focuses on how changes in physical forces associated with microgravity, such as exposure to low fluid shear conditions, or the force of fluid that flows across cells, can alter the responses of both human and microbial cells to influence infection.

“It has been a privilege to work with such brilliant and wonderful faculty, postdocs, students and staff at Arizona State University, NASA and our collaborating institutions to better understand infectious disease risks associated with human spaceflight,” Barrila said.

Barrila first joined ASU in 2008 as a postdoctoral researcher, working with Cheryl Nickerson, also a researcher at the Biodesign Institute and a professor at ASU’s School of Life Sciences. Nickerson’s research demonstrated that certain microbes, like Salmonella, can dramatically change their disease-causing characteristics and gene expression in response to spaceflight and spaceflight analogue culture.

Many of those studies were performed when the bacteria were cultured during spaceflight and then brought back to Earth to infect the hosts. However, more information was needed about how the infection would proceed when both the host and pathogen were exposed to microgravity conditions.

Barrila’s first experience in working on a spaceflight experiment was when she helped co-lead a study called STL-IMMUNE, which launched aboard Space Shuttle Discovery in 2010. The research team performed the first in-orbit infection using human cells in order to study the molecular responses to infection when both host and pathogen were exposed to spaceflight.

Since that time, Barrila has been an investigator on four experimental payloads that either have traveled, or will travel, to the International Space Station. She has also co-led the effort of a large multidisciplinary team to apply a multiomics approach to more deeply explore the impact of modeled microgravity on the host-pathogen interaction between Salmonella and the team’s 3D co-culture model of human colon tissue comprised of both epithelial and immune cells, which was also developed using NASA technology.

Her current research advances these studies by incorporating fecal microbiota from astronauts to better understand how changes occurring to the human microbiome may alter susceptibility to infection.

In 2014, Barrila received the Thora W. Halstead Young Investigator’s Award from the American Society for Gravitational and Space Research.

This award is a further testament to the significance of her work as well as the fruitful collaborations ASU has fostered.

Arizona State University Regents Professor Paul Westerhoff has been named the 2019 Clarke Prize laureate by the National Water Research Institute for outstanding achievement in water science and technology. Westerhoff will receive a medal and a $50,000 prize. The Athalie Richardson Irvine Clarke Prize is one of the most prestigious awards in the world presented to active researchers and practiti...

Arizona State University Regents Professor Paul Westerhoff has been named the 2019 Clarke Prize laureate by the National Water Research Institute for outstanding achievement in water science and technology. Westerhoff will receive a medal and a $50,000 prize.

The Athalie Richardson Irvine Clarke Prize is one of the most prestigious awards in the world presented to active researchers and practitioners making significant advances in water technology. Clarke Prize laureates demonstrate excellence through their continuous contributions to the body of knowledge related to protecting, maintaining, treating and reclaiming water resources. 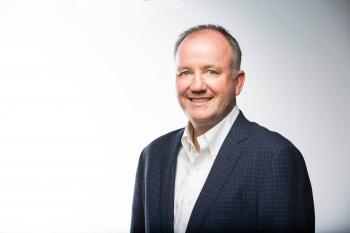 Paul Westerhoff has been selected for the 2019 Clarke Prize, one of the most prestigious awards in the world for water research. Download Full Image

“It is an incredible honor to be named among such an accomplished group of scientists and engineers,” said Westerhoff, the Fulton Chair of Environmental Engineering in the Ira A. Fulton Schools of Engineering and a senior sustainability scientist at the Julie Ann Wrigley Global Institute of Sustainability. “This would not be possible without great students, awesome collaborators and the support of a great university.”

While much of Westerhoff’s work has focused on the risks nanomaterials can pose to contaminating rivers, lakes, streams and water treatment and delivery systems, he and his team are now exploring ways scientists can use nanotechnology to safely solve previously intractable water problems. He will also examine how machine learning and artificial intelligence can be applied to water quality datasets to help resolve global water issues.

Throughout his career, Westerhoff has been a leading contributor in the fields of environmental engineering and contaminant science, earning support from the Water Research Foundation, U.S. Environmental Protection Agency and the National Science Foundation, among numerous others. He currently directs the EPA Center for the Life Cycle of Nanomaterials and serves as deputy director of the NSF Nanosystems Engineering Research Center for Nanotechnology-Enabled Water Treatment. NEWT is developing technologies to provide sustainable water treatment systems for drinking water and industrial wastewaters.

Westerhoff also teaches in the School of Sustainable Engineering and the Built Environment, one of the six schools in the Fulton Schools of Engineering at ASU.

“The Clarke Prize is recognition of the extraordinary impact of Paul’s work in advancing research on the science and technology of water quality and safety,” said Kyle Squires, dean of the Fulton Schools of Engineering. “He’s been instrumental in helping the Fulton Schools become a leader in the water research community and it’s extremely rewarding to see him regarded in such high esteem by his community of peers.”

The Clarke Prize marks the latest achievement for Westerhoff, who has garnered wide recognition for his work related to the treatment and occurrence of emerging water contaminants. He is the recipient of the 2018 WEF Fair Distinguished Engineering Educator Medal, a 2018 Fellow of the International Water Association and winner of the 2017 Sustainable Nanotechnology Organization Achievement Award and the 2006 Water Research Foundation Paul L. Busch Award.

Westerhoff is the 26th winner of the distinguished award. Among the list of Clarke Prize recipients is ASU Regents Professor of Environmental Engineering Bruce Rittmann, the first ever Clarke Prize laureate and winner of the 2018 Stockholm Water Prize.

“Dr. Westerhoff’s innovations in interdisciplinary water research have touched on many aspects of water quality and have helped create a healthier drinking water supply,” NWRI Executive Director Kevin Hardy said. “His unanimous endorsement by the Clarke Prize Executive Committee is a testament to his contributions and his standing in the water community.”

The NWRI is an independent industry institute that collaborates with water utilities, regulators and researchers to develop new, healthy sources of drinking water. Westerhoff will be recognized during an award ceremony on Oct. 19, 2019, in Orange County, California, where he will deliver the 2019 Clarke Prize Lecture.