A byproduct of oil and gas production is a large quantity of toxic wastewater called brine. Well-drillers dispose of brine by injecting it into deep rock formations, where its injection can cause earthquakes. Most quakes are relatively small, but some of them have been large and damaging.

Yet predicting the amount of seismic activity from wastewater injection is difficult because it involves numerous variables. These include the quantity of brine injected, how easily brine can move through the rock, the presence of existing geological faults and the regional stresses on those faults. 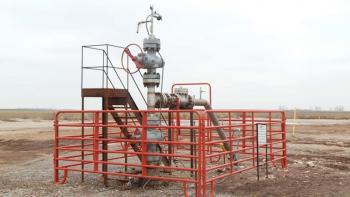 Oil and gas production requires the disposal of wastewater, which is injected into rock formations far underground through wells such as this. To minimize earthquake hazards from this process, an ASU-led team has created a new model for forecasting induced seismicity from wastewater injection. Photo courtesy KFOR-TV, Oklahoma City.

Now a team of Arizona State University-led geoscientists, working under a Department of Energy grant, has developed a method to predict seismic activity from wastewater disposal. The team's study area is in Oklahoma, a state where much fracking activity has been carried out with a lot of wastewater injection and where there have been several induced earthquakes producing damage.

The team's paper reporting their findings appeared in the Proceedings of the National Academy of Sciences on July 29.

"Overall, earthquake hazards increase with background seismic activity, and that results from changes in the crustal stress," said Guang Zhai, a postdoctoral research scientist in ASU's School of Earth and Space Exploration and a visiting assistant researcher at the University of California, Berkeley. "Our focus has been to model the physics of such changes that result from wastewater injection."

Zhai is lead author for the paper, and the other scientists are Manoochehr Shirzaei, associate professor in the school, plus Michael Manga of UC Berkeley and Xiaowei Chen of the University of Oklahoma.

"Seismic activity soared in one area for several years after wastewater injection was greatly reduced," Shirzaei said. "That told us that existing prediction methods were inadequate."

To address the problem, his team went back to basics, looking at how varying amounts of injected brine perturbed the crustal stresses and how these lead to earthquakes on a given fault.

"Fluids such as brine (and natural groundwater) can both be stored and move through rocks that are porous," Zhai said.

The key was building a physics-based model that combined the rock's ability to transport injected brine, and the rock's elastic response to fluid pressure. Explained Shirzaei, "Our model includes the records collected for the past 23 years of brine injected at more than 700 Oklahoma wells into the Arbuckle formation." 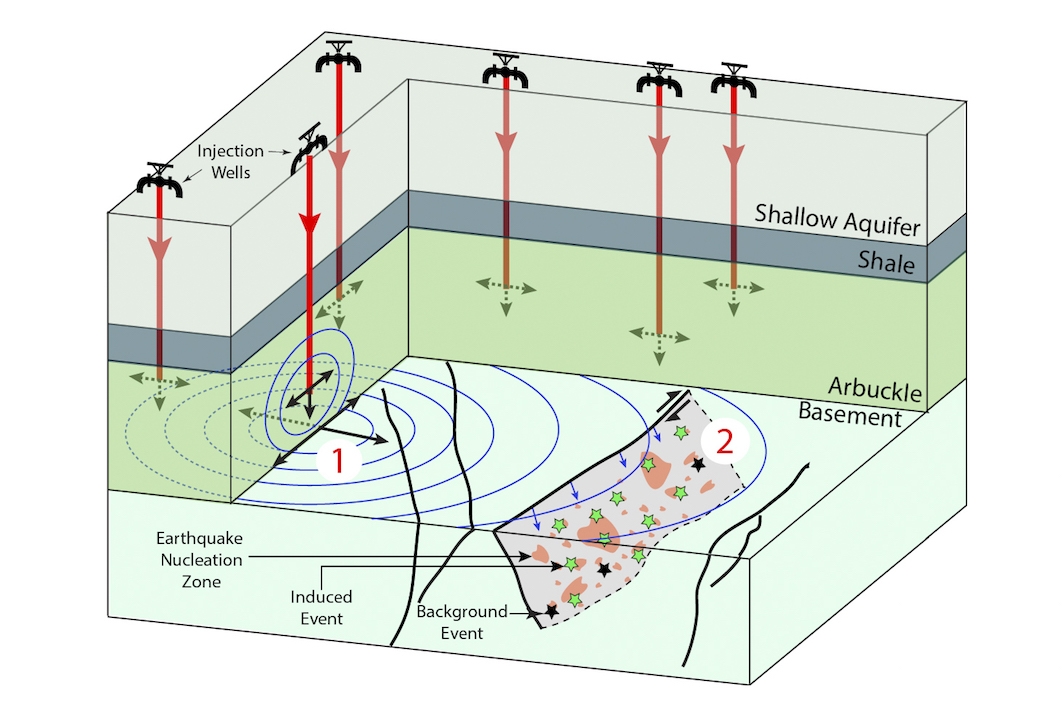 Wells drilled into Oklahoma's Arbuckle formation inject wastewater (1) which then disperses through the rock. As it spreads, the wastewater can trigger earthquakes in fault zones (2), but their size depends on the amount injected and the rock's properties. The new model can predict quake probabilities by the quantity of wastewater injected. The model shows earthquake probability curves for central Oklahoma increasing to 2015 due to brine injection. After injection is reduced and assumed to end in 2017, brine continues to diffuse in the rock, and the curves retreat to background levels. The new model allows operators to compute quake probability for various injection scenarios, maximizing injection while minimizing hazards.

He added that to make the scenario realistic, the model also includes the mechanical properties of the rocks in Oklahoma. The result was that the model successfully predicted changes in the crustal stress that come from brine injection.

For the final step, Shirzaei said, "We used a well-established physical model of how earthquakes begin so we could relate stress perturbations to the number and size of earthquakes."

The team found that the physics-based framework does a good job of reproducing the distribution of actual earthquakes by frequency, magnitude and time.

"An interesting finding, was that a tiny change in the rocks' elastic response to changes in fluid pressure can amplify the number of earthquakes by several times," Zhai said. "It's a very sensitive factor."

While wastewater injection can cause earthquakes, all major oil and gas production creates a large amount of wastewater that needs to be disposed of, and injection is the method the industry uses.

"So to make this safer in the future, our approach offers a way to forecast injection-caused earthquakes," Shirzaei said. "This provides the industry with a tool for managing the injection of brine after fracking operations."

Knowing the volume of brine to be injected and the location of the disposal well, authorities can estimate the probability that an earthquake of given size will result. Such probabilities can be used for short-term earthquake hazard assessment.

Alternatively, the team says, given the probability that an earthquake of certain size will happen, oil and gas operators can manage the injected brine volume to keep the probability of large earthquakes below a chosen value.

The end result, said Zhai, "is that this process will allow a safer practice, benefiting both the general public and the energy industry."

A summer fellowship is affording Arizona State University student Jan Cordero Casillas opportunities to apply aspects of his doctoral research, which focuses on visualizing better methods for helping people to understand data and support decision-making regarding developing urban resilience and climate mitigation. Cordero, originally from Puerto Rico and in his second year of the human and social...

Tempe campus , The College of Liberal Arts and Sciences , School of Earth and Space Exploration , Science

Cordero, originally from Puerto Rico and in his second year of the human and social dimensions of science and technology doctoral program, is nearing completion of the 12-week fellowship. 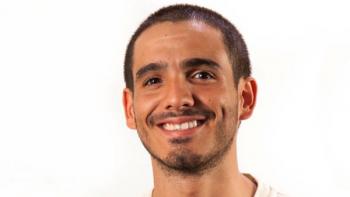 “Two years have passed since Hurricane Maria, and there are still hundreds, if not thousands, living under blue tarps; areas where economic instability has become the norm; and places where the search for a resilient future meant returning to the status quo," Cordero said. "These types of problems encouraged me to try and answer a very important question: How do we make sure science, technology and advocacy does not become an opportunity for only some people and barriers for others?”

Cordero’s summer has been productive as a fellow with the Environmental Fellows Program at the University of Michigan School for Environment and Sustainability, sponsored in partnership with the Environmental Grantmakers Association. The program connects students from historically underrepresented groups with opportunities in environmental and philanthropic organizations. He is placed with the New York office of the Natural Resources Defense Council where he collaborates on multiple projects including:

Cordero also just received a new four-year National Science Foundation Research Traineeship at ASU. He has been working with Thad Miller, assistant professor at the School for the Future of Innovation in Society and the Polytechnic School.