Native plants in this study fared worse than invasive species

Nitrogen and sulfur deposited in the soil from industrial agriculture and the burning of fossil fuels can be detrimental to plant species, but each species can be affected differently. 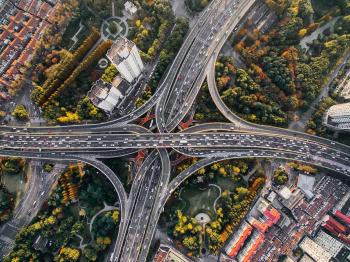 Fossil fuels and industrial agriculture cause increases of nitrogen and sulfur deposition in the soil. A recent study by School of Life Sciences associate professor Heather Throop and colleagues demonstrate that this negatively impacts 70% of the nearly 350 plant species studied. Photo courtesy of Pixabay Download Full Image

The study, published in Nature on July 1, 2019, revealed that 70% of the 348 species of plants measured were negatively impacted by either nitrogen or sulfur in the soil. However, the effects varied.

“The most significant thing for me was we realized how differently individual plant species respond to air pollution,” Throop said. “We’ve known plants are extremely sensitive to nitrogen and sulfur, but this gives us an idea in a lot of species what we can expect in those responses.”

While it may seem like a daunting task to go through a database of more than 14,000 species and find the ones that had been studied enough to determine how they are affected by the soil, Throop was one of 16 authors working on this data. The project was funded by the United States Geological Survey, which established the John Wesley Powell Center for Analysis and Synthesis to fund working groups that can solve environmental problems from existing data.

While Throop now studies desert carbon cycles, she studied effects of nitrogen on plants for her PhD and joined an Ecological Society working group of scientists who studied nitrogen or sulfur deposition. Led by postdoctoral researchers Christopher Clark from the Environmental Protection Agency and Samuel Simkin from the University of Colorado, the group scoured existing data to find areas where plant composition and nitrogen or sulfur deposition was known.

Though they found a wide range of effects, an interesting pattern emerged: Native plants tend to decline in areas with high nitrogen or high sulfur deposition while invasive or introduced plants often did better.

“This can help us understand how factors like air pollution and invasive species that are successful in an area may be coupled,” Throop said. “As we learn more about the amount of deposition species of concern can tolerate, that can help inform management decisions in areas that seem to be more highly impacted.”

The fate of plant species in response to pollution might lie in scientists' ability to understand tolerable deposition levels.

The Clean Air Act has dramatically reduced soil deposition levels and improved a lot of areas. However, levels are still much higher than the preindustrial era.

“This is something we can be very optimistic about. Environmental regulations have been very successful,” Throop said. “We know that if we reduce the fossil fuels produced by these plants, we can expect to see reduction in deposition. But if we increase that production, we know we can make the situation worse.”

When diagnosing and treating illnesses, traditional medicine looks to the ailment itself. But what about the biological, environmental and evolutionary factors that paved its way? That’s one of the questions the Center for Evolution and Medicine at Arizona State University was created to address. Founded in 2014 by psychiatrist and researcher Randolph Nesse, the center is a unit of The College o...

When diagnosing and treating illnesses, traditional medicine looks to the ailment itself. But what about the biological, environmental and evolutionary factors that paved its way?

That’s one of the questions the Center for Evolution and Medicine at Arizona State University was created to address. 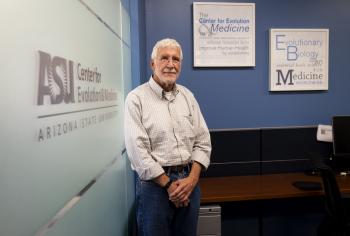 Ken Buetow came to ASU in 2012 from the Cancer Research Institute. Now, as the director of the Center for Evolution and Medicine, he'll help take the interdisciplinary center into its next developmental stage. Download Full Image

Founded in 2014 by psychiatrist and researcher Randolph Nesse, the center is a unit of The College of Liberal Arts and Sciences that applies evolutionary biology to medical science to develop a new understanding of health issues.

After five years of growth, the center’s next phase was marked by ASU human genetics and genomics researcher Ken Buetow’s directorial appointment this summer.

Ken Buetow came to ASU in 2012 from the Cancer Research Institute. Now, as the director of the Center for Evolution and Medicine, he'll help take the interdisciplinary center into its next developmental stage.

Buetow, also a professor in The College’s School of Life Sciences, came to ASU in 2012 from the National Cancer Institute, where he was the founding director of the Center for Biomedical Informatics and Information Technology. His research focuses on using population genetics and computational theory to better understand ailments including cancer, metabolic disease and obesity.

As an academic with the ASU center, Buetow collaborates with an interdisciplinary team exploring how diseases impact populations and the determining factor played by evolutionary biology.

“The National Institutes of Health groups that study obesity are different than those studying diabetes or cancer, but the problems we face in the 21st century in terms of cancer and other diseases are not going to be addressed using that individual, siloed perspective,” he said. “The center is a place where we have the incentive and institutional support to conduct transdisciplinary research that views the whole as being more than the sum of its parts.”

Buetow and his colleagues have observed that men are more prone to cancer in nonreproductive organs than women. Women, meanwhile, are less prone to cancer but more likely to have an autoimmune disorder. In a recent study from the center, Buetow and fellow researchers Melissa Wilson, Heini Natri, Angela Garcia and Ben Trumble posed the “pregnancy-compensation hypothesis” to explain the disproportion.

It suggests the female immune system developed differently from the male in order to facilitate pregnancy and guard against pathogens — a biological trait evolved to protect the growing fetus. But when women are not continuously pregnant as they were in preindustrial times, the hypothesis suggests, the immune system sometimes tries to defend against pathogens that are not there, triggering the self-attacking response of an autoimmune disorder. However, this heightened immunity may also protect against cancer.

A center for the New American University

Viewing medicine through an evolutionary lens was a crucial step in that research. Buetow said it’s a perspective future work could build upon to understand other gender-biased ailments, such as why men have higher rates of cancer.

He said the center’s next stage will focus on exemplifying how the knowledge taken from interdisciplinary collaboration could play a role in the future of medicine.

“We have already determined evolutionary medicine is important as a fundamental consideration in etiology, now we want to take the next step and demonstrate how using this approach can actually lead to new health intervention insights,” he said.

Nancy Gonzales, dean of natural sciences at The College, said that by engaging academics from a range of science disciplines, the center is able to develop a clearer picture of all the factors impacting health outcomes.

“We have people from the School of Human Evolution and Social Change, the School of Life Sciences and the Department of Psychology, all working together to think not just about evolutionary principles, but how that might one day inform a different way to treat illnesses,” she said. “Randy Nesse built the foundation for that work, and we are excited to see the new direction and ideas that Ken Buetow will bring to the table.”

Gonzales is the co-director of the ASU REACH Institute, a lab in the Department of Psychology that partners with scientists, policy makers and communities to address public health and welfare issues through research. She said the center has so far been studying the link between the science of evolutionary biology and medicine, but innovations at the center could one day interact with the health solutions REACH is enacting on the ground.

“Once we understand how diseases evolve, I think the next big leap for the center is finding out how that knowledge can help us work with patients and treat diseases,” she said. “That will provide greater potential for linking up to the REACH institute, which is more focused on making sure the evidence-based practice we have collected reaches the community and into medical clinics.”

When Nesse first came to ASU in 2014 to launch the center, it was a fledgling initiative backed by President Michael Crow and then-Provost Robert Page.

Nesse came to ASU after 40 years as a physician in psychiatry, psychology and social research departments at the University of Michigan. Though the idea was years in the making, he said he’d faced funding hurdles at other institutions. It finally gained traction at ASU.

“Most people assume that doctors and medical researchers already know a lot about evolution, but they don't,” he said. “ASU made space, and now we have perhaps the strongest center of any institution — that’s an example of the innovation no other university is doing.”

In its next phase, Nesse said the center will also expand its educational platforms. A new certificate program is being developed to focus on evolutionary medicine, while an online resource will provide opportunities to international learners. A partnership with Mayo Clinic in Scottsdale is also in the works.

“Beyond being a place for research and boundary-breaking collaborations, it was very clear early on that we wanted to be a place creating new educational opportunities,” he said. “Everything about this really exemplifies transdisciplinarity, and I think Ken is the perfect person to move it forward.”