Astrophysicists know that iron (chemical symbol: Fe) is one of the most abundant elements in the universe, after lightweight elements such as hydrogen, carbon and oxygen. Iron is most commonly found in gaseous form in stars such as the sun, and in more condensed form in planets such as Earth.

Iron in interstellar environments should also be common, but astrophysicists detect only low levels of the gaseous kind. This implies that the missing iron exists in some kind of solid form or molecular state, yet identifying its hiding place has remained elusive for decades. 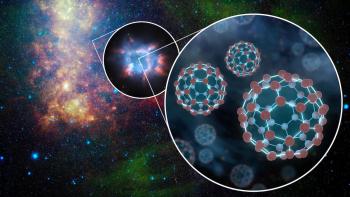 Carbon-chain molecules as complex as C60 buckminsterfullerenes — "buckyballs" — may form in space with the help of clustered iron atoms, according to new work by ASU cosmochemists. The work also explains how these iron clusters hide out inside common carbon-chain molecules. Credit by NASA/Jpl-Caltech Download Full Image

A team of cosmochemists at Arizona State University, with support from the W.M. Keck Foundation, now claims that the mystery is simpler than it seems. The iron isn't really missing, they say. Instead it's hiding in plain sight. The iron has combined with carbon molecules to form molecular chains called iron pseudocarbynes. The spectra of these chains are identical with the much more common chains of carbon molecules, long known to be abundant in interstellar space.

The team's work was published late in June in the Astrophysical Journal.

"We are proposing a new class of molecules that are likely to be widespread in the interstellar medium," said Pilarisetty Tarakeshwar, research associate professor in ASU's School of Molecular Sciences. His co-authors, Peter Buseck and Frank Timmes, are both in ASU's School of Earth and Space Exploration; Buseck, an ASU Regents Professor, is also in the School of Molecular Sciences with Tarakeshwar.

The team examined how clusters containing only a few atoms of metallic iron might join with chains of carbon molecules to produce molecules combining both elements.

Recent evidence obtained from stardust and meteorites indicates the widespread occurrence of clusters of iron atoms in the cosmos. In the extremely cold temperatures of interstellar space, these iron clusters act as deep-freeze particles, enabling carbon chains of various lengths to stick to them, thus producing different molecules from those that can occur with the gaseous phase of iron. 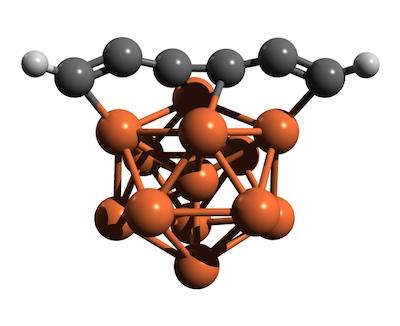 Iron pseudocarbynes are likely widespread in the interstellar medium, where extremely cold temperatures would lead carbon chains to condense on the Fe clusters. Over eons, complex organic molecules would to emerge from these Fe pseudocarbynes. The model shows a hydrogen-capped carbon chain attached to an Fe13 cluster (iron atoms in reddish brown, carbon is gray, hydrogen is light gray). Illustration credit: P. Tarakeshwar/ASU

Said Tarakeshwar, "We calculated what the spectra of these molecules would look like, and we found that they have spectroscopic signatures nearly identical to carbon-chain molecules without any iron." He added that because of this, "previous astrophysical observations could have overlooked these carbon-plus-iron molecules."

That means, the researchers say, the missing iron in the interstellar medium is actually out in plain view but masquerading as common carbon-chain molecules.

Buseck explained, "Longer carbon chains are stablized by the addition of iron clusters." This opens a new pathway for building more complex molecules in space, such as polyaromatic hydrocarbons, of which naphthalene is a familiar example, being the main ingredient in mothballs.

Irina Levin, the new director of the Critical Languages Institute at Arizona State University, sees a delicate balancing act in her goals.The institute is a national training center for a dozen less commonly taught languages, such as Macedonian, and offers intensive courses and study abroad programs every summer. Students make remarkable progress in language acquisition through individual attentio... 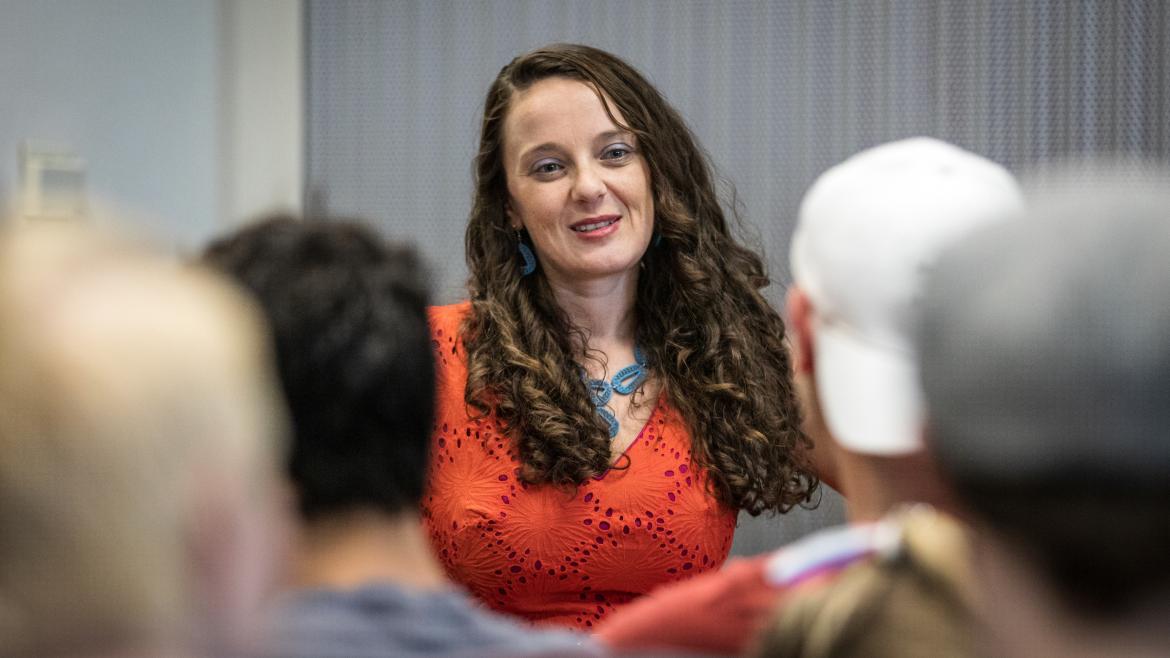 Irina Levin, the new director of the Critical Languages Institute at Arizona State University, sees a delicate balancing act in her goals.

The institute is a national training center for a dozen less commonly taught languages, such as Macedonian, and offers intensive courses and study abroad programs every summer. Students make remarkable progress in language acquisition through individual attention.

“Right now Armenian has three students and when I was in that classroom, it was week three or four and the whole class time was in Armenian. They were conversing. It was amazing,” Levin said.

“On the one hand, maybe that’s only possible because there were three students in the class but on the other hand, I wish more students could take advantage of this.”

Growing the institute's enrollment is a major goal for Levin, who took over as director in May. The institute is part of the Melikian Center for Russian, Eurasian and East European Studies, of which Levin is the associate director.

“The classes are small, but a big part of my role will be to figure out how to grow them sustainably, because if we don’t teach those languages, it’s not clear they will be available anywhere,” she said.

The Critical Languages Institute has 133 participants this summer, about a third of whom are ASU students. About 60% of the students take Russian and the rest are spread among 11 other languages — Bosnian/Croatian/Serbian, Macedonian, Albanian, Hebrew, Persian, Turkish, Uzbek, Indonesian, Ukrainian, Polish and Armenian. Courses are open to anyone, including high school juniors and seniors. Tuition is waived. Students earn eight or 10 ASU credits, depending on the language, for a flat fee of $1,500. Students who choose to extend their session with a study abroad trip earn additional credits.

The institute started in 1991, teaching one language — Macedonian. Over the years, as other languages were added, some were dropped, including Macedonian. Last year, the institute added Ukrainian, and this year, resumed Macedonian. 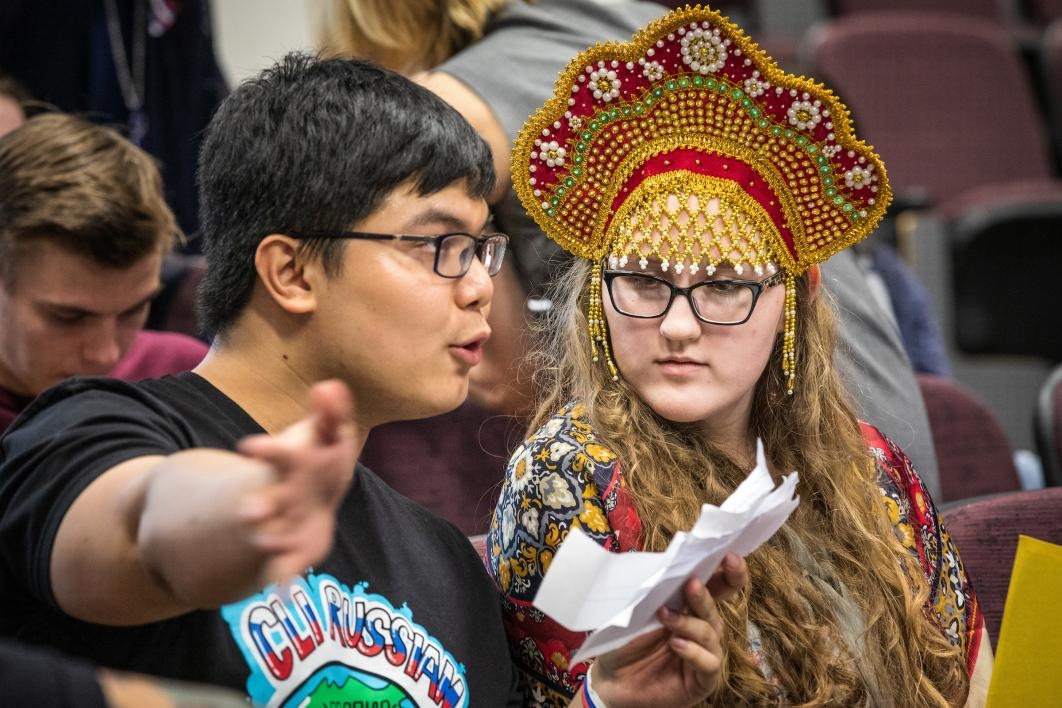 Hoai Diep, a junior at the University of Massachusetts, practices his lines with McKenzie Kyte, a high school student from Tempe, at the Russian Culture Night at Coor Hall. Kyte, who already speaks Russian, is enrolled in a Hebrew program at the institute. Embry-Riddle Aeronautical University sophomore Gavin Olson joins his classmates in a folk dance at Russian Culture Night, part of the Critical Languages Institute's eight-week intensive foreign language program. Olson, who is in the Army ROTC program, will be pursuing a career in law. ASU junior Kyle McGorman gets a hand-up as he and his classmates act out the folk tale of Repka, or The Giant Turnip, at Russian Culture Night, part of the Critical Languages Institute's eight-week intensive program. The event featured traditional Russian poetry, music and stories by Alexander Pushkin and finished with homemade Russian delicacies.

Question: Is teaching these languages important to national security?

Answer: Project Global Officer has a list of critical languages that are key to national security and we teach Russian and Indonesian, which are both on that list. The Department of Defense is looking to not just improve language skills but also for regional expertise and intercultural communication. That’s why with all of our languages, but especially Indonesian and Russian, we have a lot of cultural enrichment.

We also have Title 8 students, who study languages from the former Soviet Union or formerly socialist countries, like Russian, Macedonian, BCS, Armenian and Uzbek. That’s part of the State Department but the goal is similar to the Department of Defense — increasing regional expertise, language knowledge and intercultural competence.

So it’s not just a defensive approach to protecting our country, but a proactive, positive approach. I think when people think about language learning for national security, they sometimes think "Oh, we’re going to spy on them or infiltrate." But it’s for better relations and better understanding. It’s respectful to understand someone’s culture and language. It’s a positive thing that helps to build relationships.

Q: So students are learning more than just the language?

A: One thing that’s new this year for the Title 8 students in a pilot, which we may expand, is a one-credit online course on the geopolitics of the eastern European, Eurasian region. The idea was to create a Title 8 cohort and a feeling that they know each other even though they may be in different classes.

The concern with the fragility of democratic institutions there is a big part of it. It’s the idea of transition, but where does it lead to and when does it end? When are they done transitioning?

The reasoning for looking at Eurasia as a region and not just a place for countries that aren’t quite Europe and not quite Asia is that these countries have been out of the mainstream of academic study. Russia and the Soviet Union get a lot of attention. But places like Uzbekistan were seen only as the edge of the Soviet empire. But this brings it to the forefront.

Q: What other benefits do the students get from the CLI experience?

A: We set up visits with federal agencies; the CIA, FBI and NSA have all been here.

They come because they know what kind of program we are, and they talk about the benefits of having a language when you go into one of these agencies, including a higher pay grade but also more interesting work. If you are a Russian speaker or a Turkish speaker or a Persian speaker, which are all languages we offer, your application definitely gets a boost.

We also had Kyle Mox from the Office of National Scholarship Advisement come and talk about Boren and Fulbright and other international scholarships. Having done this summer program shows not just that you already have some language and that you can enter at an intermediate level, where there’s always less competition, but also your commitment.

Q: Besides increasing enrollment, what are your goals for CLI?

A: We want to make sure that the greater ASU community, our students, our online students, students at all the campuses, know about this opportunity. We still hear that this is not the most widely known program on campus.

We’ve been doing outreach but we want to make sure that they know we have scholarship funds available specifically for ASU students. And they are still eligible for other scholarships for particular languages.

There are diasporic communities around the country and even locally for whom the younger generation has a lot of language loss. We want to make sure they know about us.

I also see myself trying to think about how the program, because it is so intense, is nearly impossible to do while working full time. We do provide scholarships, but what more could we do to facilitate people from lower socioeconomic backgrounds to take this program? We don’t want to water down the program and say, "You only have two hours of class a day and two hours of homework." We could charge less for that but it won’t be the same amount of credits and we wouldn’t be getting the high level of achievement.

Q: How many languages do you speak?

A: I am a heritage speaker of Russian and Turkish I painstakingly learned through summer language programs. I did have various federal grants to do summer language learning in Turkey, one of which was the CLS, which we encourage our students to apply for.

I got my PhD from NYU in 2017 based on field work in Turkey, Georgia and Azerbaijan, looking at a group of people forcibly displaced form the Soviet Union in the 1940s. I was interested in the long-term impacts of forced displacements. How do people see spiritual and ancestral belonging and how does that interact with ideas about citizenship?

I was excited to come to Arizona because those issues are really relevant here — about borders and displacement and what used to be two villages now being on opposite sides of an international border and those citizenships becoming differently privileged.