The Institute for Humanities Research has awarded six fellowships to humanities scholars at Arizona State University.

Scholars will meet together regularly to share ideas and resources related to the 2019–20 fellows theme, “Borders and Boundaries.”

Painting by Gertrudes Chávez Ponce, of her home in Atarque, New Mexico. Contributed by Vanessa Fonseca-Chávez as part of her project "Embodying 'Querencia' in the Eastern Arizona and Western New Mexico Borderlands."

The theme seeks to provoke conversation around the following questions:

This timely topic will drive an accomplished group of faculty to pursue socially embedded research.

Laurie Manchester, associate professor, School of Historical, Philosophical and Religious Studies, The College of Liberal Arts and Sciences. Project: From China to the USSR: The Return of the “True” Russians.

When an earthquake or a tsunami strikes, aid groups and rescue teams begin assessing emergency needs right away. But other crises are harder to quantify.

Patricia Solís, executive director of the Knowledge Exchange for Resilience, explains the data on a map of Maricopa County denoting the total number of residential homes (in white) with the number of households receiving utility payment assistance.

The Centers for Disease Control and Prevention identifies extreme heat as the leading cause of weather-related deaths in the United States, a threat the Phoenix area knows firsthand. 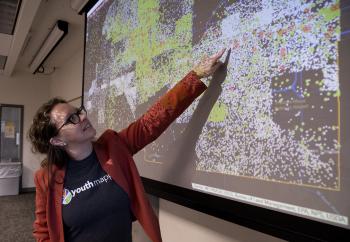 Patricia Solís, executive director of the Knowledge Exchange for Resilience, explains the data on a map of Maricopa County denoting the total number of residential homes (in white) with the number of households receiving utility payment assistance. Download Full Image

The Maricopa County Department of Public Health reported a record 182 heat-related deaths in 2018, the highest number in 13 years. Officials said homeless populations, outdoor workers and those without adequate air conditioning units inside their homes were most affected.

Those statistics aren’t the result of one disaster incident, but a culmination of many factors. So how can communities better prepare?

That’s one question the Knowledge Exchange for Resilience (KER) initiative at Arizona State University has sought to answer in a pilot project studying the impacts of the Valley’s soaring summer temperatures and the community mechanisms trying to help.

“When people see the word resilience, they often think about disasters,” said Patricia Solís, who serves as the KER’s executive director. “Rather than preparing solely for the next big shock or even the next heat wave, we also want to take a long-view look at the chronic, slow-moving issues affecting communities.”

Led by principal investigator Elizabeth Wentz, dean of social sciences at The College of Liberal Arts and Sciences, KER is a universitywide effort launched in 2018 with the support of a $15 million grant from the Virginia G. Piper Charitable Trust.

The multipronged effort is run by seven core staff members, around 20 graduate and undergraduate student researchers and a host of community and ASU partners working together to study resilience in Maricopa County and identify the gaps that still remain. Their first project focuses on heat resilience, but Wentz said research focused on education, health care and urban planning innovation is also on the horizon.

“The broader picture around resilience looks at how the community responds to long-term stresses and short-term shock events,” Wentz said. “This initiative’s strength is bringing data from different sources together and looking at them collectively, so that we can start having research-informed conversations about these issues.”

It is within that framework that KER’s pilot project began focusing on the Maricopa County Utility Assistance network late last year. A collection of some 80 aid organizations, the program uses federal funding and private donations to help low-income households pay their summer utility bills. According to Solís’ data, an average of 5,000 households have applied for the program across the Phoenix area each year since 2014.

Using location data obtained from the network, the KER team mapped out the locations of households receiving assistance. Next, they overlaid that data with a set gathered from county health officials pinpointing the general locations where indoor heat-related deaths had occurred.

In December of last year, Solís, Wentz and the rest of the KER team were comparing the two data sets when they noticed a strange gap in a section of the East Valley.

“We noticed this area along Main Street in Mesa that showed incidences of heat-related deaths, but almost no requests for utility assistance,” she said. “The blank spot in utility-assistance data really popped out at you on the map, because there wasn’t anything like it elsewhere.”

Further investigations revealed the patch was a residential area largely populated by mobile homes made of materials Solís said can put residents at a greater risk of heat exposure.

“These homes are metal trailers built on concrete; that's different than a single family home,” she said.

The satellite imagery revealed the general makeup of the area, but Solís said KER’s research aimed to go one step further by analyzing what it meant.

“All of that is visual data, you don't get any more information from it,” she said. “It doesn’t tell you the square footage of something, who lives there, or even whether it’s a commercial or residential building — we needed to convert that visual data into something we can use.”

In June, Solís hosted a mapathon in the KER lab that looked to do just that. A collaboration between the initiative and the ASU chapter of YouthMappers, the event had student volunteers use open-source mapping technologies to better understand the urban makeup of the Mesa area in question. 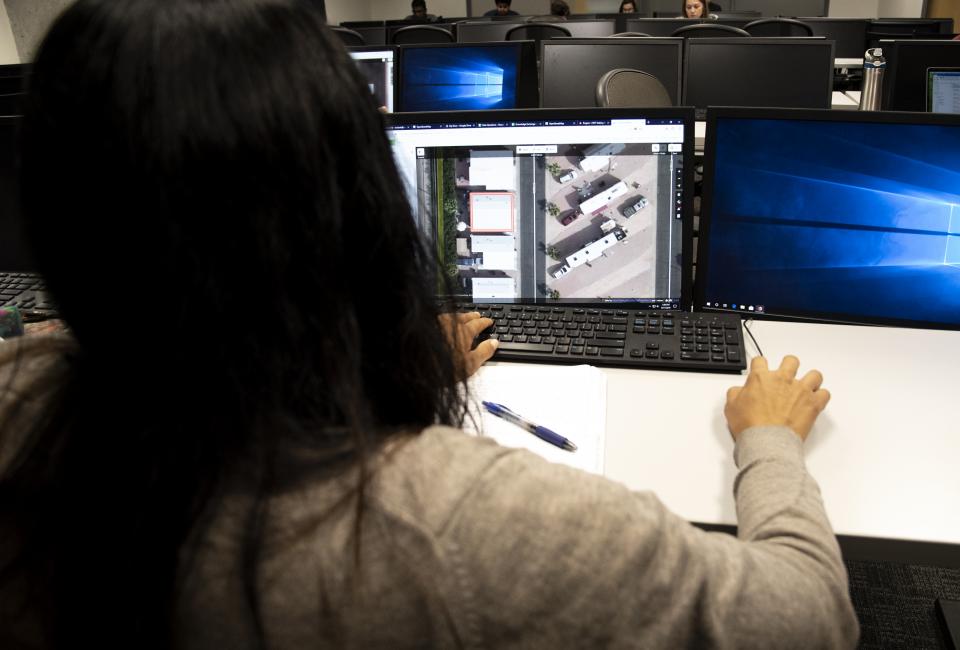 With chapters in over 143 universities spread across 41 countries, YouthMappers is a student-led consortium that creates mapping materials that help aid organizations and allow them to work more efficiently in emergency and development zones around the world.

Solís, who co-founded and directs the international organization, created an ASU chapter last year. She said projects are often focused abroad. Using the mobile home strip in Mesa, the KER collaboration gave student volunteers the chance to see their skills in a new light.

“By mapping out this data, we're hoping to build models about how our built environment interacts with variables like social and economic demographics, and how all of those factors relate to heat-related death and illness,” Solís said. “Getting YouthMappers involved is a way to generate this spatial data where it doesn't already exist; normally that’s in disaster zones like Puerto Rico post-hurricane, or in refugee camps, but the reality is there are also a lot of urgent problems here that would benefit from further data analysis.”

The ASU mapathon in June was one step in a larger effort focused on the mobile home strip and its risk factors.

Elisha Charley, a researcher currently pursuing a doctorate in The College’s School of Geographical Sciences and Urban Planning, works with KER as part of a fellowship focused on how indigenous knowledge can inform today’s built environments. She said the structural data generated from the mapathon will be used in further examinations.

“Satellite imagery shows us details like vegetation and green spaces, so the fact that you can see the white mobile home patch from space means it’s pretty significant,” she said. “My portion of the research will be about collecting data of the indoor and outdoor climates of that area and understanding the impacts of how the structure is built.”

For Alexandria Drake, a doctoral student studying global health in The College’s School of Human Evolution and Social Change, attending the event was a chance to delve into an issue she saw witnessed up-close as a researcher at the Arizona Department of Health Services.

“I would hear from people having to decide between keeping their home cool and paying for medical bills or rent, so this is definitely a health equity problem,” she said. “One of the things that is really important when you're talking about public health is being able to visualize data in a way that is digestible and resonates with people.”

Wentz said KER’s ability to bring student researchers into the fold with collaborations like the one with YouthMappers allows the initiative to come full circle.

“One of our primary missions of the university is student success, so anything we can do to bring them into the community and into the work we do adds value for everyone involved,” she said. “Additionally, many populations experiencing challenges like utility assistance come from the low-income neighborhoods some of our students are also from, so it’s also an opportunity for them to make a difference in their own communities.”