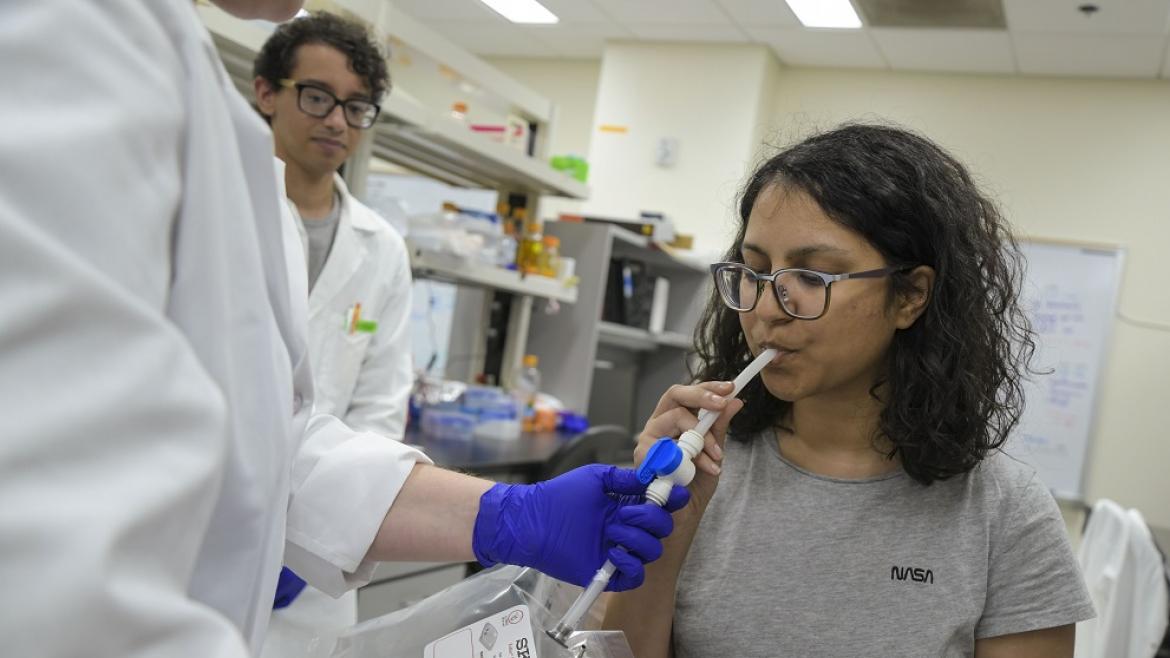 Patients with cystic fibrosis may benefit from more effective tests

If detecting lung infections were as simple as taking a breath, patients with cystic fibrosis would be able to seek treatment sooner.

People with cystic fibrosis who get bacterial infections in their lungs often experience a decline in their lung health — which ultimately shortens their life spans. However, if the infections are caught and treated early enough, these same patients can live longer, healthier lives.

But there’s a conundrum.

In children with cystic fibrosis (CF), the bacterial infections caused by pseudomonas aeruginosaA common encapsulated, Gram-negative, rod-shaped bacterium that can cause disease in plants and animals, including humans. are often not detected by using traditional tests. Left untreated, these infections flourish in a child’s lungs and can cause serious damage.

Heather Bean, assistant professor with Arizona State University’s School of Life Sciences, is working to solve this problem. She and a group of collaborators have launched a new clinical study, with the hope of finding these infections sooner by using breath samples instead of invasive testing.

“Damage to their lungs is what kills most people with cystic fibrosis these days. It used to be that they died from malnutrition, but there have been some really good advancements in treatment,” said Bean, also an associate faculty member with the Biodesign Center for Immunotherapy, Vaccines and Virotherapy.  “People with this disease start getting lung infections in infancy and every time they get another lung infection, it’s causing damage. They’re treated with antibiotics as soon as the infections are detected but eventually, these therapies end up failing.”

The Cystic Fibrosis Foundation is providing three years of funding and the National Institutes of Health is providing an additional year of funding for Bean’s lab to start a clinical study that will determine whether pseudomonas aeruginosa infections can be detected from breath samples.

Cystic fibrosis (CF) is a genetic disorder that is diagnosed through newborn screening. It’s characterized by thickened mucous secretions that are particularly damaging to the lungs, which can become clogged.

Clogged lungs are a great place for bacteria to multiply, making people much more susceptible to lung infections. Symptoms typically include frequent chest infections and difficulty breathing. Pseudomonas is the top threat to people with this disease because it’s aggressive and develops antibiotic resistance. 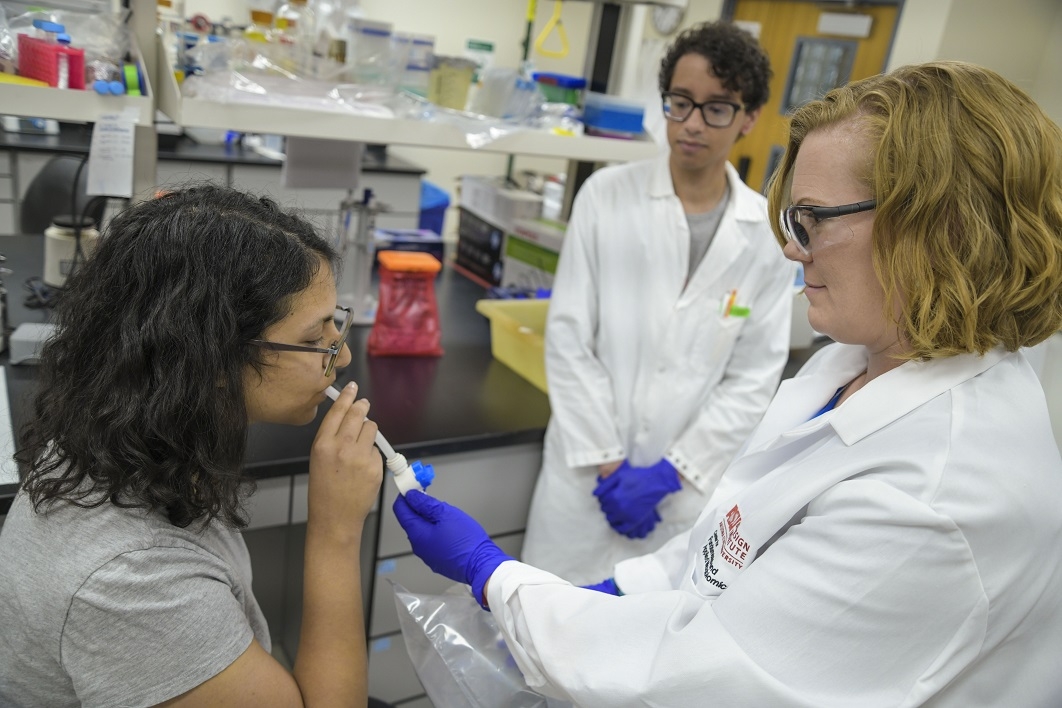 School of Life Sciences Assistant Professor Heather Bean is launching a clinical study to learn if breath samples can lead to earlier diagnoses of lung infections in people with cystic fibrosis. She and graduate student Trenton Davis will be collecting 288 breath samples from five hospitals across the country. 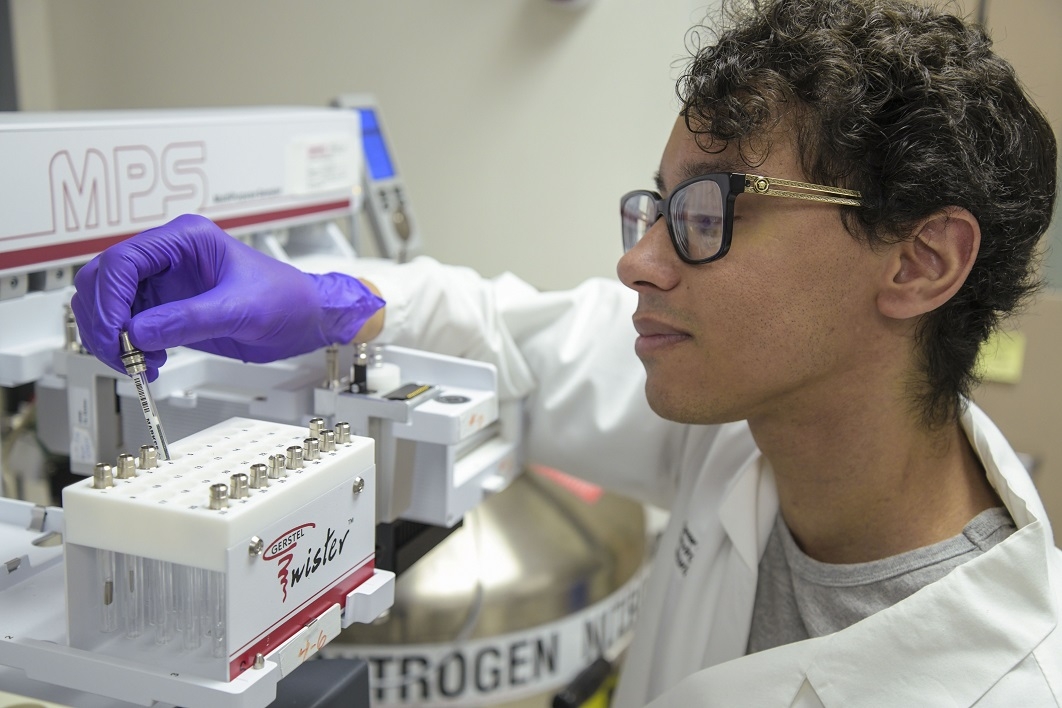 School of Life Sciences graduate student Trenton Davis measures breath samples in gas chromatography and mass spectrometer. This machine identifies chemicals in the breath and allows him to compare which appear in healthy versus infected lungs. People with CF typically live into their mid-late 30s, and through research, life spans continue to improve. Early diagnostics help patients live longer, but the infections in children under 8 years old are typically diagnosed through throat cultures. Young children cannot reliably cough up enough mucus for a culture, like adults can.

Thus, in order to reliably detect infections, young patients often have to have their lungs flushed and scraped, an incredibly invasive procedure.

What if, instead, all they had to do was breathe?

That’s the solution Bean is striving for.

During her postdoctorate research at Dartmouth College, Bean searched for chemicals produced by pseudomonas that could be used to identify it. She found that the infections did, in fact, produce unique chemicals that distinguish them from other bacterial infections.

First, she identified this in cultures and in mouse samples. Then, she was able to identify these chemicals in fluid samples taken from human lungs.

Now, she finally has funding to look for those same identifying chemicals in breath samples. She and her longest-tenured graduated student, Trenton Davis, will be collecting breath samples from 288 patients, ages 3 and older, from five different hospitals throughout the country. Then, they can determine whether the same chemicals that make pseudomonas identifiable in cultures are present in a patient’s breath.

In addition to their research on pseudomonas infections, Davis has been working with the lab’s current bacterial samples to detect differences between early (acute) and chronic infections.

“Typically, if we can catch the bacterium when it is colonized early in the patient, that leads to better outcomes. You have more options for antibiotics you can use,” Davis said. “If the patient has had that bacterium in their lungs for a while, that’s when you start seeing antibiotic resistance and that really cuts back on the choices of therapy you have.”

In another study that’s been submitted to a scientific journal for peer review, Davis found that while the same chemical signatures are present in both early and chronic infections, he found that the abundance of certain chemicals is different.

Bean and her lab hope that, combined, this research will lead to faster and more accurate diagnoses of lung infections in cystic fibrosis patients. This would improve the quality of life and increase life span for patients with this disease.

Ultimately, Bean said it’s the people she works with that makes her research so rewarding.

“These patients have seen the benefits of research during their lifetimes. They get new medicines that help them live longer,” Bean said. “They are so enthusiastic about participating in research studies and they’ll tell you it is the best part of their quarterly doctor’s visits. It’s been a real joy to directly interact with people who my work will benefit.”

The clinical study will be enrolling patients at five participating hospitals through 2021. If you are a patient at one of these facilities and would like to participate, ask your physician for details.

ASU student travels abroad in pursuit of a future career, learns about family’s culture on the way

Arizona State University senior Monica Orillo has been tackling different parts of the world in her pursuit of a future career in international affairs. She is a double major in Southeast Asia studies from the School of Historical, Philosophical and Religious Studies and political science from the School of Politics and Global Studies. Additionally, she is pursuing a minor in German and a certifi...

ASU student travels abroad in pursuit of a future career, learns about family’s culture on the way

Arizona State University senior Monica Orillo has been tackling different parts of the world in her pursuit of a future career in international affairs.

She is a double major in Southeast Asia studies from the School of Historical, Philosophical and Religious Studies and political science from the School of Politics and Global Studies. Additionally, she is pursuing a minor in German and a certificate in teaching English to speakers of other languages. 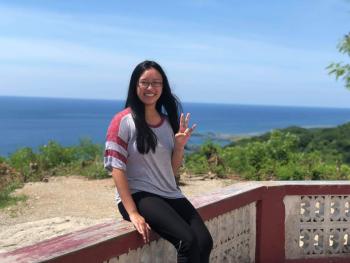 Senior Monica Orillo in the Philippines on a Boren Scholarship. Download Full Image

Not only did she expand her education to include different histories, cultures and languages from across the globe within the classroom, she took herself across the physical world as well.

Orillo studied abroad in Germany while she was in high school. She participated in the U.S. Department of State’s Congress-Bundestag Youth Exchange program for one year and was introduced to a number of other programs related to studying abroad and pursuing a career in the federal government.

As an Arizona resident, Orillo came to ASU because she recognized the opportunity to make her undergraduate studies flexible and her education experience unique.

“I chose political science because I would like to pursue a career in international affairs and I chose Southeast Asia studies because I wanted a chance to learn more about the region from an academic standpoint, since I hadn't previously learned much about the region my family came from in any formal education,” Orillo said.

The degrees offered at ASU allowed her to focus her studies on her passions and allowed her the freedom to study abroad again.

She took one semester to intern in Germany with the U.S. Department of State, but when she came back, she wanted to continue taking her education to different parts of the world.

When she studied abroad in high school, Orillo learned about Boren Scholarships and decided she wanted to apply for one when she got to college. These particular scholarships are an initiative of the National Security Education Program to fund undergraduate students to study languages that are less commonly taught in world regions critical to U.S. interests.

“I contacted the Barrett Office of National Scholarship Advisement about my interest in applying and sent my essay drafts in for review,” Orillo said. “I had an interview with them on campus and after receiving some more feedback, I sent in my application to the Boren committee. The fact that I actually received the Boren was like a dream come true; I'd had my eye set on the program for a long time.”

Orillo has spent the last academic year in the Philippines at a host university for her Boren Scholarship. She took interdisciplinary classes about Philippine art, foreign policy and Southeast Asian environmental history.

“My parents are both from the Philippines and I used this opportunity to learn more about the country's culture and history and get in touch with my family heritage,” said Orillo. “I was also able to reconnect with nearby family members and travel across the country.”

She learned about the U.S.-Philippine relationship from a new perspective while she was traveling.

“It was very interesting to see the long-standing impact of the American colonial period on the country up close; this previous connection between the U.S. and the Philippines was the basis of my Boren essay topic,” Orillo said.

She is now back in the U.S., but as she reflects on the experience, she says her biggest takeaway was learning how diverse the Philippines truly are.

“There are many different cultures in different regions within the Philippines and there are also the added cultures of the Philippine diaspora, who go abroad to the U.S., Australia, Europe, the Middle East, China or elsewhere and bring back with them unique Philippine identities,” Orillo said. “It was so interesting to see how my own Filipino American background fit into all of it.”

For students wanting to pursue studying abroad or a Boren Scholarship specifically, Orillo recommends taking advantage of the resources available here at ASU.

“I would strongly suggest reaching out to Barrett ONSA, even if you are still in the early stages of just considering the program,” Orillo said. “I was initially surprised they were a resource available to me, as I am not a Barrett student. They're very helpful in outlining the process and helping you start to brainstorm topics for the application essays.”

Orillo is set to graduate in May and will be working as a change agent at Changemaker Central in addition to being a student researcher at ASU’s Center on the Future of War during her last year as an undergraduate. Then she will begin the process of applying for jobs to fulfill the Boren national service requirement.

To learn more about the 250-plus study abroad programs in more than 65 different countries offered at ASU, see the Study Abroad Office website.