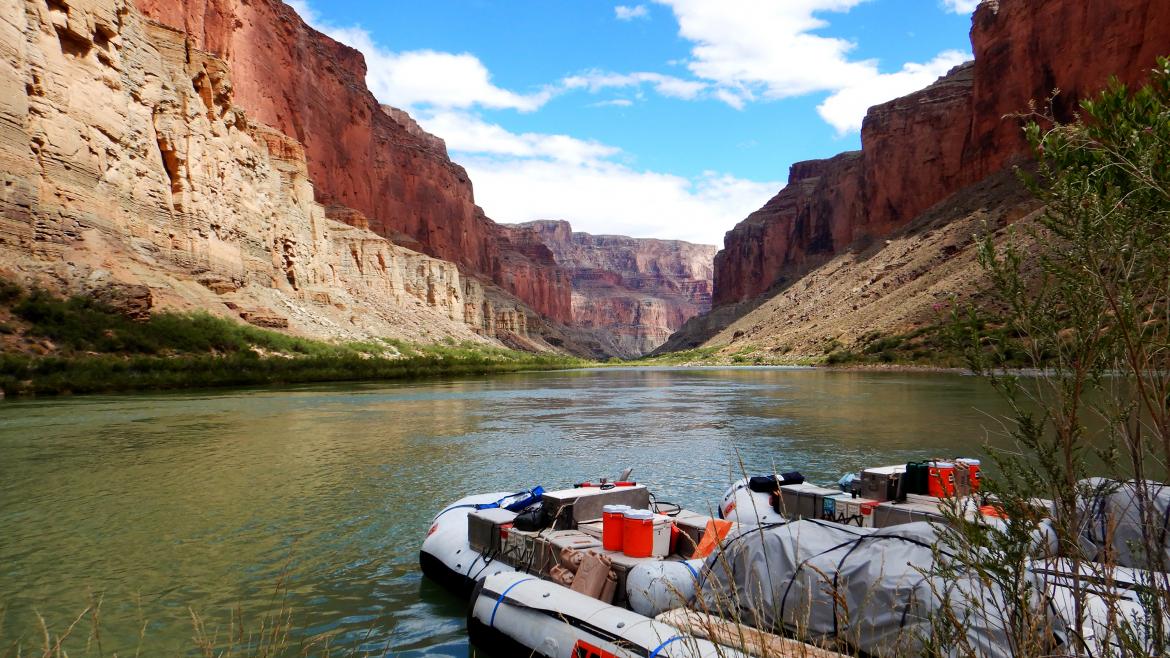 Exploring Grand Canyon geology through the eyes of ASU experts

It’s hard to imagine what the world looked like millions of years ago. But in Arizona, a journey through the Grand Canyon on the Colorado River gives a sense of how it might have felt.

Scientists believe the waterway began etching its path 5 to 6 million years ago to form what is now a mile-deep chasm in the Earth’s surface. But the rock layers it tore into date back 500 million years and encase the fossil remains of ancient life forms that are even older.

For researchers, the marbled canyon walls offer a fractured timeline of its history, from the earliest life forms it hosted to the ancestral remains of indigenous peoples who still inhabit it today.

In May, a Colorado River trip organized by the Institute of Human Origins, a research unit of The College of Liberal Arts and Sciences at Arizona State University, gave some 20 alumni, institute supporters and community members the chance to see that history through the eyes of ASU experts studying it. 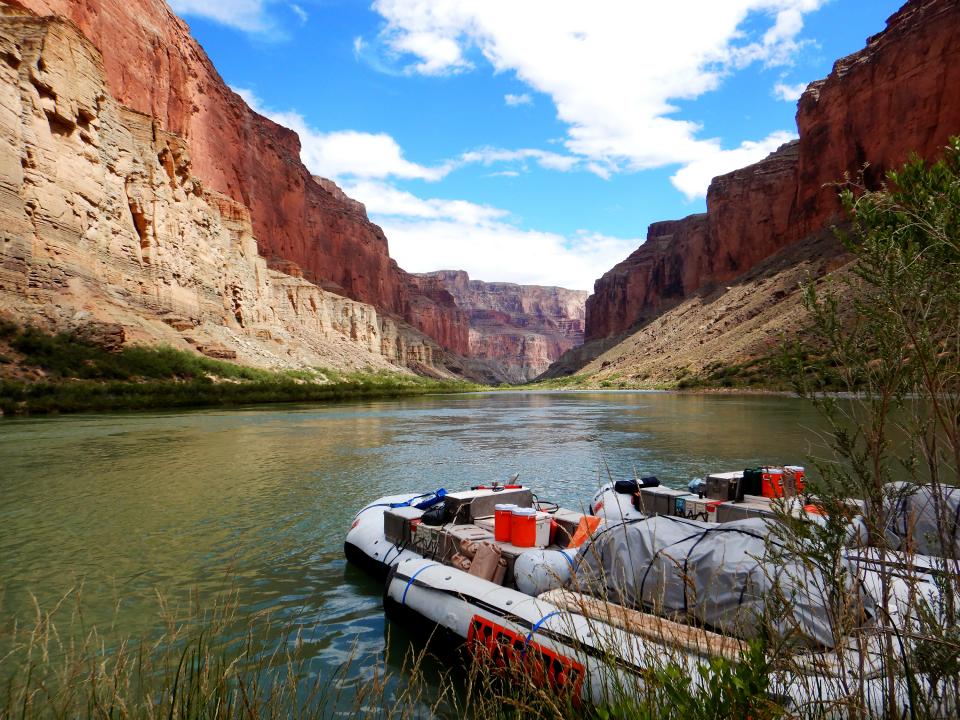 The Grand Canyon draws millions of visitors each year, but a trip with The College's Institute of Human Origins this summer gave visitors a chance to see the site alongside ASU experts. Photo by Julie Russ

Chris Campisano, an associate professor in The College’s School of Human Evolution and Social Change and an institute research associate on the trip, said understanding the Grand Canyon’s makeup serves as a basis to unravel broader quandaries about the geological world at large.

“You have 2 billion years of Earth history there,” Campisano said. “Individual layers of rock piece together to tell a much larger story about how sediments were being deposited in the canyon and speak to a larger framework of what was going on globally at the time.”

Understanding human history from the ground

Campisano was one of two ASU geologists who joined the weeklong river trip to break down the Grand Canyon’s geological significance for passengers. It is the latest destination in a travel outreach program bringing researchers and institute supporters together for trips to archeological hubs around the globe including Tanzania, the Galapagos Islands, Ethiopia and South Africa. Funds generated support the institute’s operations, scholarships and field and laboratory research.

This year’s Grand Canyon journey featured Campisano, an expert in ancient landscapes and evolution, and fellow geologist Ramon Arrowsmith, a professor in The College’s School of Earth and Space Exploration who specializes in geological faults and topography.

William Kimbel, the institute’s director, said faculty lead trips according to their area of expertise and highlight new research happening at the institute.

“All of our trips focus on one aspect of how humans developed on Earth, and put participants in a space with scientists who are able to bring that expertise,” he said. “Organizing a Colorado River trip through the Grand Canyon with two geologists is our way of adding educational value to a journey many have always wanted to take.” 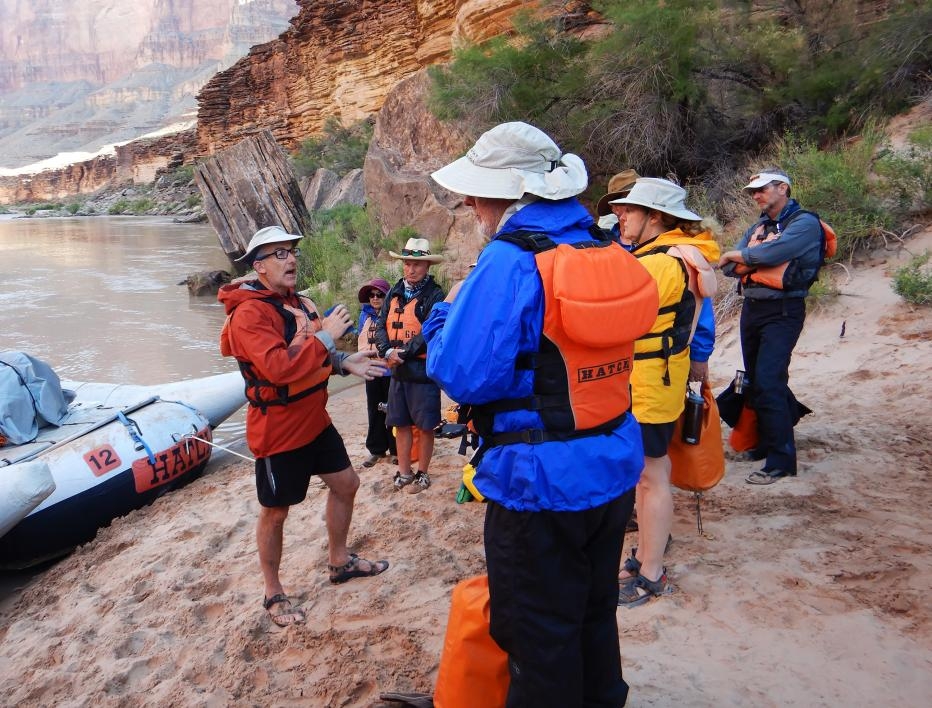 School of Earth and Space Exploration Professor Ramon Arrowsmith describes the geological sites ahead to a group of passengers taking part in the Institute of Human Origins' Colorado River trip last May. 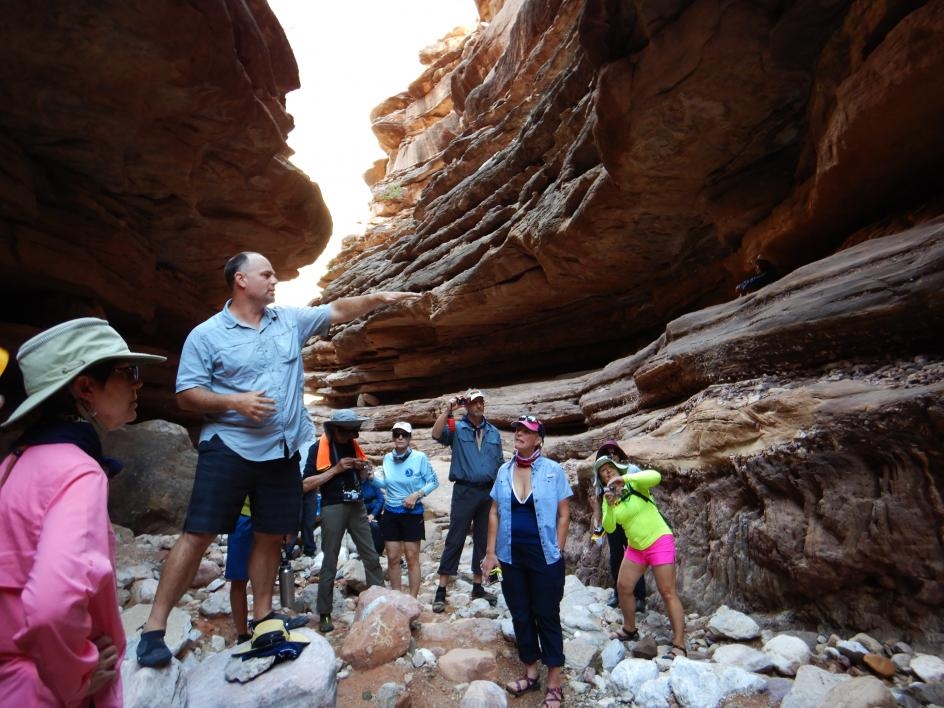 Chris Campisano, an associate professor in The College's School of Human Evolution and Social Change, points out a geological formation on the canyon wall called the Great Unconformity to passengers on the trip. 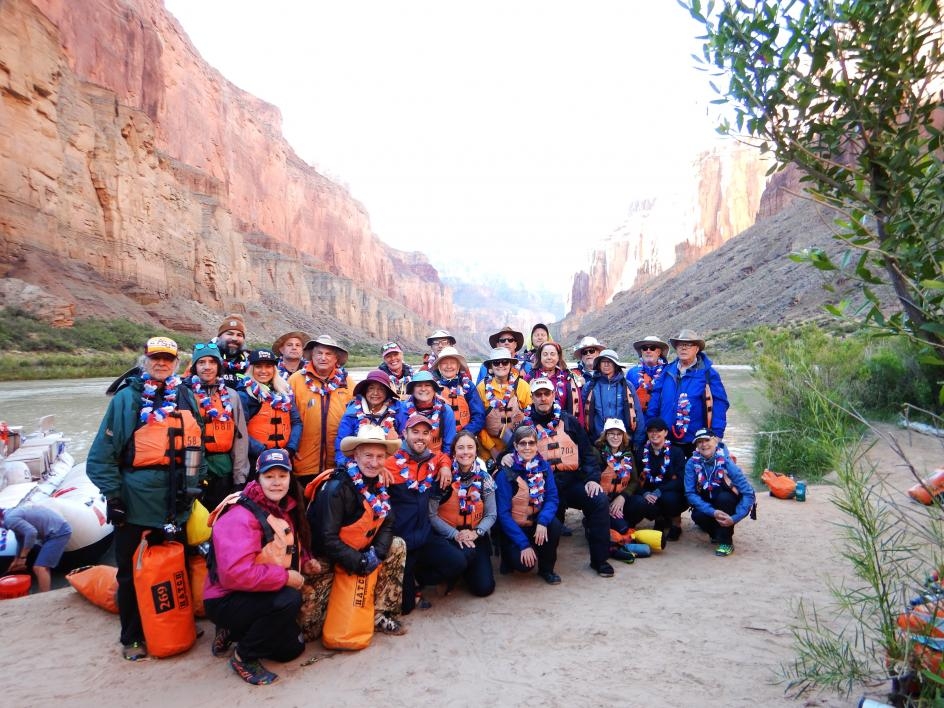 Some 20 ASU alumni, supporters and community members joined the Colorado River trip last May as part of the Institute of Human Origins' outreach and travel program. Expeditions like these have become a legacy for the institute. Paleoanthropologist Donald Johanson Johanson is the Virginia M. Ullman Chair in Human Origins and a professor in the School of Human Evolution and Social Change in the College of Liberal Arts and Sciences.founded the operation in Berkeley, California, in 1981, just seven years after discovering the 3.18 million-year-old remains of Lucy, a fossil hominin thought to be an ancient ancestor to modern humans. He began leading public trips to sites of interest to human origins in the 1980s that continued after the institute moved to ASU in 1997.

“This is an Arizona trip, and I think that makes it available to a larger audience than some of our international trips,” he said.

That was the case for Bryne Broderick, an alumna who graduated with a degree in physical anthropology in 1996, just a year before the institute came to ASU. As an undergraduate, she’d originally wanted to study geology and said taking part in the institute’s expeditions abroad intrigued her, but felt out of reach. Going to the Grand Canyon on this trip was a way to return to a scientific passion she fostered at ASU.

“Listening to Ramon explain the rock layers and the different processes that formed the canyon really tapped into my love of geology, because it provided an actual experience to reference,” said Broderick, who now works as a radiologist in Michigan. “I think it was also special that people on the trip came from so many different walks of life; it spoke to the fact that anyone with an interest in the natural world can feel like they have a place on trips like these.”

For Arrowsmith, the trip was the most recent in a lineup of academic endeavors on the Colorado River that began under the mentorship of the late Troy Péwé, an emeritus professor of geology at ASU who spent decades researching the Grand Canyon.

Not long after Arrowsmith joined ASU as an assistant professor in 1995, Péwé invited him to join an annual river trip for undergraduate students to conduct research. From pointing out fossil-rich slot canyons to identifying walls with rock dating back almost 1 billion years, he said what he learned from Péwé informs the history he relays to new passengers today.

“I think Péwé taught the importance of having that enthusiasm for telling the story of the Grand Canyon on multiple levels; from its geology to the sweeping Earth history that it holds,” he said.

Millions of visitors from around the world visit the site today, which celebrated its centennial as a national monument this year. As part of a public institution in Arizona, Arrowsmith said it’s also important to continue finding ways to educate the public about the geological wonder in their backyards.

“When you meet somebody on the other side of the world and you tell them you live in Arizona, one of the first things they will mention is the Grand Canyon,” he said. “At ASU, we have a responsibility to dig deeper to help people learn more about the natural world and how to preserve it.”

The National Science Foundation defines a postdoctoral scholar as “an individual who has received a doctoral degree and is engaged in a temporary period of mentored training to enhance their professional skills to pursue his or her chosen career path.”Career paths were the subject of the inaugural Arizona State University Postdoc Career Conference held in the Tempe campus Memorial Union on May...

The National Science Foundation defines a postdoctoral scholar as “an individual who has received a doctoral degree and is engaged in a temporary period of mentored training to enhance their professional skills to pursue his or her chosen career path.”

Career paths were the subject of the inaugural Arizona State University Postdoc Career Conference held in the Tempe campus Memorial Union on May 22. 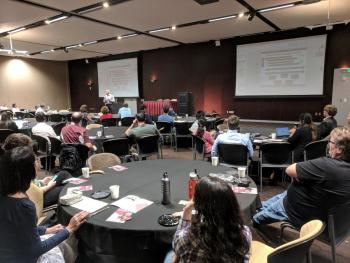 ASU hosted an inaugural career conference for postdocs in the Memorial Union on the Tempe campus on May 22. Download Full Image

The conference kicked off with a keynote address from Josh Henkin, founder of STEM Career Services — a consulting organization that aims to give PhDs and postdocs the skills they need to be successful in their career pursuits. Henkin specializes in helping postdocs transition their mindset from being solely academic and helps them to open themselves up to industry jobs and entrepreneurial ventures that are research-based.

The conference agenda followed a similar philosophy, offering sessions and featuring speakers on topics ranging from entrepreneurial startups to academic startup negotiations and everything in between. Many of the presenters at the conference were ASU faculty who themselves had been postdocs. Other presenters were former postdocs who are now working for companies like Medtronic and Honeywell.

“I think it is really important that we try to keep these talented individuals in the Valley,” postdoc office manager Wiley Larsen said. “We’re not trying to crush their dream of becoming a professor, but we do want them to be aware of the opportunities and benefits of working for these local companies, or starting a company of their own.”

One of the challenges of being a postdoctoral scholar is that about 70% of postdocs aim to become tenure-track faculty, but only enough academic positions are available to satisfy about 15% of PhD earners. The ASU Postdoctoral Affairs Office is working to provide training and resources to help postdocs be more competitive on the job market. Part of this strategy includes the one-day annual career conference. The Postdoc Office also provides weekly opportunities to gather for Lunch & Learns, Coffee Breaks and Social Mixers.

The Postdoc Office launched in January 2018 and is housed in the Graduate College, supported by the Graduate Initiatives team. To learn more, visit graduate.asu.edu/postdocs. Dr. Clifford Folmes, from Mayo Clinic, and Jeremy Mills, an assistant professor in ASU's School of Molecular Sciences, discuss academic job interviews during one of the sessions. 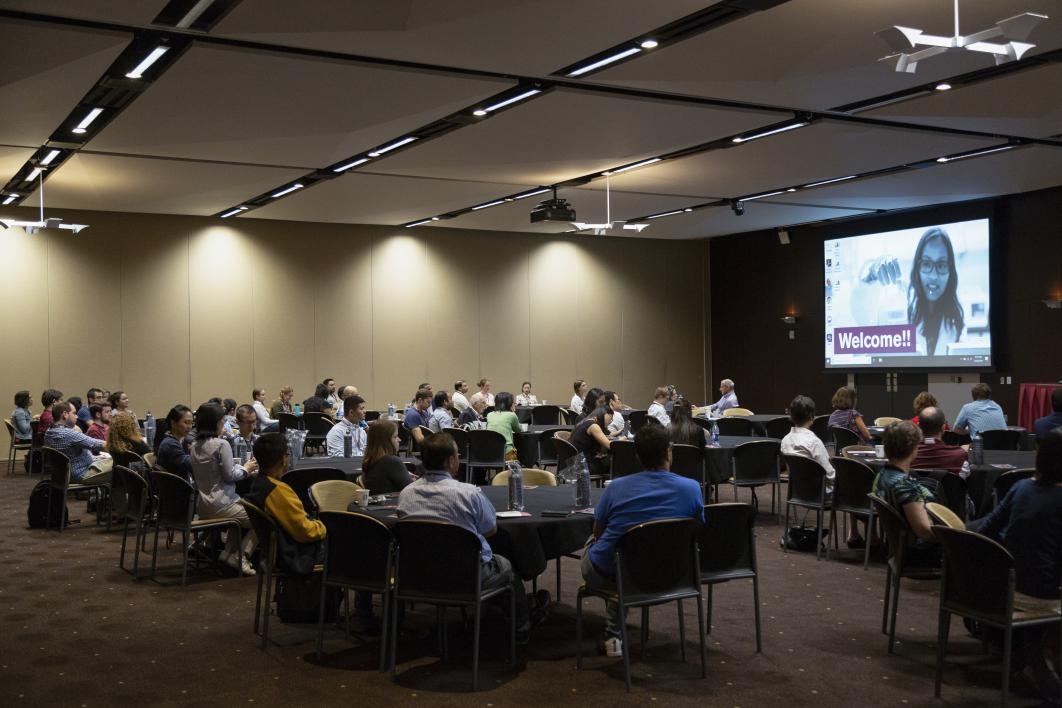 About 100 postdocs from ASU, Mayo Clinic and the University of Arizona attended the conference. 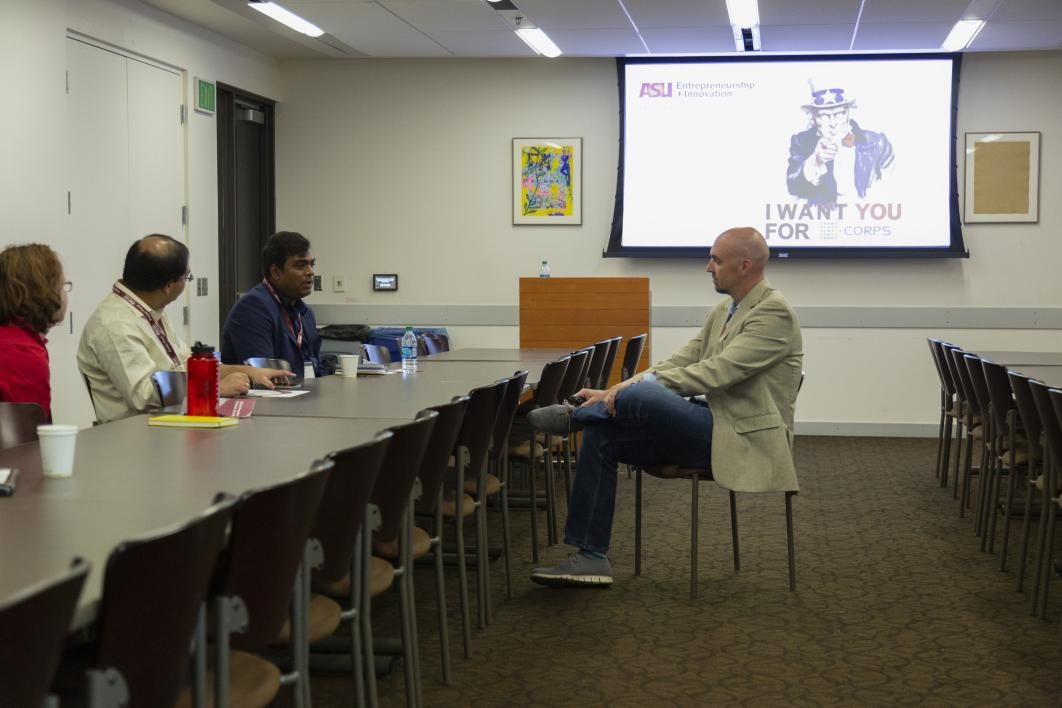 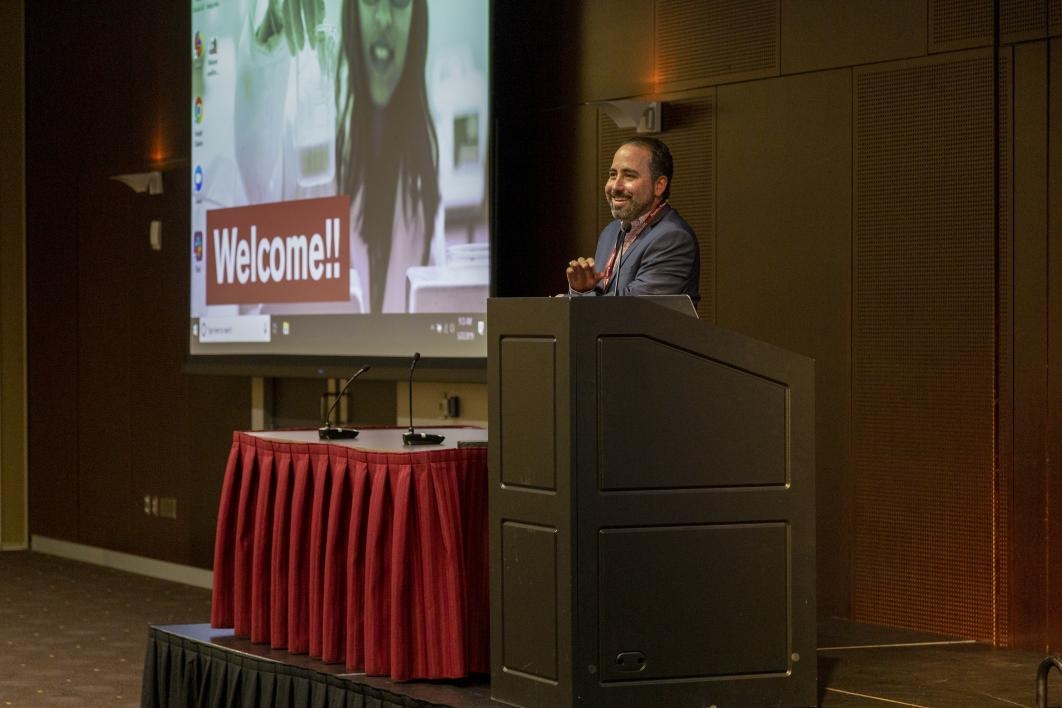 Enrique Vivoni, associate dean of academic initiatives in the Graduate College, welcomes postdocs to the event. Hope Lancaster, a postdoctoral associate in the Department of Speech and Hearing Science, leads a workshop during the postdoc conference. Josh Henkin, the event’s keynote speaker, talked about the unpredictability of most people’s career paths. 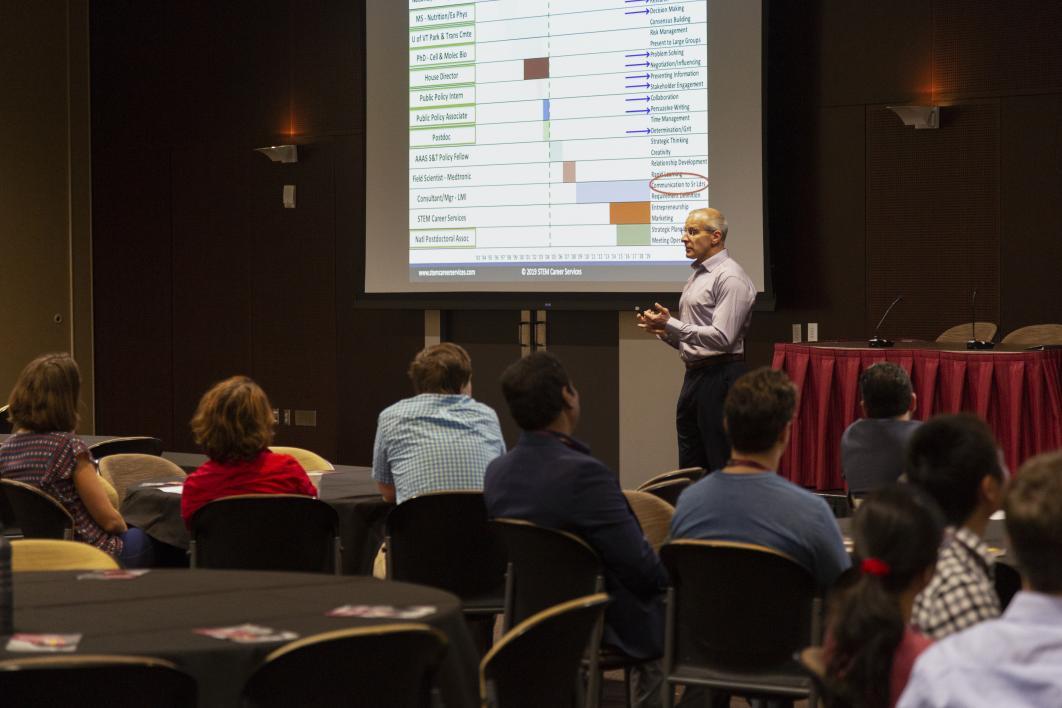 Henkin presents during the Postdoc Career Conference on May 22. Postdocs enjoy breakfast and networking while waiting for the conference to begin.