A Biodesign Institute research group has received a three-year, $2.3 million grant from NASA to study and characterize the risks posed by microorganisms to the health of astronauts.

Cheryl Nickerson of the Biodesign Center for Fundamental and Applied Microbiomics and professor at Arizona State University’s School of Life Sciences will be leading the ASU team. Nickerson, a 20-year veteran in the field of infectious disease in microgravity environments, has participated in nine separate NASA spaceflight missions. She partners with ASU Biodesign assistant research professor Jennifer Barrila and Mark Ott, one of NASA’s top microbiologists and the overall project lead at NASA Johnson Space Center. 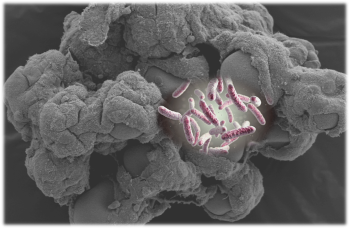 The International Space Station (ISS), where the astronauts spend their time, is considered an extreme environment. To explain, the station is in a perpetual state of freefall toward Earth that is only offset by the speed of the station moving at a clip of 17,000 mph. These two opposing forces allow the station to remain in orbit and create the extreme environment known as microgravity. Understanding the response of microbes and tissues in microgravity affords novel insight into how they behave normally. Even more valuable, the extreme environment teaches us how microbes transition to disease states that can be unclear under normal conditions on Earth, where the force of gravity can mask some cellular responses. This work will provide fresh insight into disease processes, including infectious disease mechanisms and immune cell responses to infection.

Studies over the past 50 years have shown that culturing cells (human or microbial) in the spaceflight environment alters them in unexpected ways. For example, certain cells show changes in growth, size, shape, differentiation, antibiotic resistance, biofilm formation and function. In a landmark experiment, Nickerson’s team showed that when cultured in spaceflight, the human foodborne pathogen salmonella significantly altered its gene expression and increased its virulence (ability to cause disease). The team also discovered a specific gene regulator used by salmonella and several other pathogens to regulate their responses to the microgravity environment of spaceflight. These findings are especially concerning regarding infectious disease risks, given that the immune response of astronauts is compromised during spaceflight.

Humans exposed to space travel are found to experience a myriad of issues with their immune systems. These include reduced function and distribution of some immune cells, changes in inflammation and reactivation of latent viruses such as herpes virus. Due to the complexity of virulence studies in microgravity, very few microorganisms have been evaluated in infectious disease studies, and salmonella is currently the only pathogen whose virulence has been shown to change in spaceflight. Accordingly, NASA is concerned with the likelihood of other pathogens that could compromise crew health. Nickerson explains, “The goal of the current study is to conduct comprehensive tests to gain insight into the breadth of other medically-significant ISS microorganisms that have altered virulence and the impact of those changes on the immune response of the host, including astronaut immune cells.” 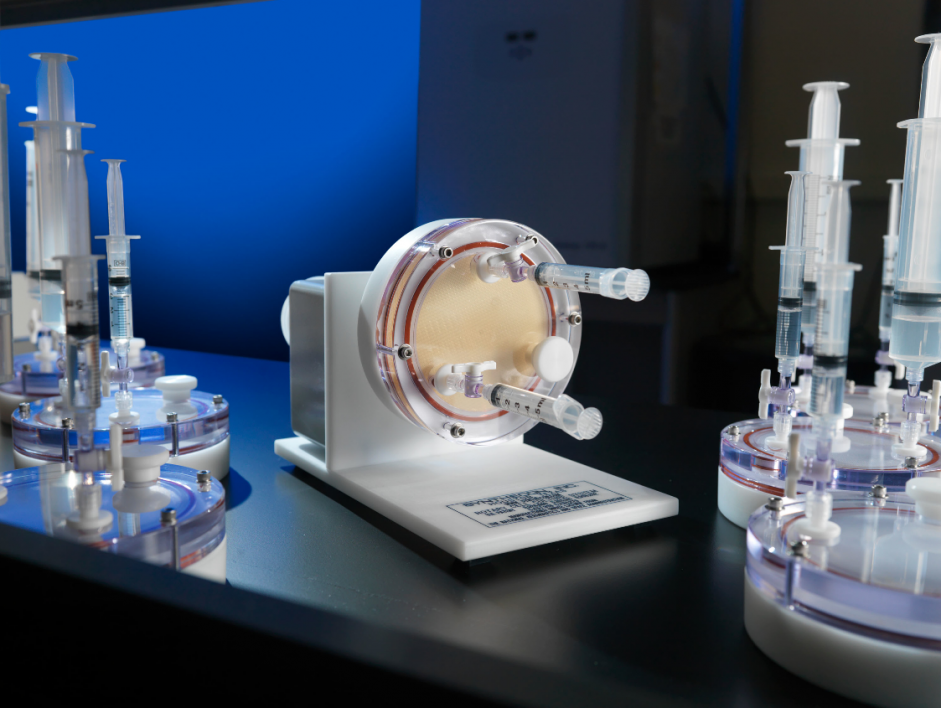 A NASA-designed rotating-wall-vessel-bioreactor will be used as a spaceflight analog culture system in which to grow the bacterial pathogens and the 3D tissue culture models for this study. 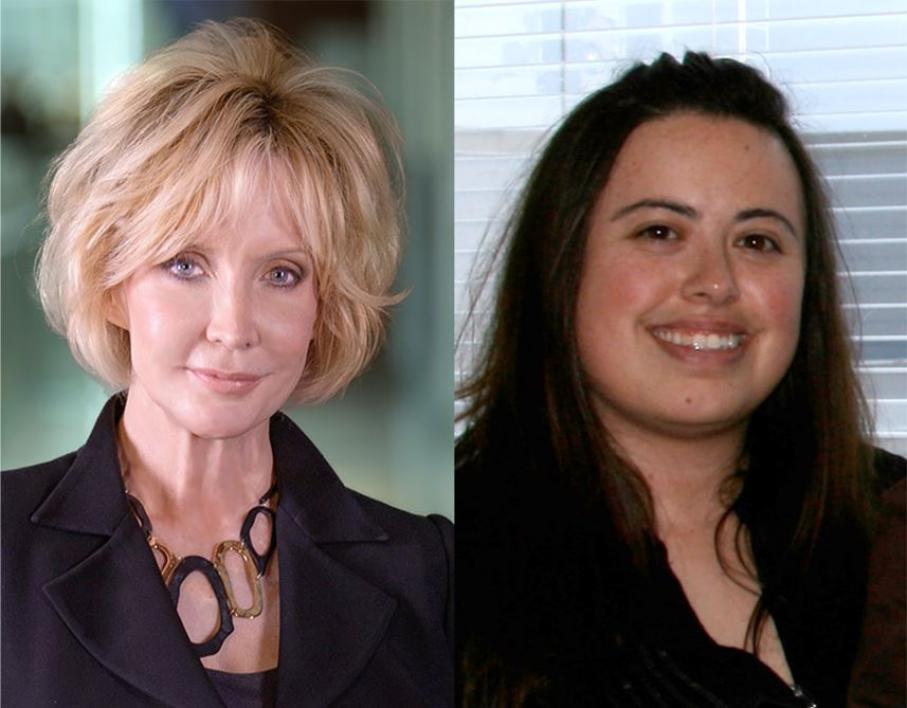 Biodesign Center researchers Cheryl Nickerson and Jennifer Barrila are partnering up with NASA Johnson Space Center to study how to mitigate the risk of virulence for space travelers.

Although NASA takes extreme precautions to avoid crew health risks, infectious disease incidences have been reported on spaceflight missions. Therefore, just as they do with any risk, NASA must gain a proper understanding of any possible outcome of that risk. This avoids potential catastrophes in space. NASA does so with analog testing. Analog testing, grounded here on Earth, uses instrumentation and equipment that can simulate some spaceflight conditions. Nickerson’s team cultivates the pathogenic microbes in bioreactors that can both mimic aspects of the microgravity environment as well as simulate conditions experienced by tissues in our bodies and pathogens that infect those tissues.  Specifically, these space analog bioreactors mimic the low fluid force conditions (called fluid shear) encountered by cells in these environments.

Nickerson and her team will be providing a virulence risk profile for a range of pathogens that NASA is concerned about. In the study, the pathogenic microbes will be exposed to a variety of stressors that may be encountered when infecting a host. Nickerson explains, “We are testing the ability for spaceflight analog grown pathogens to resist stresses that your body throws at them during infection, and then we ask can they be effectively killed?” In addition, the ability of these pathogens to infect both 3D tissue culture models (also produced in analog conditions) that contain immune cells and astronaut blood will also be investigated.

“This grant leverages from all of the biomedical work that we have completed with NASA in the past," Nickerson said. "These studies are specifically designed to help chart NASA's mission for what kind of infectious disease health risks might occur during human exploration missions to the moon and Mars."

As International Women in Engineering Day on June 23 approaches, two female biomedical engineering students at Arizona State University are preparing to debut a biomedical device on a world stage in London. Mariam El Sheikha and Kelsey Boos are members of one of three ASU engineering teams headed to London this summer to advance their projects during the PLuS Engineering Summer School, then prese... As International Women in Engineering Day on June 23 approaches, two female biomedical engineering students at Arizona State University are preparing to debut a biomedical device on a world stage in London.

Mariam El Sheikha and Kelsey Boos are members of one of three ASU engineering teams headed to London this summer to advance their projects during the PLuS Engineering Summer School, then present them at an international showcase event. Their device is designed to speed upper limb function recovery for stroke patients. 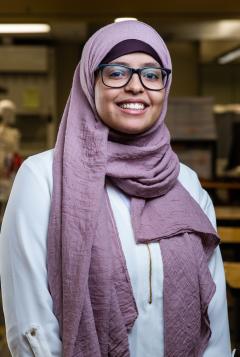 El Sheikha and Boos are traveling the course to medical school by way of biomedical engineering degrees — when they’re not preparing for their trip to London this summer, they are studying for their Medical College Admission Tests. Their project, the design and initial development of a therapeutic medical device that enhances physical therapy for stroke victims, serves as the perfect gateway between biomedical engineering and medicine.

El Sheikha was drawn to the biomedical path, and particularly this project, because of her grandfather. When he suffered a stroke in Egypt, “not only did he not have access to the biomedical devices we have in the U.S., he didn’t have access to comprehensive physical therapy,” El Sheikha said. “I wanted to do something that will help people’s lives.”

Kelsey Boos has always wanted go to medical school, and while she initially thought she would focus on pediatrics, her experiences in biomed have her considering an alternative path. Her roommates have careers as biomedical engineers who design and develop medical devices. “I can see myself working in those environments,” she said.

The women were part of a bioengineering interdisciplinary product development team (IPDT) for a class focused on the fundamentals of developing and bringing to market a biomedical device using best industry practices and an entrepreneurial mindset, including ethics, FDA regulatory processes and business practices.

The team assignment was based on a relatively new stroke therapy that uses a surgically implanted vagus nerve stimulation (VNS) device to enhance physical therapy after stroke. According to recent studies, VNS in concert with therapy can as much as double upper limb function recovery. 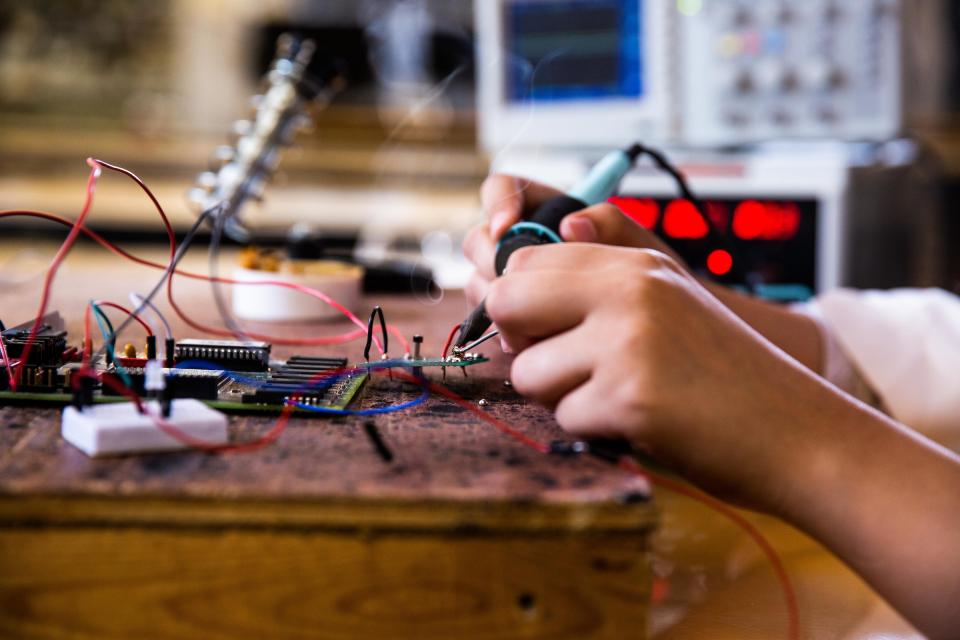 The students will present their project this July during the PLuS Engineering Summer School Showcase. Photo by Deanna Dent/ASU Now

“When stroke causes damage to the brain, repetitive physical therapy supports neural plasticity — a reorganization of neural circuits which, over time, assigns lost functions to new pathways and ultimately improves motor function,” explained Jeffrey Kleim, a Ira A. Fulton Schools of Engineering associate professor of biological and health systems engineering who conducts neuroplasticity research and is one of the course instructors.

“For example, when a patient tries to grasp an object, the old neural pathways no longer effectively connect to that action. VNS provides much needed extra neurotransmitters that drive neural plasticity to help reorganize brain function,” Kleim said.

“This promising clinical trial research result may be more practically translated in the clinic, and especially at the point-of-care, if a technology can be developed that allows the patient to self-direct (at home) therapy in addition to clinical guidance,” explained Vincent Pizziconi, an associate professor of biological and health systems engineering and director of the bioengineering design center. Pizziconi also is a course instructor. 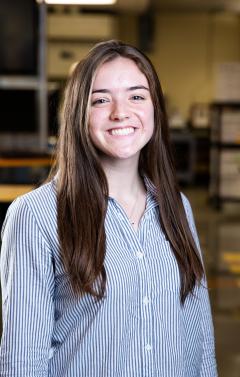 The challenge presented to the BME design class was to develop a low cost, noninvasive (nonsurgical), self-directed device that would facilitate at-home VNS therapy for stroke patients that would speed recovery and function — while reducing treatment costs and minimizing adverse events associated with implantable VNS devices.

In addition, a key product specification required for home use involved an ergonomic, or human factor consideration, such as ease of use.

The resulting, external device stimulates the vagus nerve through its auricular branch, which is located in the ear. In addition to triggering additional neurotransmitters, “there’s a closed feedback loop that ensures the patient is performing the motion correctly,” El Sheikha said. “The nerve is stimulated only during the correct therapeutic movements.”

The device itself mimics current earpiece models and is positioned in a way that won’t be displaced by movement or impede physical therapy. A built-in motion detector is used to signal the stimulation electrode.

El Sheikha, a member of the electrodes design team, developed the electrode circuit design for the earpiece. Boos, the section leader for systems integration team, designed an earpiece that accurately targeted the auricular branch of the vagus nerve for stimulation, while also guiding her team in the integration of Xbox Kinect technology.

According to Pizziconi, the novel concept of using Kinect technology has the potential to set the project apart from other medtech competitors.

“It was a valuable learning process to see that it could be done with multiple groups of people,” Boos said about the process that had teammates working in their assigned areas before coming together to integrate all of the components.

For El Sheikha, the process has been an opportunity to familiarize herself with tools she’ll be using as a physician. “As a doctor, it’s important to investigate how you can improve a device and provide feedback to the technology developers,” she said.

Both women are looking forward to sharing the project in London and getting feedback from international perspectives.

Top photo: Mariam El Sheikha and Kelsey Boos work on the work on their stroke rehabilitation device at the Schwada building on June 12, 2019. Photo by Deanna Dent/ASU Now