She interviewed with the firm when she was a second-year law student, was hired as a summer associate and has been there ever since. In addition to managing partner, she also leads Gammage & Burnham’s health care practice group. 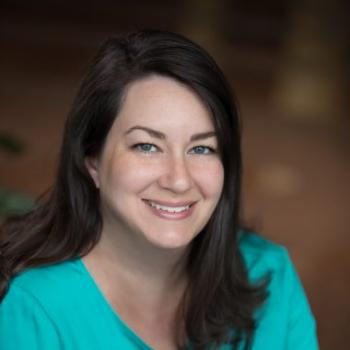 “I’m grateful for the leadership roles that I’ve been given the opportunity to take on,” she said, noting that she is also thankful to be working at a firm with such a well-known and respected health care practice.

An Arizona native, she grew up in Tucson and attended ASU as an undergrad, majoring in biomedical engineering. Around her junior year, she decided that she wanted to go to law school — and that ASU, centered in Phoenix’s thriving legal community, continued to offer the best opportunity.

“I knew I wanted to stay in Arizona and loved ASU and being in Phoenix,” she said. “The majority of the legal jobs also seemed to be in Phoenix, so it made sense to be here for school.”

She didn’t know what to expect from law school, but right away, she discovered it was going to be very different from her undergrad experience.

“My first class was with Professor Michael Berch, who was a force of nature!” she said. “Certainly a change of pace from engineering classes!”

Boysel, however, says it was in her engineering studies that she began developing the analytical and problem-solving skills that turned out to be “good training for a law career.”

Throughout her time at ASU Law, she found the everyday classroom discussions fascinating. She had a dual interest in patent law and health care law but ultimately found the latter to be a better fit.

Her career achievements have landed her on the 2019 Phoenix Business Journal "40 Under 40” list, which recognizes 40 of the most accomplished young executives in the Phoenix metro area who are making a difference both in their organizations and the community. Boysel is one of two ASU Law alums on this year’s list, joining Ahron Cohen, a 2010 graduate who is now president and CEO of the Arizona Coyotes.

A Phoenix resident, she is married with two young daughters and enjoys traveling in her free time. In fact, she was just getting off a plane for a vacation in Amsterdam when she saw an email notifying her of the 40 Under 40 recognition.

“It was certainly unexpected and a great start to my trip!” she said. “It is such an honor to be in a list with so many other extremely talented individuals.”

Like others on the list, she is thankful for the opportunities that have allowed her to achieve what she has at a relatively young age. And she looks forward to continuing to grow with Gammage & Burnham.

“I’m focused on ensuring that this firm, which has given me so much, continues on for many decades to come.”

ASU Law grad leading an NHL revival in the desert

Less than a decade after graduating from the Sandra Day O’Connor College of Law at Arizona State University, Ahron Cohen is leading a dramatic turnaround for the Arizona Coyotes.The 35-year-old Cohen, who previously served as general counsel for the Coyotes, was named the NHL franchise’s president and CEO in July 2018. Although they missed out on a playoff berth in Cohen’s first year at the ...

ASU Law grad leading an NHL revival in the desert

Less than a decade after graduating from the Sandra Day O’Connor College of Law at Arizona State University, Ahron Cohen is leading a dramatic turnaround for the Arizona Coyotes.

The 35-year-old Cohen, who previously served as general counsel for the Coyotes, was named the NHL franchise’s president and CEO in July 2018. Although they missed out on a playoff berth in Cohen’s first year at the helm, the Coyotes just completed a 39-35-8 season — the most wins they’ve recorded since the 2011-12 season, when they won 42 regular-season games and made a magical run to the Western Conference Finals. 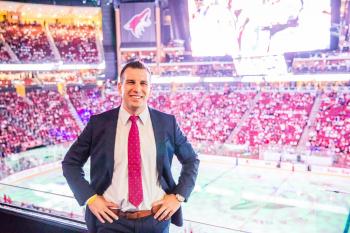 It’s an accomplishment that helped land Cohen on this year’s Phoenix Business Journal “40 Under 40” list, which recognizes 40 young executives in the Phoenix metro area who are making a difference both in their organizations and the community. He is one of two ASU Law alums on the list, joined by Heather Boysel (2007), who was recently named managing partner at Phoenix law firm Gammage & Burnham.

Cohen said the 40 Under 40 recognition is more of a team honor than an individual one, crediting the amazing support he has at home and on the job.

“There are a lot of people who are responsible for this,” he said. “First and foremost is my wonderful family, who’s incredibly supportive. Second is my family with the Coyotes, both people who work for me, as well as our entire Coyotes community, for recognizing our message and what we're trying to do. So it's really because of my family at home and my family at work. I owe it all to them.”

Like all members of the 40 Under 40 club, Cohen stands out for how quickly he ascended to the pinnacle of his profession. It’s a journey that began growing up in Minnesota, where he fell in love with sports. Specifically as a football and basketball player.

“Surprisingly, no hockey,” he said with a laugh. “I was the one person in Minnesota, I think, who didn’t play any hockey.”

He went on to play collegiate football at Bowdoin College in Maine, where he also studied government and economics.

“I certainly realized during my time there that I wasn’t going to be playing on Sundays, so I was looking for other opportunities to stay involved in sports, and that’s what led me to law school,” he said.

After graduating from Bowdoin, he made a trip to Arizona to see his hometown Minnesota Golden Gophers play in the Insight Bowl at Sun Devil Stadium. That sparked an interest in ASU and the Phoenix area, and although he had been focused on law schools in the Northeast and Midwest, he began looking into ASU Law.

Although ASU now runs a groundbreaking Master of Sports Law and Business program — something Cohen would have been highly interested in — the school had no specific sports law program at the time. Still, ASU Law’s administration sold Cohen on all the opportunities the Phoenix area offers, as a year-round hotbed of high-profile sporting events. And the law school’s dean at the time, Patricia White, had something else to offer: She was friends with Kevin Warren, a Phoenix native with ASU ties who was working as the general counsel for the Minnesota Vikings.

The possibility of an internship with Warren and the Vikings was a dream a Minnesota sports fan couldn’t pass up and helped seal Cohen’s decision to come to ASU Law.

He said he knocked on the dean’s door on Day 1 to follow up about the internship, got it, and that set in motion a series of events that led to where he is today.

“I worked for the Vikings throughout law school and after law school, and that’s what really propelled me into the sports world,” he said. “It’s all thanks to ASU.”

Warren, who was recently named commissioner of the Big Ten Conference, advised Cohen at the time that if he wanted to advance in the sports industry, the best thing he could do is hone his skills as an attorney at a large law firm. So Cohen joined the Snell & Wilmer office in Phoenix as a corporate attorney, and tried to get involved with as many sports issues as he could. That included the Super Bowl host committee, as well as representing the Coyotes ownership group when they purchased the team in 2013.

That work with the Coyotes led to an opportunity two years later to join the team as general counsel, and from there, he quickly climbed to his current role. Now at the top of his profession at the relatively young age of 35, where does Cohen go from here?

“First off, I’ll say this: I don’t feel too young,” he said. “There’s a lot of work, so I’m getting my fair share of gray hairs. But right now, my career goal is just solely focused on turning the Coyotes into a model sports organization, making this a great franchise.”

He said the biggest challenge of the job is that there’s always more work that can be done.

But that challenge is also the job’s biggest reward.

“The thing I enjoy most is the opportunity to be a builder and really help grow this franchise into a model sports organization,” he said. “Every single day, when I go to bed at night, and when I wake up, there's always more that we can do. And we can always take a positive step forward and be better today than we were yesterday. And that’s the excitement for me. There are a lot of positions out there where the status quo is acceptable. That's not the case for us. So I love that opportunity of continuing to grow and build something and develop it into something great.”

Being the president and CEO of the Coyotes is a full-time job and then some.

“There’s not too much free time these days,” Cohen said.

But when there is, he loves spending it with his wife and two young sons. They enjoy any type of exercise that lets them enjoy Arizona’s unique and beautiful scenery. And after all those years staying off skates in Minnesota, what is a favorite activity for the now desert-dwelling NHL executive and his boys?