The Arizona State University-led mast-mounted camera system for NASA’s Mars 2020 rover mission, "Mastcam-Z," achieved a major milestone recently when the instrument was delivered to NASA’s Jet Propulsion Laboratory, and the cameras were officially installed on the rover’s mast.

Mastcam-Z is a dual camera system that can zoom in (hence the "Z"), focus and take 3D pictures and panoramas at a variety of scales. This will allow the Mars 2020 rover to provide a detailed examination of both close and distant objects on Mars. 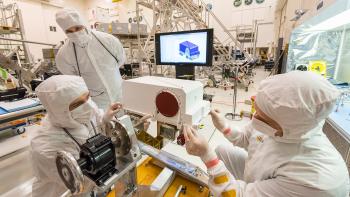 In the assembly facility's Bay 1 cleanroom at the Jet Propulsion Laboratory in Pasadena, California, engineers re-install the cover to the remote sending mast after integrating the two Mastcam-Z high-definition cameras. Visible below the red lens cover is the left Mastcam-Z camera (with the "Remove Before Flight" labels); support equipment blocks the right Mastcam-Z from view. The mast and its twin cameras were installed on the rover's deck the first week of June 2019. Photo by NASA/JPL Download Full Image

The two cameras are now mounted on the Mars 2020 rover mast at the eye level of a 6-foot-6-inch person. They are separated by 9.5 inches to provide stereo vision and they will produce images of color quality similar to that of a consumer digital HD camera (2 megapixels).

“It's a bittersweet feeling for our team, kind of like sending a child off to college, because we'll never be as close to them as we have been over the past few years,” Bell said. “During testing and calibration we showed that the cameras work spectacularly well — meeting or exceeding all of their performance requirements. Now they are heading off to their new home high atop the Mars 2020 rover, which will soon head off to its new home — Jezero crater, on Mars.”

The cameras are designed to help other Mars 2020 experiments on the rover by looking at the whole landscape and identifying rocks and soil (regolith) that deserve a closer look by other instruments. They will also spot important rocks for the rover to sample and cache on the surface of Mars, for eventual return to Earth by a future mission.

The cameras are now in “ATLO” which stands for Assembly, Test and Launch Operations. This phase of the Mars 2020 mission is where the rover is assembled, tested and prepared for launch.

“It was a surreal experience to see these cameras follow in the footsteps of so many great instruments and missions,” said Andy Winhold, ASU Mastcam-Z calibration engineer. “To know that the cameras were bound for JPL's Spacecraft Assembly Facility where the Mars 2020 rover is being assembled adds a historical and human significance to the whole experience. The facility itself is just a giant room stocked with tools and engineers, but when you bring in the hard work, care and passion of all those involved, the process carries a weight you can feel.” A photo taken by one of the flight cameras shows, left to right: Andy Winhold, Justin Maki, Jim Bell and Alex Hayes. Bell is holding a mirror reflecting the faces of additional team members looking into the cleanroom window from the data analysis room outside. 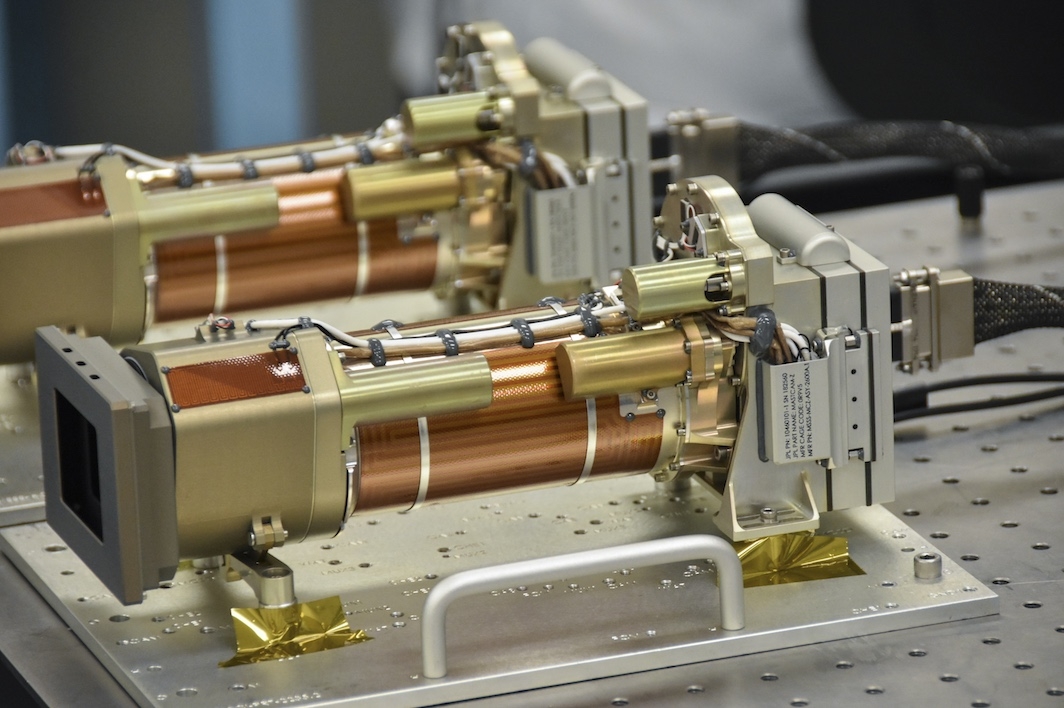 In the foreground is the flight Mastcam-Z camera that will be the "right eye" of the rover. The "left eye" (identical from the outside, but with different color filters inside) is in the background. Each camera is about the size of a typical tennis ball canister. 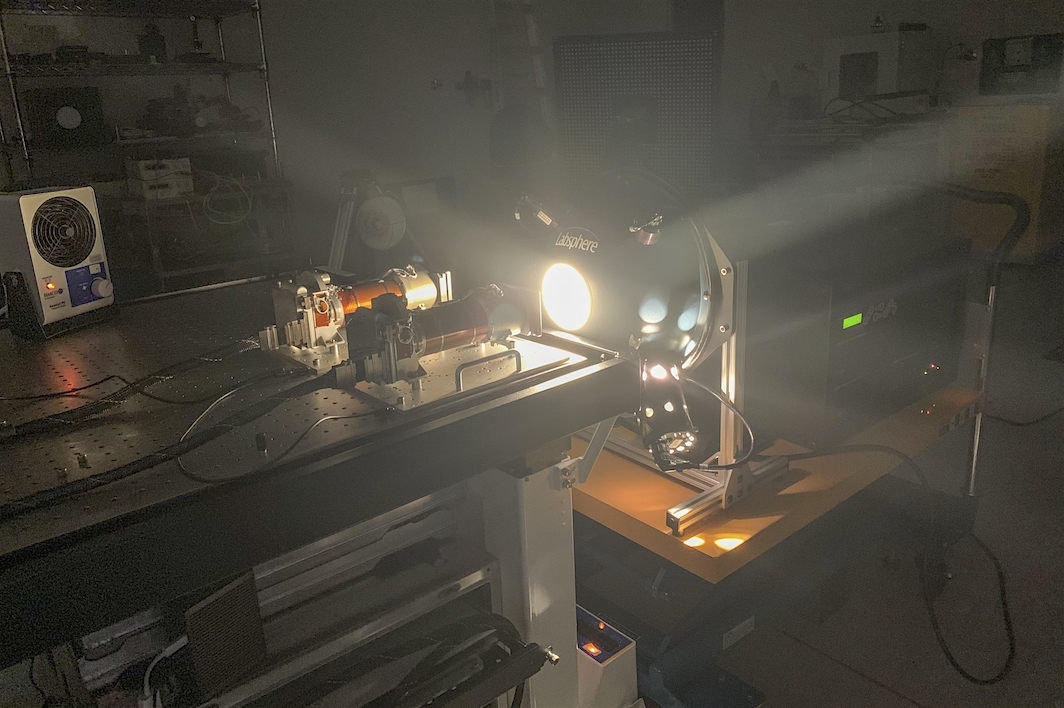 One of the flight Mastcam-Z cameras is taking photos of a test device called an integrating sphere. This device is designed to send a highly uniform light of a well-calibrated amplitude into each camera, so the team can determine its sensitivity accurately. The brightness is set to the same level expected for typical sunlit scenes on Mars. Using its 34mm wide-angle zoom setting, the Mastcam-Z flight left camera took a photo of the GeoBoard. This carries an assortment of calibration targets, plus geologic samples chosen for color and texture. The goal is to put the cameras' capabilities to the test. The GeoBoard is about as far away from the camera as typical outcrop rocks might be on Mars. Here the camera's 100mm telephoto zoom setting provides a high-resolution photo showing part of the GeoBoard. This gives an example of the expected image quality for nearby rocks, soils, layers and outcrops on Mars with the camera near its highest zoom resolution. 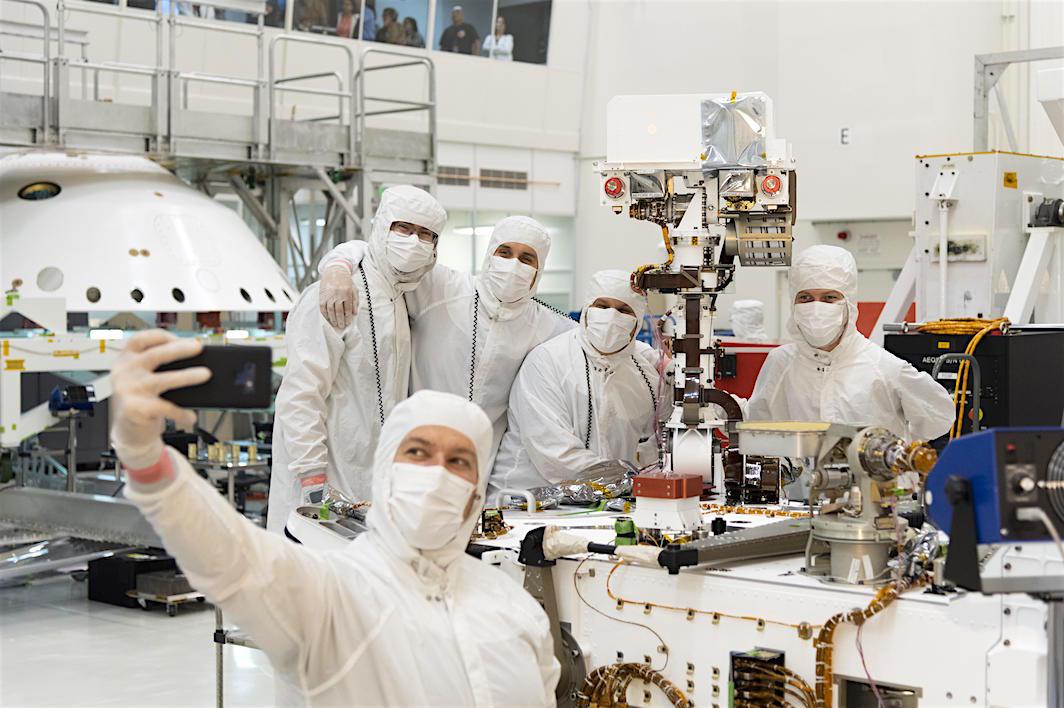 On June 5, 2019, engineers and technicians take a moment after attaching the remote sensing mast to the Mars 2020 rover in the spacecraft assembly facility's High Bay 1 cleanroom at the Jet Propulsion Laboratory.

In addition, scientists and engineers from the University of Copenhagen in Denmark have been responsible for the design and testing of the Mastcam-Z calibration targets, which were recently delivered to JPL and will be mounted onto the rover's deck in the next few weeks.

“We first dreamed up the Mastcam-Z cameras more than six years ago when we sent in our proposal to NASA,” Bell said. “Initially the cameras existed only as PowerPoint slides, CAD models and spreadsheets. Then, with this team, the cameras started becoming real, physical objects that we could take real photos with. Now we've reached the next step, delivering them to JPL to be mounted on the rover.”

About the Mars 2020 Mission

Mars 2020 will launch from Cape Canaveral Air Force Station in Florida in July 2020, landing on Mars in Jezero Crater in February 2021. The mission is expected to last at least one Mars year (687 Earth days). JPL is building and will manage operations of the Mars 2020 rover for the NASA Science Mission Directorate at the agency's headquarters in Washington.

The mission is part of NASA's Mars Exploration Program, a long-term effort of robotic exploration of the Red Planet. The mission addresses high-priority science goals for Mars exploration, including key questions about the potential for life on Mars. The mission also seeks to gather knowledge and to demonstrate technologies that address the challenges of future human expeditions to Mars. These include testing a method for producing oxygen from the Martian atmosphere, identifying other resources (such as subsurface water), improving landing techniques, and characterizing weather, dust and other potential environmental conditions that could affect future astronauts living and working on Mars.

As a transgender woman and first-generation student from the Navajo community of Teec Nos Pos in northeastern Arizona, Arizona State University alumna Trudie Jackson is used to forging her own way. Today, she holds concurrent bachelor’s degrees in American Indian studies from The College of Liberal Arts and Sciences, and public service and public policy from the Watts College of Public Service a...

The College of Liberal Arts and Sciences , Space exploration

As a transgender woman and first-generation student from the Navajo community of Teec Nos Pos in northeastern Arizona, Arizona State University alumna Trudie Jackson is used to forging her own way.

Today, she holds concurrent bachelor’s degrees in American Indian studies from The College of Liberal Arts and Sciences, and public service and public policy from the Watts College of Public Service and Community Solutions, and a master’s degree in tribal leadership and governance from The College’s American Indian studies program. But the road hasn’t been easy. 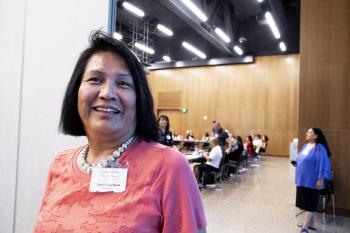 “Native students balance being in a Western educational institution and coming from a tribal community,” she said. “Part of going to school is just learning sometimes you had to make sacrifices — you may not be able to engage in a ceremonial event back in your community, for example, because you have a paper due.”

Learning to navigate those challenges is what led her to attend Graduate Pathways ahead of her master’s degree track a few years ago. Organized by American Indian Student Support Services (AISSS), the biennial conference helps Native American undergraduates and alumni learn more about advanced degrees and application processes.

Now pursuing a doctorate at the University of New Mexico, Jackson returned to campus this month to share her experiences with a new generation of postsecondary-bound indigenous students at the 2019 Graduate Pathways. “You may encounter professors who have never had a Native student, but that’s actually where you have the chance to share your knowledge,” Jackson said, speaking to a crowd of around 50 students, alumni and faculty mentors at the conference. “I believe one way I contribute to academia is through my own experience as an American Indian transgender woman; that perspective is not always reflected in the scholarship we read, and that’s what inspires me to keep going.”

According to AISSS Acting Director Laura Gonzales-Macias, more than 3,000 Native American students were enrolled at ASU in 2018, many of whom are in The College’s 23 schools and departments. Over 500 are working toward doctorates or master’s degrees.

She said the number is continuing to grow and already significant, particularly by national standards — Native Americans make up less than 1% of U.S. college students and are represented even less in graduate programs.

Several initiatives aim to bring more young people into the fold and support them once they arrive, but fewer exist at the graduate level.

Graduate Pathways was designed to bridge the gap.

“There are many challenges involved in being a Native American student, one of them being that often you are the only one in the course,” said Gonzales-Macias, who is also an instructor in The College's American Indian Studies program. “I think it is particularly important at the graduate level for these students to hear what the climate is like for indigenous students and how they can continue navigating such a large institution.”

The two-day training includes resume and personal statement workshops and one-on-one mentorship sessions with faculty from the degree programs students are interested in. Perhaps most importantly, Gonzales-Macias hopes participants walk away feeling like they’re not alone. It is a sentiment she remembers being a vital step of her own psychology graduate track at The College, in 1992.

“Coming to ASU back then, it was not as diverse a place as it is today,” she said. “I was far from home and family, a first-generation student and by then, continuing onto my doctorate — connecting with fellow Native graduates was my saving grace.”

Now in its fifth year, Gonzales-Macias says the program comes full circle when alumni like Jackson return to give today’s prospective graduate students a unique insight into what’s next.

“Bringing back former participants lets new students see that someone else has been in their shoes,” she said.

That was the case for Rodney Aguilla, a Tohono O’odham tribal member who came to Graduate Pathways to learn more about advanced programs in fields spanning American Indian studies, law or teaching. Growing up in Three Points, Arizona, southwest of Tucson, Aguilla saw getting an education as a way to give back to the sister who raised him.

“My sister always told us that education is the key to the world,” he said. “She literally saw me go from dropping out of high school, to getting my GED, and finally, to coming here — she did a lot to help push that forward.”

He transferred to ASU from Tohono O’odham Community College last May to pursue a bachelor’s degree in American Indian studies and a minor in history, both from The College.

He said being homesick and away from family made coming to ASU difficult at first. Hearing from current graduate students at the conference made him feel like he was on the right track.

“I think as Native students, we all kind of have that extra weight on our shoulders to come back and do something for our tribe,” he said. “Meeting other students and learning from their experiences really helped, I hope to one day be here too, putting on these programs for others who come after me.”