Daniel Bernard Roumain’s work as a composer and performer focuses on fostering awareness of and conversations about complex social issues. An Institute Professor in Arizona State University's Herberger Institute for Design and the Arts, Roumain pays attention to conversations, controversies and resulting confrontations within our culture with the aim of bringing about change.

In January 2019, Roumain became the first Haitian-American composer to receive the American Academy of Arts and Letters Goddard Lieberson Fellowship Award, recognizing him as “a mid-career composer of exceptional gifts.” In 2018, he was awarded the Arthur L. Johnson Memorial Prize from the Sphinx Organization as an educator who transforms lives through his commitment to excellence and youth advancement. 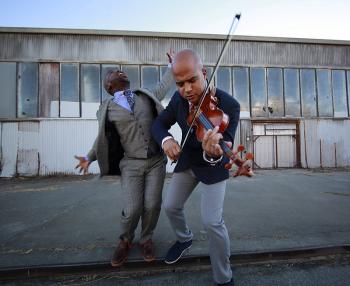 In the words of Anthony Tommasini’s favorable review in The New York Times, “… it was the raw, cry from the soul new work, ‘The Just and the Blind,’ that has stayed with me from my marathon ... a 60-minute piece by the spoken-word poet Marc Bamuthi Joseph, with music by Daniel Bernard Roumain. … Is this classical music? Perhaps not by traditional definitions. But it speaks to where Carnegie has come that it fit in at the hall just as well as the Vienna Philharmonic.”

The new work was part of Carnegie Hall's 125th anniversary commission project in which Joseph and Roumain were invited to write a piece for Create Justice, a national initiative founded by Carnegie Hall and the Arts for Incarcerated Youth Network, which leverages the power of the arts for youth justice and reform. Create Justice, in collaboration and conversation with Carnegie Hall, commissioned the work with the support of The Andrew W. Mellon Foundation, The Kresge Foundation and a few other sponsors.

Roumain said the “very, very innovative” 75-minute piece features spoken-word artist Joseph, Roumain on violin and piano and ballet/flex dancer Drew Dollaz “doing this kind of combination of hip-hop and Martha Graham ballet dance on pointe.” Singer and Sony artist Somi, who was born in Illinois to parents from Rwanda and Uganda, also appears in the work, singing two songs Roumain wrote for her.

A parallel project to the work called "About Face"— a six-minute narrated online video that includes aspects of the live performance and a soundtrack created by Roumain —was also produced, in collaboration with YAKfilms.

The creative process for the work began at ASU, Roumain said, when he and Joseph spent two days talking about the piece and coming up with ideas. Roumain started playing some ideas and Joseph started videotaping the ideas on his phone — ideas that not only ended up in the piece but became the first sounds the audience hears.

Roumain said he was excited that students from the Herberger Institute for Design and the Arts Curb Creative Enterprise and Cultural Leadership class he co-teaches were able to attend the Carnegie Hall premiere, along with Johanna Taylor, assistant professor in The Design School. The students visited the Apollo Theater, the Brooklyn Academy of Music and several New York City arts organizations, and also attended a dinner with an array of New York City artists including ballerina Misty Copeland, who talked at length with the students.

Students from Roumain’s DBR Lab, a Project Based Learning course open to all undergraduate and graduate Herberger Institute students, also traveled to New York and had the opportunity to see Roumain’s Carnegie Hall performance.

Roumain and the DBR Lab students recently returned from another trip to New York, where the group performed an evening concert at the internationally recognized arts space National Sawdust.

As part of the DBR Lab course, students begin or complete a project that is published and/or performed by the end of the next semester. The students develop the project concept and design with Roumain offering guidance, supervision, mentorship, networking and other opportunities for growth.

“I hope I am managing to lead the conversation by example,” Roumain said. “I think it's important that student contributors, faculty and staff can literally see a colleague creating work that is relevant, sometimes controversial, high quality and part of an international dialogue. I think it's important that faculty, staff and students know that the innovations and the conversations that happen here all the time every day can end up somewhere that can make a difference.”

Advances in technology make modern living easier, from improving communication to creating new tools such as the internet and smartphones; these technological improvements are now being applied to interventions. 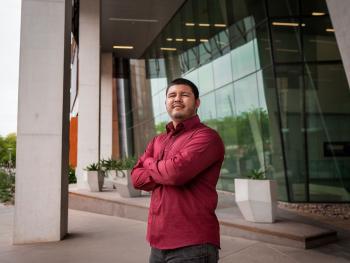 “One of the cornerstones of resilience is social relationships. Our ability to communicate with and rely on other people helps us immensely with being resilient through adversity,” said Castro.

The research featured an online social intelligence training program that centered on improving social emotional regulation. Previous research had shown a strong association between social functioning and physical and emotional health. People who have better social engagement typically live longer and have less anxiety and symptoms of depression.

Related: Taking the message ‘It’s OK to not be OK’ global

“If you can target improving social relationships, we think that it will have downstream effects later on, such as better physical and mental health. We wanted to design a program around this idea,” said Castro.

The intervention is an online course that was developed by ASU Foundation Professor Alex Zautra and his wife, Eva, and has seven modules that each cover a particular topic, such as neuroplasticity — all centering on the concept that with effort you are able to adapt and change aspects about yourself. They were designed to be done at the participant’s own pace and on their schedule, which was made possible through its online delivery.

Rather than bringing strangers together, the research team allowed participants to test the principles out in their own lives, with the intent of actually using the intervention. Following each module, each participant would be presented with a task to go and apply the behavior in their own environment in the real world.

“It is really important to take the knowledge we get from research and apply it to people who can benefit from it,” said Castro.

“We were able to show evidence to suggest that facets of social relationships can be improved through intervention. Our ability to deliver the intervention via online methods can enable its widespread use and accessibility,” said Infurna.

Cady Berkel, associate research professor in the ASU Department of Psychology, in collaboration with Velma McBride Murry of Vanderbilt University, also recently published information about the Pathways for African American Success (PAAS) intervention in the Journal of Pediatric Psychology. The digital intervention was an adaptation of the Strong African American Families (SAAF) program developed by McBride Murry and her colleague Gene Brody at the University of Georgia, where Berkel conducted her graduate work.

The SAAF program reduced the risks of substance use and sexual risk behavior among rural African American families by promoting parents’ use of positive racial socialization. Despite its success, attendance was a challenge for families. Many of the participating families had members who worked jobs that had unpredictable shifts, making consistent attendance a challenge.

“We wanted to pursue using technology to implement the program to try and reduce attendance issues,” Berkel said.

Initially, Berkel said the efforts to translate the programs from in-person to e-health interventions were met with skepticism. Few thought rural African American families would use a technology-based intervention, especially one that was game-based. Berkel and Murry conducted extensive ethnographic research in rural African American communities and found evidence supporting their efforts.

According to the National Center for Education Statistics, in 2015 about 88% of eighth graders and 83% of fourth graders reported using a computer at home. A Pew Research Center survey also found that in 2016, more than 67% of U.S. seniors age 65 and older use the internet and 51% used the internet at home. Another Pew Research Center study in 2018 found that even among those with an income lower than $30,000 per year, 82% still used the internet.

“Not everyone had a computer in their home, but they all had access to a computer, either at a library, at school or in a friend’s house,” Berkel said.

There were three groups in the study: a control group that was sent materials about youth development, a group that met in person and a group that used the e-health version. The researchers used the computer game “The Sims” as a model for how they wanted the technology version of the program to look, complete with customizable avatars. The e-health intervention was similar to the in-person group setting, in which participants learned strategies for supporting their adolescents and discussed how to talk with them about sensitive topics such as sex, drug use and discrimination.

“We wanted to answer two questions about the digital version,” Berkel said. “Can we really get families to engage? Will the effects of the intervention be different?”

The researchers found the families did engage. Families in the e-health group attended more sessions, and they showed better improvements for sensitive topics like discrimination, sex and substance use.

“We often see extended kin raising children. We also wanted to know, can we engage older people with a computer-based intervention?” Berkel said. “Grandmas were more likely to attend the technology sessions, and that was really cool.”

Even though the attendance was best in the e-health group, the in-person intervention group reported better improvement in communication and support for adolescents. Berkel said this finding leads her to believe that a hybrid model that combines technology with traditional in-person methods, similar to ASU’s New Beginnings Program, might be the best bet moving forward.